I was very happy to join Women Affirming Life for their annual Advent brunch and gathering at the Pastoral Center on Saturday morning. 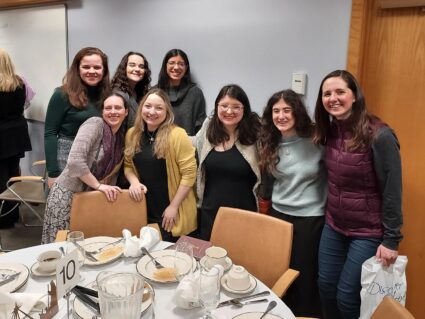 I celebrated Mass for them in our Bethany Chapel, and afterward, we gathered upstairs to hear a talk by Ester Munt-Brooks of the Catholic women’s organization Fe, Valor y Alegria. 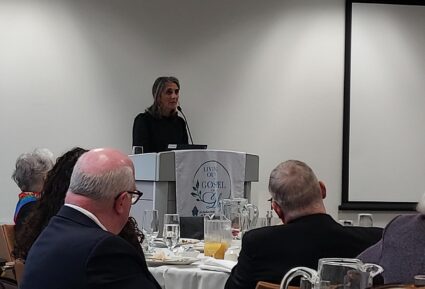 It was an excellent talk that, in a way, dovetailed with my homily.  I had spoken about the fact that people welcome children when they have hope, and she continued the theme, addressing what the nature of hope is.

We also had the opportunity to watch this wonderful video designed to help parishes promote our upcoming January Holy Hours for Life.  It was prepared by three seminarians from Pope St. John XXIII National Seminary — Giris Azize, Greg Zingler, and Greg Dougherty — as part of their field education with the Pro-Life Office. I think they did a fabulous job with it.

That evening, I went to the TD Garden to attend a Christmas concert by Andrea Bocelli, who was joined in the performance by his son Matteo and his daughter Virginia.  Needless to say, their voices were as beautiful as their father’s. 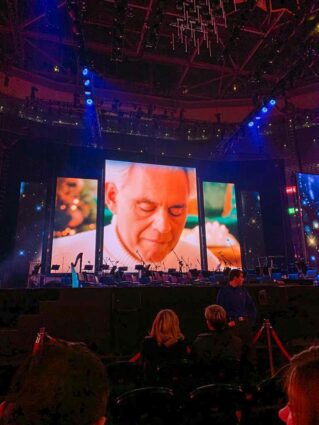 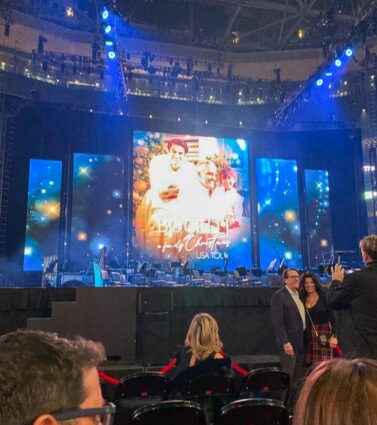 Afterward, I had an opportunity to greet them. 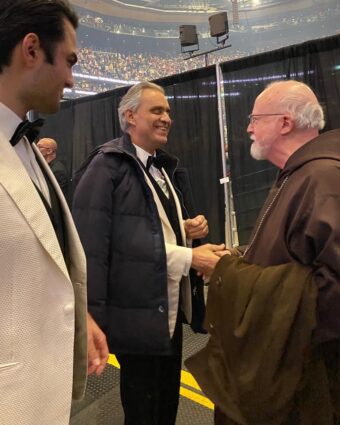 When I got home, I went online to learn a little bit more about Andrea Bocelli’s story.  Among the things I found is that his strong pro-life commitment comes from the fact that doctors urged his mother to have an abortion when it was realized that he was going to be born with “some disability.”  I thought to myself: If those doctors had prevailed, that concert attended by 40,000 people, that beautiful music and those lovely children who were singing with him would never have happened.  What a tragedy that would have been!

Then, on Sunday morning, the Mass.  State Council Knights of Columbus joined us at the 11:30 Mass at the cathedral for their annual Culture of Life Mass.  It was wonderful to see so many of our Knights for the Mass, including State Deputy Tom Butler, Deputy Supreme Knight Paul O’Sullivan and State Executive Secretary Russell Steinbach. 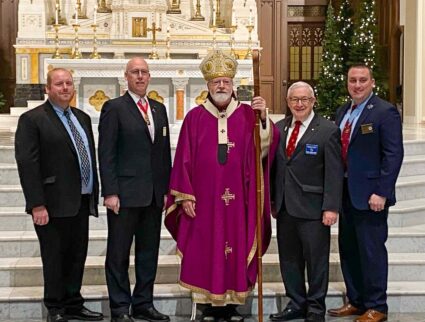 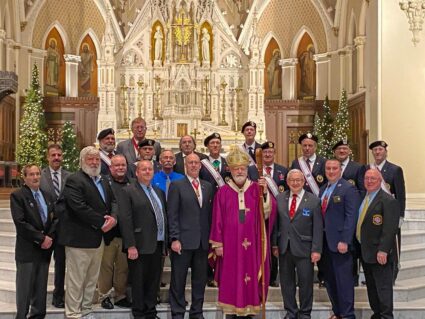 They were also giving out coats to those in need, which is one of their Advent works. 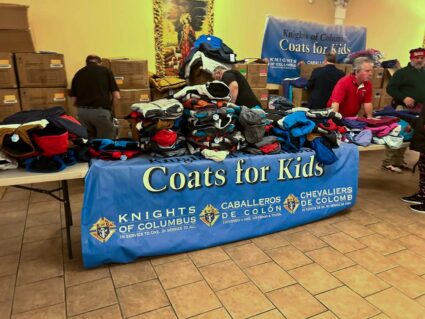 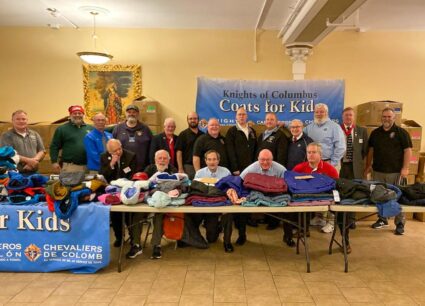 In my homily, I shared what I had experienced with the wonderful concert and the fact that Andrea Bocelli’s mother had chosen life.  On the way out of church, a family came up and thanked me for my homily and introduced their son, whom the doctors had also urged them to abort.  It was very moving to hear their story.

So, as you can see, it turned out that my weekend had a very pro-life theme.  And I’m very grateful for that.

Sunday afternoon, I went to St. Benedict’s Parish in Somerville for a Mass at which we blessed the recent renovations to the parish.  Celebrating with me were Father Alejandro and Father Nicanor. 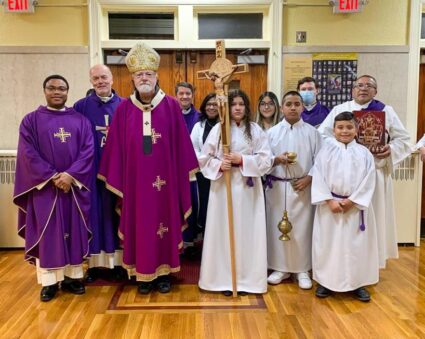 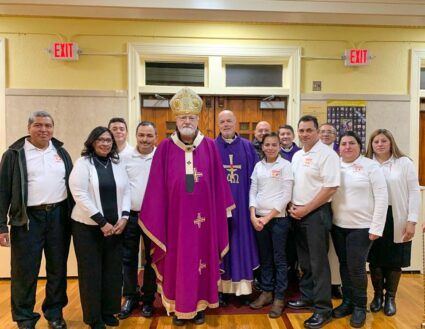 The church looks beautiful, and they have made many improvements, including new floors, and a new pulpit and confessional.

It was a joy to be with the parishioners as they celebrated this very impressive achievement. 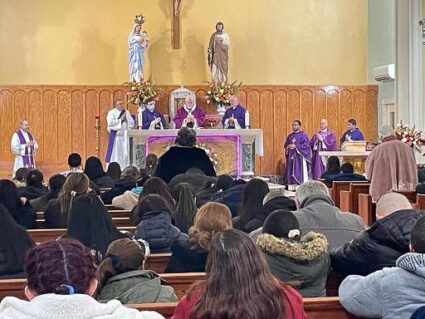 Monday, I visited Cristo Rey Boston High School for a prayer service for the Feast of Our Lady of Guadalupe.  I hadn’t been to Cristo Rey since before the pandemic, so it was very good to be back.

At the prayer service, they had students from different countries pray the Hail Mary in their own language.  Then, one of the teachers gave an explanation of the story of Our Lady of Guadalupe in Spanish. 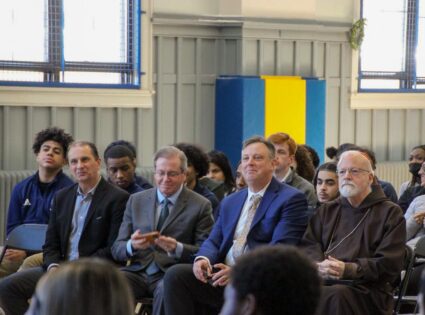 With Principal Tom Ryan and our own Tom Carroll 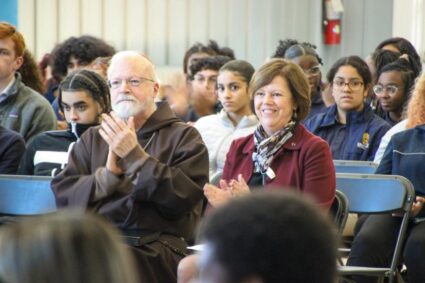 I also gave a talk about how Mary has made herself present to different peoples and cultures throughout history. 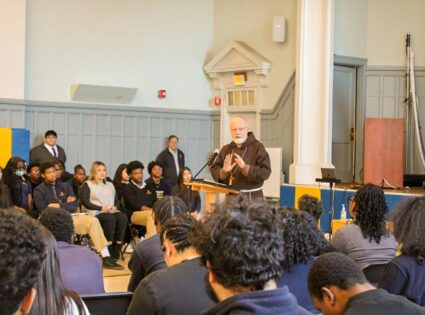 We are blessed to have two Cristo Rey model high schools in our archdiocese, Notre Dame Cristo Rey in Lawrence and, of course, Cristo Rey Boston.

As part of this model, the students attend class four days a week and then spend one day a week working at a local business.  This not only helps them fund their education, but it’s also an excellent way of preparing these young men and women for life, teaching them how to act in the workplace.  The success of this model is shown in the very high percentage of students who go on to graduate from college. 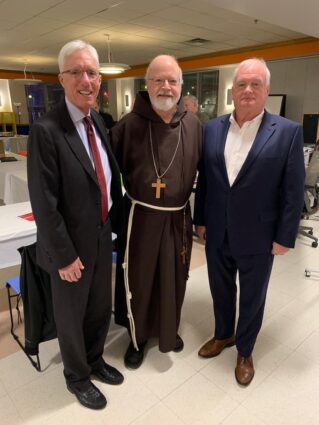 With Kevin and Mark

For the past three years, Kevin McKenzie has been serving as both president and CEO and chair of the board, and we are grateful for Mark’s willingness to step into this role.

We have a very active board comprised of dedicated and invovled community leaders who contribute so much of their time and energy to making Catholic charities the success that it is.  Catholic Charities has developed an excellent strategic plan, doing so much to aid immigrants and refugees, combat food insecurity and assist homeless families.  So, we are very grateful for all the work that they do.

On Tuesday, I was visited by Father Paul Denizot, the rector of the Shrine of Our Lady of Montligeon in Normandy, France.  He came to speak with me and acquaint me with their work. 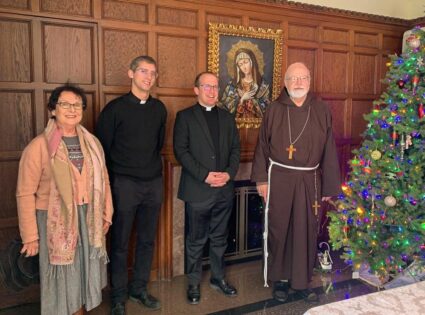 This is a Marian shrine where they have a tradition of praying for the souls in purgatory and bringing comfort to those who are grieving.  They have a small religious community at the shrine, but they also have prayer groups all over the world.  It was interesting to learn about this very inspiring ministry.

Wednesday, we had a meeting of the Board of Trustees of St. John’s Seminary. 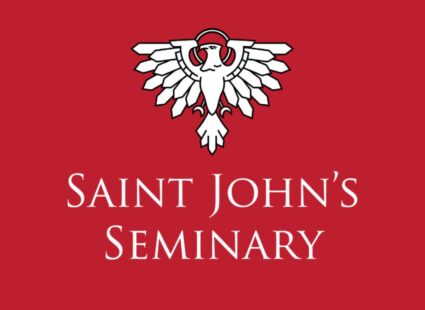 It was our first meeting since the passing of Bonnie Rodgers last month. 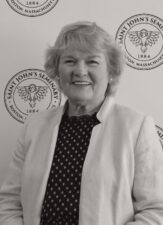 Many knew Bonnie for her work at CatholicTV, but she was also very involved in many other aspects of the life of the Church, including being a great supporter of the seminary.  She will be sorely missed, and we offer our prayers for her, her husband Dennis, and their family.

And while we were very sad to lose one of our long-time members, the meeting was also an occasion to welcome Bishop Mark O’Connell to the board in his new role as the incoming Vicar General.

One of the topics we discussed at the meeting was the introduction of a propaedeutic year into seminary formation and how that will be implemented.  As I’ve mentioned in the past, one of the new requirements of the Holy See is that seminarians have a period of spiritual and human formation as they begin their seminary experience, something akin to the novitiate of a religious order.  Though it’s a very long word, “propaedeutic” simply means preparatory or introductory instruction, so this time is referred to as a “propaedeutic year.”

In fact, on Thursday, we had a meeting of the Presbyteral Council, and Father Salocks also joined us to explain to the priests what the new format for seminary formation will be with the introduction of the propaedeutic year.