As some of you may know, I have been in Rome this past week.  I arrived on Saturday, and on Sunday, we had a meeting of the Council of Cardinals in preparation for our gatherings with the Holy Father beginning the following day.

We held our meeting at the Teutonic College, which is by the German cemetery in Vatican City, right next to St. Peter’s Basilica.  It was originally a pilgrim hostel founded by Charlemagne, and now it is a college for German-speaking priests and seminarians. 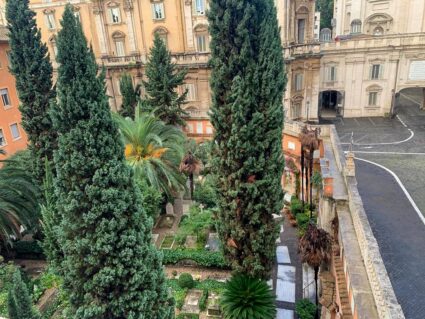 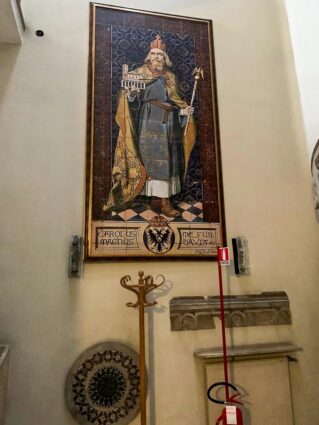 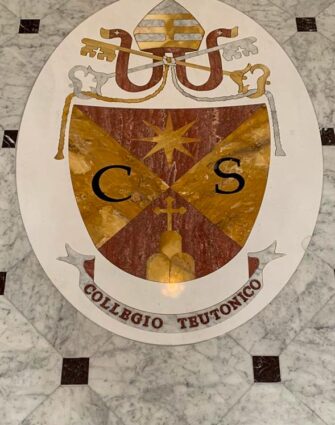 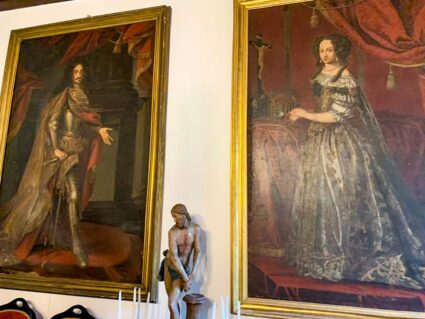 This is the time of Advent when Romans begin putting up their Christmas crèches.  It was beautiful to see them all around the Vatican. 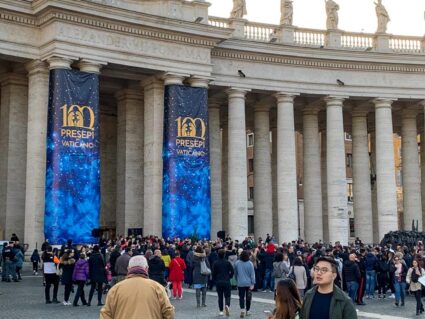 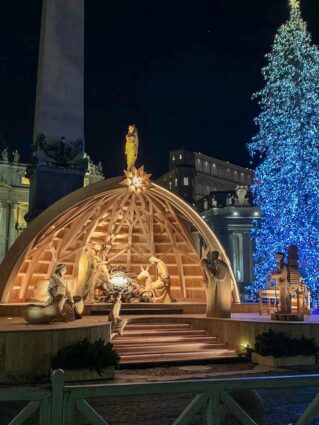 The crèche in the Plaza 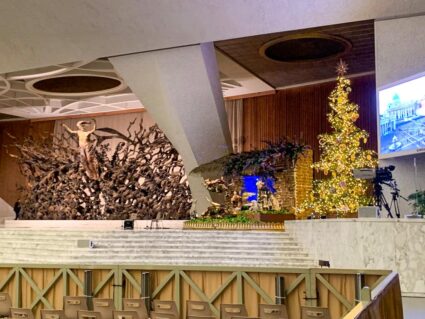 The crèche in the audience hall 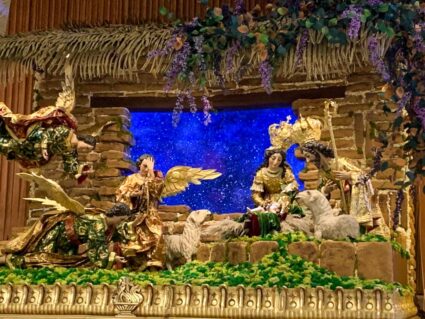 Also, the lights on the Vatican Christmas tree this year are quite elaborate!

Monday, we began our meetings with the Holy Father.  Among other issues, we discussed the meeting on climate change in Egypt as well as preparations for the Synod on Synodality.

I also had the opportunity to report on the progress of the works of the Commission for the Protection of Minors, and Cardinal Gracias shared highlights of a recent conference of Asian bishops that was held in Bangkok in October.

That day, we also attended a Memorial Mass at St. Peter’s Basilica for Cardinal Richard Baawobr of Ghana, who had just been made a cardinal in August.  When he came for the consistory, he experienced heart problems and died very unexpectedly last week. 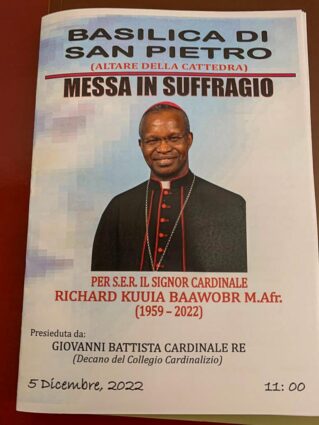 So, there was a Mass for him celebrated by Cardinal Giovanni Batista Re with all the cardinals in Rome at the basilica, and the members of the Council of Cardinals were part of that.

While our meetings with the Holy Father continued, on Tuesday, I also had the opportunity to attend the ceremony where Cardinal Adalberto Martinez took possession of his titular church, the Basilica of San Giovanni a Porta Latina.  It is beyond the ancient Baths of Caracalla, which are now one of largest open-air theaters in the world where the Italians hold their summer operas. 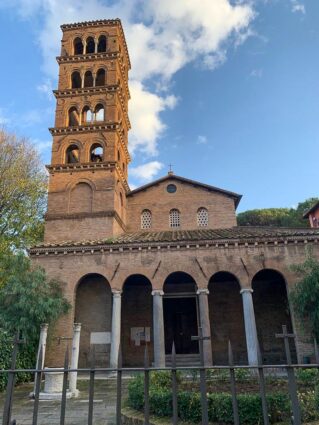 On the way, we also passed the Temple of Vesta, one of the older Roman temples still intact. 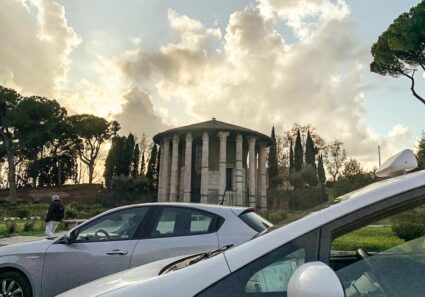 The basilica dates from the 3rd century and was built over the spot where tradition says they tried to execute the Apostle John by boiling him in oil (as you can see from this stained-glass window.) 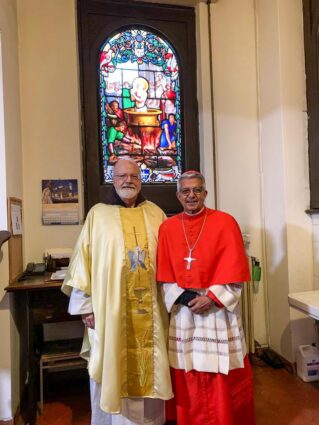 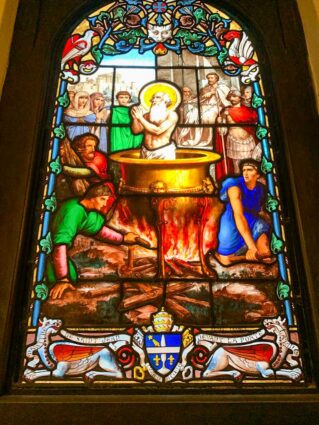 It’s a lovely church that is under the care of the Rosminian Fathers. 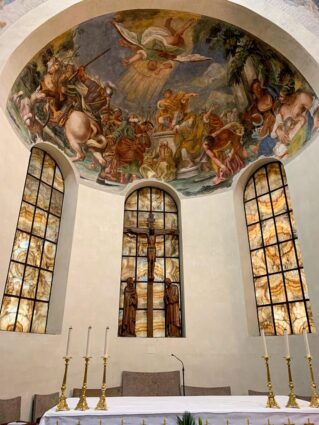 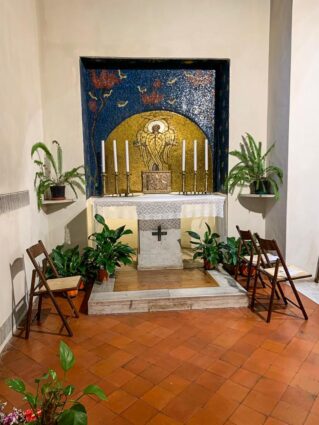 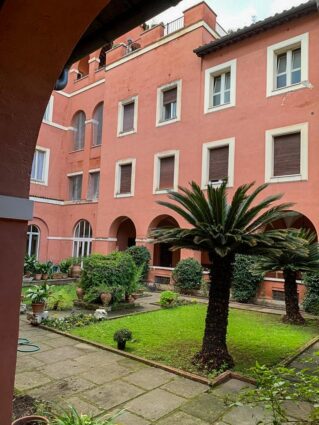 The courtyard of the Basilica.  The pink building is the generalate of the Rosminian Fathers

Of course, there were many priests and people from Paraguay with us. 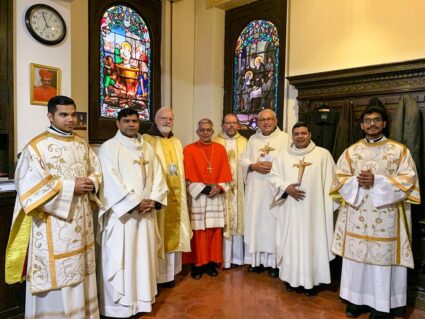 One of whom was a priest who works in the Secretariat of State.  He is from Croatia, but he was at the embassy in Paraguay when I made my trip there in 2010.  He traveled with me in this small plane when we went to San Pedro. 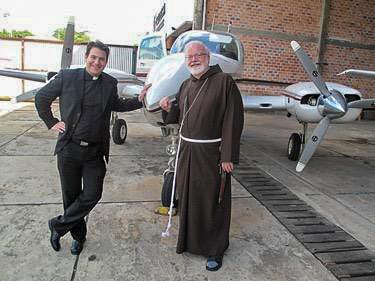 Of course, regular readers know that Cardinal Adalberto was one of my parishioners in Washington and that I ordained him a deacon and a priest and was a co-consecrator at his episcopal ordination.  So, it was a great thrill to be present when he took possession of his titular church.

Wednesday morning, the Holy Father held his weekly general audience.  At these Wednesday audiences, newly married couples wear their wedding outfits and are given a special place in the audience. They often have an opportunity to greet the Holy Father, which is a very nice custom. 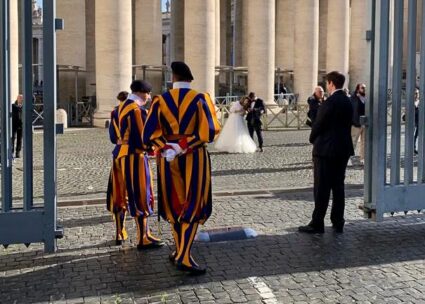 There are also always various musicians and bands, and this time there was quite a number. 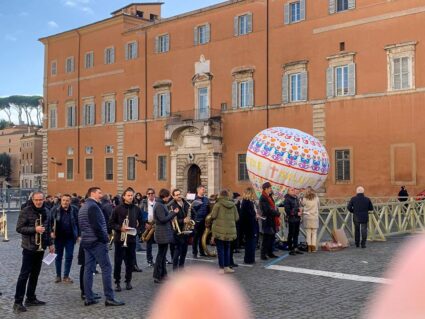 Thursday was, of course, the Feast of the Immaculate Conception, which is not only the patronal feast of the United States but also of the Pontifical North American College. 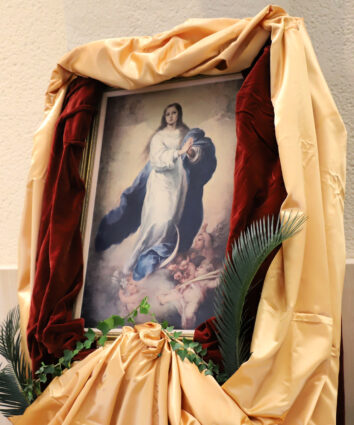 We gathered there for a Mass where Cardinal Jim Harvey was the principal celebrant and homilist.  There were a number of bishops and several dozen priests concelebrating with him.  I was happy to see the new rector, Msgr. Thomas Powers from the Diocese of Bridgeport. 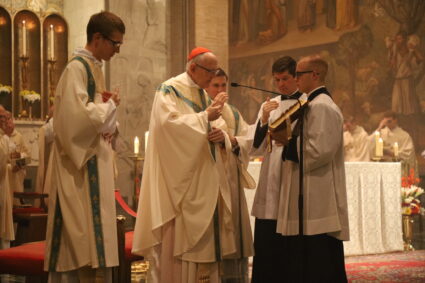 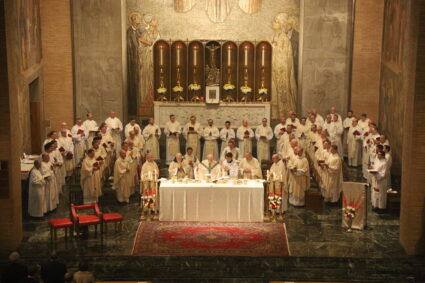 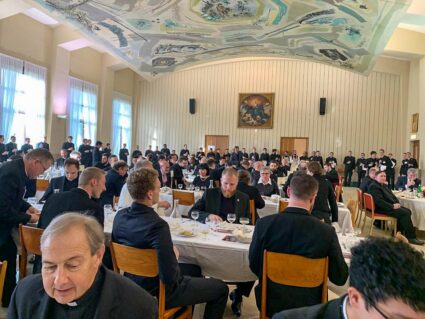 At the lunch, the students of the NAC have the tradition of making a toast to the Holy Father, to the United States, and to the seminary. 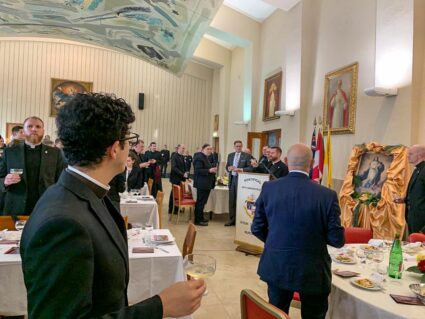 It was also very nice to see Father Jim Conn there.  He is a Jesuit who was a professor at St. John’s Seminary and is now the superior of Casa Santa Maria, the residence at the North American College for priests pursuing graduate studies. 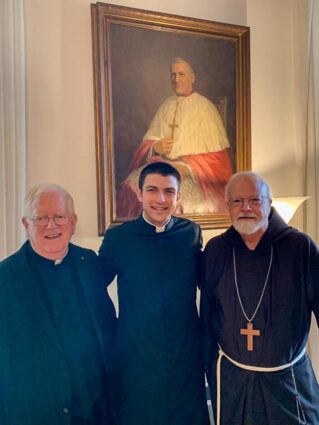