As is my custom, I am posting my blog a few days earlier than normal this week, so I can spend time around the Thanksgiving holiday with my family.

I want to begin this week saying how very saddened we were to learn of the passing of Dennis Looney.  His funeral was celebrated Monday by Father Bryan Hehir. Bishop Robert Reed represented me at the funeral since, as I mentioned last week, I had to return to Rome after the Fall Plenary Assembly of the USCCB. 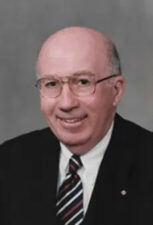 Dennis, his wife Marie, and his daughter Susan have been so involved in the life of the archdiocese for many, many years.  He did an extraordinary job in his leadership roles in the Order of the Holy Sepulchre.  He was a member of the Grand Magisterium of the Order of the Holy Sepulchre in Rome and was Lieutenant of the Northeast Lieutenancy here in the U.S.  He was a very dedicated man of faith and had a beautiful family and a long wonderful marriage to Marie.

Thursday night, I attended a banquet to celebrate the United Nations’ decision to inaugurate Nov. 18 as World Day for the Prevention of, and Healing from Child Sexual Exploitation, Abuse and Violence.

It was held at the Chiostro del Bramante (the Cloisters of Bramante), which is in the middle of Rome, not far from the Pantheon, and named for the architect who worked on St. Peter’s Basilica.  It was a very beautiful and interesting venue. 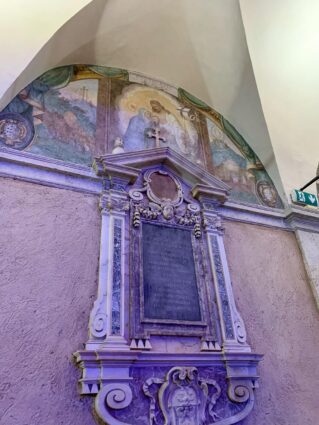 At the banquet, a number of people were honored for their role in child protection.  In particular, it was an occasion to honor and thank the First Lady of Sierra Leone, Fatima Maada Bio.  She herself was abused as a child.  So, she was very happy to promote the adoption of this day in the United Nations through her country’s ambassador. 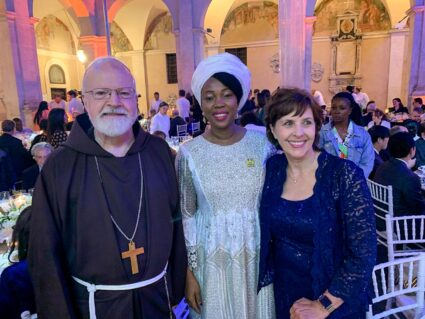 With Mrs. Bio and Jennifer Wortham. Both women were instrumental in helping establish the new U.N. child protection day 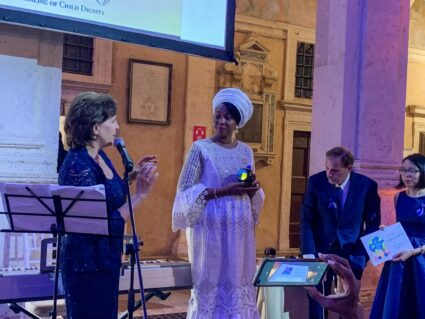 Among others honored during the evening were Dr. David Holland of Harvard University and Father Hans Zollner, who was also celebrating his birthday.  They presented him with a gift of a portrait of himself! 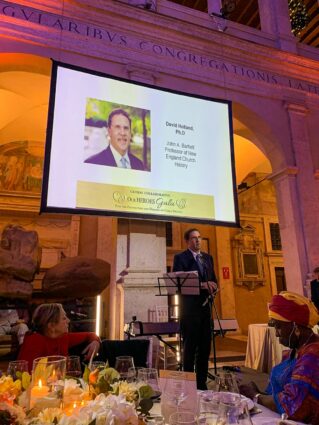 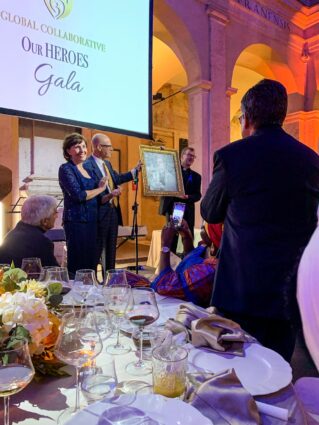 Friday was the investiture of Rabbi James Rudin as a Papal Knight of the Order of St. Gregory, which was held at St. Leo University near Tampa, Florida.  I was originally scheduled to come down to Florida for the investiture.  However, because of my commitments in Rome, I asked Bishop Mark O’Connell and Father David Michael to go in my stead. 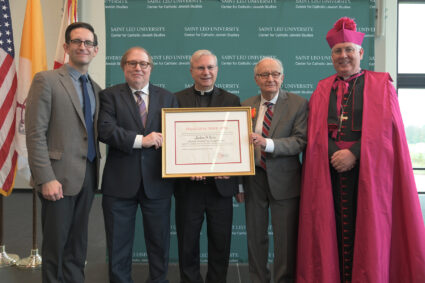 Rabbi Rudin is a man who, for 50 years, has been involved in Catholic-Jewish relations and has done so much to help foster interreligious understanding.  He is the American Jewish Committee’s senior interreligious adviser and was previously their Interreligious Affairs director.  He is also a distinguished professor of religion and Judaica at Saint Leo University and is co-founder of their Center for Catholic-Jewish Studies. 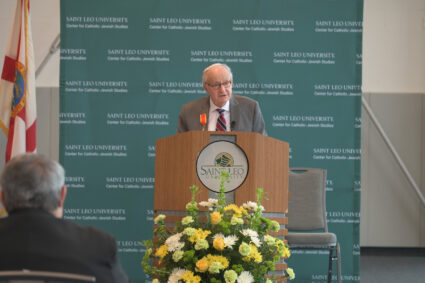 Although I was unable to be there, I was able to extend the greetings of Pope Francis, who is the one bestowing this knighthood on Rabbi Rudin.  Rabbi Rudin told me it was one of the most important moments of his ministry and that he was very moved by it.

Rabbi Rudin is only the third U.S. rabbi to receive this papal knighthood, and this is the second time I have been delegated to invest a rabbi with the Order of St. Gregory.  The first was several years ago at the Holy See’s Mission to the United Nations for Rabbi Leon Klenicki from Argentina, whom I had known when I was a young priest.

Last week, the German bishops’ conference was making their ad limina visit to the Holy See, and the Holy Father asked to meet with them all together, which he held on Thursday.  Then, on Friday, there was another meeting of the entire bishops’ conference with cardinals from the curia, and I was asked to be a part of that dialogue. 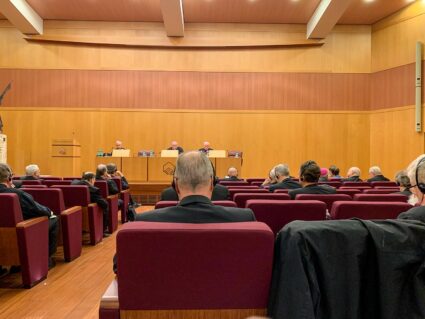 Friday afternoon, we had Mass with a group of survivors and others involved in child protection from around the world at Santo Stefano degli Abissini (St. Stephen of the Abyssinians) on the Vatican grounds.  This is a very ancient church and serves today as the national church of Ethiopia. 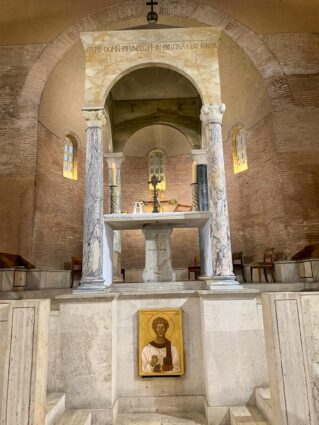 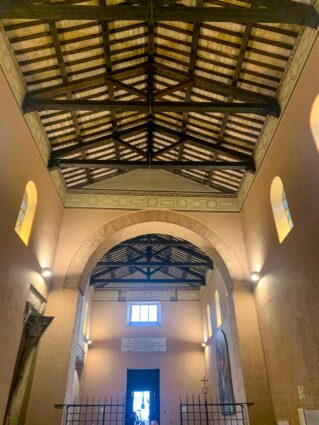 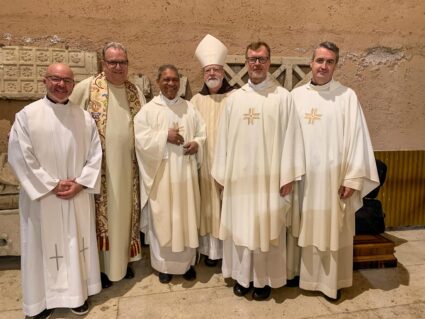 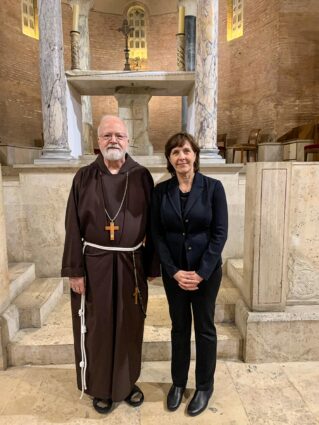 With Jennifer Wortham at the Mass

Saturday morning, I joined about 20 victim-survivors and child protection advocates for an audience with the Holy Father regarding the U.N.’s declaration of World Day for the Prevention of, and Healing from Child Sexual Exploitation, Abuse and Violence.

I presented Mrs. Bio to the Holy Father and also delivered some remarks on the significance of this moment which I’d like to share with you here:

We are grateful for this opportunity to be with you today.  I am pleased to introduce the members and supporters of the Global Collaborative, which is a survivor-led network of more than 50 child advocacy organizations, survivor networks, academic and faith-based and government institutions committed to ending child sexual abuse and supporting victims and survivors of childhood trauma in their healing.

Yesterday we marked the World Day for the Prevention of, and Healing from Child Sexual Exploitation, Abuse and Violence, established by the U.N. General Assembly earlier this month.  The people in this room helped bring about this important milestone in the fight against sexual abuse.  It is estimated that 1 in 4 women and 1 in 13 men have suffered sexual abuse in our world.  Our own Church, like many other religious communities, has sadly contributed to the horror of these sins and crimes.

Your Apostolic Nuncio to the United Nations General Assembly, Archbishop Caccia, supported members of the Global Collaborative during the recent passage of the U.N. Resolution in New York.

Over these days, we have gathered in person and online in a series of events to unite in the fight against child sexual abuse.  I am particularly pleased that we are joined today by the First Lady of the Republic of Sierra Leone, Madame Fatima Maada Bio, and we recognize her advocacy for collective action against the evil of sexual abuse in our world.

I want to say a particular word of appreciation to Ms. Jennifer Wortham, whose meeting with you in St. Peter’s Square several years ago served as a catalyst for her commitment in the fight against child sexual abuse and the care and protection of survivors.

Holy Father, you have constantly urged the peoples and nations of the world to come together in understanding and acceptance but also in love for one another.  You place that responsibility to build unity in a special way in the hearts of people of any faith and every faith.

Your own love and care for victims and survivors of sexual abuse has been an example to all of us that we cannot be shepherds of souls if we do not listen to and make space for those who have been harmed by the evil of sexual abuse.  We are here today to bring our love to you and to ask for your ongoing support and blessing.

Three of my brother Capuchins — Father Radek, Father Brian and Father Roberto — were in Rome for a formation meeting.  So, I invited them to lunch at the Domus Santa Marta and, afterwards, we went to visit St. Peter’s Basilica. 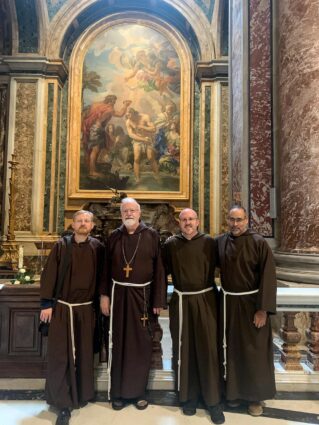 I once celebrated a baptism at the baptistery at St. Peter’s Basilica.  It was for the son of one of our lay missionaries who worked with us in the Virgin Islands. 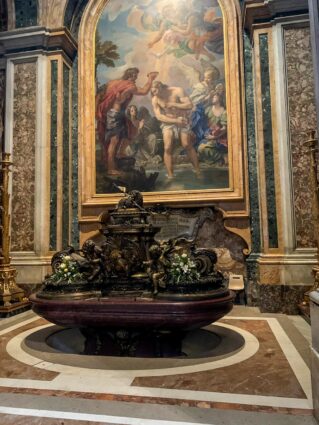 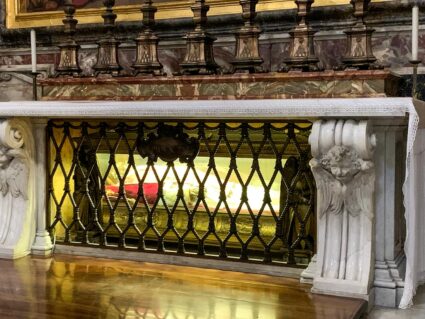 The tomb of Pius X

Tuesday, I had a meeting of The Papal Foundation to distribute funds for projects in Ukraine and in Latin America, many of which involve meeting very basic human needs.

I’m very humbled to be a part of this effort to support these projects in the name of Pope Francis, particularly to help some of the most needy people on the planet.

Finally, I want to conclude by wishing everyone a very happy Thanksgiving!

Thanksgiving continues to be one of the most religious observances in our American culture.  It brings families together and calls people to be thankful to God for the blessings of friends and family and those we enjoy in our country — freedom, prosperity and peace.    It is also a call for us to express our gratitude by sharing our blessings with others.

There is perhaps no better example of this spirit of sharing than that evidenced by the many, many staff members and volunteers who gave of themselves to help Catholic Charities and the United Way distribute more than 4,000 Thanksgiving meals to those in need around the archdiocese this past weekend. 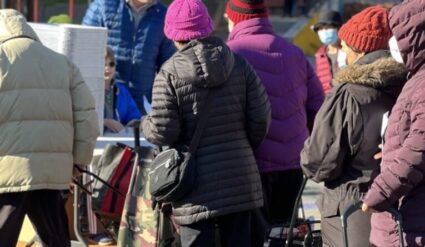 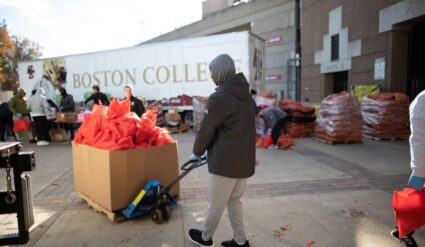 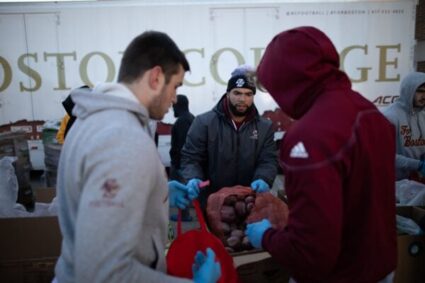 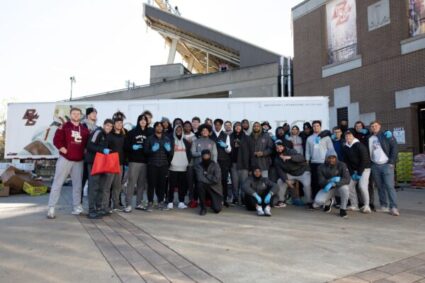 At this time when so many are in need, their efforts helped make the Thanksgiving holiday for countless families in the Boston area. Very are very, very grateful to them.