Training new bishops on the importance of child protection

As I mentioned last week, I am currently in Rome for meetings and activities connected with the Pontifical Commission for the Protection of Minors and the C-9 Council of Cardinals.

As I left off last week, the Commission for the Protection of Minors was in the midst of our meetings, which went from Thursday afternoon through Sunday.

We had a very productive session and the work of the commission goes on. In this gathering we addressed the Day of Prayer for survivors and victims of sexual abuse that the different bishops’ conferences are working to implement, the Holy Father’s Motu Proprio “As a Loving Mother”, and the upcoming launch of our new web page. Meanwhile, we continue to give trainings for bishops’ conferences and other Church leaders.

In fact, this week we were involved in trainings for the Congregation for the Clergy with Cardinal Beniamino Stella and his staff. Marie Collins, a member of the commission who is also a survivor, gave a beautiful testimony; Father Hans Zollner spoke about questions of formation in seminaries; I gave a general talk on the work of the commission and some of the issues around child protection; and finally Msgr. Robert Oliver, the secretary of the commission, was there to answer questions around issues of Canon Law.

We had a very good session, and after the introductory talks, there was a question and answer period with the members of the congregation.

Also, today, we addressed the group of about 150 new bishops who have been named throughout the year and are gathered in Rome this week. The programs were quite similar, though with the Congregation for the Clergy, we dealt much more with formation, because they are concerned with seminaries and ongoing formation. With the new bishops, I tried to stress the obligations that they will have on some of the issues addressed in the guidelines such as screening, reporting and trainings.

Among the group of new bishops are a number of Americans, including our two new auxiliaries, Bishop Robert Reed and Bishop Mark O’Connell. 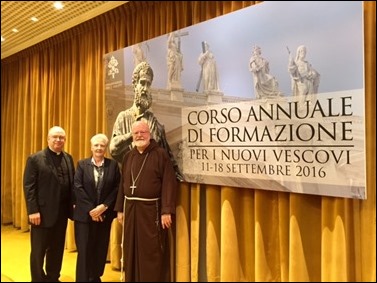 I would like to share with you an excerpt from my opening remarks at the presentation to the bishops:

I am appreciative for my fellow members of the Pontifical Commission for the Protection of Minors; Secretary Msgr. Robert Oliver, Marie Collins from Ireland and Father Hans Zollner, S.J.; participating in the presentations to long-standing and newly appointed leaders in the life of the Church throughout the world. 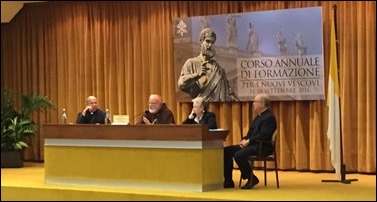 Thirty-two years ago, when I was named bishop, these programs did not exist. If there had been such programs, and they discussed child protection, perhaps our recent history as a Church would be much different. But we can learn from the mistakes of the past and put the Church on a new path, where the protection of children is the highest priority. No other topic is more important for the life of the Church. If the Church is not committed to child protection, our efforts at evangelization will be to no effect; we will lose the trust of our people and gain the opprobrium of the world.

We are particularly grateful to Marie Collins, a Commission member and herself a victim, for her contributions. It is very important that Church leadership meet and hear from victims, in order to begin to understand the seriousness of this situation, the need of the Church to protect children and vulnerable adults, and to minister to the countless victims of abuse inside and outside the Church. Marie’s care and concern for healing for victims and assurance that all that is possible will be done to prevent future occurrences of abuse in the life of the Church is a blessing for all of us.

As I said, our meetings of the C9 Council of Cardinals with the Holy Father began on Monday and ran through Wednesday.

We also looked at the role of Apostolic Nuncios, the work of the Pontifical Council for Promoting Christian Unity, the new Dicastery for Integral Human Development and the Secretariat for Communications. And we also had a report by Cardinal Pell on developments with the Secretariat of the Economy and I updated the group on the work of the Pontifical Commission for the Protection of Minors.

Though the meetings of the Council of Cardinals run through most of the day, we do still have to eat! So I like to take advantage of these breaks to see people I might not otherwise have a chance to, and in particular Boston folks who are in Rome.

On Saturday evening I was happy to join our group of Boston pilgrims who have been visiting Rome. 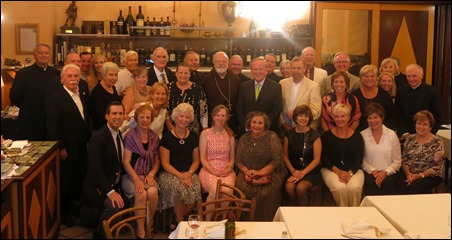 As I mentioned last week they made a trip to Assisi as well as Castel Gandolfo, and we can’t forget the Wednesday Audience last week out of which came that wonderful story about the potholder made by a young girl from Boston that was presented to the Holy Father.

And speaking of Saturday, I thought I would share this photo with you to point out the fact that during the Jubilee Year of Mercy, the Holy Father is holding a Saturday Audience once a month. 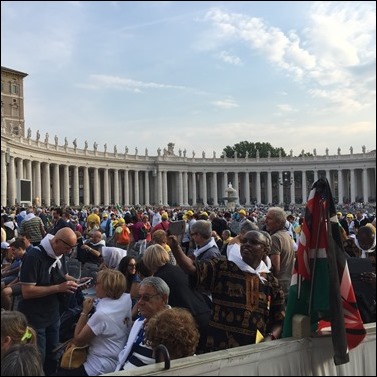 The crowds in Rome during this time have just been impressive. There was a huge crowd for the Wednesday Audience that the Boston pilgrims group attended, there was this audience, and the Child Protection Commission members attended the Angelus address on Sunday, which was also very well attended.

On Monday, I had a chance to have lunch with Archbishop Paul Russell who is from Boston and is the Apostolic Nuncio to Turkey.

We continue to pray for Archbishop Russell in his new assignment with all the many challenges at this time. We also pray for peace there and for the situation of the Church in the region where Christians are such a minority. Archbishop Paul remains very happy to be in the place where Pope St. John XXIII, who had such a high regard for the Turkish people, worked so diligently.

And, on Wednesday I had an opportunity to have dinner with Bishops Reed and O’Connell, our seminarians studying in Rome, and Father Dan Hennessey who is here along with Father Tony Medeiros to receive the new seminarians who will be studying at our Redemptoris Mater seminary. 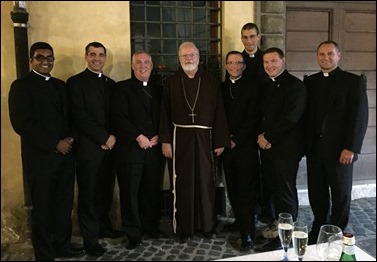