As I mentioned in my previous post, last Saturday, I celebrated the Funeral Mass for my aunt, Therese O’Malley, who was the wife of my late uncle, Dr. Ed O’Malley. 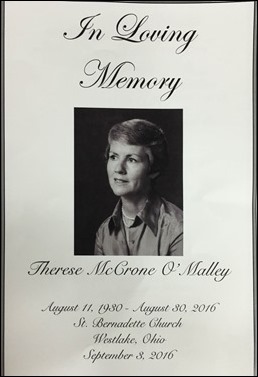 Many of my relatives were able to come together for her Mass, which was celebrated at St. Bernadette’s Church in Westlake, Ohio. 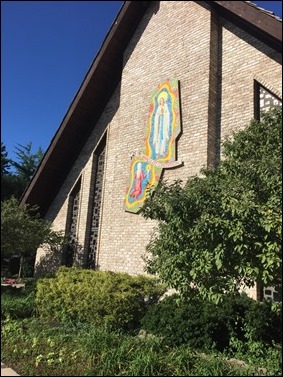 She was a very caring and loving person and an active Catholic who was very devoted to our Blessed Mother and to the Eucharist. She was also a person who was devoted to serving other people, which she demonstrated through her work as a nurse.

She was a very selfless and energetic person who touched our lives deeply. We are very grateful to her children and all those who took such good care of her during her long illness. 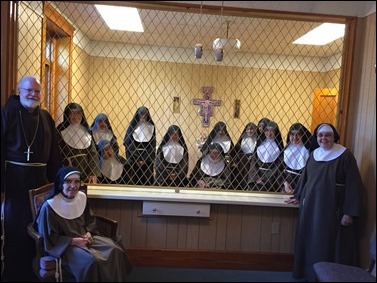 While I was in Ohio, I had a chance to visit the Poor Clare sisters

Not going to Rome allowed me to celebrate the Mass on Sunday with our own Missionaries of Charity and the parishioners of St. Teresa Parish in Dorchester. (I was very happy to see that they had already changed the sign out front of the church!) 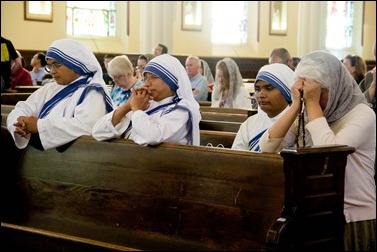 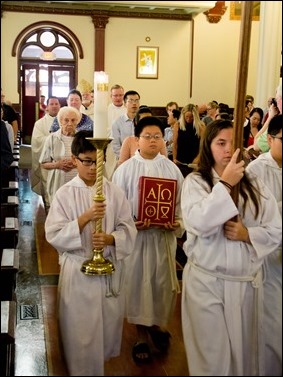 The pastor, Father John Currie, accompanied us at the Mass. 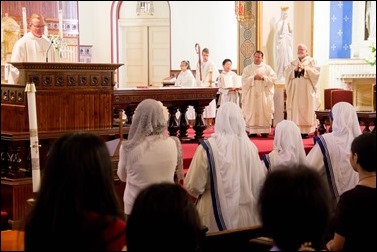 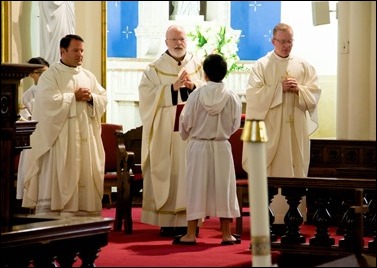 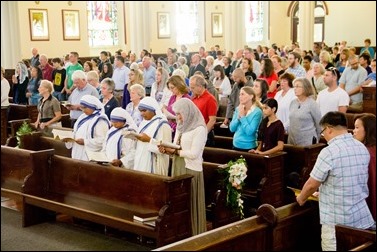 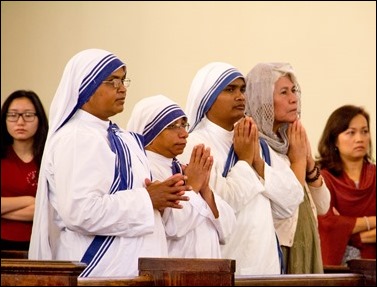 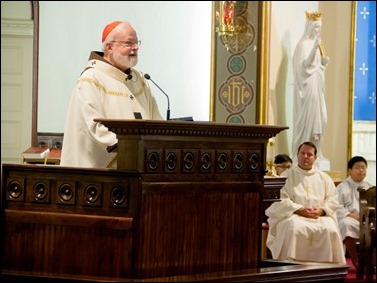 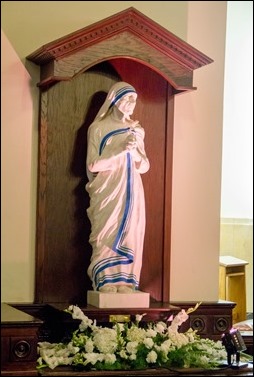 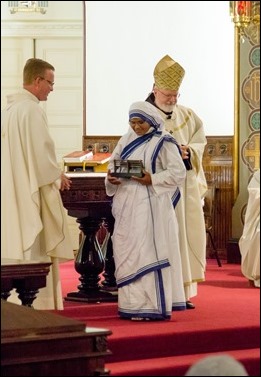 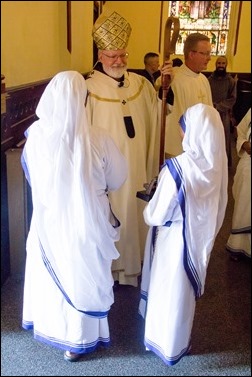 I was so pleased to see so many people from local media come to cover the Mass including WBZ radio, The Boston Globe and, of course, The Pilot. It was such a wonderful occasion and I am so pleased that they helped to share it with the people of our area.

Monday, I was visited at the Cathedral by Rose Patek, Msgr. William Fay and Father Richard Clancy, who came to speak to me about some of our efforts around campus ministry as well as a number of other pastoral issues facing the archdiocese. Rose is a very dedicated Catholic laywoman and one of the founding leaders of the Betania II Center in Medway, where we have had so many activities for the archdiocese.

Tuesday, I departed for Rome for a number of meetings, beginning with meetings of the Child Protection Commission. 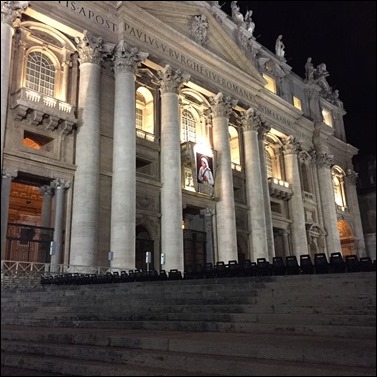 On Wednesday I had an opportunity to meet with our pilgrims from Boston who are visiting Rome. They are a group of about 35 people from the archdiocese led by Kathleen Driscoll and Pat Bertram and accompanied by Fathers Michael Drea, Chris Hickey, Jim Flavin, Nick Sannella and Ed McCabe.

During their time in Rome they have had an opportunity to visit the Vatican including St. Peter’s Basilica, the Sistine Chapel and Apostolic Palace, as well as several of the great basilicas in Rome – St. Mary Major, St. John Lateran and St. Paul Outside the Walls.

They also had a chance to attend the Holy Father’s Wednesday general audience, where one couple from Boston had a particularly nice experience that you may have read about in The Boston Globe. 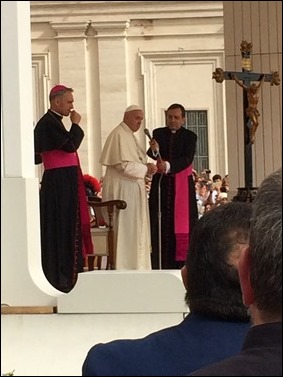 Maura and Laurence Naughton had brought a potholder made by their 9 year old daughter Megan as a gift for the pope. Well, it turned out that they got close enough that they could actually pass it up to the Holy Father, who seemed genuinely pleased and smiled when he received it. 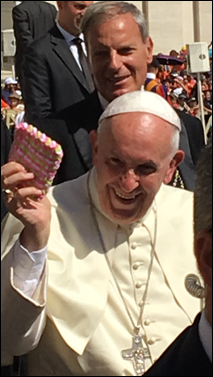 I know it was just such a thrill for the Naughton’s and their daughter, and a particularly nice gift for Maura, who was celebrating her birthday that day.

On Thursday morning I celebrated Mass with the Boston pilgrim group in the Hungarian Chapel, which is in the lower part of St. Peter’s Basilica, near the tomb of St. Peter. 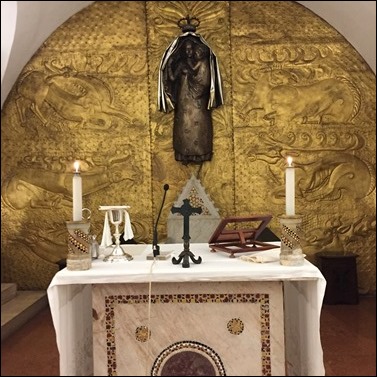 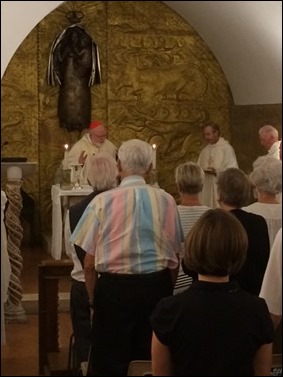 After the Mass, I joined them for breakfast. I also gave them a talk on Assisi, because they are visiting there today, and I’ll meet with them again tomorrow.

Thursday evening I was very happy to attend a reception for the new Australian Ambassador to the Holy See, Ambassador Melissa Hitchman. 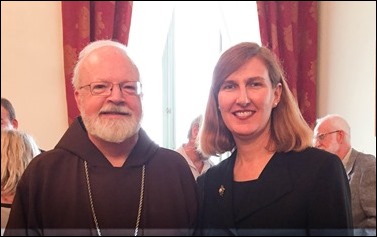 It was lovely to have an opportunity to meet her. 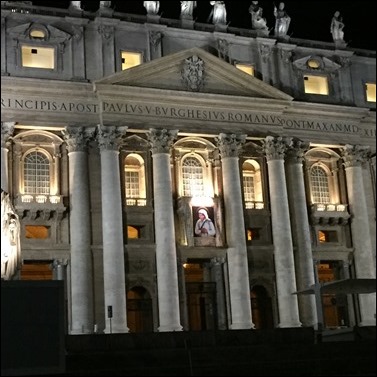 Finally, as I announced in my post last week, the relic of the heart of St. Padre Pio will be coming to the archdiocese in a little less than two weeks.

The schedule, which was printed in The Pilot this week, is as follows:

9 a.m.-5 p.m. at Immaculate Conception, Lowell. Veneration will be held throughout the day with Mass at noon.

7 p.m.-midnight at St. Leonard’s Church, North End of Boston. Mass will be celebrated at 7 p.m., followed by veneration until midnight.

9 a.m.-5 p.m. at the Archdiocese of Boston Pastoral Center, Braintree. Veneration will be held throughout the day with Mass at noon.

7 p.m.-midnight at The Cathedral of the Holy Cross, Boston. Spanish Mass will be celebrated at 7 p.m., followed by veneration until midnight.

Please spread the word and I look forward to seeing you all there!