This week, I produced a series of videos with CatholicTV on Ballot Question 4, the initiative to legalize the commercialization of marijuana that will be voted on in the upcoming election. The Church stands with Governor Baker, Mayor Walsh, the law enforcement community, the medical establishment as well as the ecumenical community in opposing this measure.

These videos have been prepared to illustrate some of the shortcomings of this legislation. I urge all of you to view them and share them with your friends, fellow parishioners and members of your community. 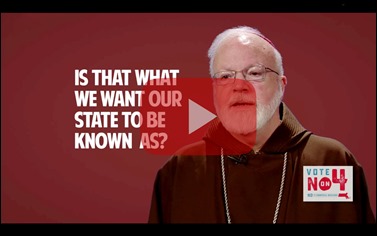 Also, I am pleased to announce that the Archdiocese of Boston has contributed $850,000 to the Campaign for a Safe and Healthy Massachusetts, which is working against this ballot measure, from unrestricted Central Ministry funds.

The contribution is a reflection of how seriously we consider this issue, understanding that, if passed, this proposed law would have a significant detrimental impact on our parishes and our social outreach and support ministries.

We operate extensive food pantries, health care clinics and counseling for the needy. The archdiocese provides extensive programs and services for people in economic despair and struggling with addictions, we sponsor housing for low income and homeless people, and provide assistance to newly arrived immigrants who are often subject to opportunistic manipulation due to their unfamiliarity with our society.

If Question 4 is approved, all of these programs and the people we serve will be negatively impacted.  Numerous studies in Colorado since marijuana was legalized there make clear that there is a substantial increase in the demand for emergency medical and counseling services  among the most vulnerable populations, limiting  the resources available for pro-active, productive assistance.

As an archdiocese, we are particularly concerned about the serious risks to youth that would follow the enactment of this proposed law.   We educate more than 40,000 students in our schools and have a presence in 144 cities and towns through our 289 parishes.   We hold our responsibility for the safety and well being of children and families as paramount in all that we do.  Numerous highly credentialed research studies have established the very serious damage to the physical, intellectual and emotional health of youth that is caused by marijuana use.  We hold as an important obligation to do all that we can to prevent this from occurring.

On Sunday, I went to Hopkinton to celebrate a Mass for the 150th anniversary of St. John the Evangelist Parish there. A number of priests who had been stationed in the parish were with us for the celebration, including, of course, Father Richard Cannon, the current pastor. 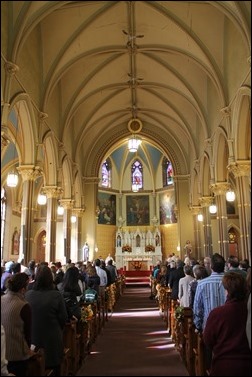 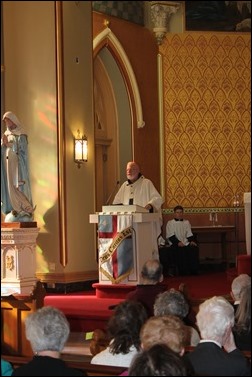 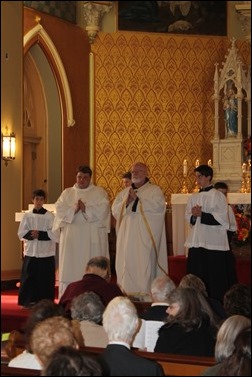 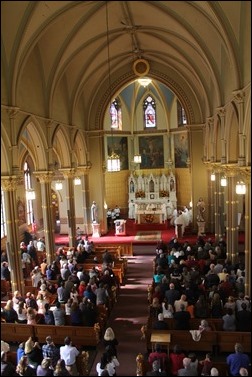 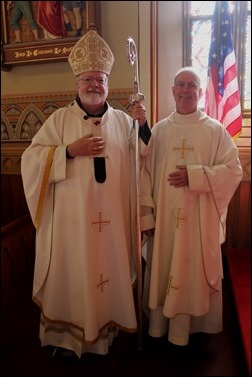 There was a wonderful music program and the choir was just extraordinary. 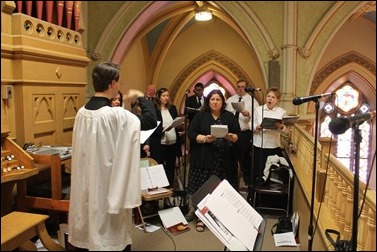 I was very interested in this history of the parish, which they call, “the Cathedral in the Woods”. 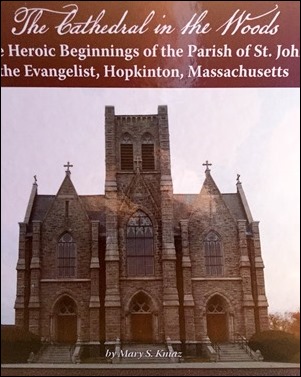 The founding pastor, who is buried in the parish, was an Irish-American from Roxbury but the parish, of course, sprang up at a time after the Famine when a number of Irish were coming from Ireland to the Boston area. There was a boot factory in Hopkinton where many of the immigrants were employed. 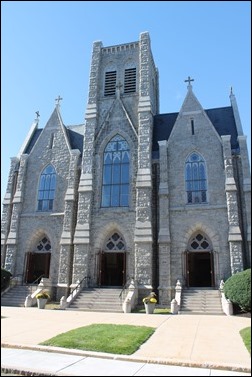 It is amazing that parishioners built this extraordinarily beautiful church, working on it themselves. After many hours of working at the boot factory, they would go to the local quarry and cut the stones that were used to build the church — and it is a stunningly beautiful building. It is a great tribute to the faith of the people who were there at such a difficult time. Today, the parish continues to flourish.

Later that day, I met with Archbishop Charles DuFour, who is the former Archbishop of Kingston, Jamaica and has been named the Apostolic Administrator of the Diocese of Mandeville there. (He had also been the Bishop of Montego Bay – so he’s now headed every diocese in the country!) 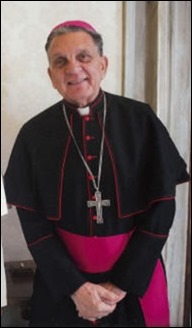 I first met him when he was a monsignor and the rector of the seminary in Kingston, and I was the visitator of the seminary. So, we’ve known each other for many years, and the visit was a chance to catch up on the news of the bishops’ conference of the Antilles, which I participated in when I was bishop in the Virgin Islands. The conference takes in all the English, Dutch and French islands plus Belize in Central America and Guyana, Suriname and French Guiana in South America.

I have many fond memories of being part of the conference and of the many fine men who served with us.

On Tuesday, I celebrated the funeral Mass for Msgr. Paul McManus at St. Joseph Church in the West End, which is just next-door to Regina Cleri. Msgr. McManus was the oldest priest in the archdiocese, having turned 100 years old last June. His nephews and their families were there with us along with quite a number of priests of the archdiocese. 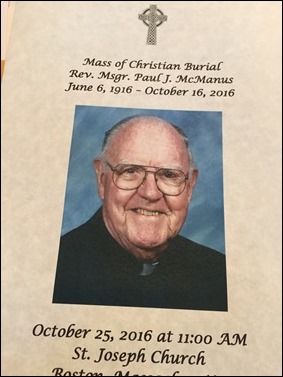 It’s amazing to think, in his long lifetime, how many changes transpired in the world and in the Church.

I was touched by the prayer card that they distributed, and my presumption is that he chose it himself. I felt it very much represented his spirituality and his kindness as a person. 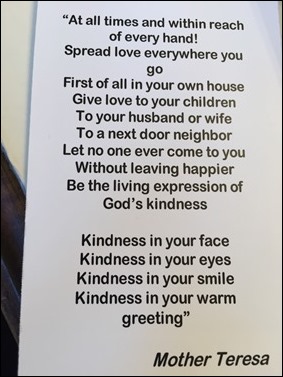 That evening, I went to Sacred Heart Church in Quincy for one of our periodic St. Andrew’s Dinners for young men considering a vocation to the priesthood. Father Lou Palmieri was our gracious host for the evening. 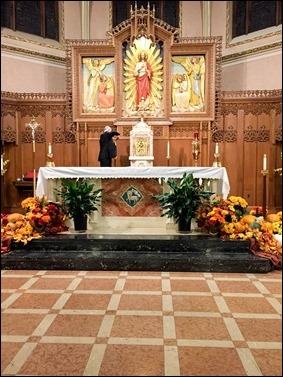 The idea of these dinners is to give young men who might be open to a priestly vocation an opportunity to hear about the experience of the seminarians and to meet the archbishop. The Vocations Office organizes a number of these dinners throughout the year. Many of them are held in the seminary, but sometimes we go out to the parishes to make it more convenient for people to attend.

We began with Vespers followed by a lovely meal that the parishioners prepared. Afterwards, three seminarians gave witness talks and I also addressed the young men, many of whom were accompanied by priests or other leaders from their parish. I think there were about 60 young men in all with us. 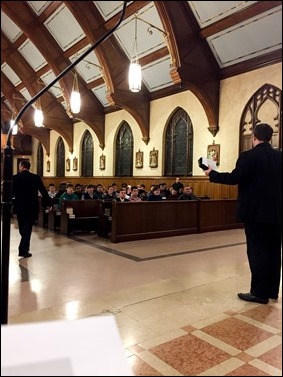 During the evening, one of the young men challenged me to the “bottle flip.” 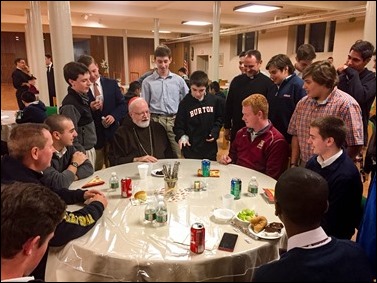 He did it very well, but I tried three times and failed each time!

Wednesday, I was happy to attend a meeting of the Board of Trustees of Pope St. John XXIII National Seminary in Weston. This was Father Kiely’s first meeting with us as the new rector.

We reported on the fact that the national vocation directors association recently had their meeting here in Boston, and it was an opportunity for many of them to see Pope St. John Seminary for the first time. We thought that it was very propitious that they would have an opportunity to meet the new rector and see the renovations to the chapel as well as the new library and communications center.

We hope that this visit will be a help in recruiting for seminarians for Pope St. John, which does such a marvelous job of preparing older men with vocations.

Wednesday night, I was happy to attend the Adopt-A-Student Foundation Dinner to benefit Cathedral High School. 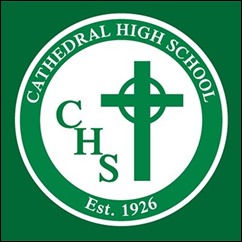 During the evening they honored me and Jack Regan, who has been very involved in supporting the school and has had an intern program for many years with the students.

There was a wonderful turnout for the dinner and, during the evening, they had two students and a graduate share their reflections with us. It’s always so inspiring to hear the stories of students.

When the school was founded 90 years ago by Cardinal O’Connell, they chose the cardinal’s motto as the motto of the school: “Vigor in Arduis” — “strength under adversity,” and that’s a good way to describe the school and its students. Despite all the challenges that they have, the students truly are excelling. We have had a 100 percent graduation rate in the last decade. What is more, 100 percent go on to college or university and, of those, 85 percent complete their degree, which is just amazing.

One of the statistics that I mentioned is that if a black youth attends a Catholic high school, they are eight times more likely to graduate from college. I stressed that no other institution in the United States has been more successful in moving people out of poverty and into the middle class than the Catholic schools.

The faith-based values and religious atmosphere is a very important part of the formation that they are receiving there. That is always borne out in the attitudes of Catholic school graduates, who are more engaged on social issues, more likely to go to church, more likely to vote and more likely to be comfortable with diversity.

The head of school, Dr. Oscar Santos, gave a wonderful talk in which he said that no organization in the world has educated as many people as the Catholic Church, and I would add that you would have to look far to see someone who is doing it better!