A week ago, as we were vesting for Pope Benedict’s funeral Mass, I greeted Cardinal George Pell, a longtime colleague on the Council of Cardinals.  Cardinal Pell, who died in Rome on January 12 at the age of 81, was a formidable man, physically, intellectually and in the multiple roles he fulfilled as a priest, bishop, and cardinal in Australia and the Roman Curia.

Appointed by John Paul II, he served as Archbishop of Melbourne and Sydney, Australia’s two largest cities.  Early in his papacy, Pope Francis appointed Cardinal Pell as Prefect of the Secretariat for the Economy, commissioning him to address serious and complex problems left unattended in the Church’s financial structures.  The Holy Father also appointed Cardinal Pell to the C-9, the circle of advisors created by the Pope to assist him in the governance of the universal Church.

When the Cardinal was accused in Australia of sexually abusing minors, I was deeply saddened but then relieved when his conviction was overturned by Australia’s highest court.  During his 404 days in solitary confinement, he maintained a quiet dignity.

A major characteristic of Pope Francis’s papacy has been the effort to listen to all voices in the Church.  Cardinal Pell was a man of strong convictions, stated often in private and in public.  Pope Francis was clearly aware of the Cardinal’s positions.  Those convictions inspired many and disappointed many.  He was a polarizing figure to some, but he will be sorely missed by his numerous friends in the English-speaking world.

May his soul, and the souls of all the faithful departed, through the mercy of God, Rest in Peace.

On my last night in Rome after the papal funeral, I was so pleased that the Paraguayan Ambassador to the Holy See invited Cardinal Adalberto Martínez and me to a reception at the embassy along with several members from the Paraguayan community in Rome. 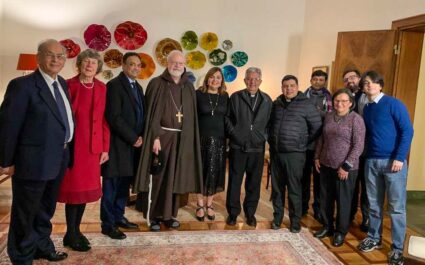 I also wanted to share these photos I received earlier this week, sent to me by Father Michael Nolan, who was with a group of young adults from Boston on a pilgrimage to the Holy Land and Rome.

While they were in Rome, Father Nolan arranged for them to have a Mass with Cardinal Filoni, the Grand Master of the Equestrian Order of the Holy Sepulchre. 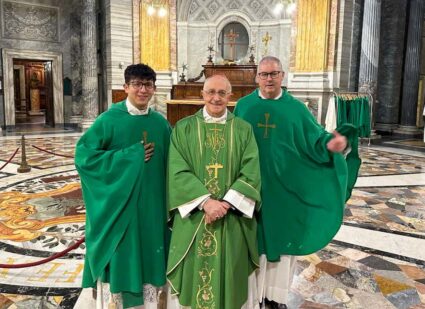 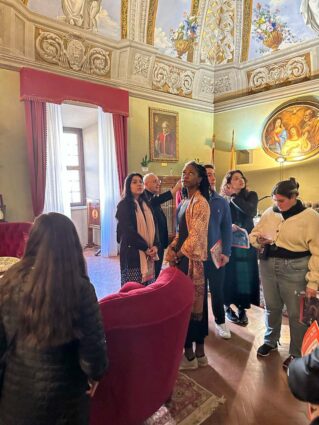 Father Nolan has organized these pilgrimages a number of times, and he has made it a special mission to get more and more young Catholics to experience the Holy Land, “The Fifth Gospel.”  It has been a very powerful event for many of these young people, so we are grateful that Father Michael has taken on this challenge.

Unfortunately, they arrived in Rome just as I was departing, so I didn’t get a chance to see them, but I wanted to share these photos with you.

Sunday, the Feast of the Epiphany, I went to St. Leonard’s Parish in North End for a Mass to celebrate the 150th anniversary of the parish and the installation of their pastor, Father Michael Della Penna. 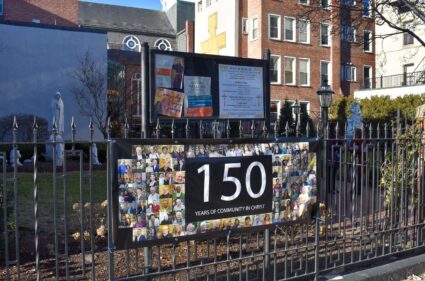 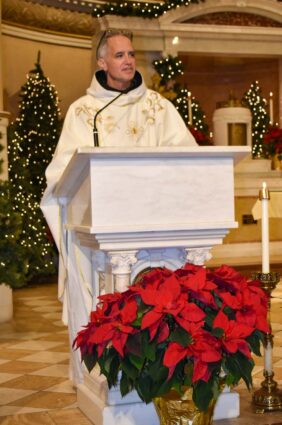 There was a huge standing-room-only crowd, which included the mayor, other civic leaders and Father Francis, the vice provincial of the Franciscans. 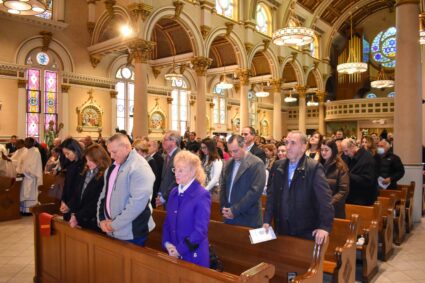 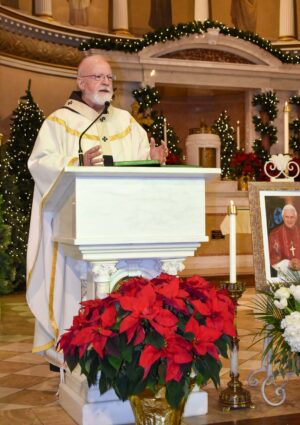 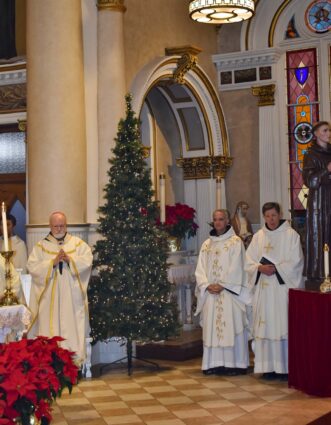 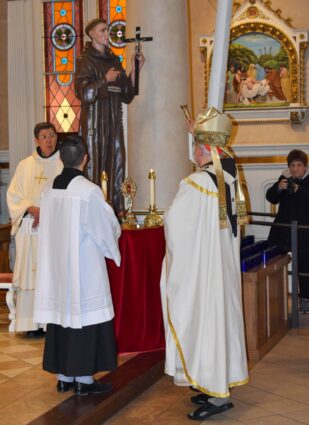 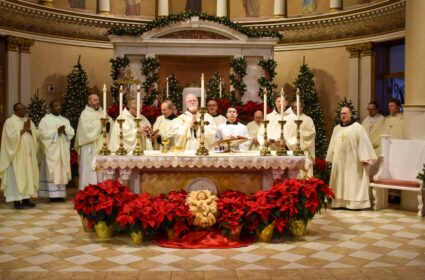 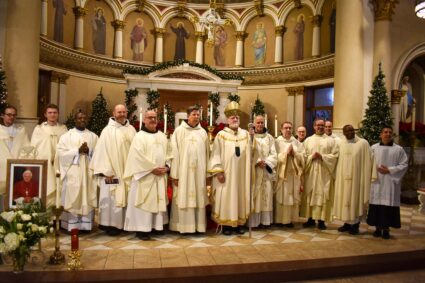 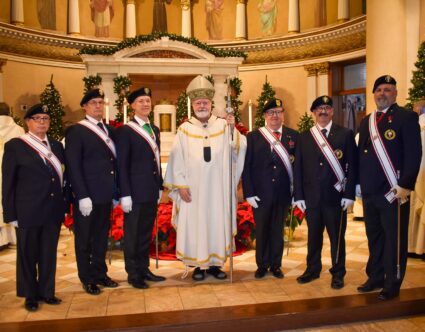 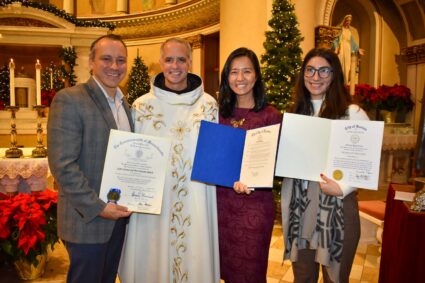 In my homily, I spoke about the history of the parish and about the faith of the Italian immigrants who built that community 150 years ago, always with the Franciscans of the Province of Immaculate Conception who ministered so generously and faithfully to the community.

You can hear my homily here: 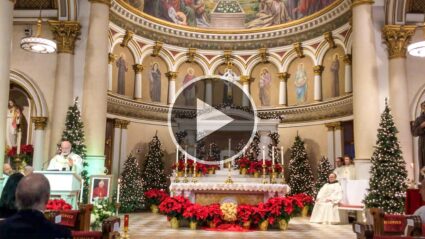 Father Della Penna’s installation and my homily begin just after the 30-minute mark.

At the Mass, they gave me the gift of this cross. 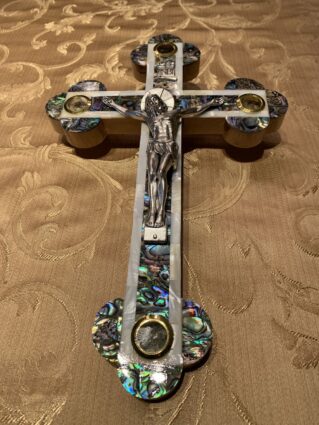 As you may know, the Franciscans are the guardians of the Holy Land, and this cross is typical of crosses from the Holy Land.  It has mother-of-pearl and soil from the Garden of Olives, Nazareth and Jerusalem.  It’s very beautiful, and I very much appreciate it.

Monday, I recorded a video interview at the cathedral with Terry Beatley, the president of the Hosea Initiative, a non-profit organization dedicated to advancing the legacy of Dr. Bernard Nathanson, who, as many of you know, was a leading abortion advocate who later became strongly pro-life. 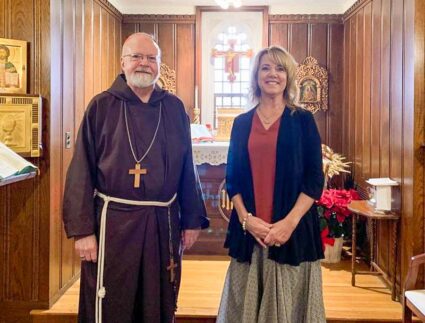 I look forward to sharing the video with you when it is released.

Monday, we had our annual board meeting of our Redemptoris Mater Seminary in Brookline. 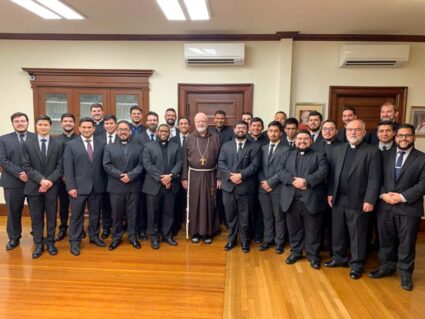 While I was there, I was very pleased to greet the seminarians.  Normally, several of them are in different places on itinerancy, but they were all back on this occasion.

Twenty years ago, Marianne Luthin began her tenure as director of our Pro-Life Office.  During that time, she accomplished so much good with the office’s ministries, including Project Rachel and Pregnancy Help, and many activities, such as facilitating the use of ultrasound machines provided by the Knights of Columbus and the Holy Hours for Life.  She has been a great pro-life champion, and we are very pleased she is now serving on the USCCB’s Committee for Pro-Life Activities. 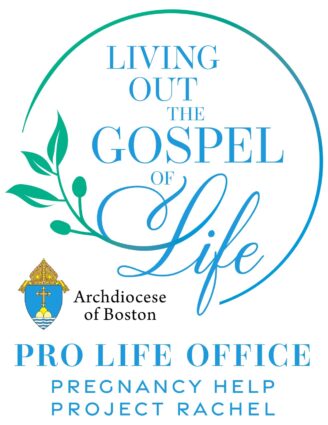 On Wednesday, we announced that Marianne would be stepping down as director of the office, though we are pleased that she will continue in the ministry as director of Project Rachel.  The new director will be Sylvia Fernandez-del Castillo and we are very pleased she has accepted to take on this great responsibility.  Sylvia studied in Mexico and France, so is trilingual and has been very active in the Church, including several years working for the Pro-Life Office.

The pro-life mission is more important than ever.  The Dobbs v. Jackson decision was certainly a landmark decision.  But, it only underscores our need to continue to change hearts and convince people of the sacredness of every human life and to reach out and help pregnant women in difficult circumstances so that they will be able to carry their children to term.  Programs like Walking with Moms in Need and other activities carried out in the parishes to support women in difficult pregnancies are crucial for us going forward.

Next week, a group of Boston pilgrims and I will participate in the 50th annual March for Life.  This year, the focus will be slightly different because the Supreme Court has reversed Roe vs. Wade.  However, the challenge is not just to change laws but to change people’s hearts and to help create a culture of life where every person is welcomed, valued, and cared for and ensures there is a place at the table of life for every child so that no child will be unwanted.