Celebrating Mass with the Catholic schools of Lynn

Friday, I celebrated a Mass for the beginning of the school year at St. Mary’s for the three Catholic schools of Lynn— St. Mary’s, Sacred Heart, and St. Pius V.   Our superintendent of schools, Tom Carroll, was there along with many people associated with the schools including St. Mary’s board chair Bill Mosakowski and St. Mary’s Head of School Dr. John F. Dolan and Associate Head of School David Angeramo. 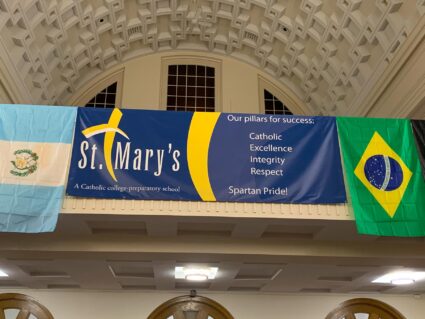 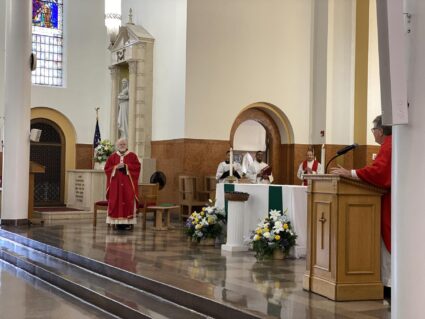 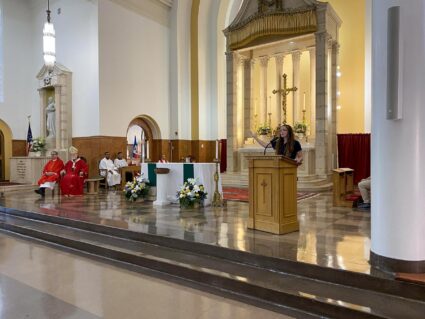 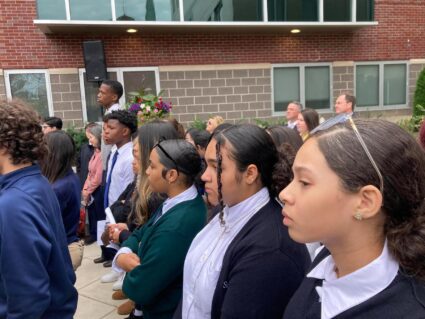 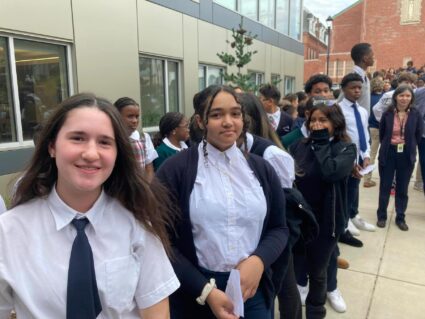 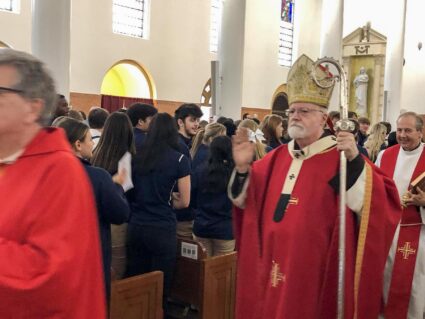 The church holds over a thousand people and was packed.  It was so encouraging to see such a large number of students, and in my homily, I spoke to them about the importance of the Catholic education they are receiving. 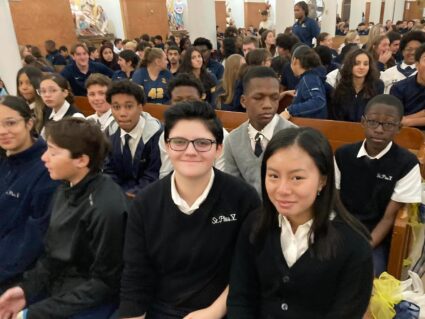 I must say, having a Mass for hundreds of schoolchildren who were all so attentive, focused on the Mass and participated beautifully was a very great joy.

After the Mass, we had the blessing of St. Mary’s new Mosakowski Prayer Garden.  As part of that garden, they have dedicated a fountain to me.  (I thought I was only going to get the Cardinal Seán O’Malley Memorial speed bump, but I got a whole fountain!) 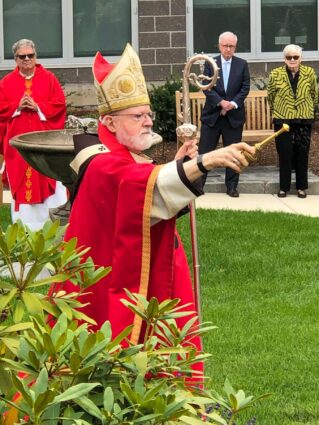 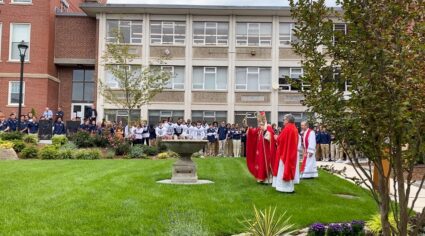 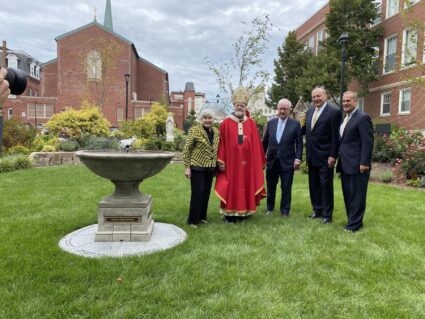 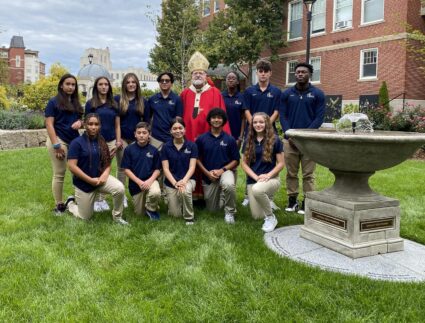 The prayer garden has a shrine to the Blessed Mother and beautiful Stations of the Cross that are based on the stations in the church.  Those in the church are very impressive and almost life-size, and those they have created for the garden are equally impressive but fashioned out of metal. 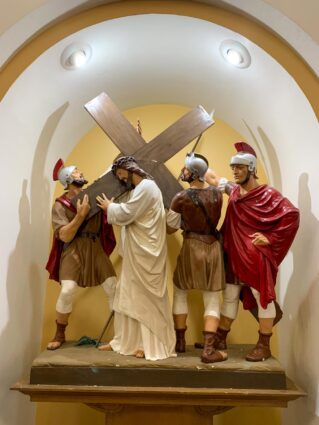 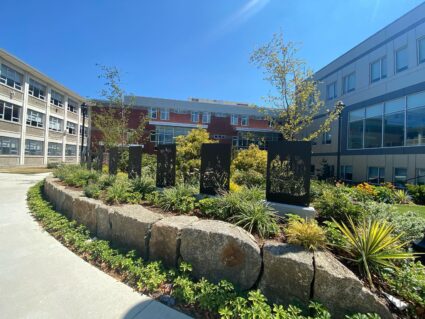 It’s a very beautiful space that is already attracting a number of people who gather for prayer and meditation.  It certainly enhances the beauty of the campus at St. Mary’s.

Saturday, I went to St. Margaret Mary in Westwood for the wake of Rose Marie Finnegan.  She was a woman of deep faith who was very involved in Cursillo, leading pilgrimages to Medjugorje and the Betania II retreat house.  So, I was very happy to be able to lead a short prayer service for her and her family.

Saturday evening, Father Ted Barbas, the pastor of St. John the Baptist Greek Orthodox Church, which is just down the street from the cathedral, invited us to attend their annual Greek Festival.  Msgr. Kevin O’Leary accompanied us and saw many of his parishioners who had been at the 4:30 Mass and gone over to have a Greek dinner! 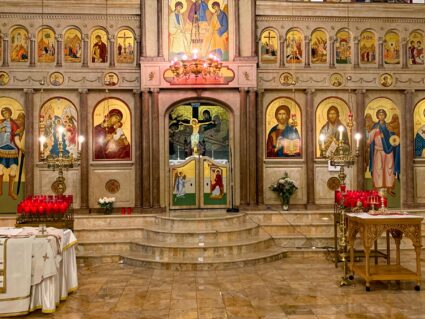 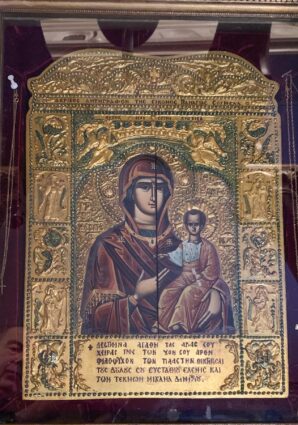 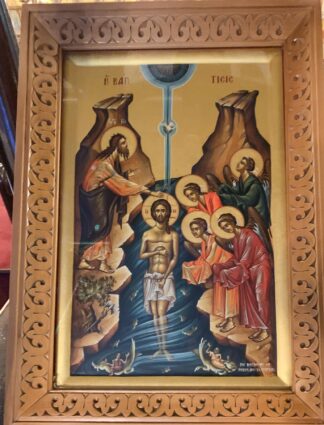 Of course, it’s the first time since the pandemic that they’ve been able to hold this gathering, so they had a great crowd.

We were very happy to see Metropolitan Methodios there, have some delicious spinach pie and greet the people. 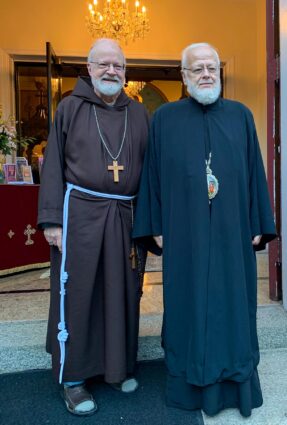 Sunday evening, we hosted our 33rd annual Cathedral Organ Benefit Concert at the Cathedral of the Holy Cross.  A number of guest organists and our own Richard Clark performed pieces on the cathedral’s Hook & Hastings organ.  They had a good crowd, and it was a great success. 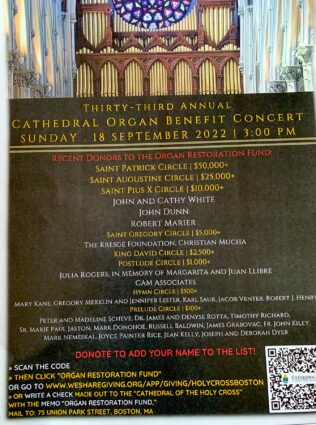 Also, I was pleased to learn that Richard has published his Four Eucharistic Motets that were inspired by his experience during the pandemic. 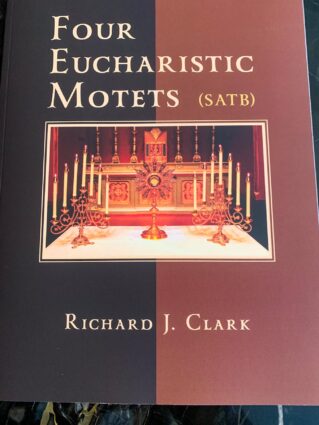 On Monday, we had a Zoom meeting of the Pontifical Commission for the Protection of Minors.   Then, on Monday night, I departed for Rome for meetings of the Council of Cardinals with the Holy Father. Cardinal Parolin participated by Zoom from New York because he was at the United Nations for the meetings of heads of state that are held this time of year.

During our meetings, we were able to discuss the recent consistory and make some plans going forward for the implementation of Praedicate Evangelium.  It was a very interesting session, and I was glad that I was able to be there for it.

It was also very good to see the Holy Father, whose condition is improving.  He had just returned from Kazakhstan and told us a little bit about his trip and said how edifying the interreligious meeting there was.

As I always like to do while I’m in Rome, I gathered for dinner with our Boston priests who are here.  One evening, we were joined by Msgr. Paul McInerny, Father Fernando Ayala, and Father Walter Carreiro.  (Father Walter was in Rome attending a conference of the Shalom Community that he is so involved with in Boston.) 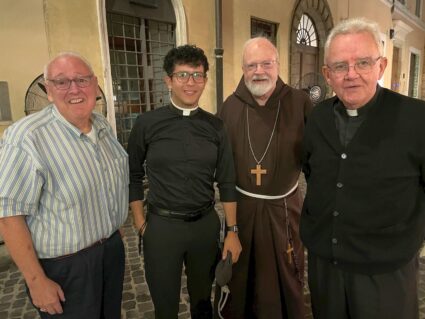 On another evening, we were joined by Father Joe Ferme, who is furthering his studies at the North American College.

Yesterday, I departed from Rome to drive to San Giovanni Rotondo where a Mass that I celebrated earlier today for the feast day of Padre Pio and marking the 20th anniversary of his canonization.  I will certainly share the details of that with you next week!