The disease of racism

Monday, I received a message from the Holy Father, in which he expressed his concern and prayers for our country during this time of unrest occasioned by the killing of George Floyd. The Holy Father also called the president of our bishops’ conference, Archbishop Gomez, this week in order to assure him of his prayers for the Church in the United States.

In light of the ongoing and unfolding tensions in our country surrounding the death of Mr. Floyd, I have prepared a reflection on the evils of racism that calls on people to work and pray for justice, peace and reconciliation. I have asked that it be shared in our parishes this weekend and I would also like to share it with you here: 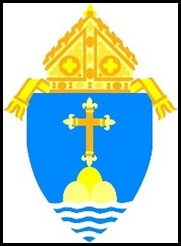 For four hundred and one years this land, which would become the United States of America, has had to deal with the evil and moral cancer that is racism.

When the word racism is invoked it is often identified in personal terms:  someone whose attitudes, convictions and actions target a group of other individuals because of color.  This is a valid but only partial meaning of the term.  From such people as Fredrick Douglass and Harriet Tubman, to contemporary leaders, thinkers and activists, African Americans have tried consistently to expand the general understanding of racism.  In word and deed, they have pointed to the reality of systemic and structural racism.

Racism and slavery find a common nexus in this country, the denial of the humanity and dignity of other persons.  As a nation we abolished slavery legally, but we have not dealt with its enduring legacy.  If we reject slavery then we must reject and denounce the dehumanizing attitudes that foster discrimination, inequality and violence.  Racism can be explicit, but it also can be unrecognized and unacknowledged. Yet, all of its manifestations are deadly and corrosive to civil society.  Like COVID-19, racism can infect any person, without regard of region, religion, race or ethnicity. It is highly contagious, easily transmitted to others, and too often unseen and disguised in those seemingly healthy.  Racism is a social and spiritual disease that kills people.

The murder of George Floyd, an African American citizen, at the hands of four rogue police officers was tragically all too familiar to the African American community.  During our lifetimes there has been the reality of the Negro Travelers Green Book, identifying locations where African Americans stop and stay in our country with less likelihood of being attacked.  We have seen the Ku Klux Klan’s brutal lynchings of innocent black people.  And we have now again witnessed heinous violence perpetrated by some who were entrusted with the duty to protect.  George Floyd’s death makes clear that racist premises and attitudes, often implicit, are woven through basic structures—political, legal, economic, cultural and religious—in the United States.

The earliest days of my priesthood were lived in Washington, D.C. on 16th St. in the heart of the city.  I was there the night Dr. Martin Luther King, Jr. was assassinated. The city was set ablaze with 700 fires; tanks lined the streets around the White House and soldiers with bayonets stood on every corner.  The killing of Dr. King sparked despair and rage throughout the African American community in the United States.  Since then there have been important and meaningful advances of civil rights and the election of an African American President.  But to know that fifty years later four police officers would see themselves entitled to murder a black man with impunity makes clear how far we must yet go to achieve racial equality.

In the weeks following Dr. King’s assassination in 1968, during the time of the Poor People’s March on Washington, I joined the individuals and families at Resurrection City at the Lincoln Memorial.  Off duty police officers hurled tear gas at our encampment and shouted vile profanities at us.  I did not then, and we do not now judge all police officers on the basis of the reprehensible, criminal acts of those few who betray their brothers and sisters in uniform. The vast majority of police officers, very notably in Boston through the leadership of Commissioner Gross, serve as heroic, selfless first responders who take seriously their mission and face danger to protect others.

The antidote to the poison of racism is community and solidarity. The protests in response to George Floyd’s murder, in my view, have been predominantly peaceful and focused on the urgent need to address racism as a systemic, cultural, and legal reality.  Some violent protesters and out of town infiltrators, few in number but by intention disproportionately visible, had interest in neither justice nor its achievement.  As Governor Baker stated, they should be legally punished and should not be able to tarnish the greater significance of the peaceful marches and demonstrations we have witnessed.

We recognize that the Catholic Church in the United States must contend with our historical complicity in slavery and our need for racial healing. However, an important part of the legacy of the Catholic faith is our social teaching.  The Catholic Church is a community of people of all colors, nationalities and ethnicities. Catholic moral teaching is based on the fact that all people – without regard to race, religion, ethnicity or nationality – are created in the image of God.  This teaching rejects any form of racism, personal or systemic.  Our faith calls us to leadership in breaking down barriers and standing against injustice.  To violate human dignity is to dishonor the presence of Christ in each person.

Going forward, the reality of racism in our society and the moral imperative of racial equality and justice must be incorporated in our schools, our teaching and our preaching.  We must uphold the commitments to equal dignity and human rights in all institutions of our society, in politics, law, economy, education.  Catholic teaching on social justice measures the way a society acts fairly or not.  Our work will not be done until African American men, women and children are treated equally in every aspect of life in the United States.

The killing of George Floyd is painful evidence of what is and has been at stake for African Americans – the failure of society in too many ways to protect their lives and the lives of their children.  As Catholics we are taught to nurture and protect life from its inception to its natural end and at every moment in-between.  The demonstrations and protests of these days have been calls for justice and heart wrenching expressions of deep emotional pain from which we cannot turn away.  They call us to affirm the inestimable value of every person’s life.  They call us to redouble our commitment to foster respect and justice for all people. They call us to uphold and defend the truth that Black Lives Matter.

With the assurance of my continued prayers,

Devotedly yours in Christ,

The Knights of Columbus are inviting all Catholics in the country to participate in a novena beginning June 7 to pray for national unity and an end to racism. I encourage all the blog readers to join in prayer with the Knights. The prayer can be found here. 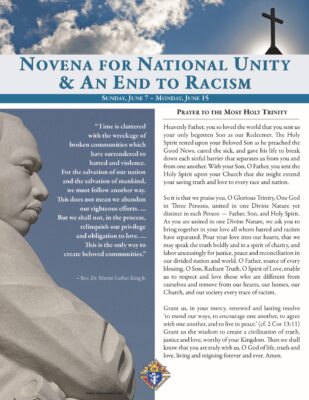 This past Sunday was, of course, Pentecost and, like many other parishes in the archdiocese, we resumed our regular public Masses at the Cathedral of the Holy Cross. It was fitting that we began on Pentecost, which is the birthday of the Church. 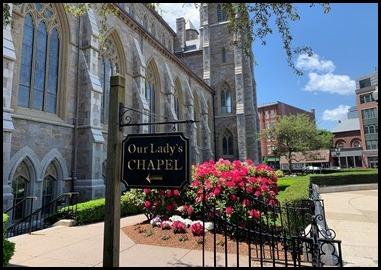 I was happy to celebrate the Mass for the Spanish community. 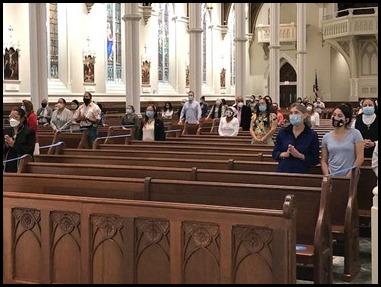 Of course, people are returning slowly but we had about 300 parishioners come to join us — about 200 in English and about 100 in Spanish. We had put in place all the required precautions and the people were very happy to observe them – we had an online registration system for reserving seats ahead of time, everyone wore their masks, the pews were marked for social distancing, and we had a team ready to perform the cleaning and sanitizing after Mass. 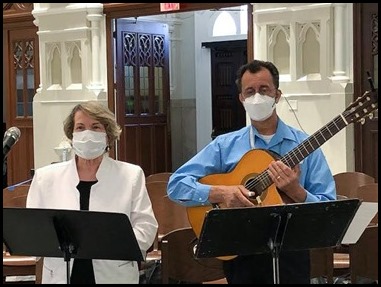 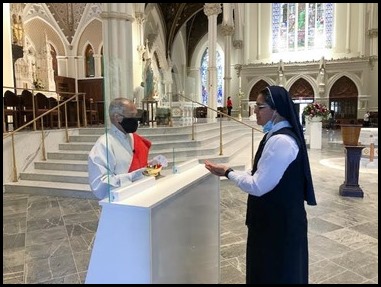 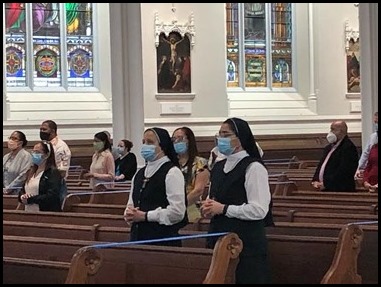 We are grateful to all the volunteers and people who helped with the many different tasks that are now required for the celebration of a public Mass during this time of pandemic.

For the first weekend, I think things went very well and everyone seemed happy to be back in the Cathedral.

Sunday afternoon, I was happy to join those praying the online rosary with Eduardo Verástegui that I mentioned that week. His goal was to try to get a million people to join him through different social media channels. I don’t know how many people ended up participating, but I am sure it was a very large audience. 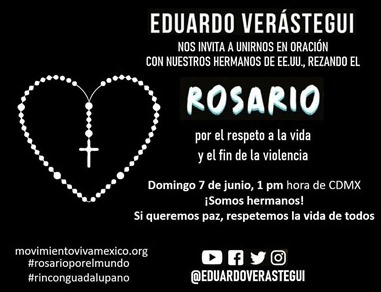 He began with a very beautiful personal testimony of his own faith. 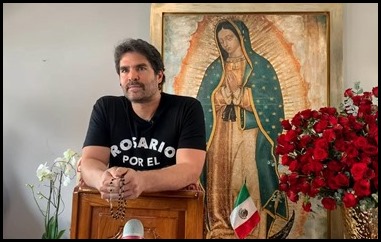 I was particularly struck by the symbolism of having the rosary on Pentecost weekend because, following the tradition of the Acts of the Apostles, we persevere in prayer in the company of the Blessed Mother.

On Monday, I had several online meetings, beginning with our annual board meeting of the Catholic University of America. Ordinarily, the meeting would have taken place at the university but this year it was done via Zoom.

Catholic University is the only university sponsored by the bishops of the United States and it is also the university that has probably trained the most priests and religious over the years. It is a very important institution for us. 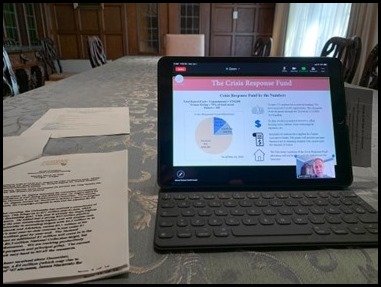 They are still hoping to be able to reopen the campus to students in the fall, but they are waiting for clarifications from the appropriate authorities. And, of course, like all colleges and universities, they face great challenges due to the economic strictures that are the result of the pandemic. It was a very good meeting and I was glad we were able to do it by Zoom.

That day, we also had a meeting of the auxiliary bishops of the archdiocese. We hold this meeting each week as an opportunity to share information and discuss our plans going forward. Among the topics we discussed this time was the process of resuming confirmations following the Feast of Corpus Christi, and announcements about that will be made soon.

We are very grateful to the auxiliary bishops and episcopal vicars who are doing such a fine job being present in their region.

Wednesday, we hosted a webinar on fundraising during this time of pandemic. Certainly, with the decrease in offertory contributions because of churches being closed, our parishes are experiencing a great deal of financial stress. The webinar was aimed at helping parishes address this problem. 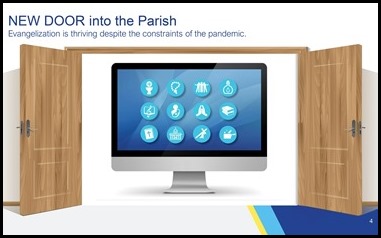 It was hosted by Pat Bartram, the head of our development office, and John Corcoran, the chairman of the board of iCatholic Media and the person who conceived of the 90 Days Now – For Your Parish Initiative, which has been rather successful in raising money for our parishes. Online giving is going to be ever more important for our parishes as we move forward and we certainly want to encourage our people to remember that their parish needs their contributions to be able to carry on their mission. 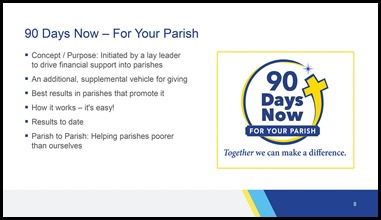 On Thursday we continued our virtual meetings of the Council of Cardinals advising the Holy Father. Ordinarily I would have been traveling to Rome for these meetings but, because of the pandemic, we are continuing some of our work online. We also met last Friday and, during that meeting, the Holy Father called to encourage us in our work. It was very good to have him join our meeting.