It is never too late to Arise!

Hello to you all!

The Vatican announced this week that the Holy Father has lifted the excommunications of four bishops of the Society of St. Pius X. I was pleased with the news which shows, once again, the Holy Father’s concern for unity and reconciliation in the Church.

In 1988 Archbishop Marcel Lefebvre, who was critical of some elements of the Second Vatican Council, ordained four bishops without the approval of the Holy Father, incurring in automatic excommunication on himself and the four bishops he ordained.

This action follows the publication of the Apostolic Letter Summorum Pontificum a year and a half ago, in which the Holy Father lifted previous restrictions on the celebration of the Mass according to the 1962 Missal, commonly known as the Tridentine Mass.

Just before the publication of the Apostolic Letter, I was privileged to be a part of a meeting of cardinals and bishops with the Holy Father in which he expressed his hope that his action would help convince those disaffected Catholics to return to full union with the Catholic Church.

So, his outreach to the communities who follow these bishops is just one more manifestation of his ardent desire to bring these people (which some estimate to be as many as 1.5 million) back into the fold.  We know that these are generally people who practice their faith and try to live a Christian life seriously but, unfortunately, I believe that they have been misled by their leadership.

Of course, lifting the excommunications was a first step; it does not regularize these bishops or the Society of St. Pius X, but it opens the way for a dialogue. This step was in response to a letter in which they professed their desire for full participation in the life of the Church.

It was tragic that one of the four bishops, Bishop Richard Williamson, had made outrageous statements about the Holocaust and about the September 11 attacks on the United States. It certainly raises questions as to the caliber of the leadership that the Society has. Additionally, as terrible as the comments were, it underscores the importance for the Holy Father to have increasing influence over those communities.

We are very sorry that the people in the Jewish community have been so pained and outraged by Bishop Williamson’s statements. I think the Holy Father’s statements and those of Cardinal Walter Kasper, chairman of the Pontifical Commission for Religious Relations with the Jews, have been very clear to dissociate the Catholic Church from those kinds of sentiments. I was pleased that the head of the Society of St. Pius X, Bishop Bernard Fellay, also repudiated the statements of Bishop Williamson.

It is very important for us to always remember the Holocaust so that such an atrocity could never take place again. I recall the words of the Holy Father this week: “May the Shoah be for everyone an admonition against oblivion, negation and reductionism, because violence against a single human being is violence against all.” 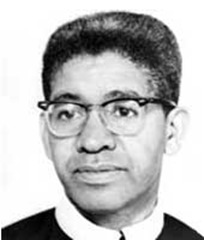 He was the first West Indian to join the Redemptorist Order and served God’s people faithfully and generously in Dominica, St. Lucia, St. Thomas and St. Croix.

I was very impressed at Father Carlisle Blake’s beautiful homily about Father Bertrand’s life in which he said that, if the rule and constitutions of the Redemptotists were lost, they could be reconstructed by studying the life and example of Father Bertrand. It is very true.

Also this week was the funeral of Rabbi Leon Klenicki of Argentina, a great figure in the field of Jewish-Catholic relations and a man I knew for many years. 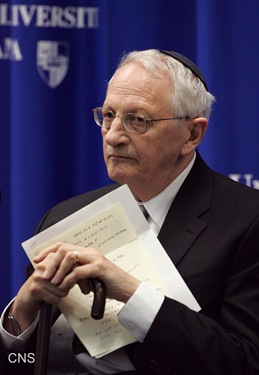 At my request, in August 2007 the Holy Father honored him with the Knighthood of St. Gregory, the highest honor that can be given to a non-Catholic. 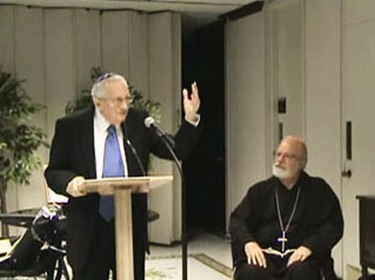 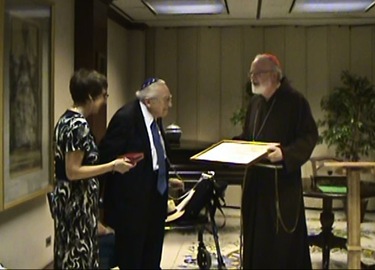 Receiving the The Knighthood of St. Gregory in August 2007 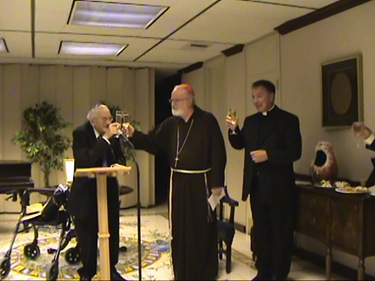 He was a man of God who was a friend of the Catholic Church and a bridge between the Catholic and Jewish community in Argentina and in the United States. His death is a great loss. 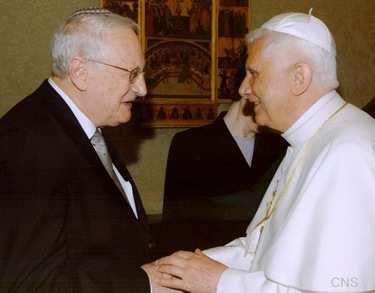 I first met Rabbi Klenicki when I was a young priest. He conducted a Seder meal in Spanish for my parish and, ever since, we had maintained a very close relationship.

I want to express my condolences to his family and his community. We share in their loss at his passing.

Last week, the March for Life was a great success. The numbers of people who participated — particularly the number of young people — and the enthusiasm of the people for the cause was very encouraging. However, it is disturbing to see that the secular press, for the most part, chose to ignore a gathering of this proportion. 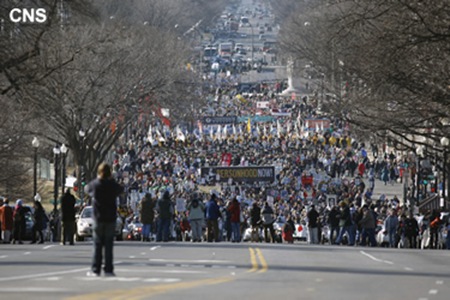 This week someone shared an article with me written by Don Feder, whom many of you will remember as a long-time Boston Herald columnist.  In the article, he expresses dismay that the March for Life did not even receive a mention in the New York Times. He makes a strong point when he says that, had the cause been one that the liberal media was in favor of, even if there were just a few people there, it would be given prominence of place.

Sadly, the pro-life cause frequently receives this sort of unfair treatment. The media often seem to prefer to ignore the fact that huge numbers of Americans are dismayed at the lack of legal protection for human life in our country and are willing to express that in a public demonstration. This is certainly indicative of what a lacuna there is in our national media when it comes to the pro-life cause.

Also this week, as we feared, the President has chosen to reverse the Mexico City policy which prohibited U.S. government money from being used in  programs which provide or promote abortions overseas.  We can only speculate on what the implications of that decision are going to be.

When we see the numbers of abortions being performed in the developing world — many of which are directed at girls in the womb — it is very disturbing to think that our country is going to be promoting this kind of assault on human life and dignity throughout the world.

Abortion is a great evil and anytime restrictions to abortion are lifted it is a tragedy. As I said previously, it is very encouraging to see so many young people participating in the March for Life and in other events throughout the year. We must continue to educate new generations about the gift of life.

A friend sent me a link to a video commercial on the issue that I want to share with you. It speaks for itself. 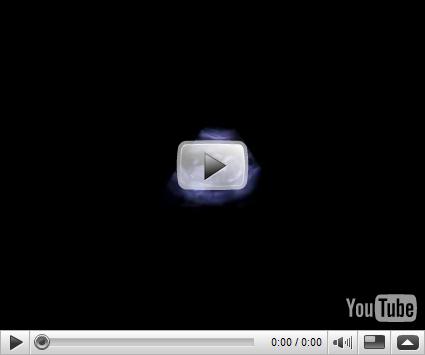 Mario Paredes, who has been working on the Board of the Society and is now on their staff, has done much to create closer ties between the American Bible Society and the Catholic Church.

Monday evening we had a meeting of over 200 group leaders from Arise! Together in Christ  Program here at the Pastoral Center. 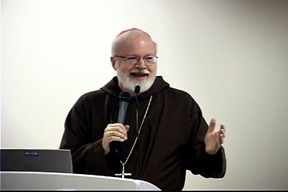 It was very encouraging to hear their reports and also to learn that the Arise for Youth Program has been developed. Some of our parishes are leading the implementation of those post-confirmation-type of programs to bring our young people together for prayer and faith formation.

The Arise program has been a great blessing and we’re happy that more and more parishes are coming on board.

It was also encouraging to hear from the various ethnic groups — the Haitian, Portuguese-speaking, Spanish-speaking and Vietnamese  communities — that are participating in this program that we initiated as an observance of our Bicentennial year.

I also want to express my gratitude to the Arise participants from St. Mary’s in Dedham who sent me a card expressing their thanks for the program a few weeks ago. 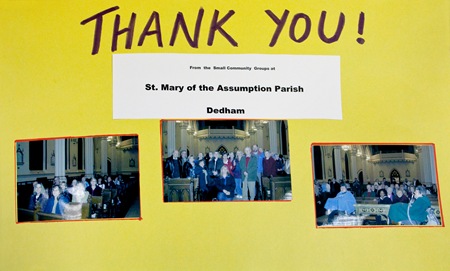 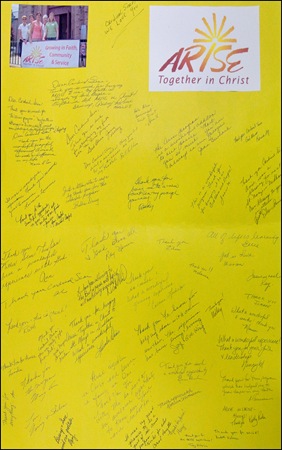 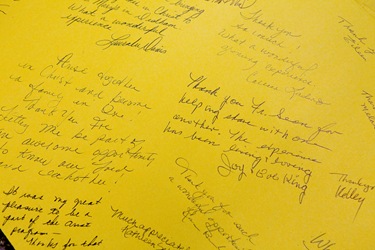 I am so pleased that Arise is making a difference in the lives of so many around the archdiocese.

In Lent, we’ll have another group of parishes launching the Arise program. So, as they say, it is never too late to Arise!

Until next week,
Cardinal Seán