Early September is the time when we celebrate the Mass of the Holy Spirit at our three seminaries to begin the academic year.  The first of those was Pope St. John XXIII National Seminary on Friday. 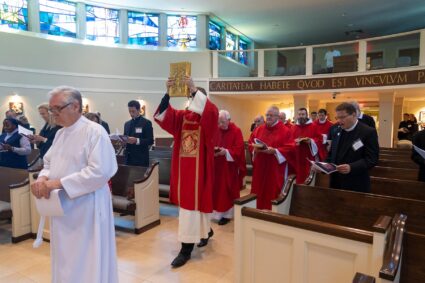 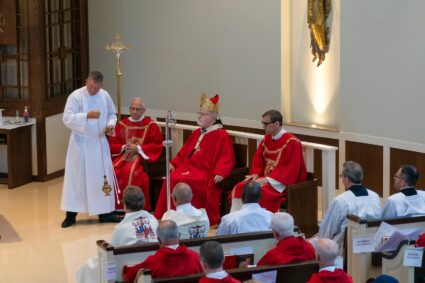 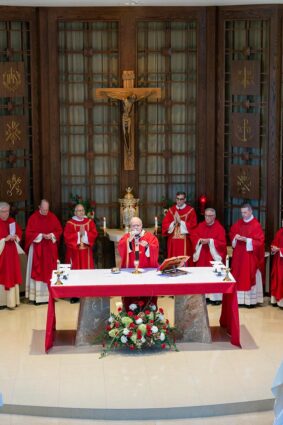 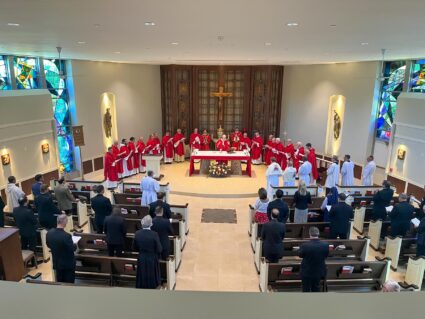 At Pope St. John Seminary, the community Mass on Friday is always in Spanish.  This is a nice custom they have to get their seminarians used to liturgies in Spanish.  I always thank them for doing that because I think it is an important part of the seminarians’ preparation for ministry since Spanish is becoming so prevalent in our Church and the majority of Catholic immigrants coming to this country are from Spanish-speaking countries.  So, it’s important for priests to have some familiarity with the language and be comfortable with the liturgies celebrated in Spanish.

They have a very good group of seminarians this year, and we are very happy that there are four men entering this year for the Archdiocese of Boston. 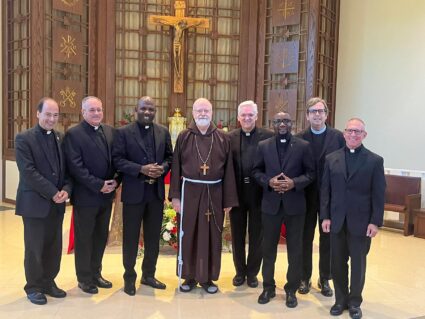 Sunday, I went to our Redemptoris Mater Seminary in Brookline to celebrate the Mass of the Holy Spirit there. 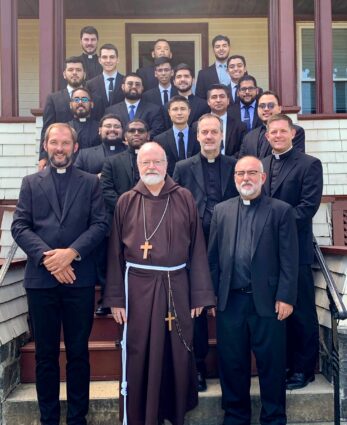 The Mass was also an occasion to institute several of the seminarians into the ministries of lector and acolyte. 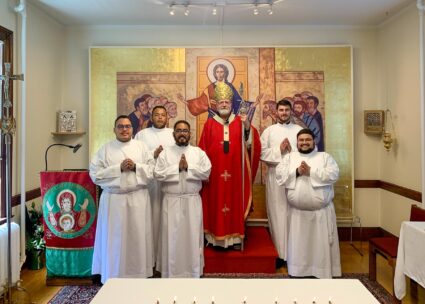 There, we received the news of the death of Adelchi Chinaglia, one of the board members of the seminary who was very instrumental in helping us establish the seminary.  He was a canon lawyer who loved the Church and had a great commitment to the New Evangelization. 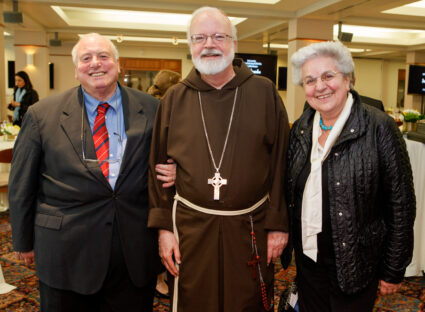 With Adelchi and Franca in 2015

We offered the Mass for him, which I thought was very fitting because he had such a great love for the seminary, and I was able to express my condolences to his wife, Franca.

His funeral Mass was celebrated yesterday in the Basilica of Santa Maria della Salute in Venice, Italy and was presided by the Patriarch of Venice, Archbishop Francesco Moraglia.  I was able to watch it via the live stream, and I was very impressed to see that they placed a palm on the coffin, which I understand is a tradition of the Neocatechumenal Way. 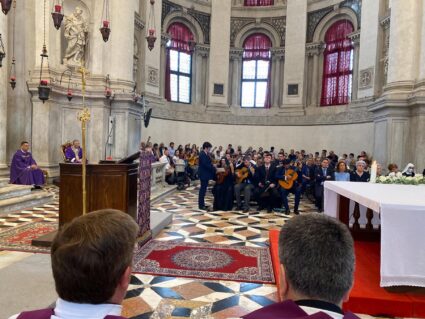 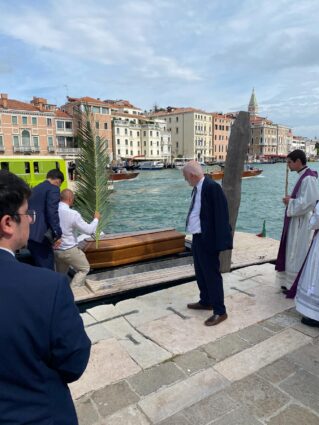 Later that day, I was very happy to celebrate the wedding of Jennifer Fish and Robert Lane at the Cathedral of the Holy Cross. 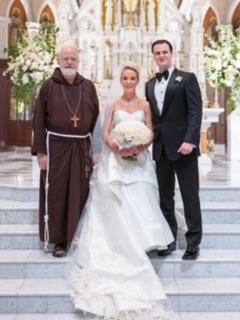 It’s always a joy to be able to celebrate a wedding.  When I left Washington D.C. to go to the Virgin Islands, they contacted me from the marriage office to let me know that I had celebrated more weddings than any other clergyperson in the District of Columbia!  Of course, I was working with the immigrant community, who were all young and of marriageable age.  I would have 100 baptisms for every funeral and marriages every weekend.  It was a wonderful priestly experience to celebrate those sacraments, and I was very happy to have a bit of that experience again celebrating the wedding of Jennifer and Bobby.

Then, in the afternoon, I went to South Boston to join the annual Labor Day barbecue that Father Robert Casey hosts for priests.  Though he had to move it up a day because of expected storms, it was a joy to be able to gather with them again since we haven’t been able to have this cookout for the last couple of years because of the pandemic.  We had a wonderful time gathered on the patio with the many priests who were with us.

Monday, I visited The Missionary Sisters of the Word at their novitiate in West Greenwich, R.I.  Our Deacon Rodrigo was with us for the Mass, and there were about 20 sisters, including the Mother General who was visiting from Mexico, Mother Esmeralda. 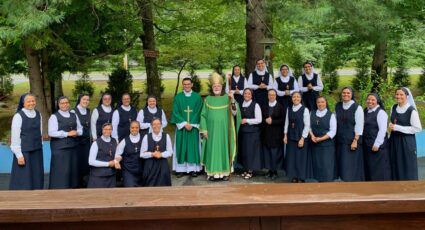 Afterwards, we had a wonderful Mexican lunch with the sisters.

It was very encouraging to see this community of young religious women.  Though it was founded in Mexico less than 30 years ago, they are already in several countries, including the U.S., The Philippines, Vietnam, Spain and, of course, Mexico.  In Rhode Island, they have four novices who are going to be professed next Saturday and another who is going to make her final profession.

Tuesday, we had our Mass of the Holy Spirit at St. John’s Seminary.  We were joined by many of the vocation directors from the various dioceses that send men to seminary.  This year we have quite a number of religious coming to the seminary, as well, including four Benedictines and seven Carmelite friars who are enrolled. 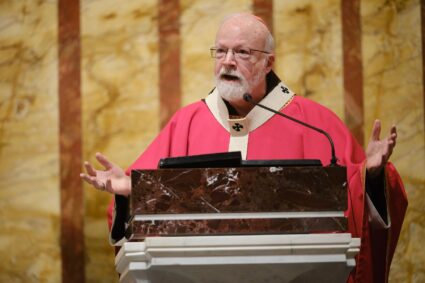 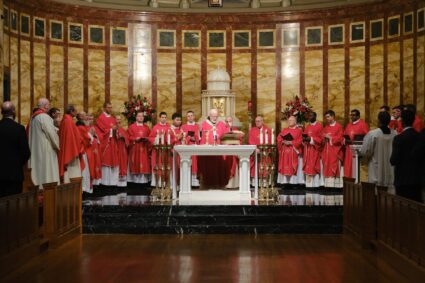 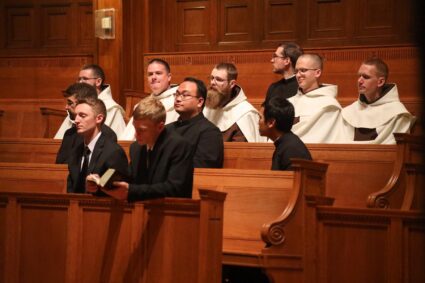 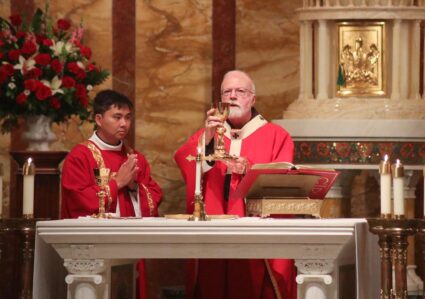 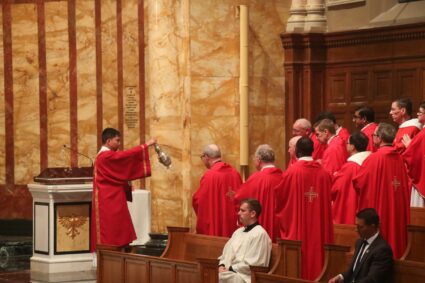 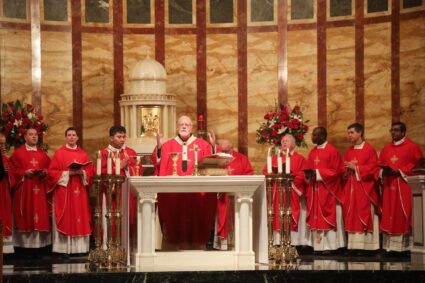 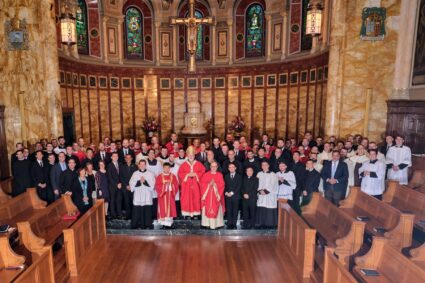 As you can see it was something of a vocation-themed week, with the Mass at the three seminaries and with the sisters in Rhode Island.  And, as I told the people at St. John’s, I had just returned from the consistory in Rome where one of the new cardinals, Cardinal Adalberto Martínez Flores, was one of the vocations that came from our parish in Washington.  I said what a joy it was to see the fruits of that vocation and how God has used him and his ministry in the islands and also in his own country of Paraguay.

Once again, it’s been a couple years since we were able to hold this gathering because of the pandemic.  Of course, in the past, we had held the senior priest lunch at the Boston College Club, and it was sponsored by the Order of Malta and particularly by Jim O’Connor and Jack Joyce.  Sadly, both of them have gone home to God, but we are continuing the tradition at the Pastoral Center.

Thursday, I celebrated the funeral Mass of Father Jim Darcy at St. Francis in Cambridge, where he had ministered for a number of years. 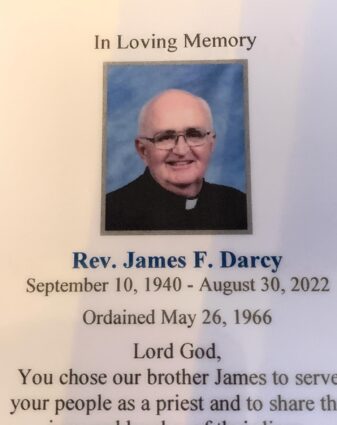 Our homilist was Father Jim Achadinha, who gotten to know Father Darcy when he was at St. Anthony of Padua.  In those days, Father Darcy was helping at St. Francis, and they became friends.  Father Achadinha told us that Jim Darcy was called “James the Greater” and he was “James the Lesser” to distinguish them!

Finally, I want to say that I join people throughout the world in mourning the passing of Queen Elizabeth II. 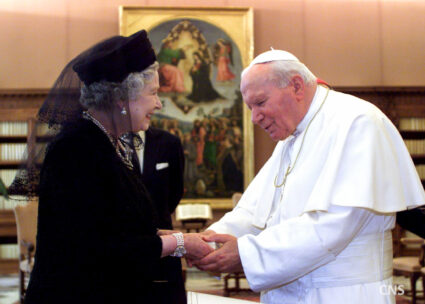 It is said that Pope John Paul II was the individual seen personally by the most people in the history of humanity.  However, I believe Queen Elizabeth is probably the person who is most well known, through her reign over the British Empire and the United Kingdom for more than 70 years, being the head of state for so many countries and having her picture on currency and stamps.  I remember as a small child watching her coronation on television and seeing it afterward in the newsreels at the Saturday matinee where we would go to watch a cowboy double-feature.

Certainly, her death is the end of an era.  She was a woman of faith and woman who made a great contribution to harmony among nations and to peace in our world.  She was a very gracious person and understood how important the role of the head of state can be.  In many European countries, the chief executive of the country is different from the head of state.  The head of state in Europe is often a president or a monarch whose role is to simply serve as a symbol of unity for the country.

Here in the United States, our president is, at the same time, the chief executive and the head of state.  As wonderful as our American system is, I sometimes think it is too great a burden to put all of that on the office of the president.  At times, partisan politics can make it very difficult for a president to serve as that symbol that unites people.  That is certainly the role that Queen Elizabeth filled very well, from the time of World War II until the present, not just in her own country but in the Commonwealth nations where she was the symbol of that unity as their head of state.

We pray for her and for the transition that her death will necessarily bring about in the United Kingdom.