The 500th anniversary of the Cathedral of San Juan

Last weekend, I visited Puerto Rico at the invitation of Archbishop Roberto Gonzales to join in the observances of the 500th anniversary of the Cathedral of San Juan Bautista, the second oldest cathedral in the hemisphere. 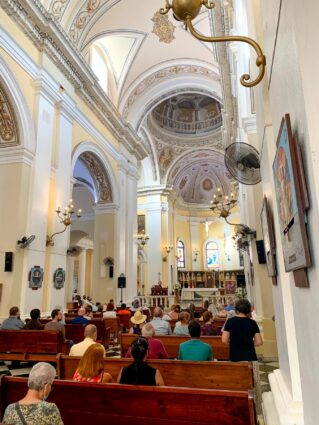 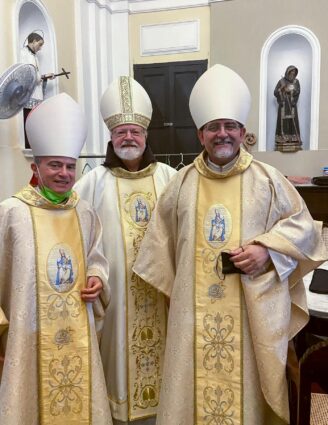 Being half a millennium old, the cathedral obviously has great historical significance, including serving as the burial site of Ponce De Leon.  He was, of course, the famous Spanish explorer who arrived in Florida looking for the fountain of youth.  (I don’t think he ever found it because there are still lots of old people going to Florida looking for it!)

Archbishop Gonzales arranged to have several different celebrations over the course of the year, and I was asked to celebrate the concluding Mass on Monday, August 1, which is also the vigil of the Feast of the Portiuncula. 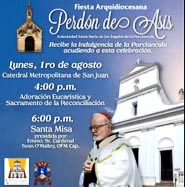 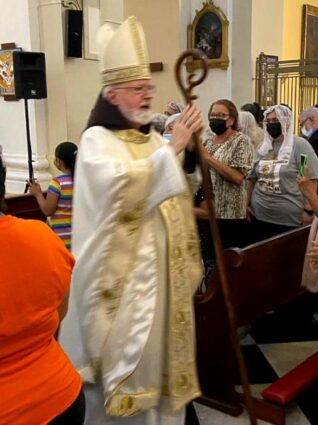 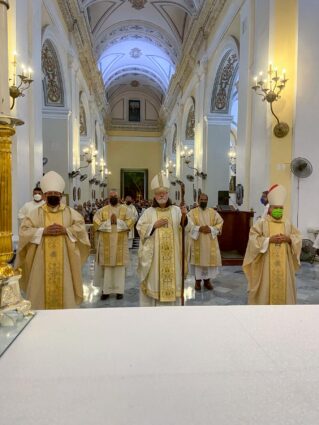 There was a Holy Hour before the Mass; both were packed, with some people even having to stand outside.

Since the Portiuncula is a Franciscan feast, Archbishop Gonzalez invited all the Capuchins and the Franciscans from his community to be a part of the Mass.  They were all hearing confessions during the Holy Hour, and he invited all the friars for a meal afterward. 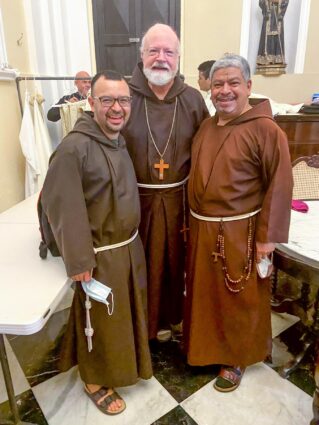 With Friars Manuel and Moises 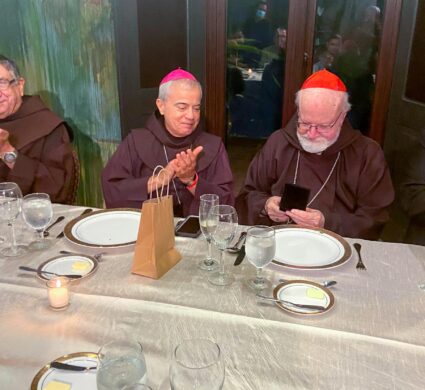 At the meal, Archbishop Gonzalez gave me a commemorative medallion for the 500th anniversary of the cathedral. 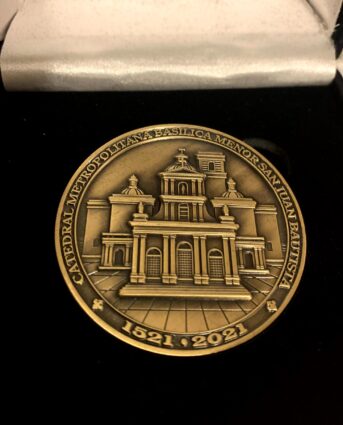 While I was in San Juan, I had an opportunity to visit several churches and important historical sites.

I celebrated Mass at the Capuchin Church of San Francisco de Asís. 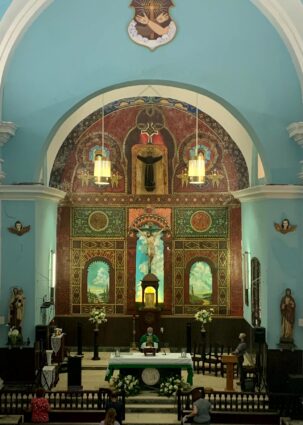 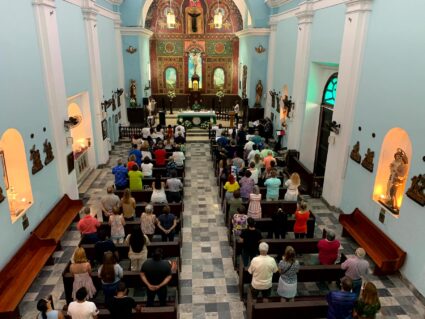 The Church of San José is one of the oldest churches in the hemisphere and, in fact, was the original resting place of Ponce de Leon before his tomb was relocated to the cathedral. 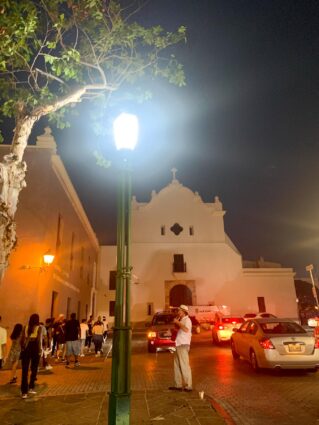 Another church, San Jorge, is near the Condado, and I stopped into the chapel where they hold perpetual adoration. 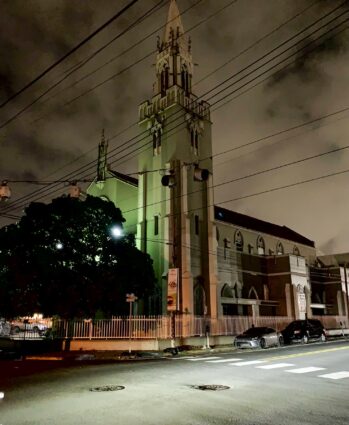 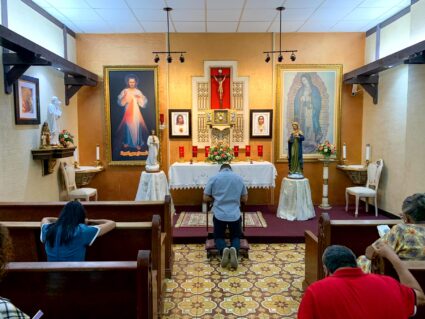 I also had an opportunity to see El Morro, the famous fortress that is so emblematic of Puerto Rico. 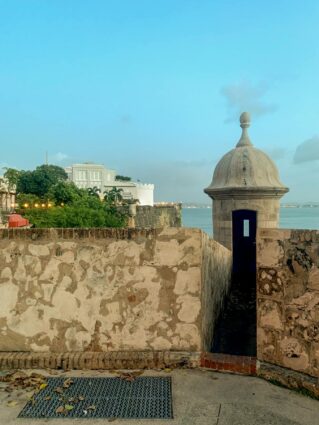 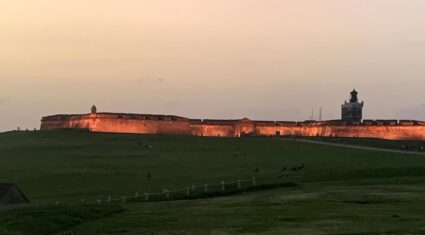 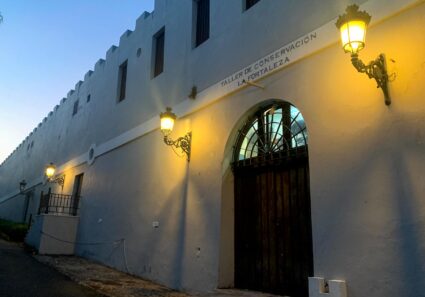 Nearby is the sculpture commemorating the La Rogativa, which translates roughly to “The Procession,” but with a sense of penance or supplication. 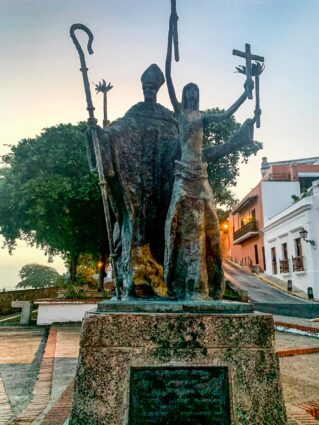 It recalls an incident in Puerto Rican history when the British Navy blockaded the port and was preparing to invade the city, which had very few troops.  So, the bishop organized a procession with the women of the city, and they marched around with torches, singing and asking for God’s mercy.  Seeing the torches in the distance and hearing all the commotion, the British thought reinforcements had arrived and fled.

The statue is very near the gate of the city. 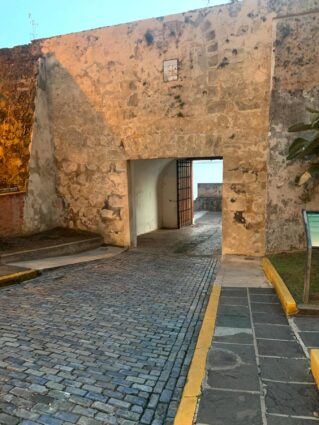 When someone entered the city, they would walk through the gate and up the blue cobblestone way, which led straight to the cathedral.  There they would pray a Te Deum in thanksgiving for their safe arrival. 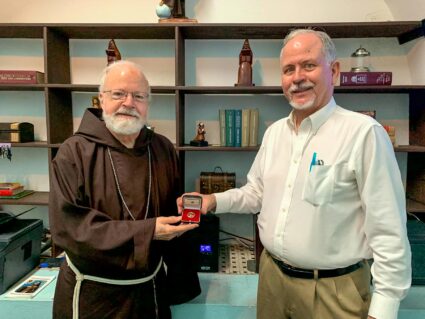 Archbishop Gonzalez had previously given me another relic.  I had it placed in the altar during the rededication of the Cathedral of the Holy Cross because we have such a large Puerto Rican community at the Cathedral Parish.

My final stop was on Tuesday, as I was preparing to head home to Boston.

I visited a home run by the Hermanitas de los Ancianos Desamparadosto see one of their residents, Alberto Arango.  He is a member of the Agrupación Católica Universitaria, with which I have been involved for many decades. 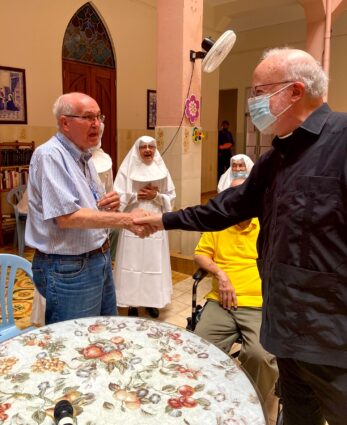 So, I was happy to stop by to greet my fellow Agrupado and give him a blessing for the Feast of the Portiuncula. 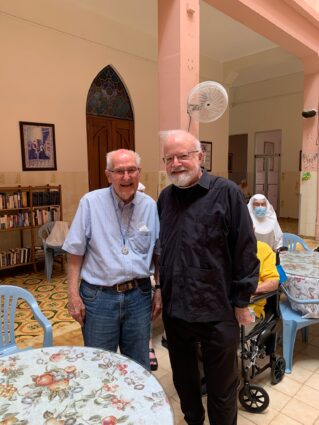 On Wednesday, I celebrated a Mass at St. Ignatius in Chestnut Hill for the participants in the International Association of Jesuit Universities 2022 Assembly, which was being held at Boston College.

Concelebrating with me was Superior General of the Jesuits Father Arturo Sosa, Bishop Paul Tighe from the Dicastery for Culture and Education of the Holy See, and, of course, B.C.  President Father William Leahy.

In my homily, I talked about the importance of transmitting the faith, being keepers of prayer and witnesses of holiness through Ignatian spirituality. 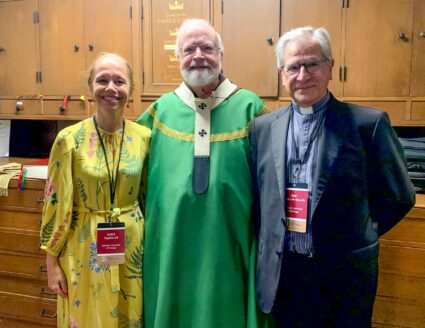 That day, I also met with Archbishop Borys Gudziak, Archeparch of the Ukrainian Catholic Archeparchy of Philadelphia, who is also president of the Catholic University of Ukraine.  He was in town for the university gathering and came to talk about the situation in Ukraine. 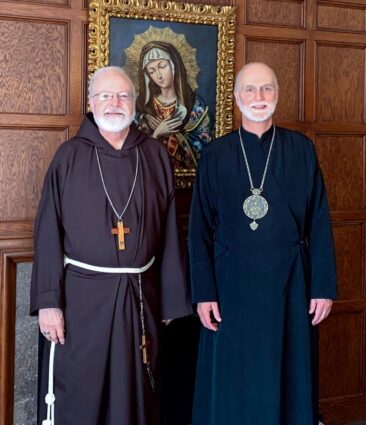