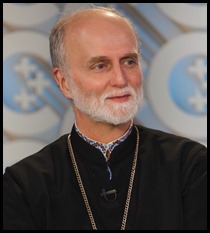 As a result of the generosity of Catholics here in Boston, we have raised over $1 million through our special collections to aid the people of Ukraine, and I was consulting with Archbishop Gudziak about how those funds might be best directed. Half of the money will be used for urgently needed refugee and humanitarian aid, and the other half will be used to help rebuild Ukraine once that process can begin.

The archbishop was very grateful for the support and prayers of the people of the Archdiocese of Boston. He himself has many associations with Boston, including studying for several years at Harvard and living in the area for almost 10 years. He is also very close to our local Ukrainian Catholic Parish, Christ the King.

Saturday, I went to St. Ann’s in Marshfield to bless their new renovations. 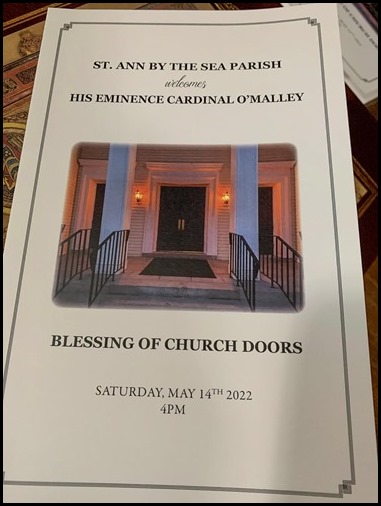 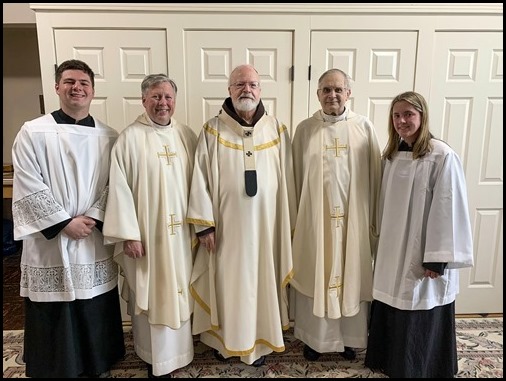 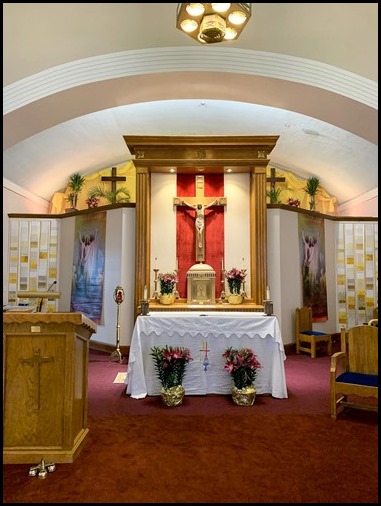 The parish had installed new doors in the church and completely restored the vestibule. So, we celebrated the Rite of Blessing of Church Doors. Frankly, I had never heard of the blessing of the doors, but, as it turns out, it’s a very beautiful rite in the Catholic ritual. 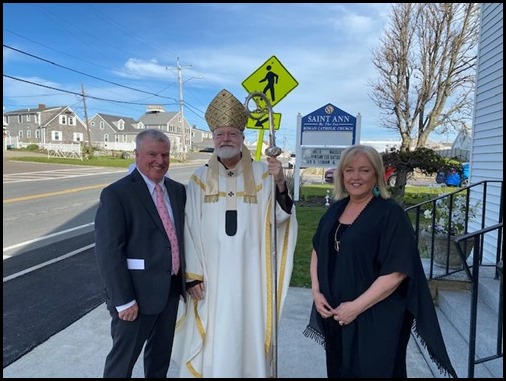 With Kevin and Ann O’Connor, who generously donated the new doors for the church in memory of Ann’s parents, Jack and Eleanor O’Connell 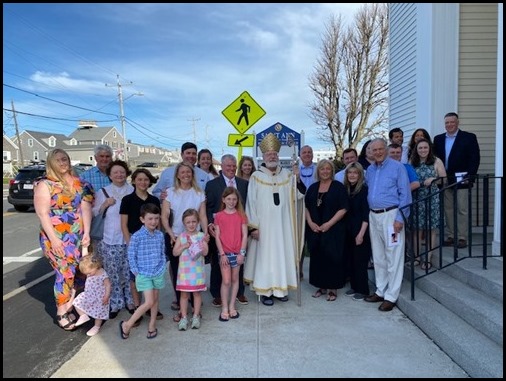 With the O’Connor and O’Connell families

Sunday morning, I went to St. Paul’s Parish in Hamilton, where Father Michael Lawlor is pastor, to join in the celebration of their 100th anniversary. 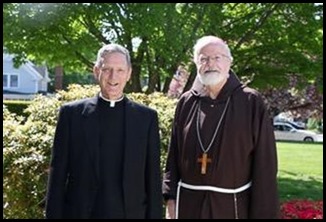 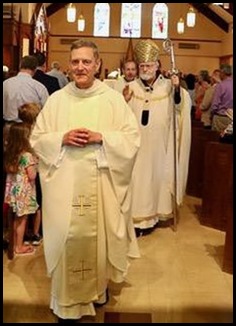 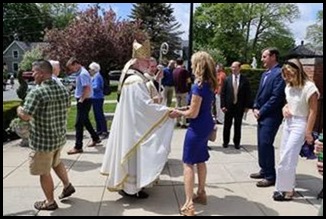 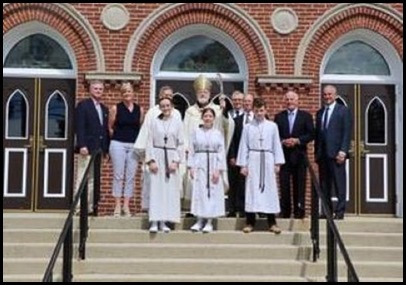 It was a very beautiful celebration and, afterward, they had a luncheon under a tent that they had put up next to the church. We were blessed with fine weather over the weekend, and it was just a beautiful day.

Sunday afternoon, I went to the Madonna Queen Shrine in East Boston to celebrate confirmations for about 90 young people of the Brazilian community in the archdiocese. 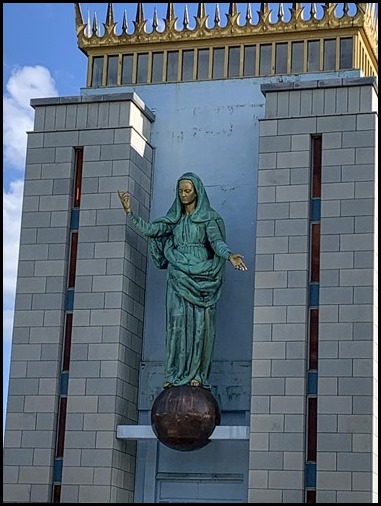 It was a wonderful celebration, and I was happy to be able to share with them news about my visit to their homeland and tell them of the Mass that I celebrated at the shrine of Aparecida on May 5.

Monday, we had a luncheon and meeting with the auxiliary bishops and episcopal vicars of the archdiocese at the Pastoral Center. It was the first time we gathered in person for quite a while. Up until now, we have mostly been meeting virtually, so it was good to have everybody come together once again. We were especially happy that Bishop John Dooher was able to join us.

Tuesday was our annual Spring Convocation for the presbyterate of the archdiocese. This was our first in-person convocation since the start of the pandemic, and I’m so happy that so many of our priests were able to join us. 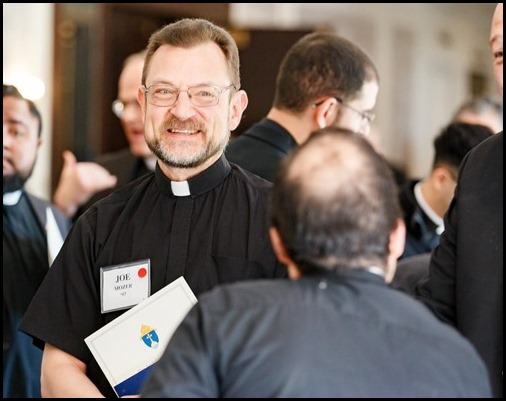 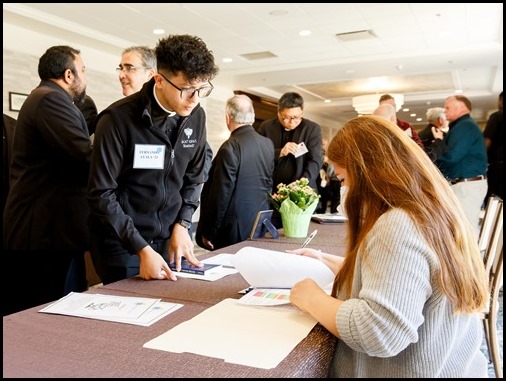 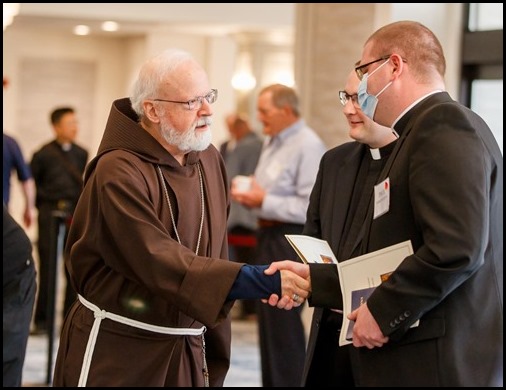 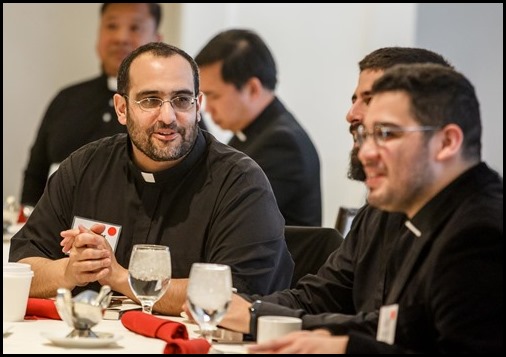 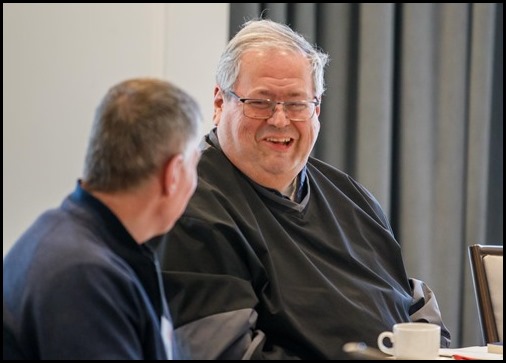 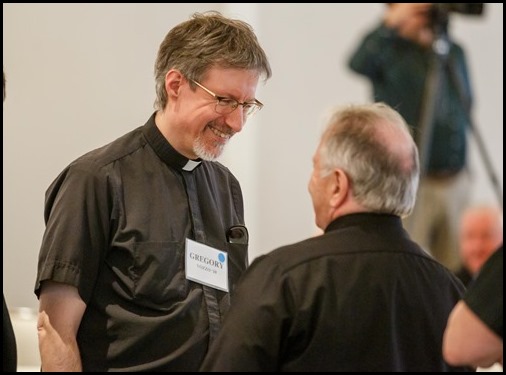 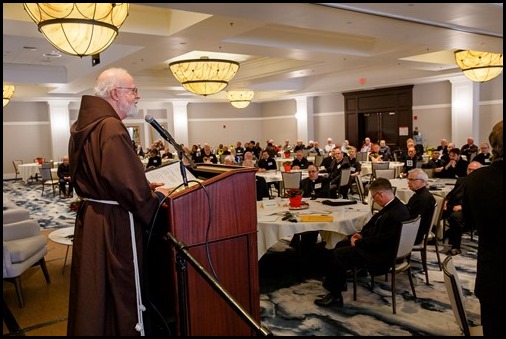 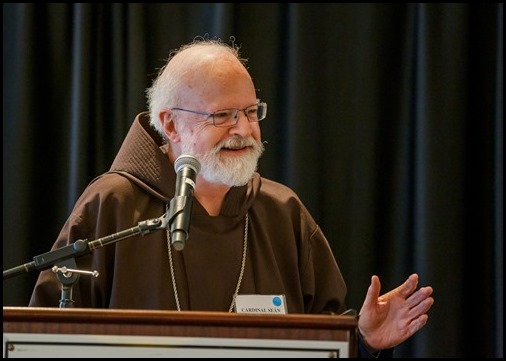 They did an excellent job of organizing a program that incorporated the personal witness of priests of the Archdiocese of Boston. Father John McInnis did a great job moderating the discussion on the topics of continued growth, spiritual development, personal conversion and ongoing formation. 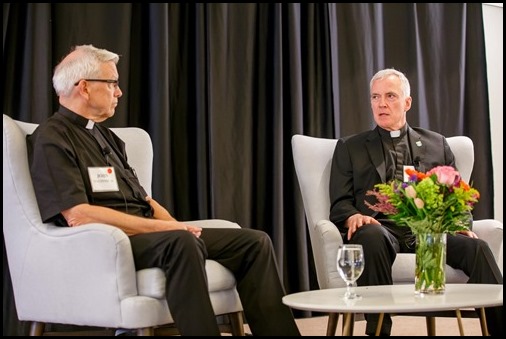 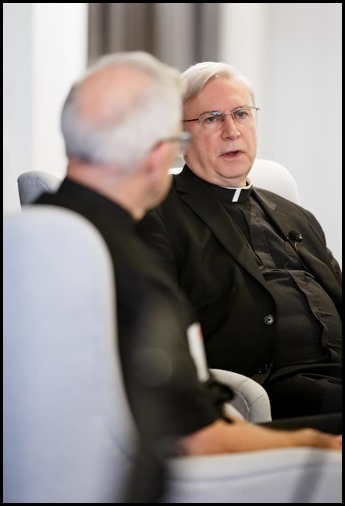 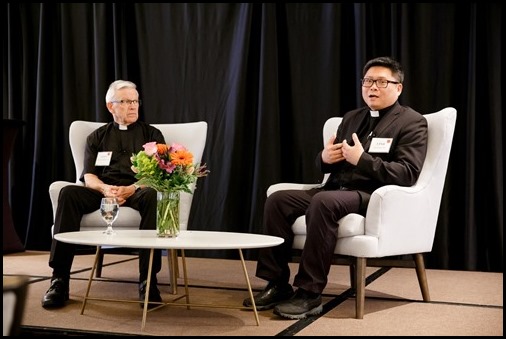 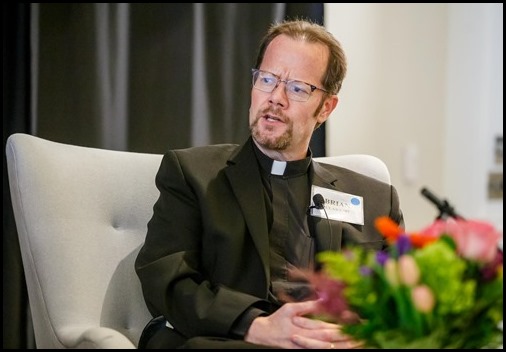 It was also an opportunity for us to congratulate our jubilarians as well as our transitional deacons who will be ordained to the priesthood on Saturday.

The convocation is a time when we single out and honor four priests for their exemplary service and ministry. The honorees each year are nominated by their fellow priests through the Presbyteral Council, and it’s always a great joy to recognize their service and accomplishments. 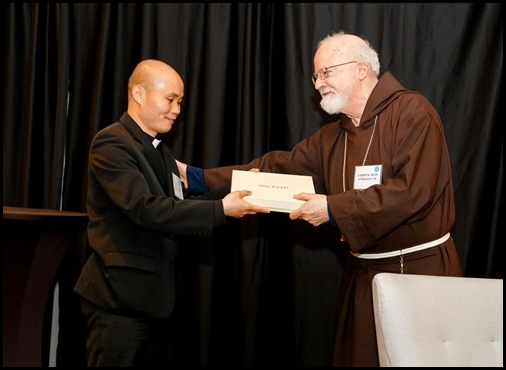 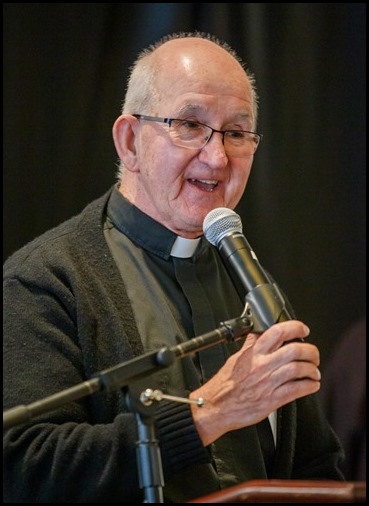 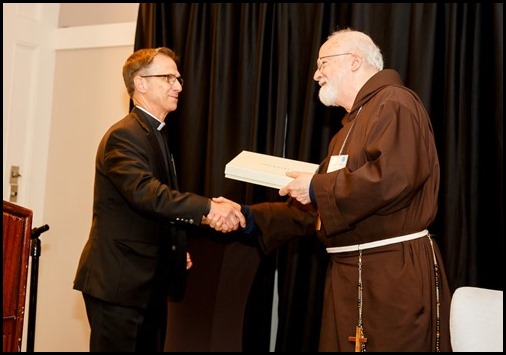 This year the priests honored were Father Huy Nguyen of St. Jerome and Immaculate Conception in Weymouth, Father Bryan Parrish of St. Joseph Parish in Needham, Father Charlie Higgins of St. John Chrysostom and St. Theresa of Avila Parishes in West Roxbury, and Father Tom Domurat of Most Holy Redeemer Parish in East Boston. We congratulate and thank them! 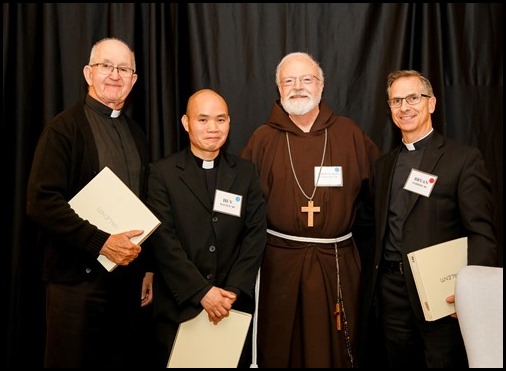 Wednesday, we had a virtual board meeting of Pope St. John XXIII National Seminary. 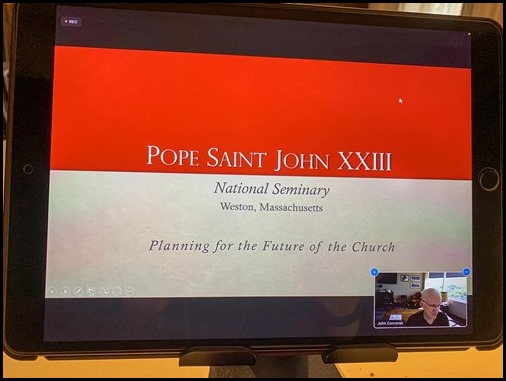 The seminary gives an extraordinary service to all the dioceses of the United States in forming men for the priesthood later in life. I echo the sentiment expressed by the seminary’s director of spiritual formation, Father Bill Murphy, at the priest convocation encouraging his brother priests to help identify candidates for Pope St. John.

Thursday, I met with Father Roberto, who is the provincial of the province of Capuchins in Turin, Italy. He came accompanied by some of our local Cape Verdean friars and Father John Currie. The provincial was here to visit the friars because the Cape Verdean jurisdiction comes under Turin. 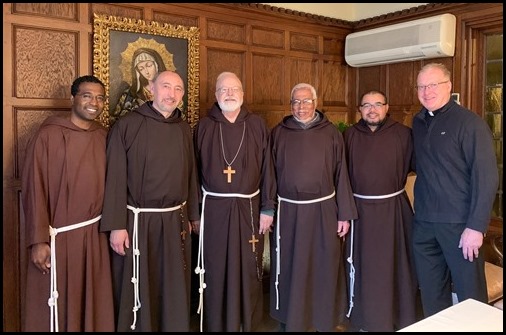 I told him how Father Pio Gottin, who was from his province, had been so venerated in the archdiocese. As I mentioned last week, Padre Pio was an Italian Capuchin who was brought to Boston by Cardinal Medeiros. He was stationed at St. Patrick’s in Roxbury and worked with the Cape Verdean community in the archdiocese for about 60 years. I was also able to express our gratitude for the presence of the friars from Cape Verde who serve our Cape Verdean immigrants here in the archdiocese.