Saturday, Bishop Mark O’Connell and I traveled to Loyola University in Chicago to attend the conference “Pope Francis, Vatican II and the Way Forward,” sponsored by Boston College, Fordham University and, of course, Loyola. 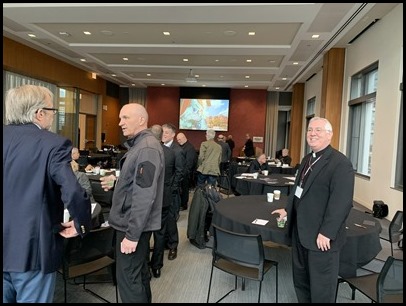 The event was a gathering of several dozen cardinals, bishops and theologians to discuss the themes of the Second Vatican Council and how to bring about greater unity in the Church through the implementation of the council. Attendees included Papal Nuncio Archbishop Christophe Pierre, Cardinal Blase Cupich, Cardinal Joseph Tobin, Cardinal Óscar Rodríguez, Archbishop Roberto Gonzalez and Archbishop Mitchell Rozanski. 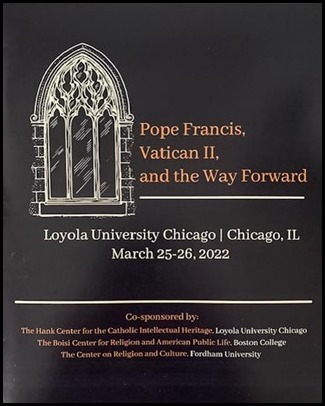 By Saturday, I was back in Boston to celebrate the installation of Father Matt Wescott as pastor of Christ the King, Our Lady of Lourdes and St. Edith Stein Parishes in Brockton.

When we arrived, we were greeted by the Brockton Fire Department Honor Guard and Pipe and Drum Corps playing bagpipes outside the church. 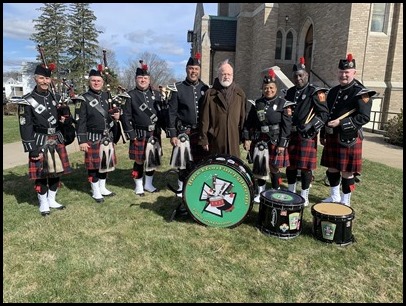 The church was packed for the beautiful celebration. They had three choirs and a veritable army of altar servers. In addition to the English-speaking parishioners, I was very happy to see many members of the Cape Verdean and Haitian communities were there with us, and the Mass was celebrated trilingually – in Portuguese, French and English. 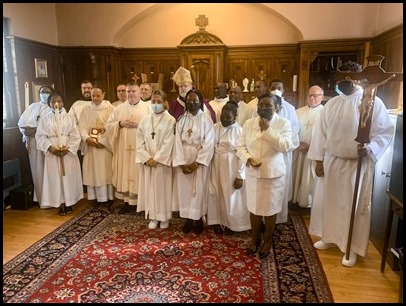 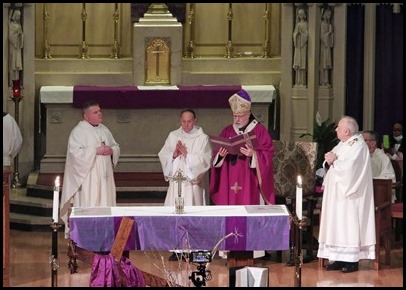 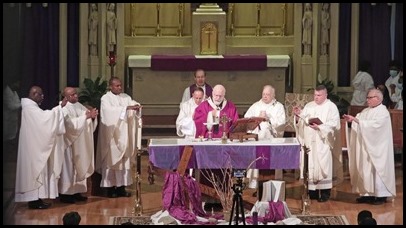 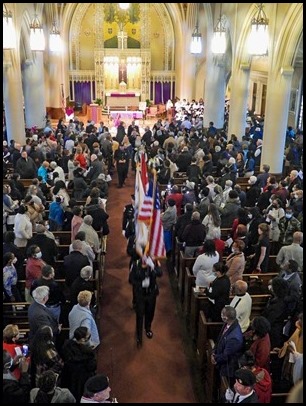 We were very pleased to be joined by Brockton Mayor Robert Sullivan and Fire Chief Brian Nardelli. Father Wescott’s family was there, as well. We were very happy to be able to recognize them and thank them.

Sunday, I was visited at the cathedral by the International President General of the Society of St. Vincent de Paul, Renato Lima de Oliveira, from Brazil. He was accompanied by our local council president, Robert Smith. They came to speak about some of their future plans to expand the society’s ministry, and I certainly encouraged them.

In our talk, President Lima de Oliveira was very complimentary of our local Vincentians. He said that, in addition to their important work of serving the poor, they are very faithful in maintaining the spirituality of the society. 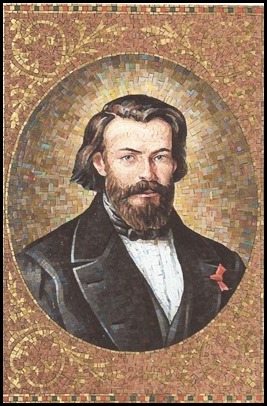 He also shared with me that there is hope that Blessed Frederic Ozanam’s cause of canonization will advance soon. I told him that I had been at Blessed Frederic’s beatification at the Cathedral of Notre Dame during the 1997 World Youth Day in Paris. I was the Bishop of Fall River at the time, and I attended with a group of our youth along with a group of our Vincentians. It was a wonderful celebration, and we were also able to celebrate Mass at Blessed Frederic’s tomb in the Chapel of the Institut Catholique. It was a very simple tomb and on the wall behind it was a depiction of the Good Samaritan, which I thought was very fitting.

Also, that day, I went to Wellesley to lead a prayer service at the wake of Jack Joyce. 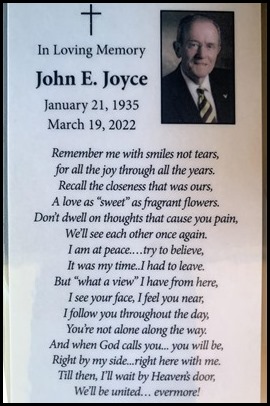 Jack was an extraordinary man and an outstanding Catholic. He was a great benefactor of the Church and Boston College, as well as a very active member of the Order of Malta and the Order of the Holy Sepulchre. He was also a principal organizer of the lunch we hold each year for our retired priests at the Boston College Club. So, I was very glad to have the opportunity to be there to offer my condolences and pray with the family.

Monday, I was visited at the cathedral by Mona Golabek, an extraordinary musician and writer who is the author of “The Children of Willesden Lane.”  The book tells the story of her mother, who was a survivor of the Holocaust. Her mother’s family was from Vienna, Austria, and she talks about their experience of the Kristallnacht and her mother escaping on the Kindertransport to England. 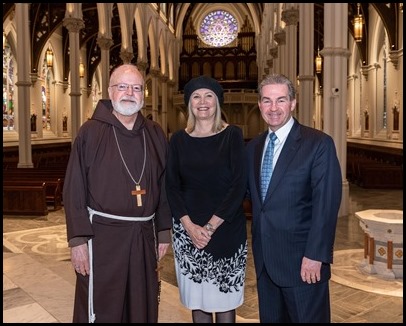 With Mona and Jim Walsh, the president of the Campaign for Catholic Schools 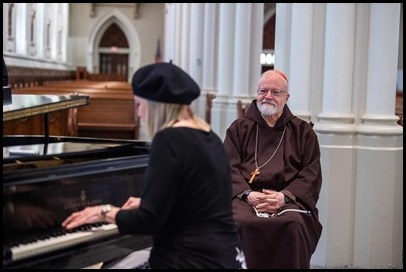 She has been the subject of PBS documentaries and has appeared in concert at the Kennedy Center, the Royal Festival Hall, and with major orchestras around the world.  With support from Steven Spielberg’s Shoah Foundation and the Archdiocese of Boston, the Willesden books are being used in our Catholic schools.   In fact, she went from the cathedral to some of our Catholic schools where she made this presentation. 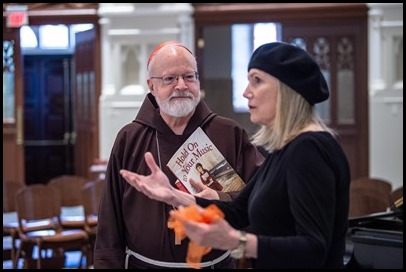 We are happy she could be here, and we hope to have her back in the archdiocese again soon.

Tuesday, I gathered with our recently ordained priests at the Pastoral Center. We hold this meeting about every six weeks or so, and we come together for a meal, a time of discussion and a holy hour. Previously, we had been having these gatherings virtually, but we are pleased we are now able to be all together in person at the Pastoral Center. There were about 45 priests with us at this gathering. 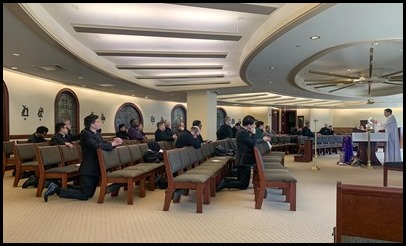 We had a very animated discussion about priestly spirituality and other issues they raised during our time together. I always find it very life-giving to have this opportunity to be together with our young priests.

That evening, our vocation directors, Father Michael Zimmerman and Father Eric Cadin, accompanied me on a visit to Our Lady of Providence Seminary to celebrate Mass for the college seminarians there. We were joined at the Mass by Bishop Bob Evans and, of course, the rector, Father Christopher Murphy. 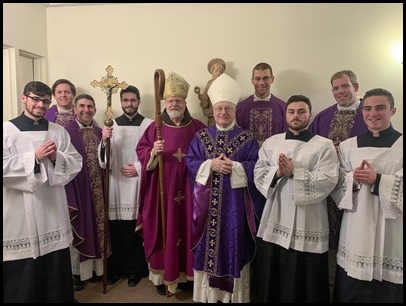 Our college seminarians from Boston are among those who attend Our Lady of Providence. They study at Providence College and receive their formation in the seminary community, and we are very grateful to the Diocese of Providence for making this available for the dioceses of New England.

After Mass, we had dinner and an opportunity to sit and talk with the seminarians. They are a fine group of young men, and it’s always very encouraging to be with them.

Wednesday, we had one of our semi-annual gatherings of the bishops of the Boston Province, which includes the dioceses of Massachusetts, New Hampshire, Maine and Vermont. It’s an opportunity to speak about issues that affect the region and the U.S. Bishops Conference.

Among the items we discussed was the proposed propaedeutic year for our seminarians. The Holy See is anxious that seminarians have an initial training that is not so much ecclesiastical studies but a time of human formation and spirituality — almost like a novitiate — to begin their seminary experience. “Propaedeutic” means “introductory instruction,” and so this is referred to as a propaedeutic year.

This is still in the planning stages, and we have yet to work out how it will look for our seminarians going forward. But recently, our vocation directors and rectors met in Providence to discuss how it could affect St. John’s and our own seminarians, and we wanted to share some of their thoughts.

Yesterday was a day packed with Zoom meetings. We began with a meeting of the archdiocese’s Finance Council, followed by the Personnel Council, then the Presbyteral Council and finally the College of Consultors. It was a long day of meetings, but we accomplished many important things.

We are very grateful to all those who dedicate their time to serving on these important councils.