Consecrating Ukraine and Russia to the Blessed Mother

Last Saturday, after many years of consultation and work, the Holy Father promulgated the new Constitution on the Roman Curia, “Praedicate Evangelium.” Many of the ideas contained therein have already been implemented by the creation of new dicasteries and policies within the curia. Still, it certainly pulls together many of the themes of Pope Francis’s pontificate and has evangelization as its unifying theme. As I always say, if the Church exists to evangelize, the curia must exist to evangelize, also.

Among the changes it implements is the upgrading of our child protection commission to become a full office that will be connected with the Congregation for the Doctrine of the Faith and have the responsibility of working to promote a culture of safeguarding within the curia itself. In addition, the Holy Father has also initiated a new section of the Secretariat of State to promote the spirituality and pastoral care of those working in the Holy See.

This past weekend, I had the joy of celebrating the baptism of Isabel Lobão, whose parents, Carolina and Martim, I had married and also baptized. (I also presided at the weddings of their parents and their eight brothers and sisters!) Isabel is named after her grandmother, who was with us for the celebration. 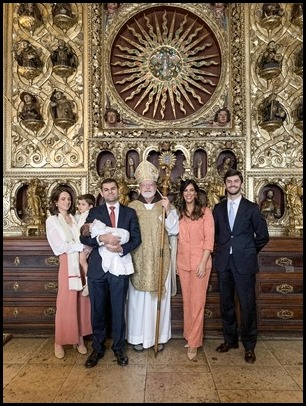 The baptism was held on the feast of St. Joseph, and we dedicated the baby to St. Joseph.

It was held at a beautiful church in Lisbon, São Nicolau, where some of our Boston seminarians have stayed while studying Portuguese. 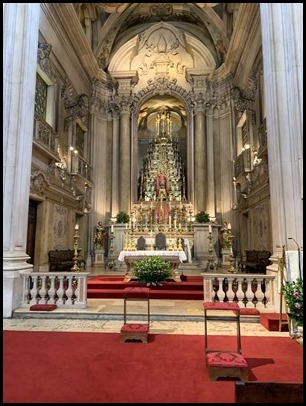 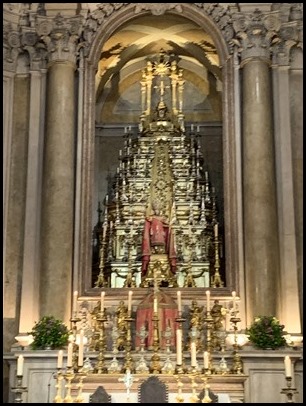 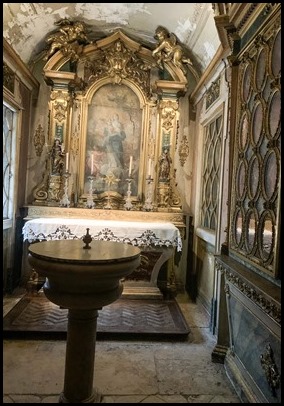 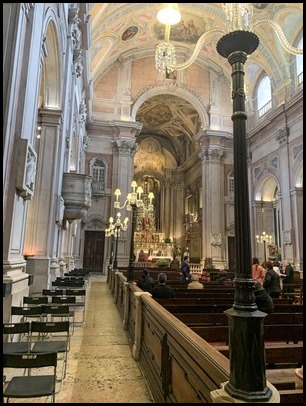 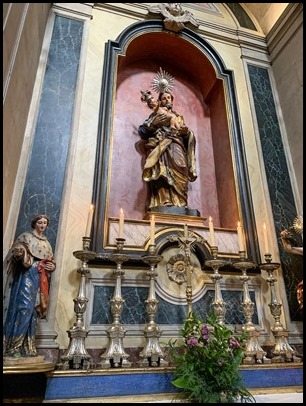 The have beautiful altar to St. Joseph in the church 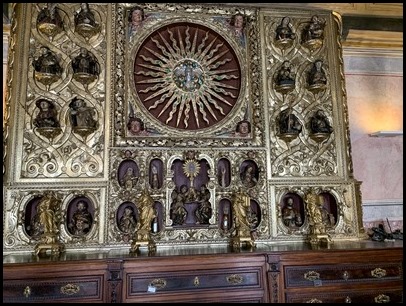 The retablo in the sacristy is just spectacular

The church is right in the heart of Lisbon and not far from the Praça do Comércio, which will certainly be a site for some of the events at next year’s World Youth Day.

My trip was very short because I had to fly to Washington for a meeting of the Board of Trustees of the Catholic University of America on Monday.

At the meeting, our principal task was to elect a new president for the university to replace John Garvey, who is retiring. The search committee considered about 160 candidates for the position, which they whittled down to a shortlist for presentation to the board. After the board voted, the chosen name was presented to the Board of Fellows and will now be sent on to the Congregation for Catholic Education for approval by the Holy See. Once the Holy See gives its approval, the name will be announced. (Sorry, there will be no spoilers here!)

Monday night, I returned to Boston to preside at the funeral of Father Michael MacEwen, which was held on Tuesday at St. Patrick’s in Natick, a parish where he had been pastor. 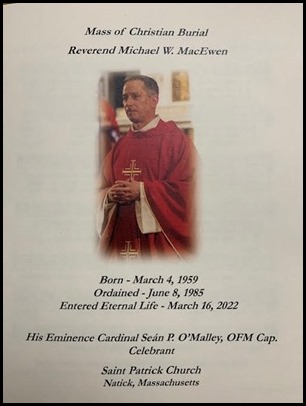 The church was packed with over 60 priests and Father Michael’s family, friends and those who had been impacted by his ministry. He was a man who had great pastoral skills and served as a mentor to many other priests. He was also a man who had a great gift of friendship. So many, many of his priest friends and parishioners gathered to bid him farewell.

His classmate, Bishop Robert Reed, gave a very moving homily in which he reflected on Father Michael’s life and the theme of vocations and priestly ministry.

Father Michael was very close to his family and chose to spend his last days with his sister and her family. I was able to visit him there about a week before he died. At that point, he was still very conversant, and it was an opportunity for me to express our gratitude to him for his ministry, fidelity and the witness he has given to all of us. He will be sorely missed.

Thursday, I went to Naples, Florida for a meeting with about 50 of our benefactors of the archdiocese, many of whom spend the winter months in the area. The gathering was hosted at the home of Kevin and Rita Gill, and it was an opportunity for me to thank them for their support and speak to them about some of the needs of the archdiocese.

Finally, today, in response to the Holy Father’s appeal for the Church throughout the world to join him in consecrating Ukraine and Russia to the Immaculate Heart of Mary, we held a special Mass at the Cathedral of the Holy Cross.

We were joined by representatives of the Ukrainian community, including Father Yaroslav Nalysnyk, the pastor of Christ the King Ukrainian Catholic Parish and Myron Kravchuk of the Ukrainian aid organization UkraineForward.org. 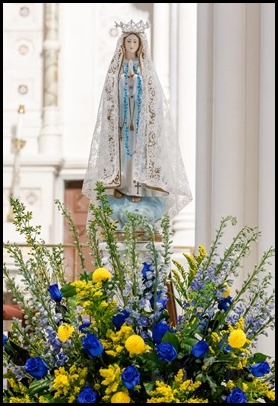 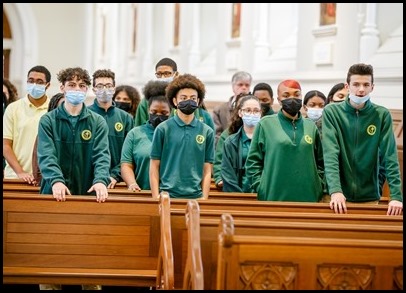 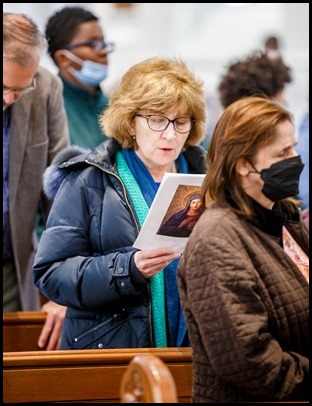 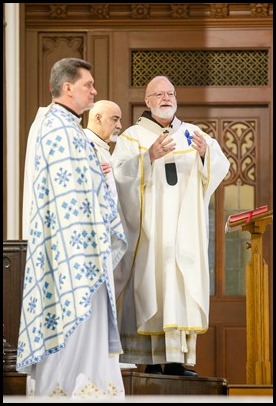 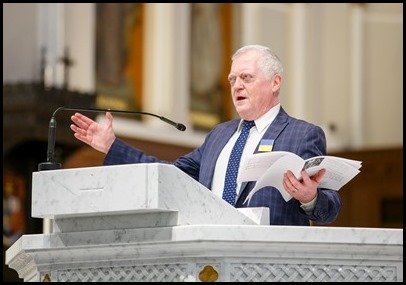 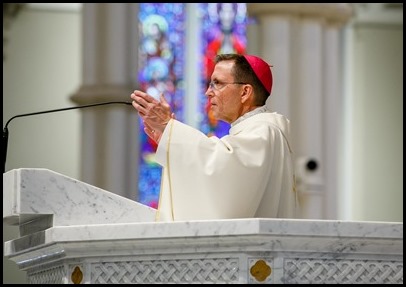 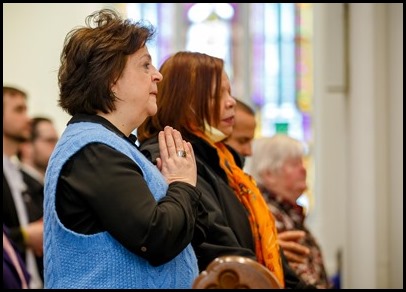 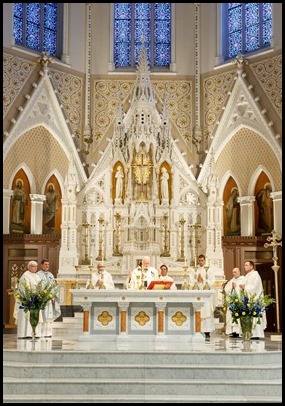 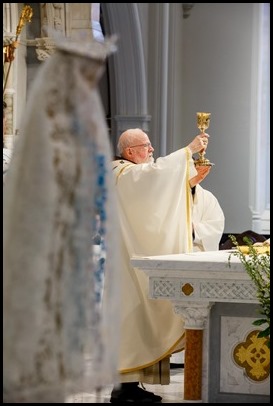 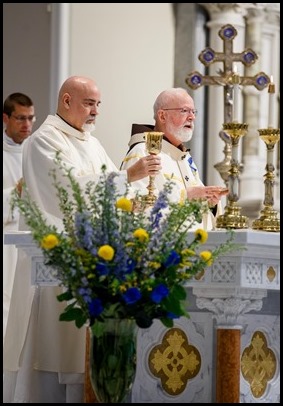 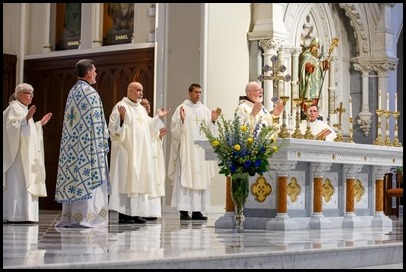 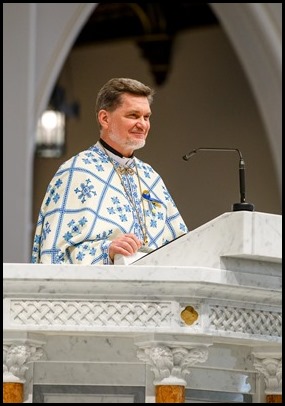 Bishop Reed was our homilist for the Mass, after which I offered some remarks and led the prayer of consecration. 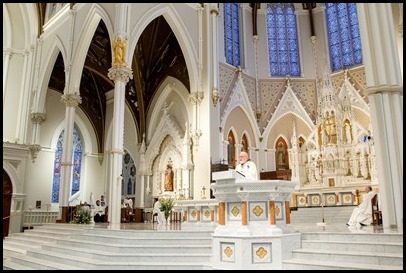 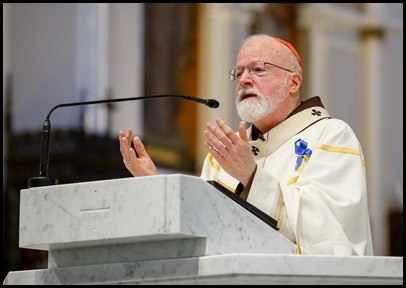 Our gathering concluded with Bishop Reed leading a rosary for the people of Ukraine. 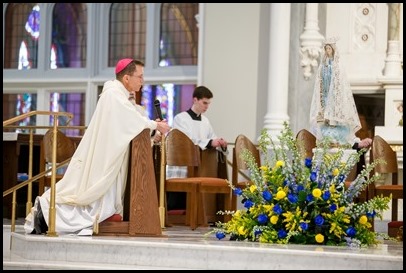 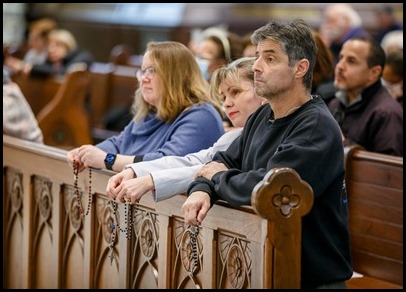 As I shared in my remarks, I grew up in the days of the Cold War when, after every Mass, we had prayers for the conversion of Russia and the end of the Cold War. Those prayers were answered, and I have great faith that the power of prayer can change the terrible situation that we are facing now. So, I reiterate the Holy Father’s invitation to all Catholics to join their prayers with those of people throughout the world for peace and justice for the people of Ukraine and for the safety of their military, their people and their refugees.