With last week’s beautiful profession ceremony of two young women making their perpetual vows as Daughters of Mary of Nazareth, we have had three religious professions of women in the archdiocese during this last year. The young women who are embracing religious life come out of a new generation of Catholics who tend to be more traditional, seeking religious life in communities that have a common prayer life, shared ministry and religious garb. The same phenomenon is seen in the young men who are coming to the seminary and the religious orders of men. In the Church in our country, they represent the young practicing Catholics who stand out in contrast to the many young cultural Catholics and tend to be more traditional in their faith and their expression of Catholicism.

Some people might consider the terminology “traditional” or “conservative” as an indictment of this generation of Catholics, but I see it as a description of young Catholics buffeted by the headwinds of secularization in a culture of unbelief. They are often coming to the seminary and religious life with little in the way of the support or encouragement from family and friends that the people in my generation experienced when we made a vocational choice. Our young men and women choosing priesthood and consecrated life today are making a very costly and countercultural choice.

In many ways, I am very happy that our young clergy care deeply about the content of the faith, are happy to wear clerics, are committed to celibacy and love the Church’s liturgical tradition and piety. I share all of those sentiments deeply, but I worry when seminary professors express to me their concern that seminarians and young priests are influenced by the toxicity of some social media. Like all bishops, I want our priests to find joy in their vocation, the joy that can be robbed by the negativity and anger that often characterize a social media that is quick to judge and condemn, imputing the basest motivation to the people they are anxious to attack.

Christ meant for the Church to be his family. At times we have become a dysfunctional family. That dysfunction can be overcome only by recommitting ourselves to the values of the Gospel, a deeper life of prayer and patient dialogue.

It is my ardent hope that the synodal process that Pope Francis is presenting can be a path to greater unity in our Church, a unity built on shared prayer and patient listening. Throughout the 2000-year history of the Church, there have been so many great challenges, but since the times of the Acts of the Apostles, the Holy Spirit has guided the community of faith.

The task of evangelization is greatly hindered when we are not united with each other and with the Holy Father. Christ prayed for unity among His disciples and gave us the new commandment, which obliges those of the household of faith to cultivate a special love for their brothers and sisters, as fellow members of Christ’s Church.

In this Christmas season, I call on all our priests, deacons, religious and laity to work together to forge a greater unity in a world where there are so many divisions and so much pain. I pray that in this New Year, the Lord will give us the humility and patience that we need to bring about reconciliation and healing. Pope Francis has pointed out that the path to holiness is prayer and community. Let’s put these at the top of our New Year’s resolutions, realizing that in our history the Church has overcome every crisis only by producing witnesses of holiness.

On Christmas Eve morning, I was very pleased to join Angela Menino and many other members of the Menino family for their annual holiday distribution at Catholic Charities’ Teen Center at St. Peter’s in the Bowdoin Geneva section of Dorchester. The Teen Center does tremendous work in that neighborhood, particularly with the Cape Verdean community. 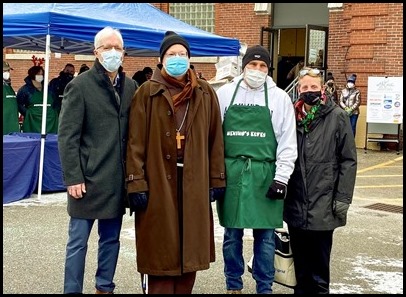 Prior to the pandemic, they would traditionally arrange for a very large number of toys and bicycles to be distributed to the families. However, given the realities of the pandemic and the economic crisis many are facing, it was decided that they would distribute food baskets to local families. 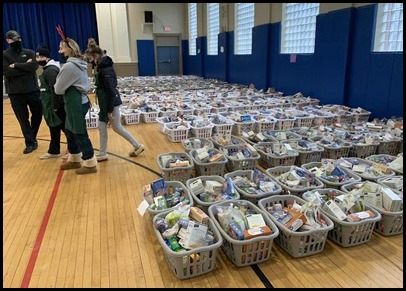 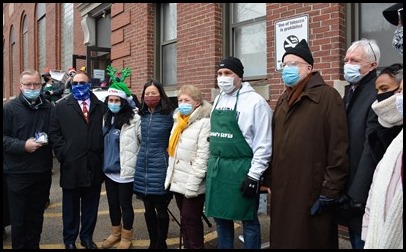 Following that visit, I went to Pine Street Inn to greet the residents there. We assembled outside, and the residents came to receive gifts of scarves, gloves and other warm clothing. 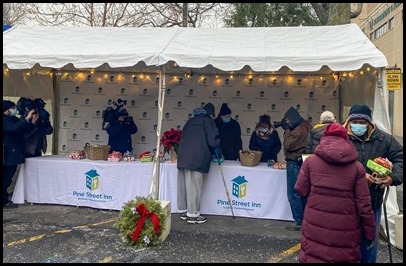 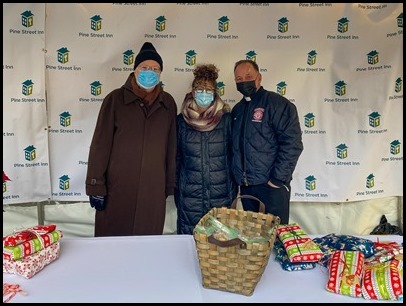 The shelters, of course, are very challenged because they depend so greatly on volunteers at this time of year. But because of the pandemic, those volunteers, who are often older, are unable to come. 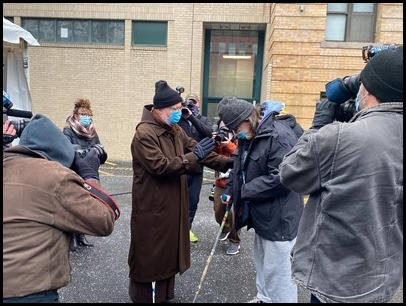 This event always attracts many members of the media, and it is an opportunity for us to remind people of the great challenge of homelessness in our country. Currently, in the U.S., there are over half a million people who are homeless. All of us must try to look for ways to address this challenge right here in our own community, where so many people are suffering because of the shortage of housing, drug addiction and mental illness.

That night, I celebrated the midnight Mass at the cathedral. I was very gratified that, despite all the challenges of the pandemic, so many people came out to celebrate Christmas with us. The cathedral was filled for the vigil Masses as well as the Masses on Christmas Day. 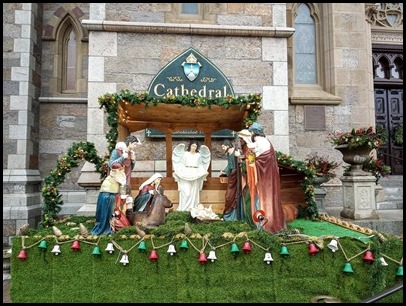 Of course, the music program was spectacular. I think the recent article by Thomas Farragher in the Boston Globe helped a lot of people to realize what a beautiful program we have for Christmas, and some came for the first time, having read about it in the newspaper.

Christmas morning, we had the televised Mass from the Cathedral of the Holy Cross. Once again, Richard Clark at the Cathedral choir did a tremendous job with the music program.

I also celebrated the 11 a.m. Christmas Day Mass with my friend, Father Simeon Gallagher, who is visiting. 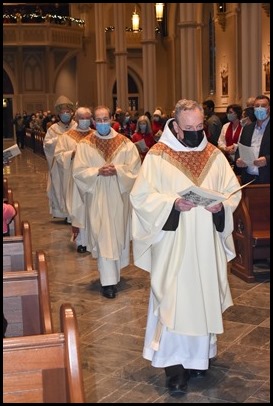 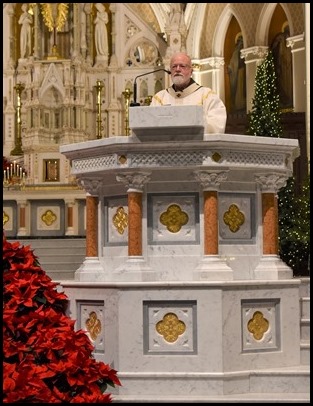 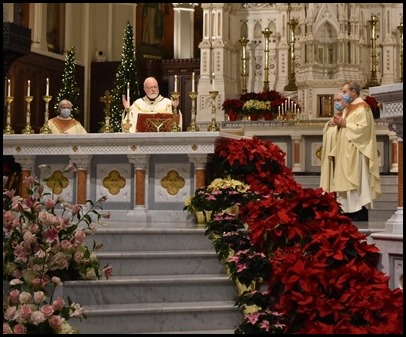 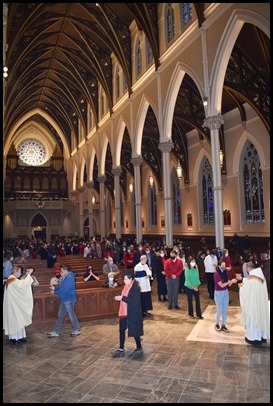 That evening, we went to the Capuchin Friary in Jamaica Plain for Christmas dinner. Brother Jim and the friars prepared a wonderful meal for us.

While we were there, they showed Father Simeon the van the friars use in their ministry to the homeless. 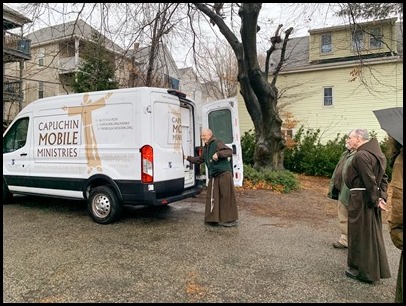 On Thursday, I was very happy to be able to celebrate the wedding of Andrew Stevens and Natalie Pyne at St. Patrick’s Church in Jupiter, Florida. Andrew is the son of my cousin. 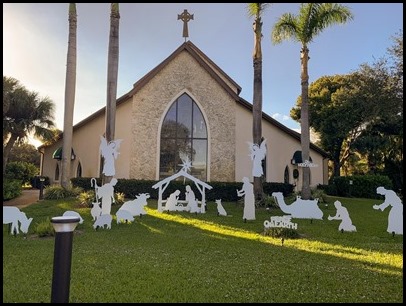 It is always a great joy to celebrate a wedding, and it was wonderful to be able to see many members of my family during this Christmas season. 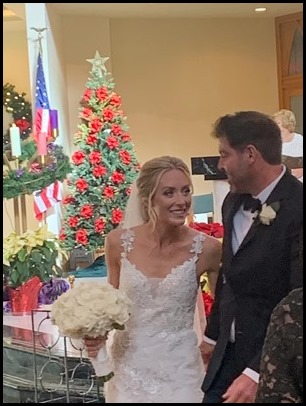