Celebrating 500 years of Christianity in the Philippines

Last Thursday, I was very happy to participate in the virtual Adopt-a-Student celebration held for Cathedral High School. We are very happy that they were so successful in raising scholarships for the students at Cathedral High, which is doing a spectacular job of forming inner-city children. For the last 15 years now, they have had a 100 percent graduation rate, and 85 percent go on to graduate from four-year colleges.

We are so grateful to the Board of Trustees and the very faithful alumni who raise so much money to keep the schools thriving.

Friday, I went to St. Agatha Parish in Milton to attend the funeral Mass of John Quinn, the brother of Father Peter Quinn. It was a beautiful celebration. 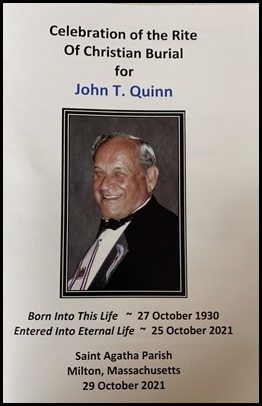 His brother Jack was very involved in the Church. I enjoyed Father Peter’s reflection, in which he said his brother would always ask his grandchildren what Mass they had been to on Sunday. It reminded me very much of my father!

Saturday, I went to Holy Name Parish in West Roxbury for a Mass with the archdiocese’s Filipino community to mark the 500th anniversary of the arrival of Catholicism in the Philippines. It was a lovely celebration, and I was delighted to see how many people came out for it. The terrible weather that day did not seem to dampen people’s spirits. 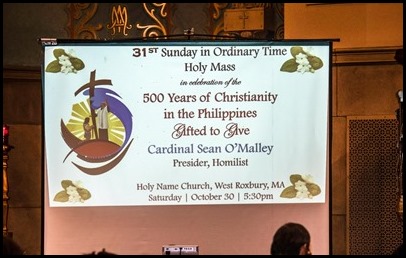 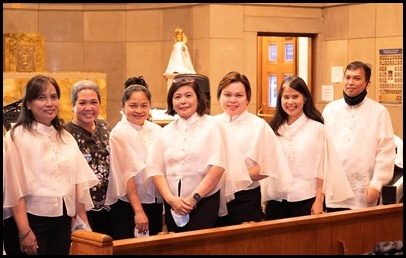 They had the statue of Nuestra Señora de Paz y del Buen Viaje, who is one of the patronesses of the Philippines, along with images of other popular Filipino devotions. 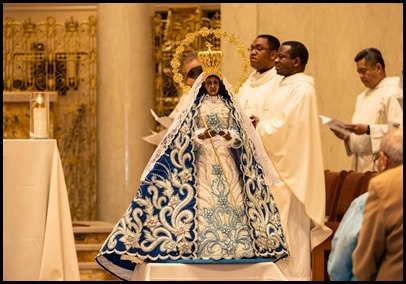 The Philippines is one of the largest Catholic countries in the world, and about 10 percent of their people are working abroad in the diaspora because of the economic situation there. And wherever they go, they take their faith with them. Pope Francis made a beautiful statement about the 500th anniversary, in which he spoke of Filipino workers “smuggling the faith throughout the world.” I thought it was a great expression. 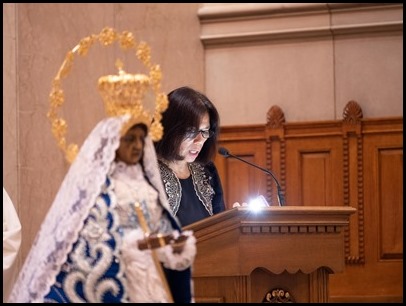 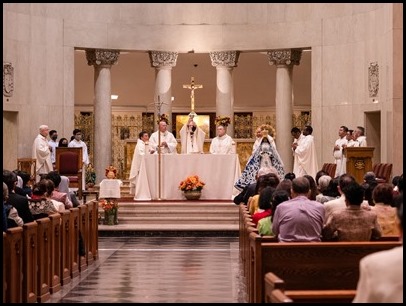 When I was in the Virgin Islands, we had a small Filipino community, many of whom were doctors and nurses who had graduated from Santo Tomas University in Manila. They were wonderful Catholics and truly the pillars of the healthcare system. I used to have an annual Mass with them for the feast of San Lorenzo Luis. I was thinking about them during the pandemic when I read that one-third of the nurses in the United States who have died taking care of the sick were Filipino.

I also used to have a Mass for the Filipinos working on cruise ships that would come to the Virgin Islands. A cruise ship can have 1,000 to 2,000 passengers and just as many crew members. Typically, I would have a Mass for them at 10 or 11 at night, after they finished their work for the day. Many of them would talk about having not seen the children for a year and the children being with the grandparents and sending money back to support them.

I also think of our friars working in the Arab countries such as Qatar and the United Arab Emirates, who report that the Catholic Church there is thriving because of the large number of Filipino workers in that region. So, they truly are carrying the faith throughout the world.

Sunday, I went to St. Mary of the Assumption Parish in Brookline to bless the renovations to their lower church. The renovations came out splendidly. The parish was also celebrating its Oktoberfest. Father Jonathan Gaspar had an oompah band playing, so I was able to sing along with some German songs. 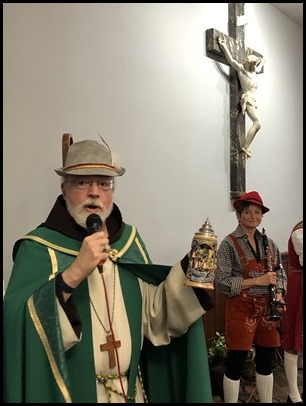 It was a lot of fun, and they had just beautiful weather for it.

That afternoon I had a meeting of our Survivors Advisory Committee, organized by Vivian Soper, the director of our Office of Pastoral Support and Outreach. During the pandemic, it has been difficult to gather in person, so we were glad that Vivian was able to make the arrangements for them to come to the cathedral.

This committee has been very generous with their time and has been a great help to us. They have also reached out to many survivors to try to bring them healing and reconciliation with the Church. They have also addressed our seminarians and different parish groups to speak about safeguarding. We are very grateful to them, and so I was very pleased to be able to meet with them in person once again.

Monday was the Feast of All Saints, and I celebrated the 6 p.m. Mass at the Cathedral of the Holy Cross. 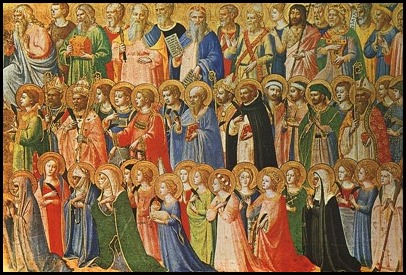 Tuesday was, of course, the Feast of All Souls. And while priests can always celebrate extra Masses in the case of pastoral need, the Church provides that on Christmas and All Souls Day, every priest may celebrate three Masses. Through this, the Church is emphasizing the importance of praying for the faithful departed. So, I always look forward to celebrating the three Masses on that day.

It’s a time when I pray in a very special way for my parents and the many relatives, friends, coworkers, priests, fellow Capuchins and religious who have passed into eternity but were such a big part of my life. It’s a beautiful feast day, and I am very grateful that we have it in the Church’s calendar.

That day, I was visited by Father Jim DiPerri and his aunt, Sister Barbara Ann. Sister had worked here in the diocese and in many inner-city schools with the Daughters of Charity. 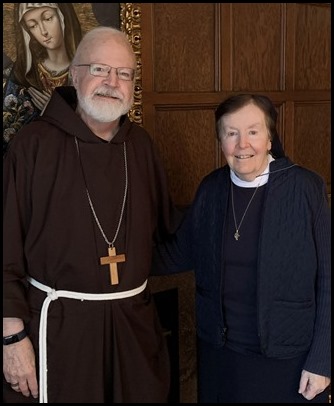 She was in town visiting, and they stopped by the cathedral to greet me and see the renovations.

Also, on Tuesday, we had a meeting of the Board of Trustees of the Catholic University of America. The Catholic University is a very important part of the ministry of the U.S. bishops, and I am very privileged to have been associated with the university for over 50 years. So, I’m happy to be working with them. 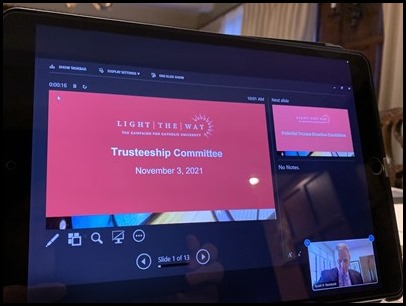 One of the challenges before us is identifying a successor to President Garvey, who is retiring next year. And, of course, we are always working to surface names of potential new board members.

Wednesday afternoon, Father Phong Pham and some of his parishioners from Blessed Andrew Phu-Yen Parish joined me at the Cathedral of the Holy Cross for the recording of the Mass that will be included as part of our virtual Social Justice Convocation, which will be held on November 13. 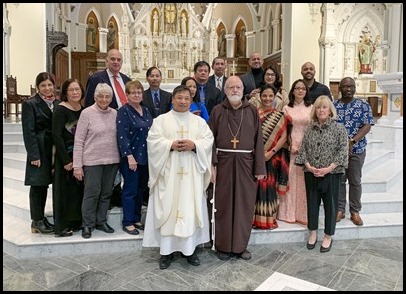 I hope all of you will be able to join us for this very important event which will feature talks by papal biographer Austen Ivereigh and our own chief healthcare ethicist, MC Sullivan. 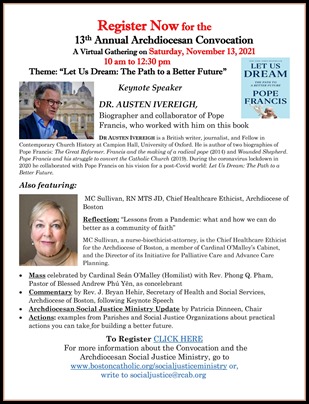 Thursday morning, we had a meeting of our Archdiocesan Finance Council. 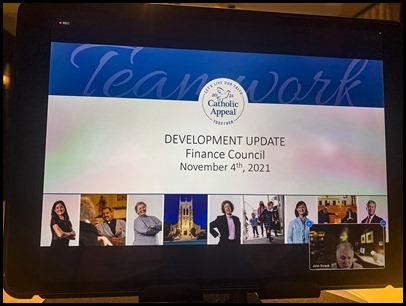 This was our first gathering since the death of John Kaneb. So, during our meeting, we noted the great contributions that John made over the years as an outstanding layman in the archdiocese. He gave so many hours of service to numerous projects, including, of course, his work with the Clergy Trust, which was just extraordinary. He will be sorely missed but fondly remembered for his great love of the Church manifested in so many ways.