Every year the Celebration of the Priesthood does a wonderful job of highlighting the vocation of the diocesan priesthood. This year’s celebration is no exception. 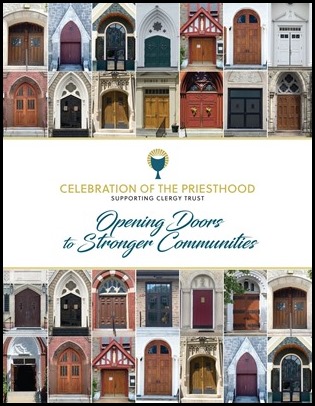 The fact that, even though the celebration was virtual, such a large amount of money was raised to support our priests is a very encouraging sign that our Catholic people love their priests and want to make sure that they are taken care of.

I know many of you watched this year’s virtual Celebration of the Priesthood live, but I’d like to share it here for those who did not have a chance to see it.

Each year, Massachusetts State Court of the Catholic Daughters of the Americas holds their “Pennies for the Unborn” campaign around the January 22 Roe v. Wade anniversary to support the archdiocese’s Fund for the Unborn. The fund provides material assistance to clients served by the Pregnancy Help ministry of our Pro-Life Office.

So, last Friday afternoon, Past State Regent Nancy Meehan and Second Vice State Regent Carol Ghiloni came to present a check for the $10,000 that was raised during this year’s campaign — a remarkable achievement considering it was conducted during the pandemic. They were accompanied by Marianne Luthin, the director of our Pro-Life Office. 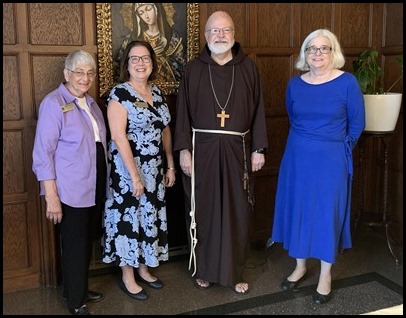 We are exceptionally grateful to the CDA, which continues to be the largest donor to the Fund for the Unborn.

Saturday, I went to the Capuchin Friary of San Lorenzo in Jamaica Plain, where they were holding a discernment weekend. 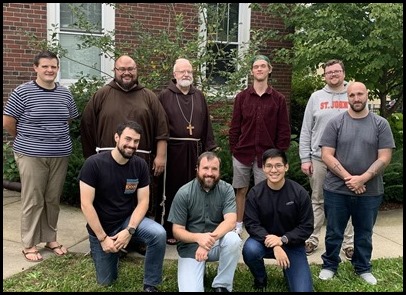 I was happy to join them for lunch and meet the young men.

Sunday, I went to Sacred Heart Parish in Weymouth to celebrate a Mass for the parish’s 150th anniversary. As some of you may remember, the parish church burned down several years ago and has been beautifully rebuilt. It’s a very vibrant parish that is now part of the Sacred Heart- St. Thomas Moore Collaborative. 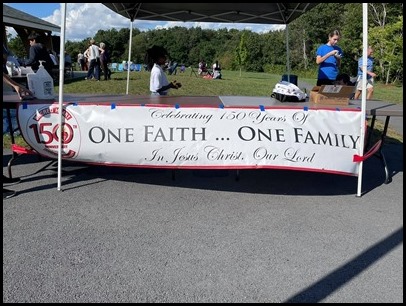 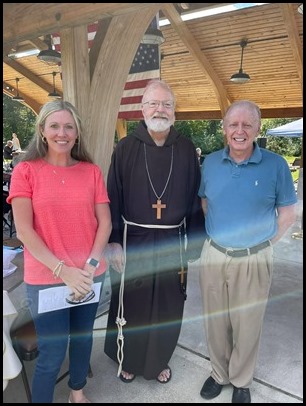 Concelebrating with me was the pastor, Father Sean Connor. 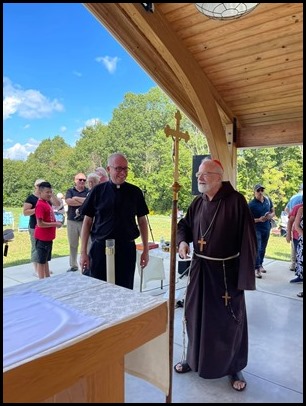 They had the idea of celebrating the Mass outdoors in a park nearby the parish. It was a very beautiful setting. The altar was set up under a large pavilion, and the people sat in the pavilion or the lawn in front. 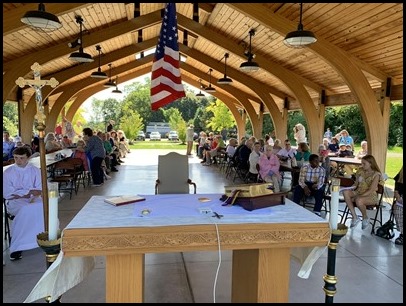 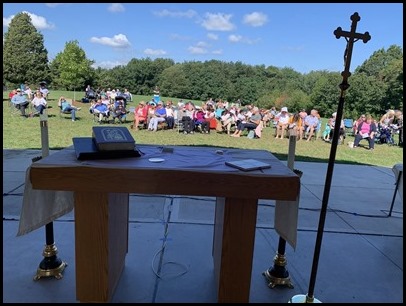 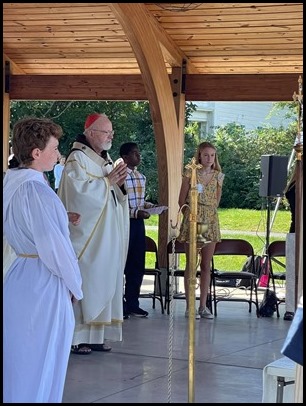 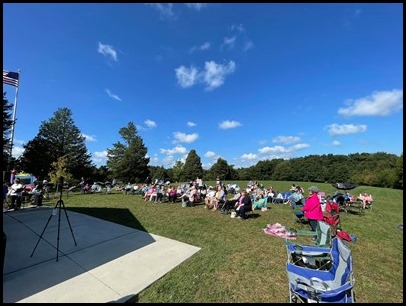 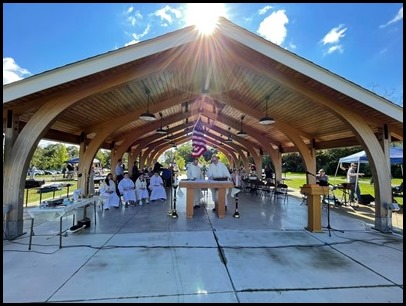 They had a very large group of musicians and singers. 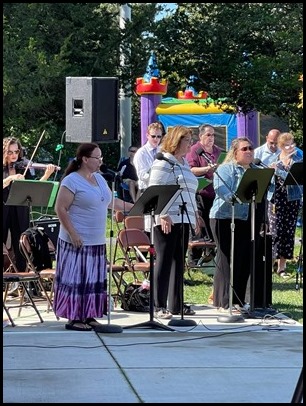 It was a beautiful celebration followed by food and entertainment. 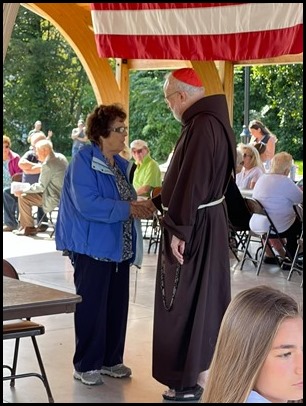 That afternoon, I was visited by Sister Briege McKenna, OSC, who is very well known for her ministry of giving retreats to priests. In the past, she has given a retreat for our diocesan priests at the winter retreat that Bishop Hennessey organizes each year. This week, she was in town to give a retreat in the North Region organized by Bishop Mark O’Connell. 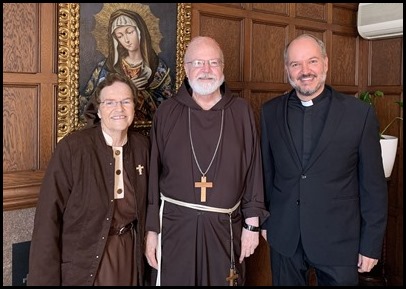 She came accompanied by Father Pablo Escrivá de Romaní, a priest of the Archdiocese of Madrid who works with her. He is a missionary who has worked in Ukraine and is now working with indigenous people in Costa Rica. Interestingly, he is the nephew of King Baudouin and Queen Fabiola of Belgium. Queen Fabiola was from a Spanish noble family, and both she and King Baudouin were very devout Catholics. I have to say, I wasn’t expecting to be visited by royalty!

Sunday evening, I went to Sacred Heart Parish in East Boston for a dinner with the priests of the Priestly Fraternity of St. Charles Borromeo, who staff the parish. We are very blessed to have different groups of the Communion and Liberation movement in the archdiocese — the Memores Domini consecrated lay people, the CL laity, as well as the Priestly Fraternity of St. Charles Borromeo. 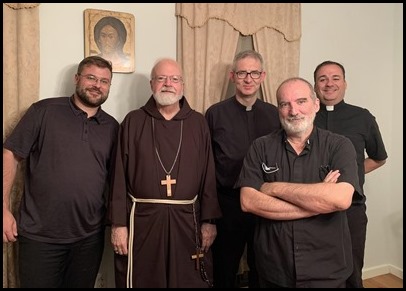 The priests of the fraternity here in the archdiocese serve at Catholic high schools, Our Lady of Good Voyage Chapel in the Seaport District and, of course, Sacred Heart. We are very grateful for their presence and their willingness to share their charism and spirituality with the people of the archdiocese.

Given the recent events in Afghanistan, we thought it would be good to reach out to our chaplains who have served there. So, we hosted a lunch for them on Wednesday. Though not everyone was able to be there, we had a very good number who were able to join us. 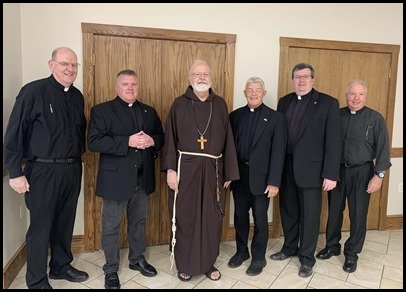 It was very inspiring to hear about their experiences serving as chaplains in a war zone. They all said what a privilege it was to be the face of the Church to the young men and women who were facing such danger while serving our country.

In the archdiocese, we are very blessed to have the wonderful tradition of sending men to serve as chaplains in the Armed Forces, and I’m very disappointed that many dioceses do not avail themselves of that opportunity. When I ask bishops why they don’t send men to serve the military, they often say, “Well, when men have gone from our diocese to serve as military chaplains, they never come back.” My rejoinder is, “Then you’re sending the wrong people!”

I say that because we’ve been blessed not only by the extraordinary ministry of our men while they are in the service, but when they come back to the archdiocese, they come enriched by the wonderful leadership training and experiences they have had. It truly is a great blessing.

That evening, I was very happy to go to Weston for the annual Lawn Party to support Pope St. John XXIII National Seminary. Like most such celebrations, last year’s Lawn Party was held virtually, but we were happy to be back together again in person. 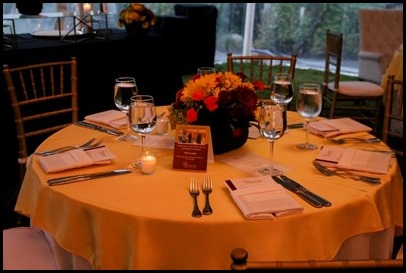 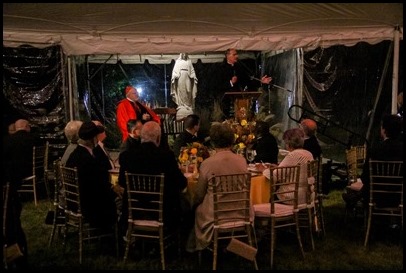 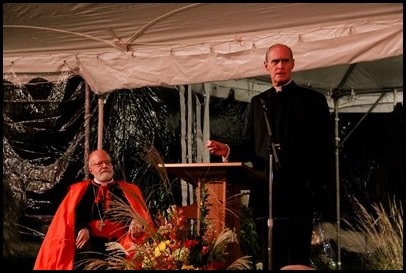 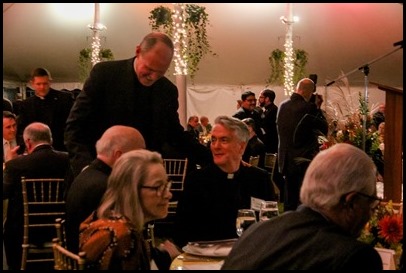 Besides the many benefactors in attendance, we were pleased to be joined by Bishop McManus of Worcester and Dom Vincent, the abbot of St. Joseph’s Trappist monastery in Spencer. And, of course, we are always very happy to see the many priest alumni who return each year to be part of this celebration. 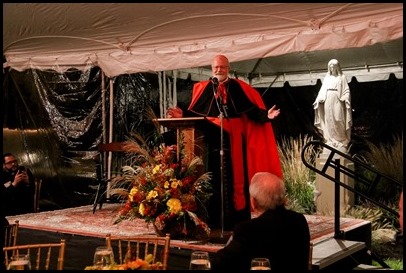 In my remarks, I noted that I was a visitator to about 20 seminaries in Latin America. So, I’ve seen a lot of seminaries, but Pope St. John is unique in its special emphasis on second-career vocations. This has allowed many men to become priests who otherwise probably never would have been ordained. If a younger man doesn’t go to one seminary, he’ll probably find another. But for many of the men who have gone to Pope St. John’s, it has been precisely because they knew there was this seminary that was especially established by Cardinal Cushing for men in their situation. So, they truly make an extraordinary contribution and have provided the Church with many men who would not be priests today if it was not for Pope St. John XXIII Seminary.

Thursday morning, I was visited at the cathedral by Father Adriano Albino de Castro, who had served in the archdiocesan parishes for several years and recently returned to his home country of Brazil. He was in town for a wedding and came by to see me. 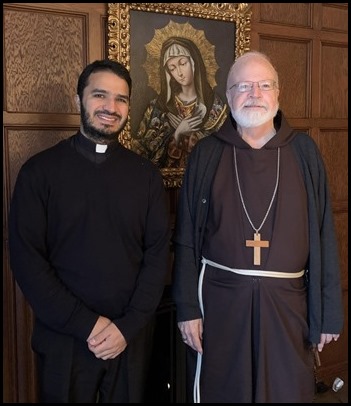 It was an opportunity for me to thank him for his service in the archdiocese. We are so grateful to the Bishop of Brasília who allowed him to come to serve here, where we have so many Brazilian Catholics and so few priests who are able to minister to them. Now, he is going back, and he will be working in the Archdiocese of São Salvador da Bahia. We wish him Godspeed and blessings in his new ministry. 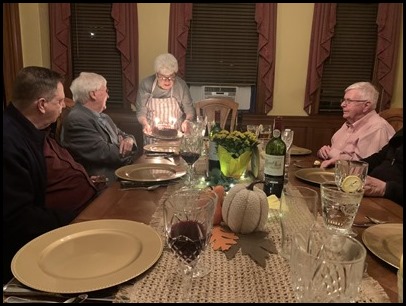 We wish him a happy birthday!

Thursday afternoon, we had a virtual meeting of the Massachusetts Catholic Conference. Of course, one of the issues we discussed was the petition initiative to create a law that would require doctors to try to save the life of children born alive as a result of an attempted abortion. The end result of the petition initiative will depend largely on the Supreme Judicial Court, but they will not even consider the case unless the requisite number of signatures is gathered. People should be on the lookout for the opportunity to add their signatures to that effort.

We also discussed the call that we are making to all our Catholic people to let their voices be heard and say no to physician-assisted suicide. 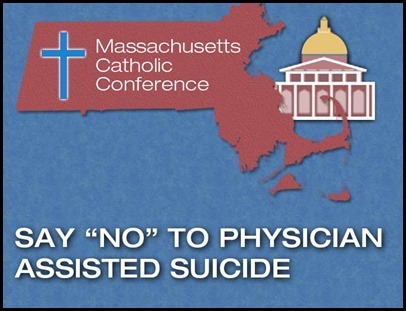 The Massachusetts Legislature is considering passing into law two deeply troubling bills this session that would legalize physician-assisted suicide. They are being titled “An Act Relative to End-of-Life Options.” But the bishops of Massachusetts stand united in our strong opposition to this measure, which is an affront to life and sets a dangerous precedent for determining end-of-life issues. Physicians are trained to care for the ill, not to hasten death. Yet, these bills would allow physicians to prescribe deadly drugs to an individual diagnosed as having less than six months to live. We are very concerned that, at a time in our history when suicide is almost becoming a pandemic itself, that the government would send this kind of signal that suicide is a solution to people’s problems.

So, we are asking people to visit the website of the Massachusetts Catholic Conference and follow the links to find the information on how to contact their individual state representative and senator and let them know of their strong disagreement with this legislation.

We are still confronted with a large number of people who are opposed to receiving the coronavirus vaccine. I would like to invite everyone to watch this panel discussion, which brought together some outstanding Catholic pro-life physicians and scientists to speak about the vaccine.