On Friday, I was visited by Archbishop Francisco Osoria from the Dominican Republic. 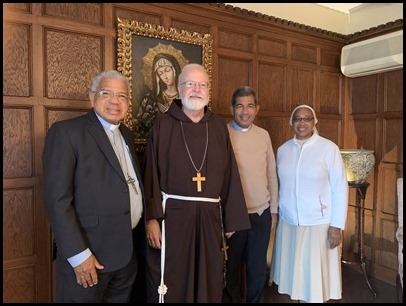 He was accompanied by his brother, Jose Miguel, who is a deacon, and Sister Josefina Rosaria, who works here in the archdiocese. She is a member of of the Congregación Hermanas Misioneras Del Corazon De Jesus, a diocesan community founded by Cardinal Beras, who was the Archbishop of Santo Domingo many years ago and whom I knew very well.

I was also visited by Archbishop Paul Russell, who some may not recognize with his beard. 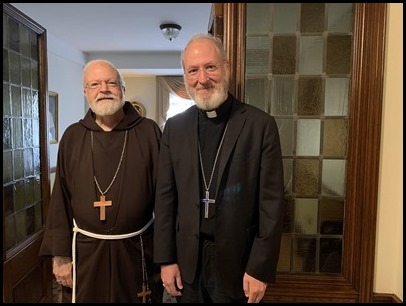 He is just finishing up his tenure as Apostolic Nuncio to Turkey and is awaiting his next assignment. He had not seen the refurbished cathedral and was so happy to see how beautiful it has turned out.

Saturday, we had a Mass during which we celebrated the Rite of Candidacy for our permanent deacon candidates. The Mass actually included two classes since we did not have a Mass of Candidacy last year because of the pandemic. 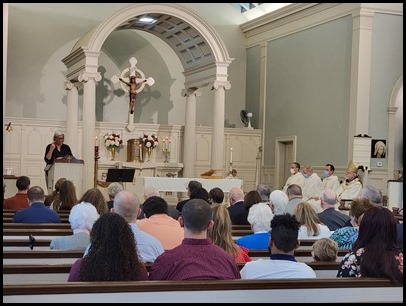 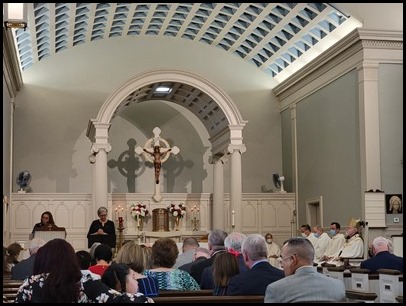 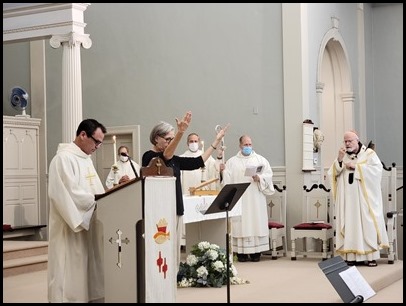 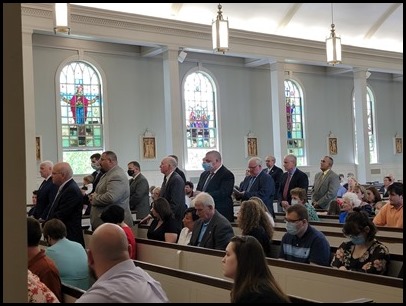 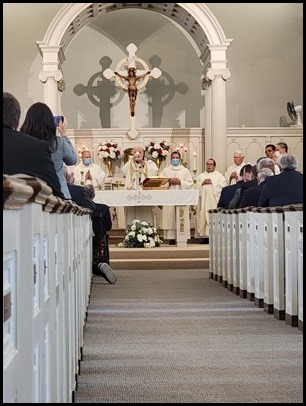 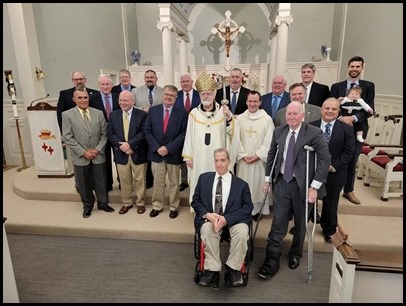 Sunday morning, I went to St. Mary Star of the Sea Parish in Beverly for a Mass to mark the parish’s 150th anniversary. With us for the Mass was, of course, the pastor, Father David Michael, and parochial vicars Father Paul Wargovich and Father Guy Sciacca. The former pastor, Father David Barnes, was also among the concelebrants. We were assisted at the Mass by the parish’s permanent deacon, Deacon Michael Joens, and one of our transitional deacons, Deacon Patrick O’Connor. 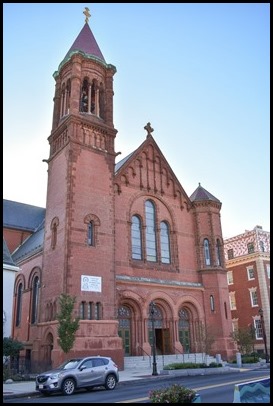 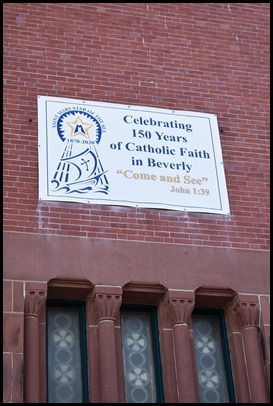 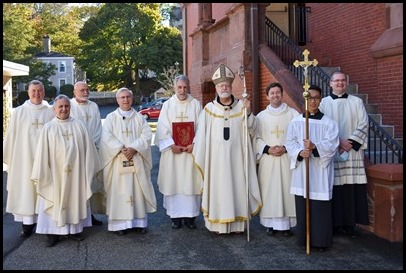 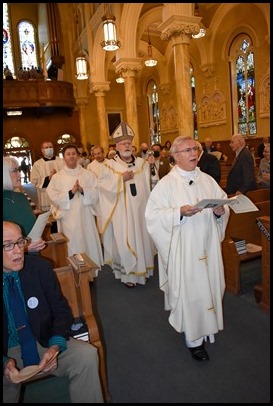 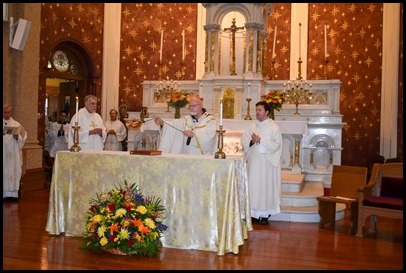 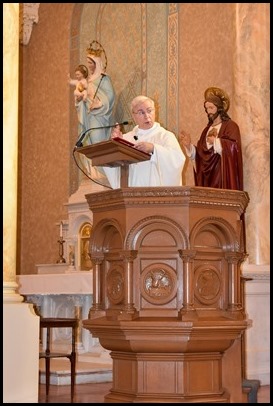 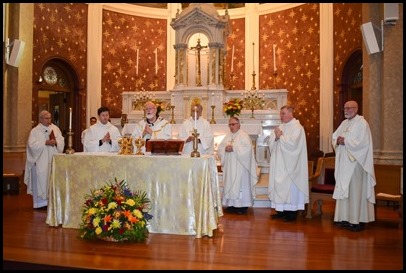 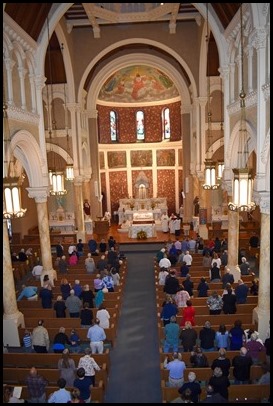 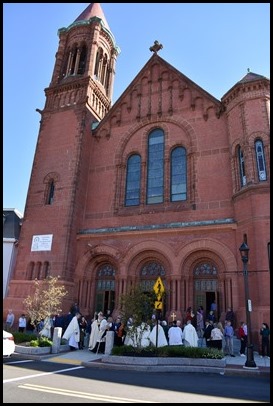 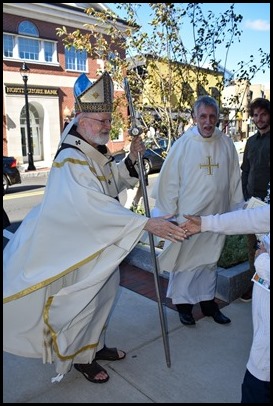 We were happy to gather the people on this very important day. It’s amazing how many parish centennial and sesquicentennial celebrations we have celebrated in the last few months. This serves to remind us of the history of the archdiocese and the immense growth that was taking place in those years when so many immigrants from Catholic countries were immigrating to the United States.

That afternoon, I went to St. Mary of the Annunciation in Danvers for the wake for Deacon Brian Shea, where I was able to express my condolences to his wife, Maureen, and his four adult children. 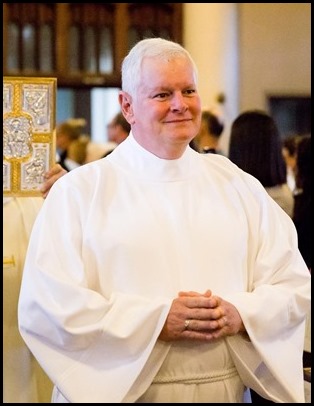 Brian was a pharmacist and was ordained a deacon in 2017. He ministered at St. Mary’s and was a member of the Order of the Holy Sepulchre, but, sadly, he developed a very aggressive malignancy and passed away on October 10. He will be sorely missed by his family, his classmates, and so many people from the diaconal community, as well as by his fellow parishioners.

That day, I also visited the Harvard Catholic Center community to celebrate a Spanish Mass at St. Paul’s Church. Harvard University is training leaders from all over the world and, of course, many of them come from Spanish-speaking countries. So, we are pleased Father Patrick Fiorillo and the campus ministry there have taken the initiative to begin an outreach to Hispanic students at Harvard. It was very enthusiastically received. I was very happy to be a part of it and to be able to speak with some of the students afterward. 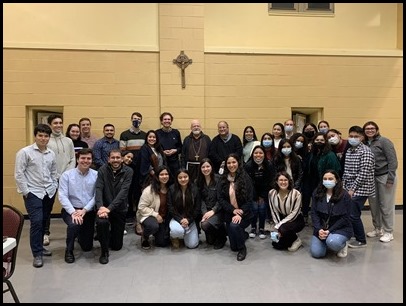 One of the servers at the Mass was Steve Hill, who is a FOCUS missionary. I was delighted to hear that he is relative of one of our Capuchin saints, St. Conrad of Parzham, who happens to be from my province. I have to say that at a Spanish Mass, I didn’t expect to meet a German-American who is actually a relative of one of our saints and has been to Allotting, where St. Conrad is buried!

Tuesday, I was happy to join our virtual all-staff meeting of employees of the Pastoral Center. Father Bill Joy does such a wonderful job of moderating these gatherings. Of course, during the meeting, there was a lot of information sharing by Chancellor John Straub and other staff members. It was a joy to be a part of it and be able to speak to the staff about my recent experiences in Haiti and Cuba.

Tuesday, I went to Quincy for a lunch meeting sponsored by the Cashman Family Foundation to encourage local construction companies to support reconstruction work in Haiti.  I was accompanied by Father Bill Joy, who has been very involved in Haiti through his work with Catholic Relief Services, and our Secretary for Social Services, Father Bryan Hehir. 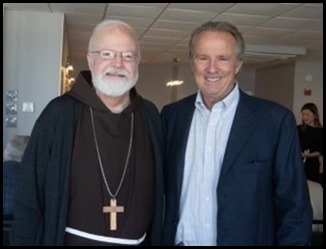 During the meeting, we heard from several speakers, and we also had a video presentation by Cardinal Langlois of Les Cayes.

Jay Cashman and David Murphy, Principal Engineer for Tighe and Bond Company, have both led previous bridge and building projects in Haiti and are very involved in organizing current projects in response to the recent earthquake. They have sent teams to examine the buildings and determine which ones are safe enough to be used, can be repaired or need to be torn down. Their practice has been to hire local people to work clearing the rubble and helping to dismantle these buildings, which is a wonderful way of bringing much-needed jobs to the people and infusing money into the local economy. 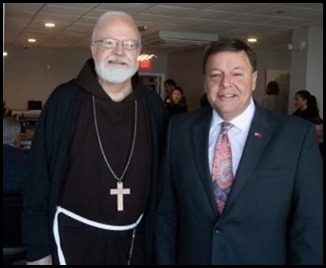 Wednesday, I participated in a virtual meeting of the Pontifical Commission for the Protection of Minors with the second region of the Polish bishops’ conference that is making its ad limina visit to Rome. During their ad limina visits, it’s typical that bishops meet with the various dicasteries, and for the last couple of years, that has included our commission. 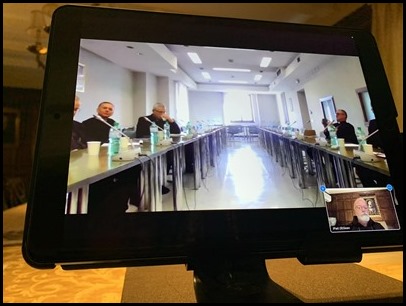 I was able to participate virtually with my staff, including Father Andrew Small. It was an opportunity to speak to the bishops about safeguarding and also thank them for their hospitality in helping to host our conference in Poland last month.

It’s always a good opportunity to be with our brother bishops. Of course, among the items we discussed was our upcoming fall meeting of the U.S. Conference of Catholic Bishops, which after two years, will finally be in person once again.

That afternoon, I went to Pope St. John XXIII National Seminary for a board meeting, which also happened to coincide with their Alumni Day and Mass. About 30 priest graduates, including Auxiliary Bishop of Washington Roy Campbell, came to be a part of their gathering. It’s just another indication of the affection and gratitude that the alumni feel for Pope John XXIII Seminary. It’s also a great opportunity for them to reconnect with friends and classmates. 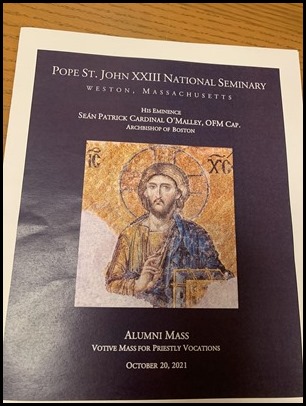 Thursday, at our Presbyteral Council meeting, I reflected on the importance of Pope St. John XXIII Seminary. As I often do, I noted that many men who are priests today would not have been ordained were it not for Pope St. John XXIII Seminary. The seminary truly provides an extraordinary service to the Church, creating a special place for older men who are pursuing a second-career vocation. The seminary is a gift for the Church in Boston and throughout the entire country.