In light of the growing number of federal executions in recent months, I felt compelled to issue the following statement this week, raising a voice in defense of the Gospel of Life.

As 2020 comes to a close, the United States has implemented the most aggressive federal execution policy in 124 years.  Ten inmates have been executed in 2020, the most since the administration of President Grover Cleveland, with additional federal executions scheduled over the next month.  This is an acceleration of a punishment that had been paused the previous sixteen years.  At the same time, states have executed fewer numbers of inmates than at any time since 1983.

There is no doubt that crimes of immense depravity and evil have been committed and require serious sentences. No words or expressions of sorrow can alleviate the pain and anger that families and friends of victims experience. Too many lives have been lost to senseless acts of violence.

This level of suffering is not lost on the Church.  However, capital punishment is not a deterrent to serious crimes such as homicides, a majority of Americans would choose non-lethal forms of punishment and people of color make up a majority of inmates executed.  Furthermore, hundreds of people on death row have been exonerated since 1973.  Our criminal justice system is deeply flawed and requires reform.  Recognizing this, however, the Church embraces a culture of life from conception to natural death.  We have long considered that capital punishment is incompatible with the pro-life ministry of the Church.

As I stated previously, legitimizing the death penalty fails to recognize that our nation has the means and capacity to provide safety and security for all without eroding the respect for life that is essential for a morally sound society. We must share the pain, anguish, and suffering of those whose family, loved ones, and friends have been the victims of murder and other violent crimes. Rejection of the death penalty calls us to implement alternatives that acknowledge the victims’ suffering and assure our citizens of justice and their safety.

Responding to a question about the death penalty in 1957, Rev. Dr. Martin Luther King, Jr. stated, “Capital punishment is against the better judgment of modern criminology, and, above all, against the highest expression of love in the nature of God.”

Pope Francis formalized Church opposition to capital punishment when he decreed the death penalty “inadmissible.”  The revision to Church teaching states that “there is an increasing awareness that the dignity of the person is not lost even after the commission of very serious crimes … more effective systems of detention have been developed, which ensure the due protection of citizens but, at the same time, do not definitively deprive the guilty of the possibility of redemption.”

In the past twelve months, our nation has been grappling with a global pandemic that has seen more than 300,000 people die of COVID, a financial system under immense stress with job loss at historic numbers, food insecurity surging, and foreclosures and evictions soaring.  Our society is reaching a breaking point on so many levels.

We can and must embrace a policy of justice through law, respect for the dignity of every human life and as articulated by the USCCB in 1980 and still relevant today that our challenge is “to find ways of dealing with criminals that manifest intelligence and compassion rather than power and vengeance. We should feel such confidence in our civic order that we use no more force against those who violate it than is actually required.”

Saturday, Father Michael Zimmerman stopped by the cathedral with a group of young people from St. Mary Parish in Dedham who participate in a ministry to the homeless. They had been distributing food in the area, and I was very happy to greet them. 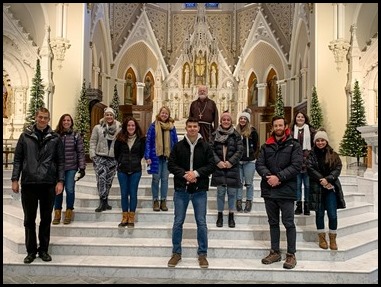 We were very distressed to hear about the fire at the rectory of St. John the Evangelist Parish in Townsend early Monday morning. However, we are very grateful that the pastor, Father Jeremy St. Martin, was able to escape with only minor injuries. Father Jeremy and the whole parish are certainly in our prayers. 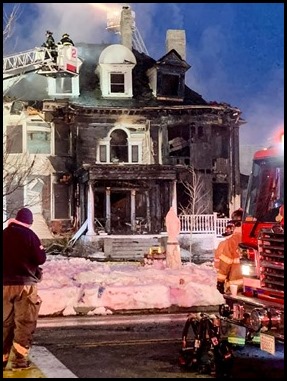 This past week, we said goodbye to two fine priests of the Archdiocese of Boston — Father Maurice O’Connor and Father Leo Cormier.

Father O’Connor ministered in several archdiocesan parishes and was most recently pastor of Our Lady of the Rosary in Stoughton. In his retirement, he lived in Taunton and still helped out with Masses there. His funeral was Tuesday in Norton. 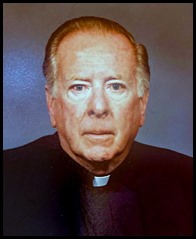 On Monday, I went to St. Francis Parish in Dracut to celebrate a wake service for Father Cormier. Many members of his family were there with us, along with the pastor of St. Francis, Father Sean Maher. 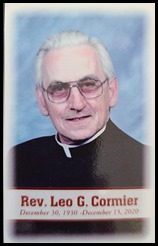 Father Cormier had a very long life and ministry, and he was very close to his family, especially his sisters. He had done some of his studies in Québec, so at the conclusion of the service, I sang a verse of the “J’irai la voir un jour,” a French song that is customarily sung at wake and funeral services.

While I was at St. Francis, Father Sean showed me an altar they have that fits into the side door of the church. That way, he can celebrate the daily Mass from just inside the door while the people remain seated or in their cars in the parking lot. Then, they come into the vestibule to receive communion. I thought it was quite creative. 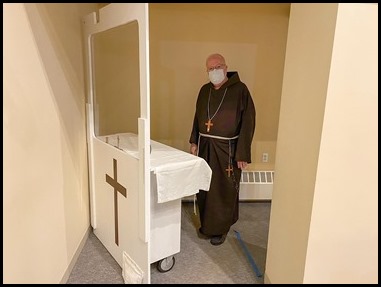 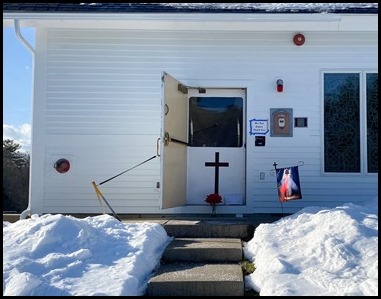 Tuesday, our chief healthcare ethicist, MC Sullivan, and I held a press conference at the Cathedral of the Holy Cross to discuss preparations for Christmas Masses around the archdiocese. 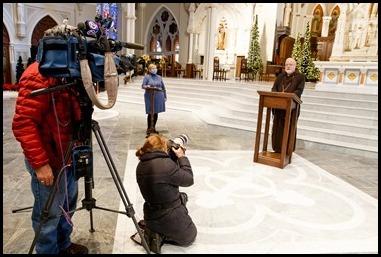 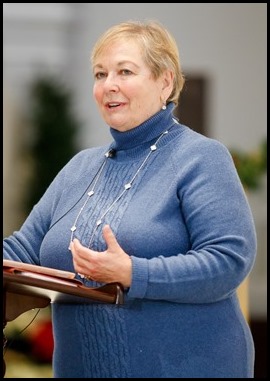 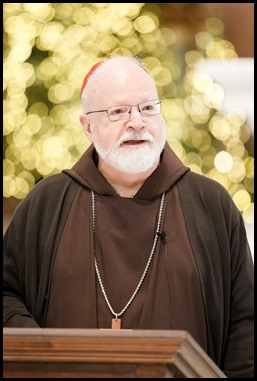 Also on Christmas Eve, I made my annual visit to Pine Street Inn. Ordinarily, I would be there with dozens of volunteers — many from our Catholic parishes — to serve the Christmas meal to the men and women at Pine Street. 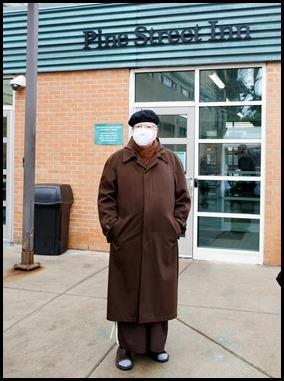 For obvious reasons, my visit had to be a bit different this year. Instead of serving a meal, we remained in a tent outside, and residents could come and pick up Christmas presents of gloves, hats and scarves. I was very happy to be joined by Pine Street president and executive director Lyndia Downie and board Member Father John Unni. 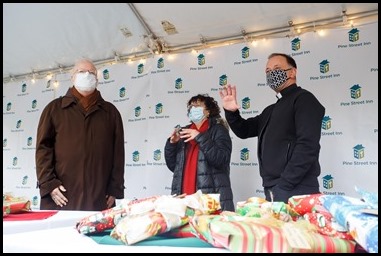 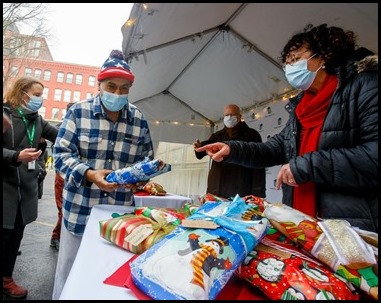 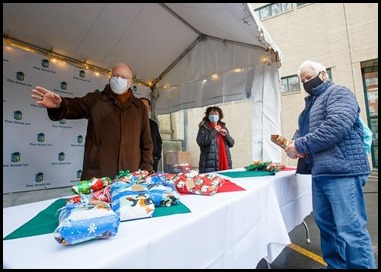 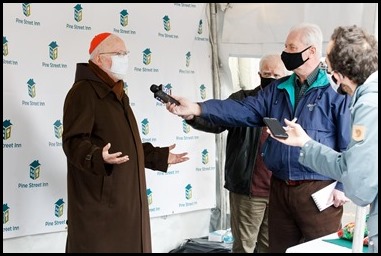 We are very grateful to the members of the media who come each year to help us get the word out about the important mission of Pine Street Inn. 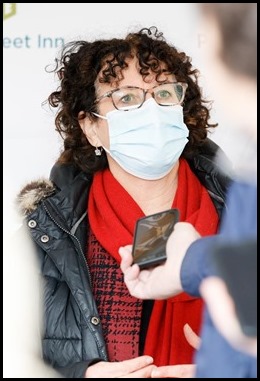 We are all acutely aware of the many ways the pandemic has drastically affected people, particularly those experiencing job loss, food shortages and eviction from their homes. So this year, our visit to Pine Street was a poignant reminder that we should all do whatever we can to help the many organizations such as Pine Street, St. Francis House and Catholic Charities that are providing shelter and aid to the growing number of people who find themselves in these dire situations. Christmastime is, of course, the time when the Holy Family experienced homelessness in Bethlehem and became refugees in Egypt. So, it is important to realize that our call to discipleship is a call to serve Christ in the homeless, in the stranger and in those who are hungry and in need.

Finally, as we prepare to celebrate the Nativity of Our Lord, I want to leave you with this telling of the Christmas story: