On Saturday, I was very happy to be invited to baptize William and Isabelle Maglathlin, the children of a young local couple, Caitlin and Peter Maglathlin. The parents, grandparents and the maternal great-grandmother were with us for the celebration along, of course, with the godparents. In fact, one of the godparents was named Sean O’Malley, and I immediately declared that he was an imposter! 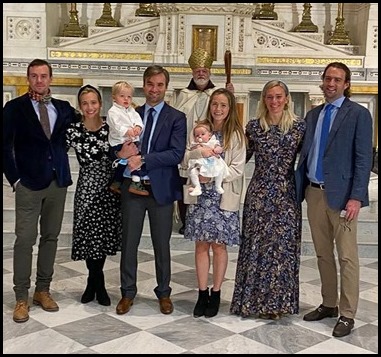 It’s always a great joy to be able to celebrate a baptism. Obviously, because of the pandemic, this family has been waiting a long time to have their children baptized, so I was very pleased I was able to do it.

Saturday was also the Feast of Our Lady of Guadalupe, and we had a modest celebration with the Cathedral Parish organized by Sister Sara. It was lovely, but it was certainly a far cry from the celebration we would normally have — with Aztec dancers, mariachis and huge crowds. It was just one more reminder of the reality that we are living during this pandemic, and we all look forward to next year’s celebration. 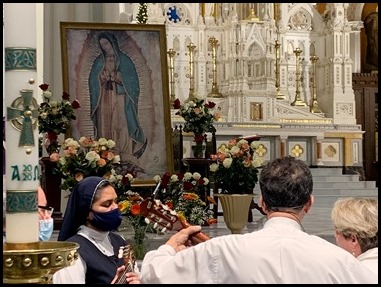 I always remind people that December 8 and December 12 are two Advent feasts of Mary. On the Feast of the Immaculate Conception, God is preparing the Mother of God for her role in salvation history, and Our Lady of Guadalupe appears wearing the maternity gown of the Aztec culture because she is the woman of Advent waiting for the birth of the Christ Child.

Monday and Tuesday, I participated in board meetings of the Catholic University of America. The university is, like all colleges, working very hard to adjust to the demands of the pandemic, and I think they are doing a fine job. They have a very active board, and we are very grateful for the wonderful spirit that President Garvey, the faculty and staff bring to their work with our young people at CUA. 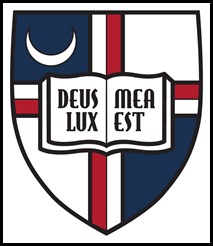 Tuesday, I traveled to Springfield for the ordination of their new bishop, Bishop William Byrne. I was very honored to be invited to serve as principal celebrant and consecrator. As the Metropolitan Archbishop of this province, I also installed him at the Mass. 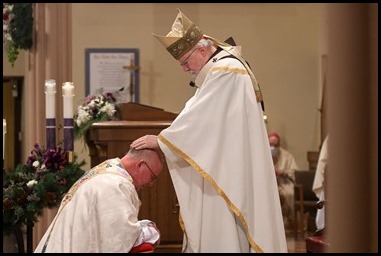 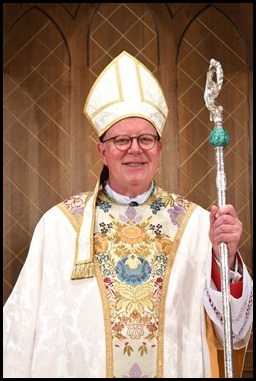 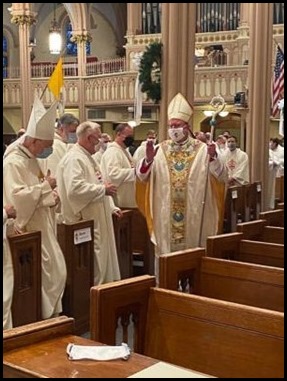 Current capacity restrictions didn’t allow for the huge crowd that would normally have been present at Springfield’s Cathedral of St. Michael the Archangel. But we were happy that we could be joined by Bishop Byrne’s predecessor, Archbishop Mitchell Rozanski of St. Louis, as well as Cardinal Timothy Dolan, Cardinal Donald Wuerl and Cardinal Wilton Gregory, who is the Archbishop of Washington where Bishop Byrne was pastor before being named bishop. Also with us was the Papal Nuncio, Archbishop Christophe Pierre, who read the apostolic letter from Pope Francis naming Bishop Byrne the Bishop of Springfield. 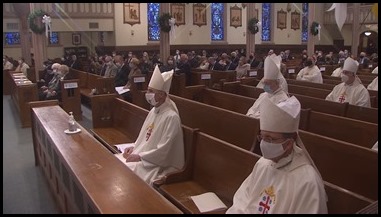 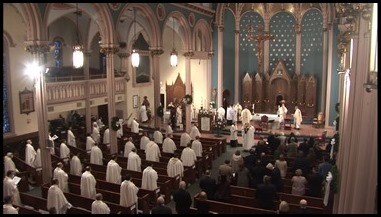 Bishop Byrne is the youngest of eight children, so there were many Byrne family members with us, as well, including his mother, who is in her 90s, and his sister, who is a religious. 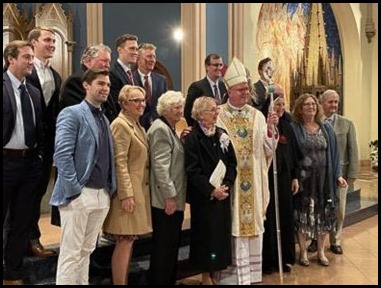 Bishop Byrne is blessed with many talents and was very successful in his pastoral ministries in Washington, both in the parishes and campus ministry, as well as in promoting vocations. We know he will bring these talents to his ministry as Bishop of Springfield. We pray that the Lord will bless his ministry and the people of the Diocese of Springfield who received him with great affection and enthusiasm. 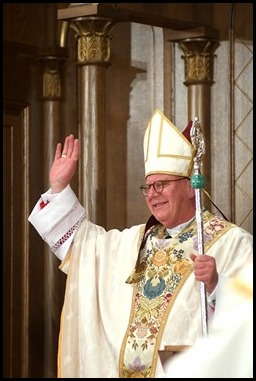 After the ordination, Archbishop Pierre accompanied me back to Boston, which gave me the opportunity to show him the renovations to the Cathedral of the Holy Cross. He was very impressed to see the beauty of our cathedral. 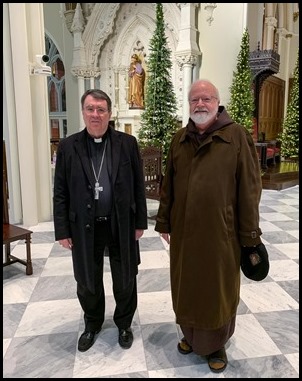 Wednesday, I was very honored to be asked to give an invocation and reflection for the Boston City Council’s final meeting of the year. 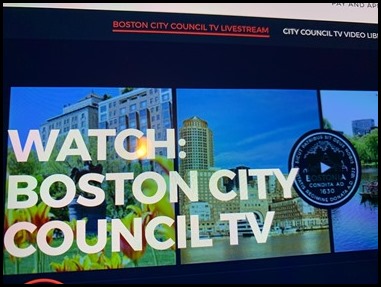 In my remarks, I spoke about the council’s mission of working for the common good, serving the poor and reaching out to those in need. On that theme, I also spoke of Christmas, noting that the Holy Family was homeless in Bethlehem and refugees during their flight into Egypt.

Thursday, I was very happy to have the opportunity to watch the new HBO documentary “The Art of Political Murder,” which tells the story of the assassination of Bishop Juan Gerardi of Guatemala. I had read about it in the newspaper and was looking forward to seeing it. 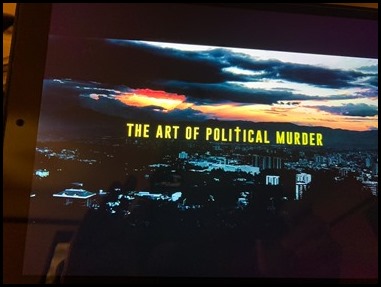 Bishop Gerardi was a friend of mine. I met him when I was visitator for the seminaries in Guatemala. He had been bishop in two of the dioceses that are made up mainly of indigenous people. One of them was Verapaz, where I visited the seminary for the indigenous seminarians. I have many fond memories of Bishop Gerardi. He was very witty, urbane and just a wonderful human being. His death was most tragic. 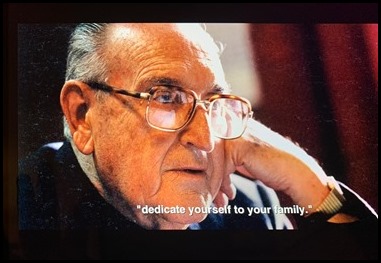 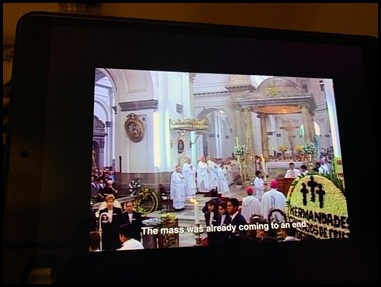 Bishop Gerardi was long concerned with the cause of human rights and led the Recovery of Historical Memory Project, an initiative of the Catholic Church to document the atrocities of the Guatemalan Civil War. They found that the vast majority of these atrocities — the murder of many thousands of civilians and something like 600 massacres of indigenous people — were committed almost exclusively by government troops. Bishop Gerardi publicly reported these findings on April 24, 1998, and two days later, he was brutally murdered. 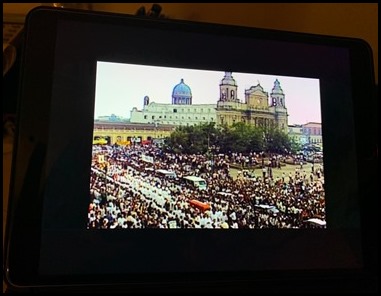 It is a very, very compelling story, and I thought the documentary was very well done. It certainly shows the courage of the witnesses, prosecutors and judges who were eventually able to convict his murderers. It also highlights the great suffering that the Guatemalan people have endured.

Thursday, we had one of our regular meetings of the Presbyteral Council of the archdiocese.

During our meeting, we heard a report by our Delegate for Religious, Sister Germana Santos, on religious life in the archdiocese. Among the interesting things she noted was that the Catholics of the Archdiocese of Boston always have the largest collection for retired religious sisters of any diocese in the country. This is clearly a reflection of the great love and high regard that Boston Catholics have for our religious sisters. 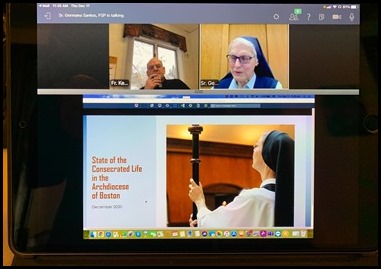 I expressed to the priests that it is a cause of great distress to me that so many of our young Catholics today don’t know any religious sisters. We are blessed to have had three professions of religious sisters in the last few months — the latest one being Sister Karla, a young Brazilian woman who had worked with us at the Pastoral Center. But too many of our young people — and we have such a young population here in Boston — have never met a religious sister. This is such an important vocation in the Church, and I urged the priests to look for ways to aquaint our young people with the beauty of religious life. Obviously, the older generations have experienced the work of sisters and have such a great love for them, as is reflected by the generous collection that is taken up every year.

Also, at the Presbyteral Council, we announced that the new Executive Director of our Clergy Trust will be Michael Scannell. He will begin his new position in January.

We are so grateful to Joe D’Arrigo, who has done an extraordinary job and has always exhibited his great love for and devotion to the priests of the Archdiocese of Boston. Thanks to Joe’s hard work and great talent, our Clergy Trust is doing very well and we are very happy that Joe will continue on to assist with the transition as Michael begins his leadership of the Clergy Trust.

On Thursday, we held our annual Advent Gathering for the staff of the Pastoral Center. Unfortunately, this year we were unable to gather for our Mass and reception, as we usually would. However, our staff very creatively put together a virtual gathering, which was very well done. Bishop Peter Uglietto even complimented the staff on arranging for the snow, so we would have the proper atmosphere for our Advent party! 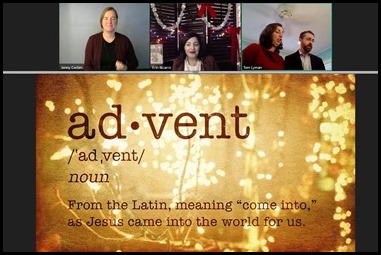 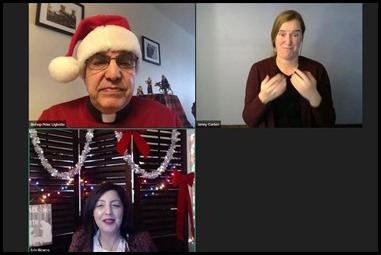 I was very happy to be able to greet everyone and give a short reflection on Advent. 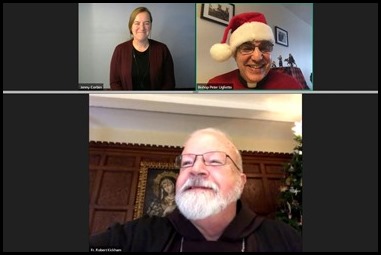 After that, we had a slideshow featuring photos of staff members’ Nativity scenes, which played while Tom Lyman and his wife, Lauren, sang beautiful Christmas hymns. 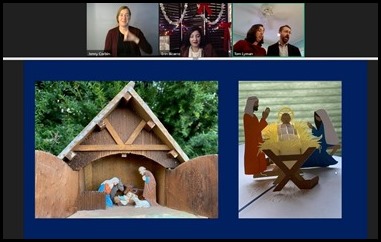 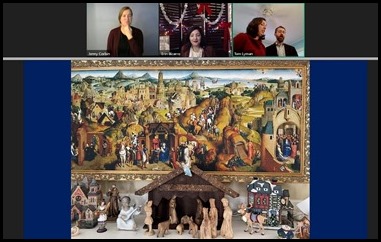 And, of course, no Advent Gathering would be complete without Bishop Peter leading us in our annual gift raffle. This year, there were no slips of paper in a basket, but instead, they had a digital “Wheel of Fortune” with everyone’s name on it, which I thought was very creative!

Finally, I want to share this picture with you that I took outside the cathedral rectory yesterday. 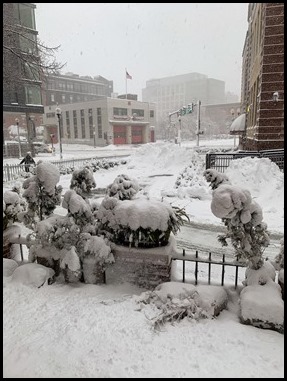 Seeing all the snow made me feel badly for the young people today because when I was a child, we loved snow days, but I fear that, in the future, snow days are going to become “remote learning days!”