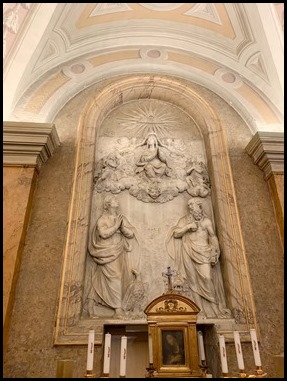 Santa Maria Della Vittoria is very famous for the statue, The Ecstasy of St. Teresa by Bernini. 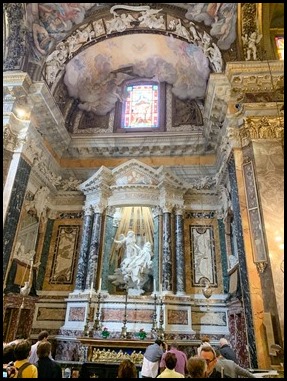 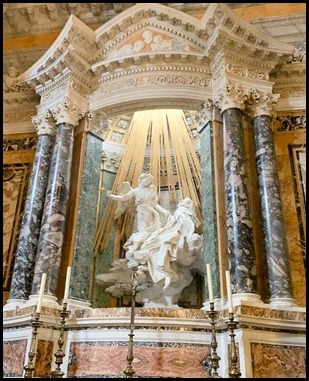 But it is also well known as the place where St. Therese of Lisieux visited as a young girl when she was on pilgrimage to Rome with her father. They came to pray at the statue of her patron saint, St. Teresa of Avila. The Carmelite Friars have run this church for many centuries, so her interest in entering the Carmelite Order led her to this church. 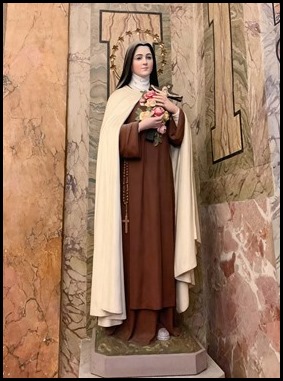 I invited our new deacon, Deacon Dennis Nakkeeran, who was just ordained on Oct. 3, to serve as deacon at the Mass and to preach. He delivered his homily in flawless Italian, and I was just so proud of him. 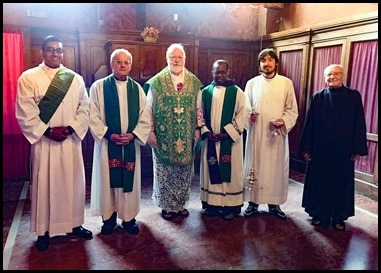 With Deacon Dennis, the pastor Father Rocco, and some of the Carmelite Friars

Having our new deacon preach at my titular church was a great joy.

Rome is such a crossroads. I never come here without meeting people I know from all over the world, and this week there have been many such encounters.

At Santa Maria Della Vittoria, I was so happy to run into Deacon Reynold Modeste and his wife, Daphne, from St. Croix, who were in Rome on pilgrimage. I celebrated their wedding 34 years ago and in the last few years Reynold has become a deacon in the Virgin Islands. 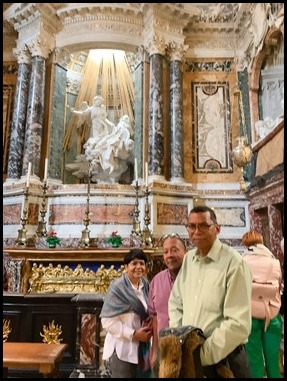 I also ran into another couple whom I married, Joel and Mimi Conlon. I baptized Mimi, celebrated Joel and Mimi’s wedding and have baptized their children. 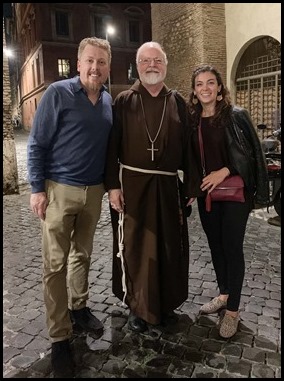 One of the joys of being priest is to be able to celebrate these sacraments with families, and it is such a great satisfaction to see, years later, how people are living those sacraments — their marriage, their baptism.

There are also many people from Boston who are here, some of whom came for the canonization of Cardinal Newman last week, and it has been a joy to reconnect with them.

On Sunday evening, there was a conference on integral ecology at the Paul VI Audience Hall in the Vatican. 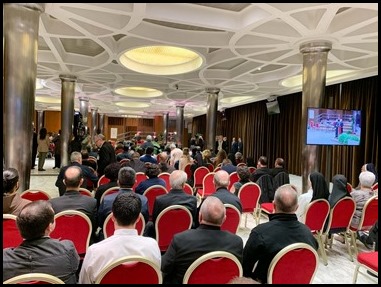 There were many interesting talks, and it ended with a concert by a group of Bolivian folk singers. 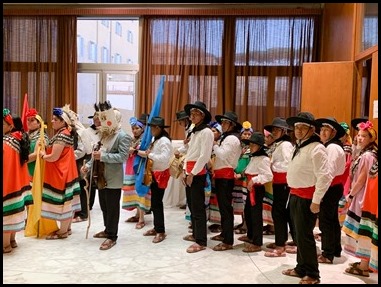 On Wednesday, I attended a celebration at the headquarters of the Order of the Holy Sepulchre in Rome. 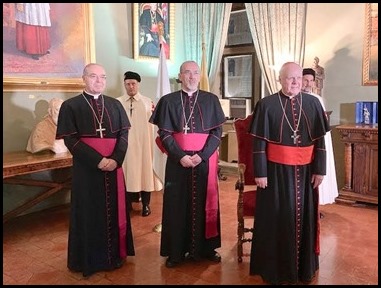 I was happy to see Cardinal Jim Harvey there and also Msgr. Francis Kelley, who had been the Master of Ceremonies for the Order before becoming a Canon of St. Peter’s.

Their headquarters is in the Palazzo della Rovere, just off St. Peter’s Square and has a very interesting history. The Order’s page on the Vatican website explains it:

Today, this “palace” is often incorrectly called the “Palazzo dei Penitenzieri”, after the name of the previous owners, the Penitentiary Fathers of St. Peter’s. In the 15th century, however, it was the residence of Domenico della Rovere, a Cardinal from the Piedmont, who belonged to the inner circle surrounding Pope Sixtus IV della Rovere. Domenico della Rovere had a brilliant career in Rome, making his name in a number of important and highly remunerated ecclesiastical posts. The palazzo was built in the late 15th century, between 1480 and 1490; the Florentine architect, Baccio Pontelli, modelled it closely on  the architectural style of Palazzo Venezia, the most important building in 15th century Rome. In fact, in the 15th century, the Palazzo della Rovere was so greatly praised and admired that Emperor Charles VIII chose to stay here when he visited Rome in 1495.

The five halls of the piano nobile, are now the official reception rooms of the Equestrian Order of the Holy Sepulchre of Jerusalem and one of them is home to an extremely important ceiling by the artist Pinturicchio and his atelier. The Hall of the Grand Master is lavishly decorated with trompe l’œil architectural features depicting a terrace looking out onto a landscape. The Hall of the Seasons retains fragments of a very rare kind of portrayal of the months of the year, each month represented by the myth that gave rise to its zodiacal sign; the scenes which have been best preserved relate to June, with a peasant making hay and the myth of Hercules and the Hydra – the origin of the sign of Cancer; October, with the bird-catcher of Byzantine legend and the myth of Orion – the origin of the sign, Scorpio; and March, with soldiers ready to set off to war. 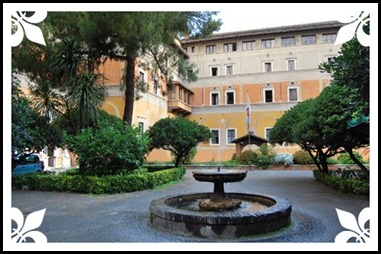 The next hall has fine lunettes enclosing images of the prophets delivering their words of wisdom and apostles accompanied by verses from the Creed; the frieze around the exquisite gold and blue ceiling features portraits of Roman Emperors.

The most sumptuous and best preserved ceiling is in the Hall of the Demigods. This astonishing composition of 63 panels painted on board and enclosed in wooden caissons is full of creatures from mediaeval bestiaries flanked by allegorical and symbolic images drawn from classical tombs – very important evidence indeed of a culture at the crossroads between the Middle Ages and the Renaissance. Fantastic animals and monsters, mythological gods and goddesses, chimaeras (creatures half-human, half-beast) such as sirens, tritons, centaurs, satyrs and sphinxes stand out against the gilded background of the caissons; some are playing musical instruments or fighting with rudimentary weapons in a huge variety of poses.
In the left wing of the palazzo – currently occupied by the Hotel Columbus – the old refectory overlooking the hanging garden still has the ancient 15th century décor of themes based on nature, as well as allegorical figures clearly influenced by the style of Michelangelo. In the same wing of the building, some of the rooms on the second floor have frescoes painted in 1552 by the Florentine artist Francesco Salviati. The work was commissioned by Cardinal Giovanni Salviati, who owned the building for a long time and made it his residence. One of these frescoes is at the centre of the ceiling of the “Apollo Room” where, in a trompe l’œil portrayal, Apollo drives his chariot pulled by the horses of the Sun, surrounded by the emblems of the Medici family.

And, of course, throughout the week we have continued our meetings of the Synod for the Amazon, which will soon come to a close. 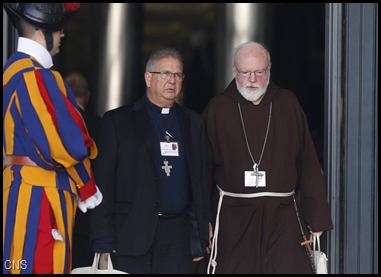 The formal name given to the Synod was: “Amazonia: New Paths for the Church and for an Integral Ecology.” This Amazon region that the Synod concerns is 800,000 square kilometers, with a population of over 33 million inhabitants. It covers nine countries – Bolivia, Peru, Ecuador, Colombia, Venezuela, Brazil, Guyana, Suriname, and French Guiana. It is such an important region because the Amazon forest represents 40% of the world’s tropical forests, and their territory contains one of the richest and most complex biospheres on the planet. It is essential for the distribution of rainfall in remote regions of South America and contributes to the large movements of air around the planet. Yet, the whole area is endangered because of the destruction of the forests and pollution of the water and land due to mining, logging, and other activities. So, it really is a threat to the health of our planet. 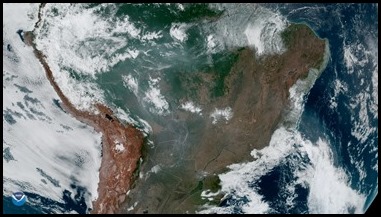 One of the purposes of the synod is to invite people to experience a conversion in their own lives about how we use the resources of nature. I think that, in the United States, being a country that has such wealth and technology, we tend to act as if all the resources of the planet are limitless and we do not focus on the importance of having sustainable energy and resources. The Holy Father is constantly talking about the culture of waste – of wasting resources, of wasting food – and all this is something that we, as believers, need to consider. We need to consider how we are being responsible stewards of the gifts that have been given to us. 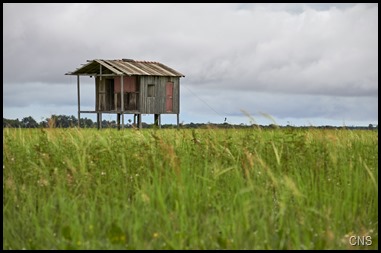 My fear is that, as more and more of the resources of the planet are wasted and our rain forests are destroyed, the solution that many people will embrace is that we should reduce the population of the world, so that we can maintain our high standard of living without making sacrifices or embracing a simpler form of life. So, this ecological question has many ethical dimensions that we, as believers, must reflect upon. I think that the teachings that will come out of this synod and the post-synod exhortation will focus on some of these subjects. 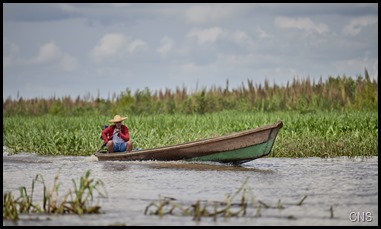 The other reality of that part of the world is the violence that takes place there, not just the violence against nature, but the persecution of local leaders who are trying to defend their land, and the forced migration of indigenous peoples — people being forced out of the forest into the city where they often live in abject poverty.

In Latin America, there have been many who have been murdered for living out their faith and others who have been murdered because of their defense of human rights and of the poor. In my own lifetime, I have personally known three bishops who were murdered in Latin America. I think that people do not appreciate the suffering and the courage of our fellow Catholics in Latin America and that the Holy Father, as he often does, is trying to call people’s attention to the periphery. In this case, the periphery is the Amazon region, with its violence against the natural resources that are the patrimony of all humanity and violence against the people there. As the Holy Father pointed out in Laudato Si’, these ecological questions affect the poor in a very dramatic way.

In American society, we are often protected from many of the effects of all the violence and waste that is taking place in the Amazon. However, we need to see ourselves as stewards and think about what kind of planet we want to pass on to future generations. It is interesting to me to see how young people are so impassioned by this topic. I think it is because they realize that what happens in the future will depend, in great part, on how we respond to the present crisis — whether it is going to be business as usual, or whether we will seriously look for ways to be better stewards of the treasures that God has entrusted to us.