I want to begin this week by sharing with you a statement I issued on Thursday regarding the Holy Father’s motu proprio Vos estis lux mundi:

Following the international summit in Rome this past February, Pope Francis pledged “concrete measures” to respond to the clergy sexual abuse crisis in the Church. Vos estis lux mundi is one means of fulfilling that pledge, establishing specific mandatory protocols and reporting systems for matters concerning such abuse.

This document directly addresses needed improvements to the Church’s response by requiring all dioceses in every country around the globe, within one year’s time, to establish a public, accessible and reliable system for reporting crimes of clergy sexual abuse and any cover up of abuse. It also requires the establishment of new procedural norms for investigating crimes by bishops and supreme moderators of religious institutes, including both allegations of sexual abuse and any cover up by way of actions or omissions intended to conceal information or to interfere with investigations.

These new norms address the sexual abuse of minors and they also expand the definition of the “vulnerable persons” who suffer abuse. But it is also quite significant that Vos estis lux mundi includes adults who suffer sexual offenses through violence or intimidation or the abuse of authority.  People who suffer abuse from those in positions of authority can include, for example, seminarians and religious.

It is notable and of great importance that the new provisions require that information be given to the victim of an alleged offense regarding investigations and, further, that the Holy Father places particular emphasis on lay persons participating in the investigations.

During the past year it has become far more clear that the people of the Church and our wider society rightfully demand substantive action for disclosure, transparency and accountability with regard to any occurrence of sexual abuse, or intimidation, or cover up in the life of the Church and that that all Church personnel, regardless of office, be subject to the same policies, procedures and sanctions. Vos estis lux mundi is an important and substantive response to that demand.  I am grateful to the Holy Father for his recognition of the critical need for these new policies and procedures and his actions to as best possible assure the protection of all the people we serve throughout the world.

We were very sad to learn this week of the death of Jean Vanier after a long battle with cancer. His spirituality and his service to the developmentally disabled made such an impact, not just in our Church, but throughout the world through the L’Arche movement that he began. It was my privilege to have met him on a number of different occasions, and he was someone whom I admired very, very much. 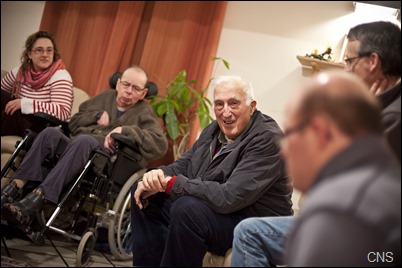 He was from a very prominent Canadian family and his father had been Governor General. As a young man, he embarked on a military career but came to discover his vocation in serving the developmentally disabled and forming communities in which they could live with dignity. One of those who was very much impacted by him was Henri Nouwen, the spiritual writer from Holland, who went also to live with the L’Arche community.

His life and ministry have made such an impact on the world, and his passing is a great loss for the Church. He underscored the preciousness of life in a world where women are encouraged to abort children with Down syndrome and other developmental problems. Yet, he saw these people as his brothers and sisters, made in the image and likeness of God. That testimony is so valuable in today’s world.

The Holy Father was able to speak with him by phone before he died, which I am sure was a great blessing for him. He will be greatly missed, but his legacy goes on, and his work at L’Arche is a great tribute to his humanity and to his Catholic faith.

This week, I also want to note the passing of Kay McAvoy. 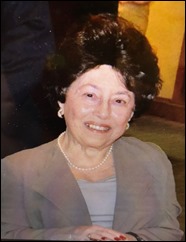 Kay was an extraordinary laywoman and a person of deep Catholic faith. She was so dedicated to the Church and in so many different ways supported Catholic causes, particularly the St. James Society and Maryknoll.

Bishop Hennessey celebrated her funeral on Saturday at St. Camillus Church in Arlington. I understand there was a very large group of family and friends there to bid her farewell, as well as more than a dozen priests who concelebrated the funeral Mass. She will be sorely missed.

The Easter season is such a wonderful time of year when so many sacraments are celebrated, particularly baptisms, confirmations and ordinations. 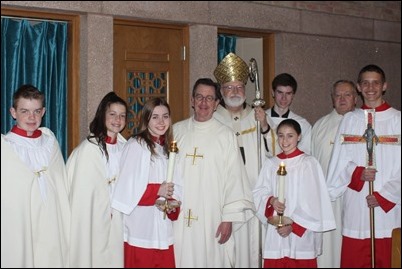 With Father Tom Rafferty and the servers at St. John’s in Canton 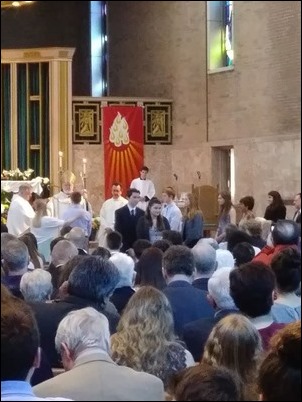 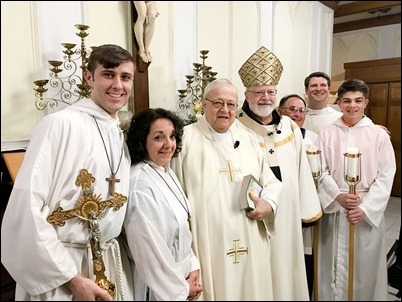 With Father Frank Mawn and the altar servers at Corpus Christi. Also with us is Father Patrick Armano, whose niece was being confirmed. 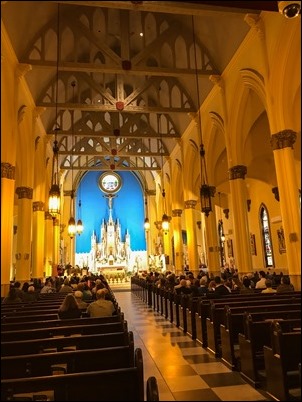 I took this photo of the altar of the “Three Saints,” Sts. Alfio, Filadelfo and Cirino, in Corpus Christi because, of course, the parish is very famous for the Three Saints Festival they hold each year. 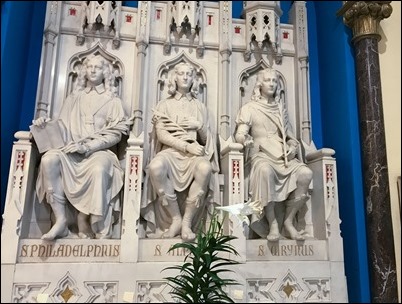 It is so fitting that we celebrate the Easter sacraments in our parishes, and confirmations are such an important event, not just in the life of the individual young people who are being confirmed, but also in the life of the parish and the Church. It is a time to call people to a deeper commitment to their faith and a sense of mission and vocation, and I am always very happy for the opportunity to address these themes with the young people. I often talk to them about vocations to the priesthood and consecrated life, but most especially to marriage, to which most of them are being called. I like to tell them how the gifts of the Holy Spirit can help to prepare them for their vocation in life. So, it was a great joy to be able to celebrate the confirmations at these two parishes.

Sunday, I went to St. Anne Parish in Readville to celebrate a Mass for their centennial anniversary. Father Ron Coyne is the pastor there, and we were so happy to have a number of the Sisters of Charity of Nazareth also with us. The sisters had run the school there for over 90 years. 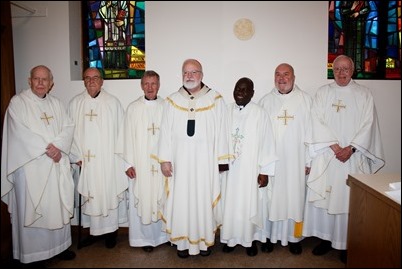 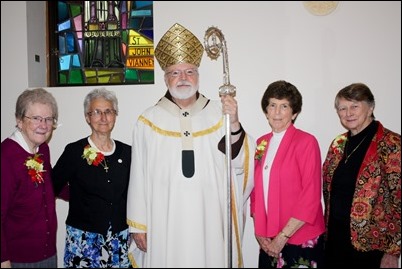 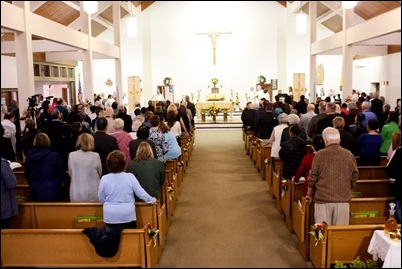 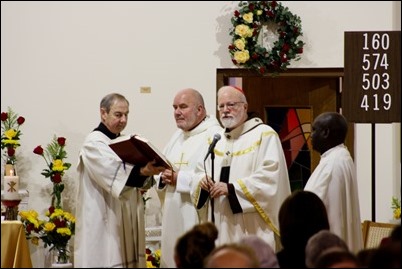 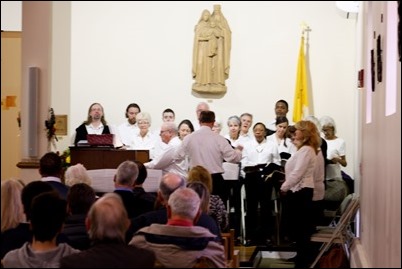 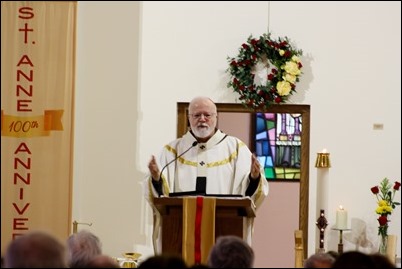 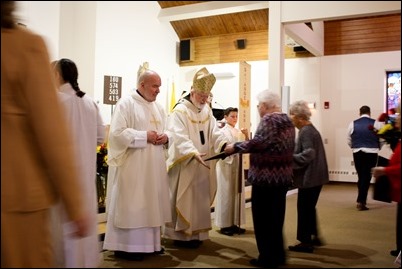 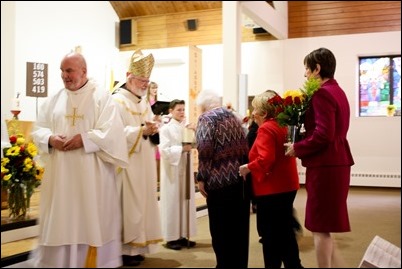 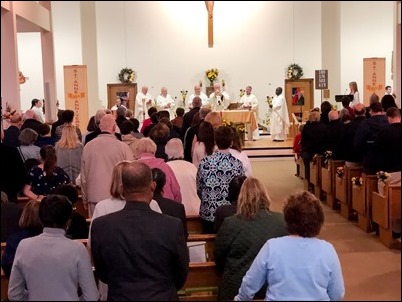 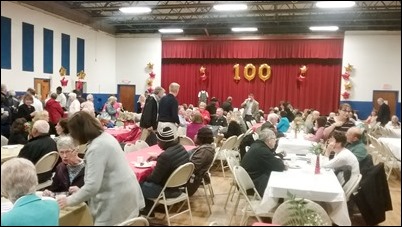 The parish is very vibrant, with many different groups and activities, and I was very happy to be able to celebrate this important milestone with them.

Monday, I celebrated the funeral for Father Ned Carroll at St. Barbara in Woburn. 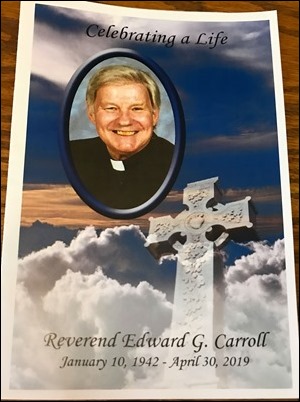 Father Carroll would have celebrated his 52nd anniversary of ordination next month. In his many years in ministry, he served in parishes in Lowell, Plymouth, Quincy, Needham and Everett, with his last assignment before retirement being at St. Barbara’s. In the last several years he had been living at Regina Cleri.

Many of his friends, family and classmates were there with us for the celebration. Father Joe Fagan, who was one of his classmates, delivered the homily. It was a wonderful send-off for a wonderful priest.