We were very pleased this week to learn that the Holy Father has appointed Archbishop Wilton Gregory as the Archbishop of Washington, D.C. While the news was welcome, it was not a great surprise, as many of us were hoping for him to be named to that post. 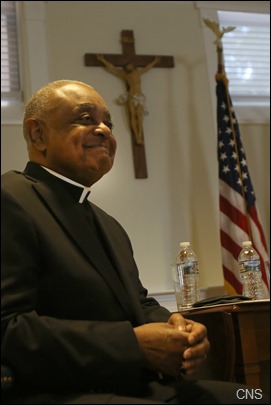 Archbishop Gregory is an extraordinary archbishop. He was the guest of honor at this year’s Bishop James Augustine Healy Award Dinner hosted by our Office of Black Catholic Ministries, and I have had the pleasure of being at his Eucharistic Congress in Atlanta twice. Of course, during his time as the president of the U.S. Conference of Catholic Bishops, he led us through the meetings that led to the passing of the Dallas Charter and then did an extraordinary job responding to the sexual abuse crisis.

Having him in Washington, where he will be the archbishop of one of the largest black Catholic communities in the United States, is also a great blessing and I am sure it will be a great source of pride for the people of Washington.

We wish him well, though we know will be hard for him to leave Atlanta after so many years of successful ministry there, but we know that the Archdiocese of Washington needs him. We accompany him with our prayers and best wishes as he responds to this latest call of the Church to serve as a shepherd.

This week we had also an appointment of our own here in the Archdiocese of Boston, with the naming of Thomas Carroll as our new Superintendent of Catholic Schools. 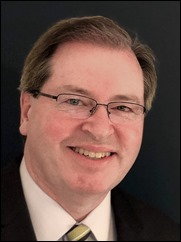 We are very grateful to the search committee, headed by John Regan, which did an extraordinary job in bringing forth the names of very worthy candidates. In the end, it was a difficult decision because there were so many fine choices.

Tom Carroll brings a great deal of expertise and experience to his new position and has a great record of working for education tax credits, which would be a very valuable contribution to Catholic education in the Commonwealth. He also has a strong sense of the importance of Catholic identity and excellence in our Catholic schools. So, we look forward to working with him.

We are also very grateful to Kathy Mears, who did such a great job as superintendent. We wish her Godspeed as she returns to her native Indianapolis.

This week I had dinner gatherings with two groups of our seminarians, one on Friday and the other on Sunday. I regularly get together with different classes of seminarians to pray Vespers and share a meal with them. It is an opportunity to get to know the seminarians better and to listen to their concerns and aspirations.

On both occasions, it was an opportunity to give them a sneak preview of the cathedral renovations. 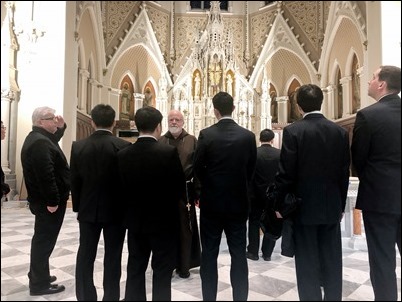 One of the details of the cathedral that you may not have seen before it is this plaque, which is in the vestibule. 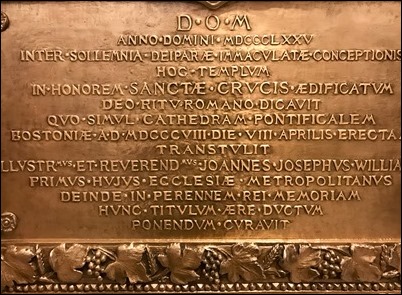 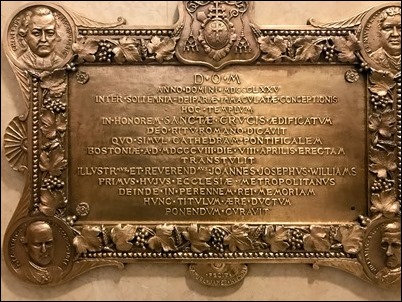 It commemorates the dedication of the cathedral on the Feast of the Immaculate Conception. Then, in the four corners are the photos of the four bishops of Boston who had served up until the time the plaque was erected.

I am always uplifted by these gatherings, and we are very blessed with the caliber of the men we have studying for the priesthood here in the Archdiocese of Boston. We are very grateful to our Vocation Director, Father Daniel Hennessey, who organizes these dinners for us.

Among the many different aspects of our outreach to victim/survivors of clergy sexual abuse is an annual Mass for victim/survivors and their families, which we celebrated Saturday in the Pastoral Center Chapel. It is an opportunity for many people to reconnect with the Church after having stepped away and is a very important part of our efforts to bring healing and reconciliation to those who were harmed. 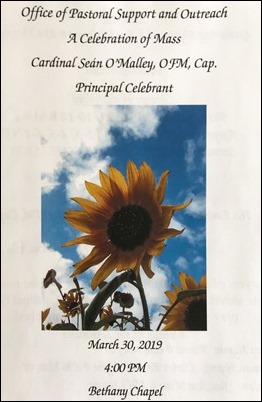 We are so grateful to Vivian Soper and all of those in our office of Pastoral Support and Outreach who do so much to organize this important Mass.

Monday, we hosted a gathering of Boston-area faith leaders at the Pastoral Center to discuss the ramifications of legislation being considered on Beacon Hill known as the Act to Remove Obstacles and Expand Abortion Access, or ROE Act. 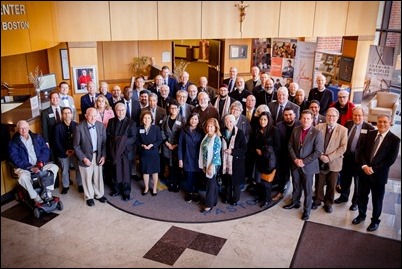 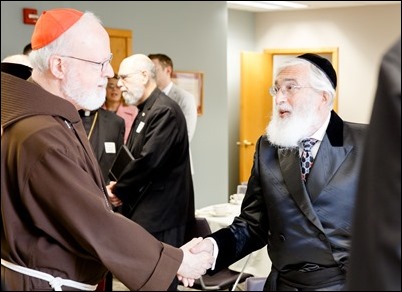 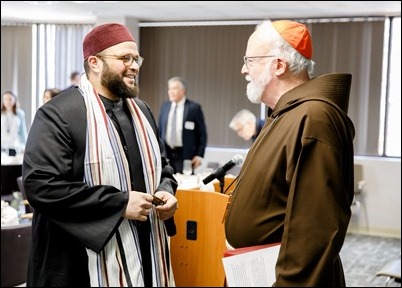 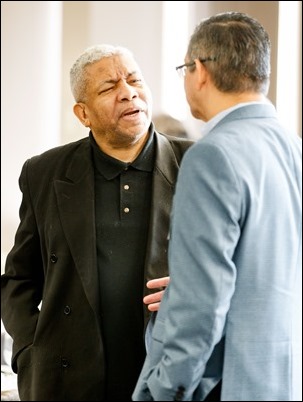 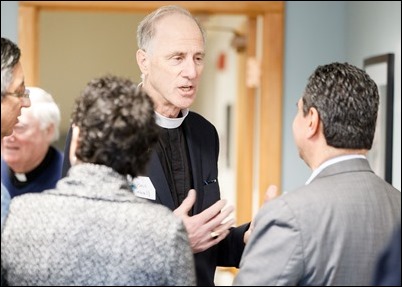 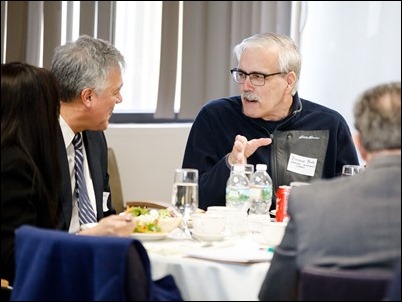 I addressed the meeting, and we also heard from George Cronin, Father Bryan Hehir, Fran Hogan, and Marianne Luthin. 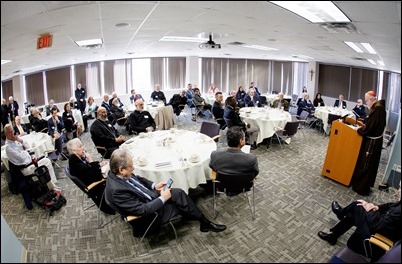 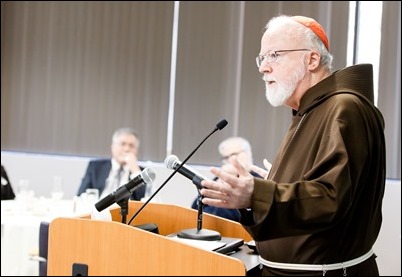 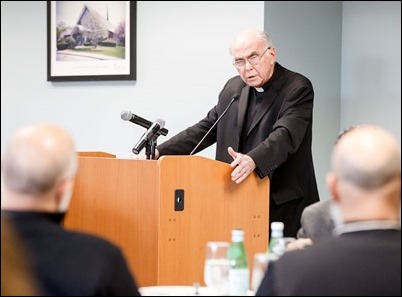 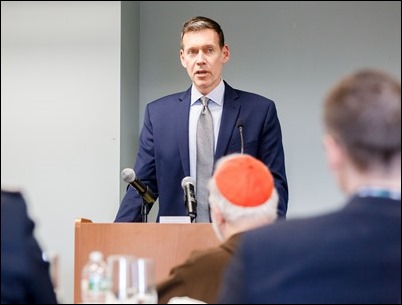 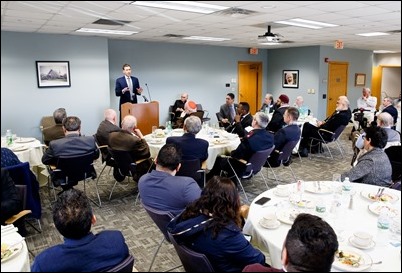 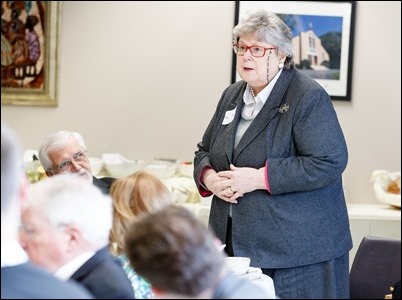 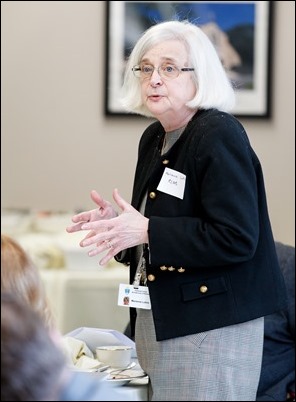 This legislation is being touted as a means of preserving present abortion access at the state level, but it really goes far beyond that. It would do away with the requirement that a minor receive parental or judicial consent for an abortion, open the way for full access to late-term abortions and does not demand that a child who is born alive as a result of failed abortion be cared for. It would also allow funds in a program intended to reduce infant mortality to be used to help pay for abortions. So, we were anxious to bring together the leaders of various faith communities to discuss this issue. 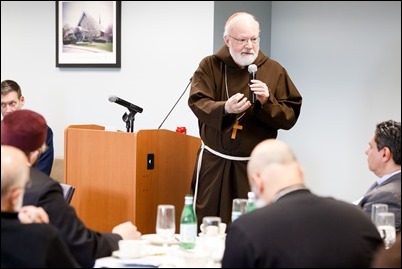 I was very gratified by the quick response of the interfaith and ecumenical community. Joining us were leaders of Protestant, Jewish, Muslim and Mormon communities who came together to discuss how we can let our people know about this legislation. Our fear is that people will not know this is even being considered until it is too late.

Polls indicate that this is not what the vast majority of Americans want. I think we need to remind legislators that, while many Americans are in favor of legal abortion, that does not translate to the kinds of radical and extreme provisions that are included in this proposed legislation.

We are so grateful to Vito Nicastro and Father David Michael of our Office of Ecumenical and Interreligious Affairs for their work in helping to organize this event, which came together on such short notice. 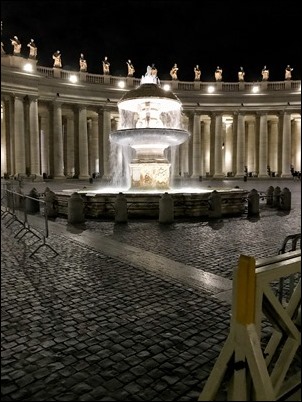 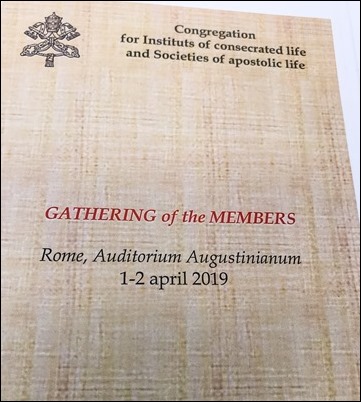 At that meeting, I was together with a number of Capuchin bishops.

In this photo you see Bishop Paolo Martinelli, OFM Cap., an auxiliary Bishop of Milan, giving one of the addresses. 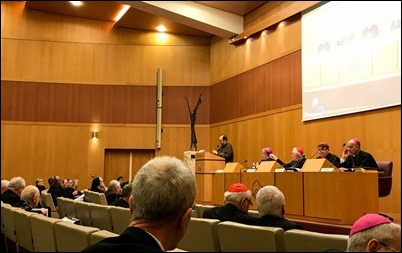 Milan is perhaps one of the largest Catholic dioceses in the world and, consequently, they have a huge number of priests and religious. His responsibility as an auxiliary is to deal with the religious of Milan. 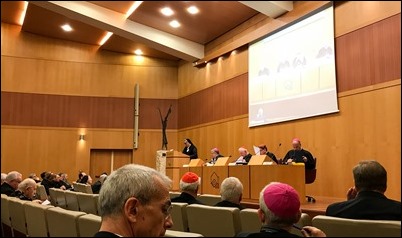 That afternoon, I had a meeting with the Holy Father at the Apostolic Palace about the ongoing work of the Pontifical Commission for the Protection of Minors. 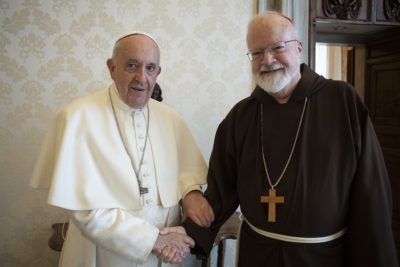 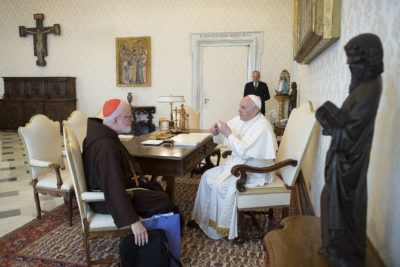 Leaving the meeting, I ran into the monks of the Taize Community, who were also there to see the Holy Father.

The Taize Community has a very interesting history. It is an international, ecumenical community based in France that brings Protestants and Catholics together to live in a monastic community. They have quite a ministry to young people, promoting evangelization and ecumenism with their songs and prayers.

Their current prior, Brother Alois, is a Catholic. 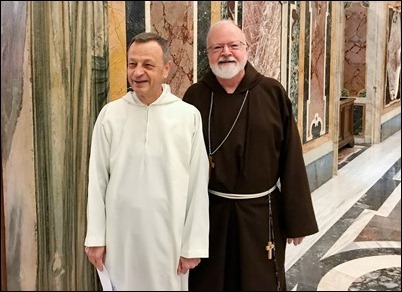 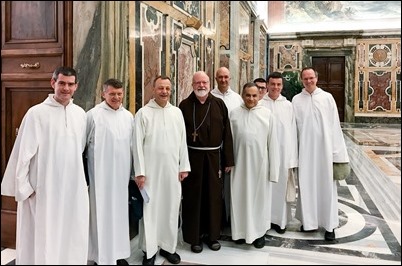 With the whole group

It was wonderful to have a chance to meet them.