Attending the Supreme Convention of the Knights of Columbus

As I begin this week’s posting I wish to share with you a statement I issued earlier today concerning St. John’s Seminary. In the midst of present challenges please know of my appreciation for your prayers for any person who has been harmed by actions or failures to act on the part of the Church, and for the seminarians, faculty and staff of St. John’s Seminary.

Earlier this week I was informed that two former seminarians of St. John’s Seminary in the Archdiocese of Boston had posted allegations on social media sites including the Archdiocese’s Facebook page that during their time at the seminary they witnessed and experienced activities which are directly contrary to the moral standards and requirements of formation for the Catholic priesthood.

At this time I am not able to verify or disprove these allegations. As Archbishop of Boston, with responsibility for the integrity of the seminary and its compliance with the Church’s Program for Priestly Formation, I am committed to immediate action to address these serious matters and have made the following decisions regarding St. John’s Seminary.

First, I have asked Msgr. James P. Moroney, Rector of St. John’s, to go on sabbatical leave for the Fall Semester, beginning immediately, in order that there can be a fully independent inquiry regarding these matters.

Second, I have appointed Rev. Stephen E. Salocks, Professor of Sacred Scripture, to serve as Interim Rector at St. John’s.

Third, I have appointed the Most Rev. Mark O’Connell, Auxiliary Bishop of Boston, Dr. Francesco Cesareo, President of Assumption College and President of the USCCB National Review Board, which advises the USCCB on matters of child and youth protection policies and practices, and Ms. Kimberly Jones, CEO of Athena Legal Strategies Group to oversee an inquiry into the allegations made this week, the culture of the seminary regarding the personal standards expected and required of candidates for the priesthood, and any seminary issues of sexual harassment or other forms of intimidation or discrimination. The inquiry will be staffed by Mark Dunderdale, Esq., Director of the Archdiocesan Office of Professional Standards and Oversight.

I have directed this group to proceed with due seriousness of their assignment and as soon as possible to submit to me the findings of the inquiry and a set of recommendations to assure appropriate standards of professional behavior in compliance with Church teaching at all levels of seminary life. The faculty, staff and students at the seminary will be advised of my expectation that they will fully cooperate with the inquiry.

The allegations made this week are a source of serious concern to me as Archbishop of Boston. The ministry of the Catholic priesthood requires a foundation of trust with the people of the Church and the wider community in which our priests serve. I am determined that all our seminaries meet that standard of trust and provide the formation necessary for priests to live a demanding vocation of service in our contemporary society.

Sunday I went to Most Holy Redeemer Church in East Boston to join them for their celebration of Cristo, Divino Salvador del Mundo (Christ, the divine Savior of the world), which is the patronal feast of the country of El Salvador – the only country in the world named after Christ. 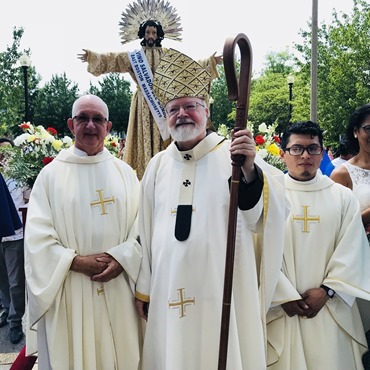 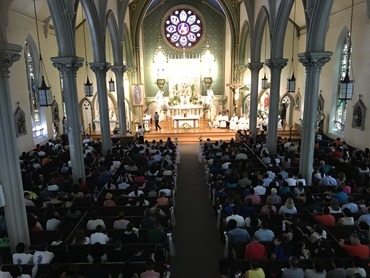 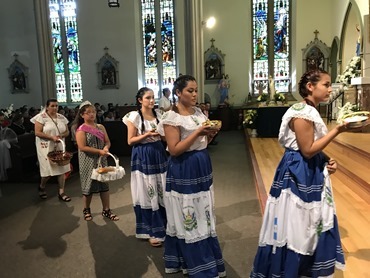 East Boston is home to the largest Salvadoran community in Boston, so it’s a very important feast, not only for the parish, but for the whole neighborhood.

We were joined for the celebration by the Consul General of El Salvador in Boston Ruddy Lazo and Vice Consul Marina Martinez. 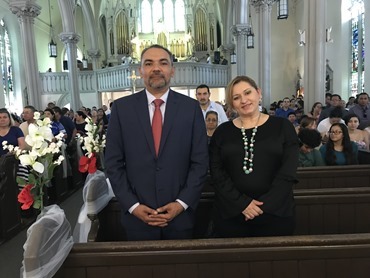 And, of course, we can’t fail to mention that Father Americo Santos, the parochial vicar at Holy Redeemer, is also from El Salvador. 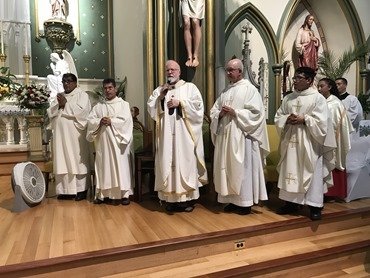 The statue that is carried in procession is that of the Transfigured Christ. In fact, the feast is usually celebrated on the Feast of the Transfiguration, which was Monday, but it was anticipated to allow more people to participate. 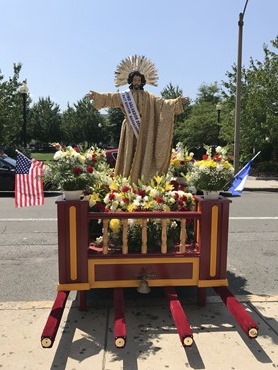 The men you see in purple are members of the Hermandad del Señor de Los Milagros (the Fraternity of the Lord of Miracles), which is a very important devotion in Peru. 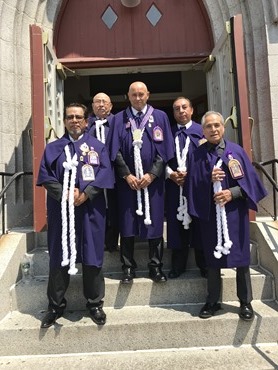 The procession they hold there for that feast, which is in October, is perhaps the largest procession in the world. Usually, several million people partake in it and they are all dressed in purple.

Holy Redeemer Church looks so beautiful after its recent renovations. The pastor, Father Tom Domurat, and his parish have done an extraordinary job renovating the church.

On our way back from East Boston to the cathedral, we passed by the Old Statehouse which is a beautiful historic building in downtown Boston. It was the seat of the British government during colonial times and is perhaps most well known as the site of the Boston Massacre. 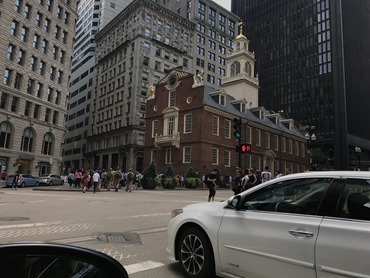 I took this photo because I was so impressed by the throngs of tourists packing the streets of Boston. I’ve never seen such huge crowds. Clearly, people everywhere have come to learn what we have always known — that Boston is a beautiful place to visit in the summer!

Then, I departed for Baltimore to attend the annual Supreme Convention of the Knights of Columbus.

Supreme Knight Carl Anderson opened the gathering on Tuesday with an address at the business session. 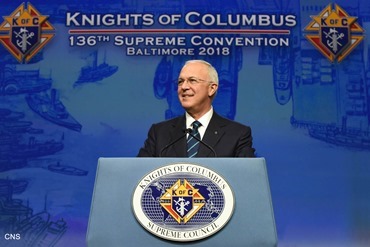 He updated us on the many important works of the Knights of the past year that included the contribution of more than $185 million dollars and 75 million volunteer hours to charitable works.

Of course, the States Dinner, which was held that night, is always an impressive sight. 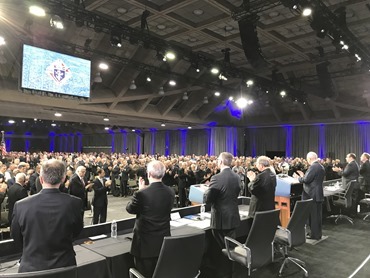 I very much enjoyed the procession of all the historical flags of the United States, beginning with the original colonial flag with 13 stars and ending with the present flag of 50 stars. 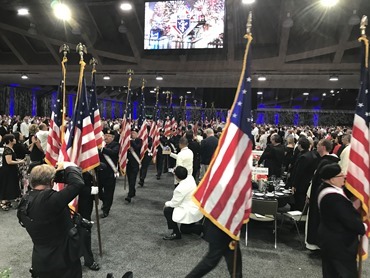 It is always very impressive to see the different delegations from all over the world in attendance.

In this picture, you see the yellow and blue flag of Ukraine and the white and red flag of Poland. 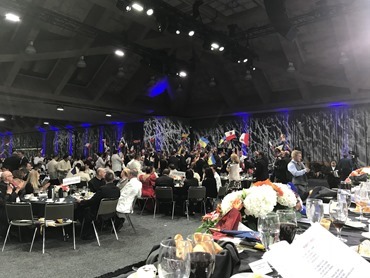 Among the other countries represented were the Philippines, Mexico, Canada and France.

Major Archbishop Sviatoslav Shevchuk of the Ukrainian Catholic Church delivered the keynote address for us. 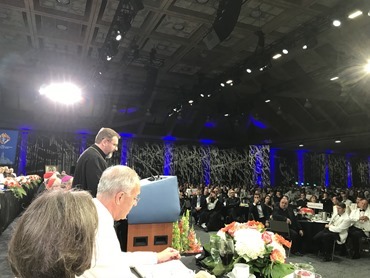 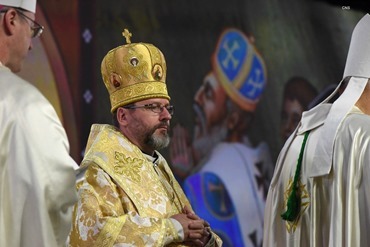 He gave a beautiful reflection on the situation of the Church in Ukraine and the importance of religious freedom. During the business session, we had also heard from Carl Anderson about the work the Knights have been doing to help the persecuted Catholics in the Middle East, including investing millions of dollars to rebuild villages in Syria so that the people can return to their homes. So, religious freedom was an important theme at the convention.

During the evening, I had a chance to catch up with the members of the Massachusetts delegation. 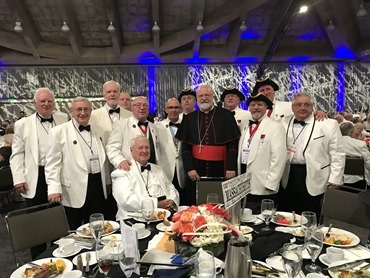 It is always very edifying to see the great works of charity that are supported by the Knights of Columbus, which now has nearly 2 million members and is the largest Catholic men’s organization in the world. They are an invaluable force for evangelization, promoting family life, and the works of mercy and justice in our Church. So, I am very happy to have been able to attend this year’s convention along with Bishop Robert Hennessey, Bishop Peter Uglietto and a number of our priests to show support for this vitally important organization. It is always a very uplifting experience for me.

Bishop Elliott Thomas, the retired Bishop of the Virgin Islands who just celebrated his 92nd birthday, had been living with us at the Jeanne Jugan Residence in Somerville. However, recently he was invited by the Redemptorist Fathers and Brothers to come to live in their retirement home near Baltimore. 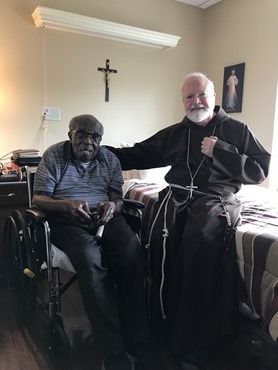 So, while I was in Baltimore, I was happy to have the opportunity to visit him and to bring him greetings from the many friends he has here in Boston. It was a joy to see how well he was doing.