Hello and happy New Year to you all!

As we mark the beginning of 2018, I want to take this opportunity to mark the passing of three extraordinary individuals in recent days.

After a long illness, God called Father Vincent Von Euw home on Christmas Eve. Bishop Hennessey celebrated his Funeral Mass last Thursday because I was out of town that day.

Father Von Euw was certainly a very beloved priest of the archdiocese who served for many years with the St. James Society in Peru and as pastor at St. Peter’s and then St. Ambrose in Dorchester.

Also last Friday, Lynn Finn, who was a Dame of Malta, passed away. She was a very extraordinary Catholic laywoman who was dedicated to service of the poor and the sick.

In addition to being a devoted wife, mother and grandmother, she was a nurse who used her talents to help others. She was a nursing instructor at Boston College and did a great deal of work with the Vietnamese boat people and worked in Haiti. She also helped establish the nursing program at St. Anthony Shrine on Arch Street, as well as our own Cathedral Cares program here at the Cathedral of the Holy Cross.

I was happy to be able to attend her wake on Tuesday and express my condolences to her husband Joe and her family.

Finally, Wednesday, I presided at the funeral Mass of Msgr. Michael Groden at St. Cecilia’s Church in the Back Bay, where he had been pastor. 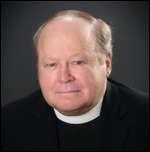 Though he had many accomplishments, I think it is as founding director of our Planning Office of Urban Affairs that Msgr. Groden will most be remembered. In his 35 years at the Planning Office, he laid firm foundations for this organization which continues to do so much to develop housing for low income and working families.

My scheduled activities this week were somewhat curtailed because of the major snowstorm that affected so much of our area on Thursday. For example, I had been scheduled to give several talks at the national leadership conference of FOCUS (The Fellowship of Catholic University Students) held this week in Chicago, but I was unable to attend because my flight was canceled. I’m sorry to have missed it, though I was happy to hear that a number of people from Boston were able to attend.

Thankfully, the foul weather (if you don’t count single-digit temperatures) held off until the latter part of the week, and so didn’t interfere with our New Year activities here in the archdiocese.

As I do each year on New Year’s Eve, I went to St. Clement Shrine in the Back Bay to celebrate a midnight Mass, preceded by a time of prayer and adoration, to welcome the New Year. 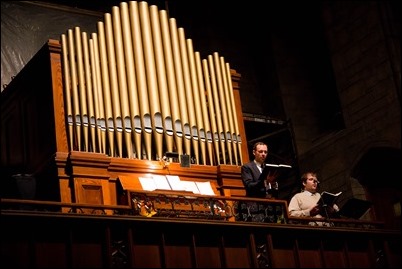 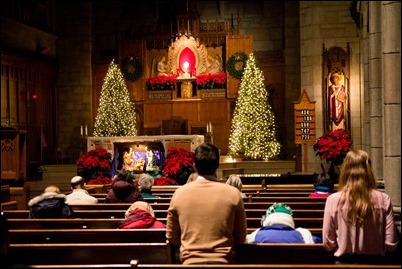 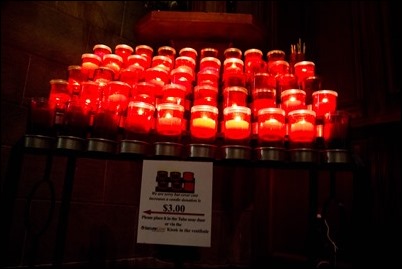 In recent years, this Mass has had a particular focus on gathering the young adults in the archdiocese, and I was happy to see we had a full church, despite the freezing temperatures. 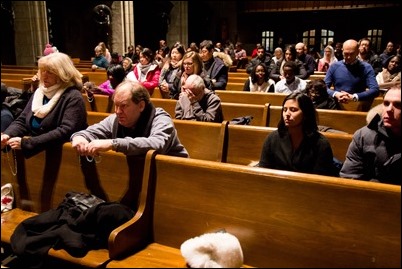 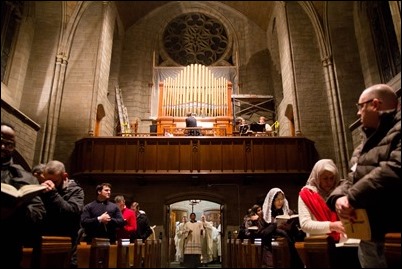 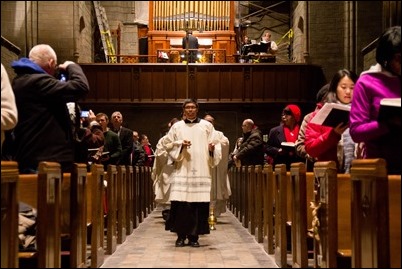 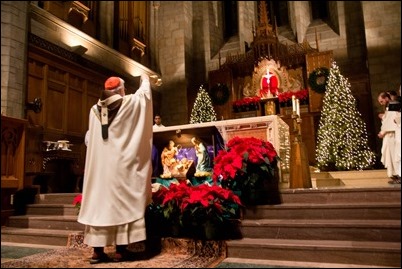 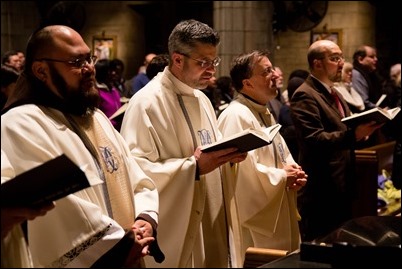 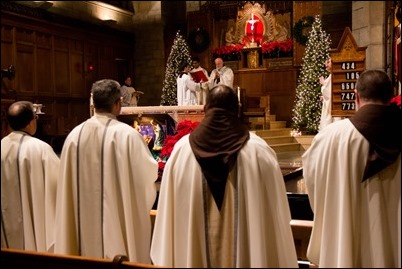 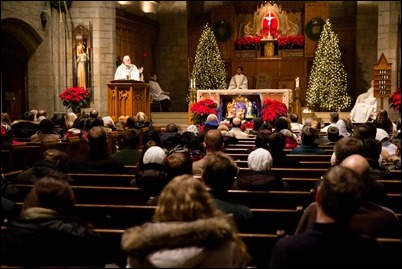 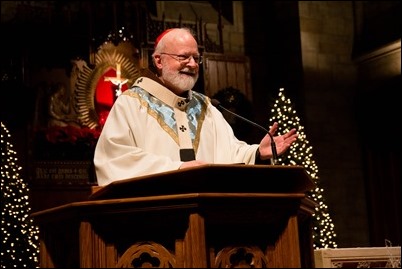 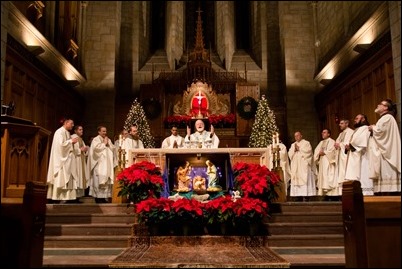 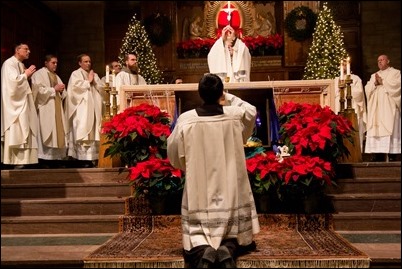 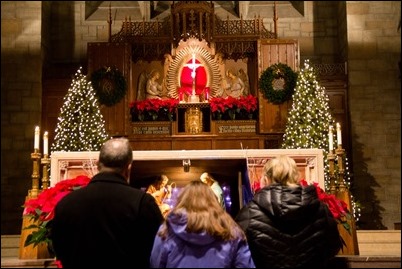 I am so pleased that so many took this opportunity to end the old year and begin the new one with the Lord.

Before the Mass, I joined the family of Antonio Enrique, the editor of our archdiocesan newspaper, The Pilot, for dinner. I brought with me Father Paul Dressler, who was visiting from Washington. 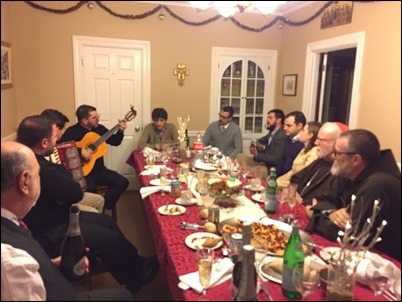 We prayed Vespers together with the whole family and then had a lovely New Year’s Eve meal, after which we had a time of singing of Spanish Christmas carols.

On New Year’s Day, I celebrated the annual Mass with the Haitian community of the archdiocese, because, in addition to being the Solemnity of Mary the Mother of God, January 1 is also Haitian Independence Day.

This year, the Mass was held at the Basilica of Our Lady of Perpetual Help (better known as Mission Church) rather than at the Cathedral because the upper church is closed and we thought the lower church would not be large enough to accommodate the great number of people. 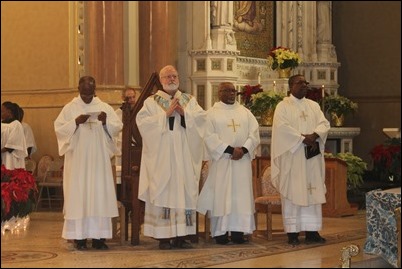 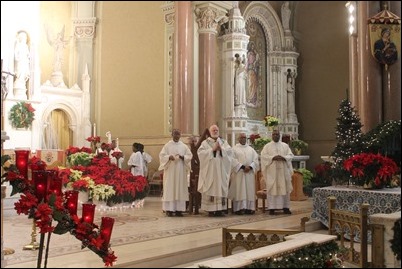 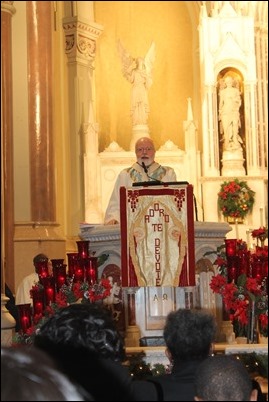 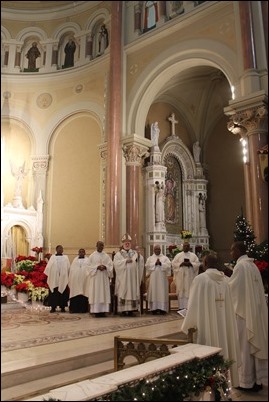 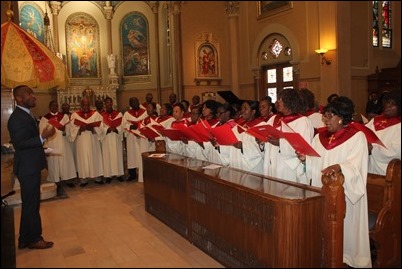 That prediction proved correct because we had a full church at the Basilica, which is one of the largest churches in the archdiocese. It was also a very appropriate venue because Our Lady of Perpetual Help is the patroness of Haiti. 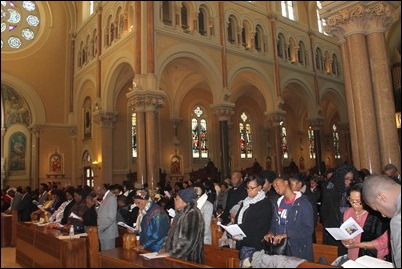 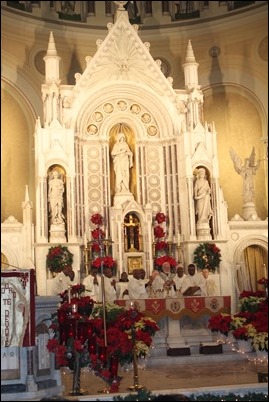 We had a lovely celebration which, of course, ended with the singing of the Te Deum, which is a traditional Latin hymn of thanksgiving followed by the singing of the Haitian National Anthem. It is always a very uplifting experience! 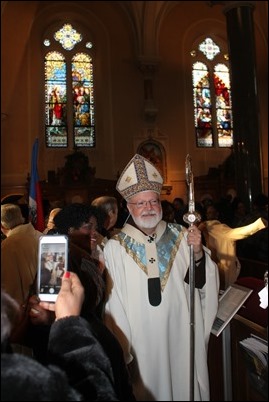 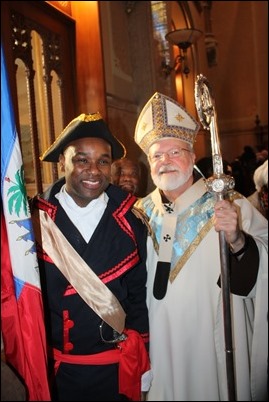