As you may remember, last week I was in Rome for a conference on child protection in Catholic education at the Gregorian University, which was held on Thursday.

Following the conference, I remained in Rome for our plenary assembly of the Pontifical Commission for the Protection of Minors, which ran from Friday until Sunday.

Among the many issues we discussed was, of course, the resignation of commission member Marie Collins, as this was our first plenary gathering since she decided to step down.

We are so grateful that Marie is willing to continue to assist us in our ongoing education efforts and the commission discussed a number of ways to ensure that the experiences of clergy abuse victims continue to inform and shape our work.

We also discussed the ongoing issue of the Holy See providing prompt and appropriate responses to correspondence from clergy abuse victims. While we understand that there may be some challenges to accomplishing this, nevertheless we remain committed to solving this problem. The commission is considering several ideas that we will submit to the Holy Father for his approval.

Thursday evening, we were invited to have dinner with the Irish Ambassador to the Holy See, Emma Madigan, and her husband Laurence. (Ironically enough, the ambassador’s residence is a palazzo built by Cardinal Wolsey, the Prime Minister of Henry VIII.) 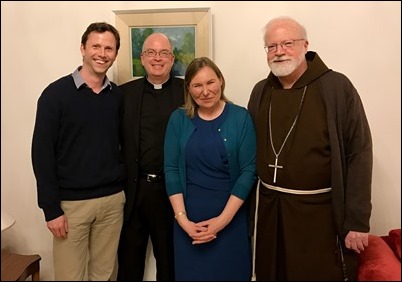 Msgr. Oliver and myself with Ambassador Madigan and her husband, Laurence

I was very gratified that the ambassador had come to our conference on Catholic education. Of course, in Ireland, many of the schools are Catholic schools, so it was a topic of great concern to her and her country.

The meetings of the commission were held at the Paolo VI Residence in Rome, and right next-door is the Church of St. Luigi di Francia (perhaps better known by most as St. Louis de France), which I had a chance to visit during our midday break on Saturday.

The church is just stunning. 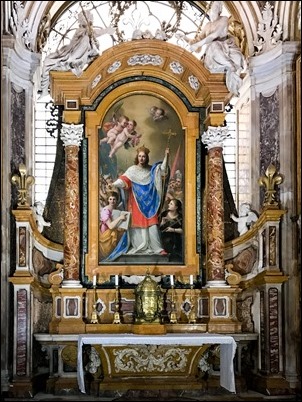 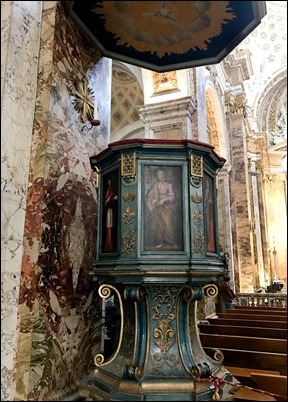 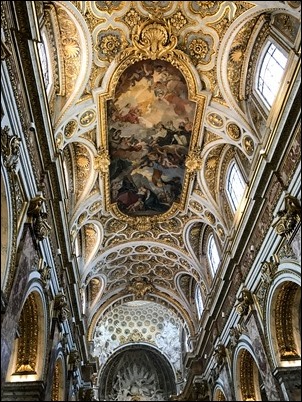 It is noted particularly for the three paintings by Caravaggio that hang there, all of which deal with the life of St. Matthew, including the “The Calling of St. Matthew,” which so inspired Pope Francis. 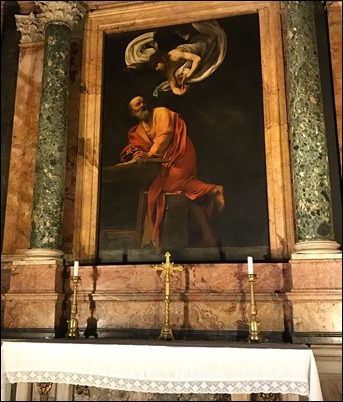 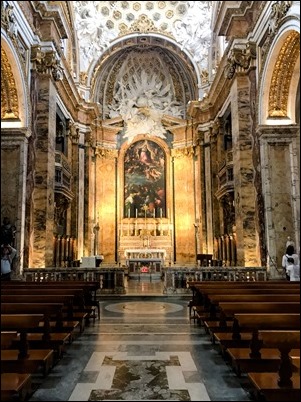 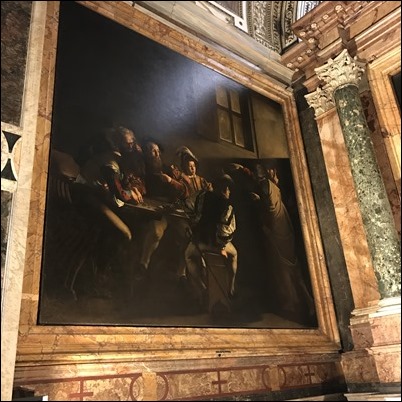 In it we see Christ pointing at St. Matthew as he sits at the tax collector’s table clutching his money, calling Matthew to get up and follow him. Matthew, as a tax collector for the Romans, would have been considered the very worst kind of person, a traitor to his own people. As we know, St. Matthew listened to the call, left the table and became an Apostle. 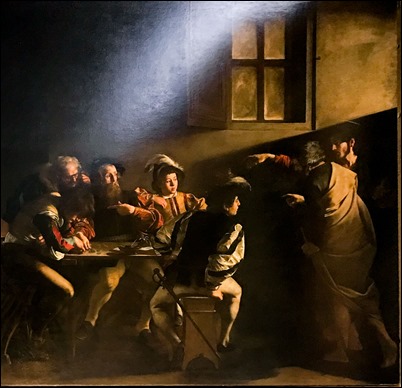 The Holy Father has said he would often contemplate this image of one who is a sinner but who is looked at with mercy by Christ, and it led him to pick as his episcopal motto, and then papal motto, “Miserando atque Eligendo,” (Having mercy and choosing him).

Whenever I’m in Rome, I always like to gather for dinner with our Boston seminarians who are studying there. So, we got together with them Sunday night at a local restaurant, where we were also joined by Msgr. Paul McInerney. It was very good to see them all. 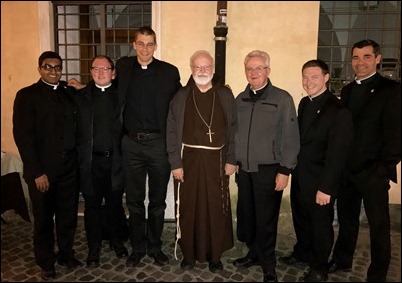 Wednesday, I was back in Boston and we had one of our regular gatherings with the Major Superiors of Men Religious in the archdiocese. It’s always a wonderful opportunity to be able to be together with them, hear about some of the recent activities of the different orders, and share ideas and common concerns. 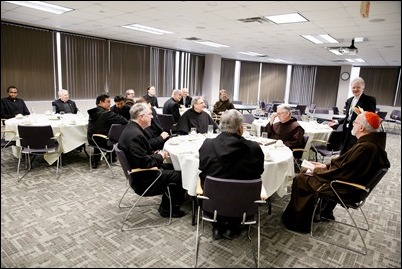 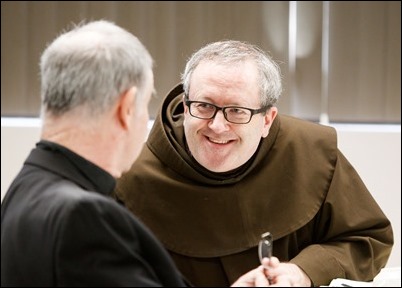 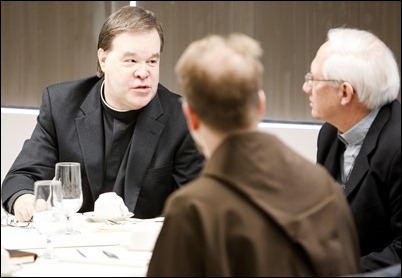 During these meetings, we often invite someone to speak to us on a current topic. This time, we invited Father Bryan Hehir to address us on some of the major themes of Pope Francis’ pontificate. 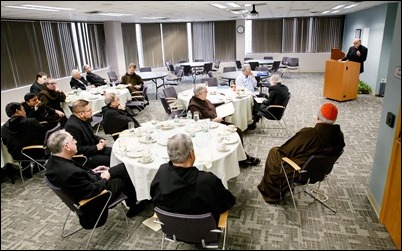 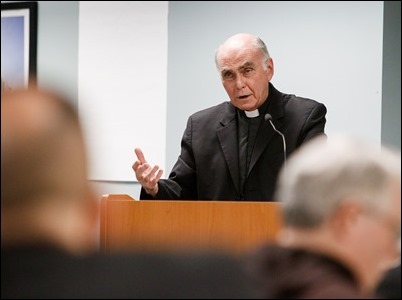 We are so grateful to Sister Marian Batho for organizing these gatherings and for all that she does in her important work as our Delegate for Religious. 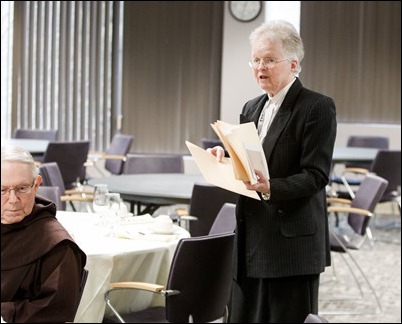 Then, Tuesday evening, George and Mary Ryan joined us for dinner at the Cathedral. 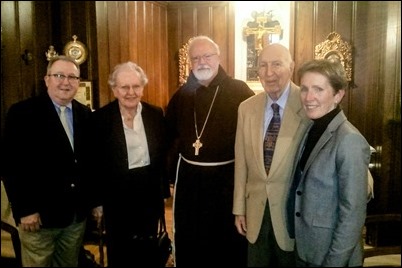 George, who is a World War II veteran, had for many years served in the leadership of the Order of the Holy Sepulchre as Northeast Lieutenant and then on the Grand Magisterium, the central administration of the Order, in Rome. Also with us was their daughter, ‘the other’ Mary Ryan, who serves on the archdiocesan finance council and her husband Joe Rizzo.

We had a lovely chat and George and Mary reminded me that they are celebrating their 72th wedding anniversary this year! We also discussed a book about the Pirate Queen O’Malley, which I discovered Mary didn’t enjoy as much as I did!

Thursday, I also gathered with our recently ordained priests at the Pastoral Center. We began with lunch followed by a time of discussion and we also heard an address by Father Hehir on the topic of immigration. 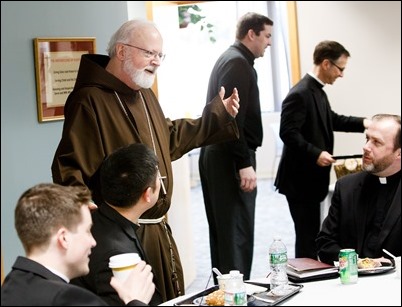 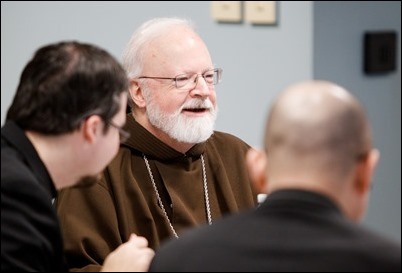 As we always do, we concluded our gathering with a Holy Hour in Bethany Chapel. 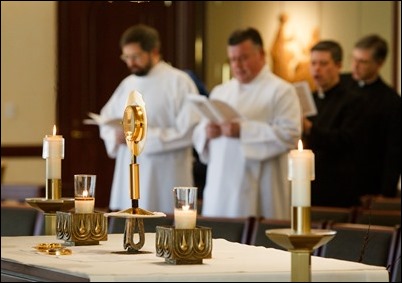 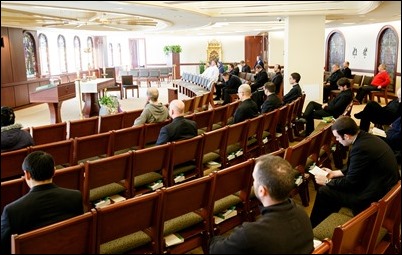 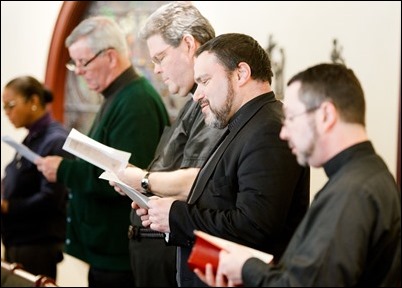 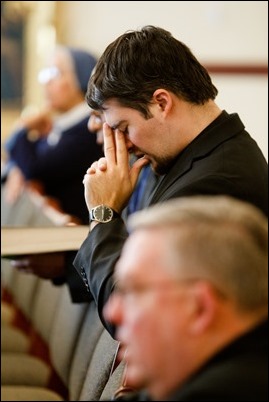 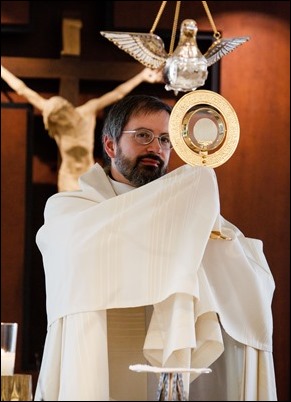 Finally, I want to conclude this week inviting all of you to join us for the Mass of Thanksgiving for Those Serving in Child Protection Ministries, which will be celebrated by Bishop Mark O’Connell Saturday, April 1 at 6 p.m. at Our Lady Help of Christians Church in Newton.

April is National Child Abuse Prevention Awareness Month and we are holding this Mass as a way to thank and celebrate all those in the archdiocese — in our schools, parishes, agencies and Central Ministries — who assist us in some way in implementing our child protection programs.

Over the last 15 years, the archdiocese has educated more than 190,000 people on child protection. We know that this has played a great part in making not only our churches and schools, but also our communities, safer places for children and we are so grateful to all those who played a part in it.