This week I am in Rome for meetings with the Council of Cardinals and the Holy Father but, before I left, on Thursday I was able to celebrate the funeral Mass for Msgr. Leonard Coppenrath at St. Theresa’s Parish in West Roxbury. 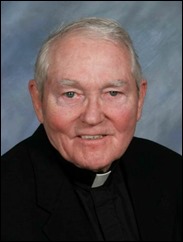 As those in the Boston area surely recall, Thursday we had a very bad snowstorm, but I was very pleased that I was able to make it to the funeral. Unfortunately, there were only a couple of other priests who were able to be with us. But monsignor had a very large family, many of whom were able to be there, and it was a very moving celebration. 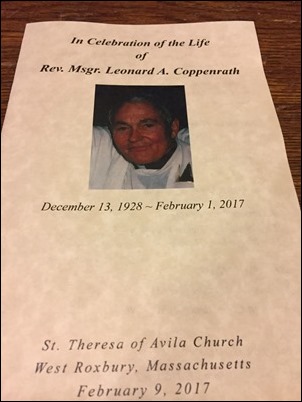 The pastor of St. Theresa’s, Msgr. William Helmick, delivered a beautiful homily and reflection, highlighting the high points of the long and distinguished service of Msgr. Coppenrath to the Church and, following the Mass, two of his family members gave very touching reflections on his life. 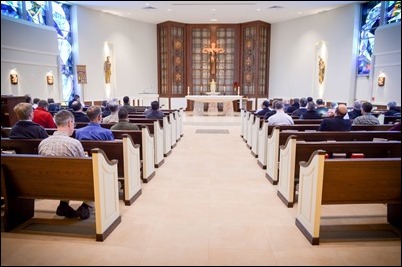 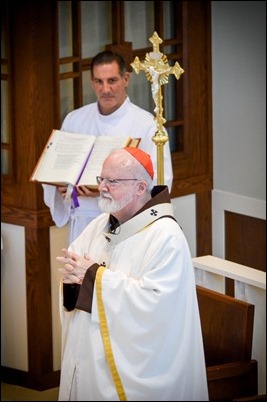 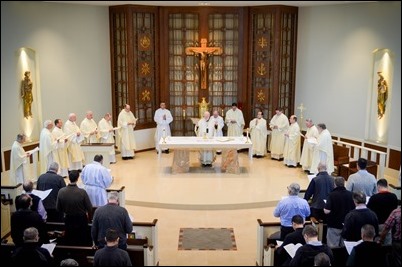 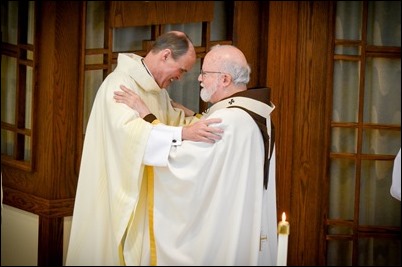 Because it was a Friday, the Mass was celebrated in Spanish. Since the last several times I have visited the seminary have always happened to be on a Friday, I joked with them that I only celebrate Mass in Spanish at Pope St. John XXIII! But, in all seriousness, I’m very pleased that they have this practice, because it’s important for our future priests to be exposed to different languages in the liturgy. 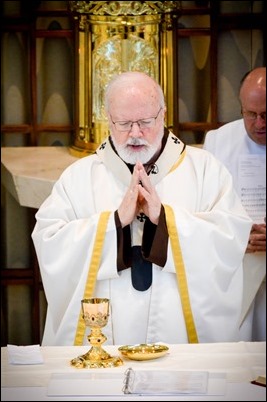 After the Mass, I gave a talk followed by a question and answer period with the men who were there on the discernment retreat. We were actually quite lucky because, despite all the snow the day before, Friday was a clear day, so it was a sort of window of opportunity for people to make it to the retreat. Fortunately, we had a very good turnout. 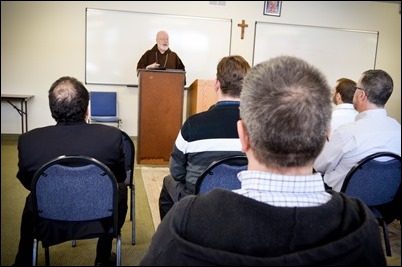 Later that day, I went to the Betania II Marian Center in Medway to join the retreat for men who are potential candidates for St. John’s Seminary in Brighton. I was so pleased to see such a large number of our current seminarians there to help with the retreat and to give witness talks. 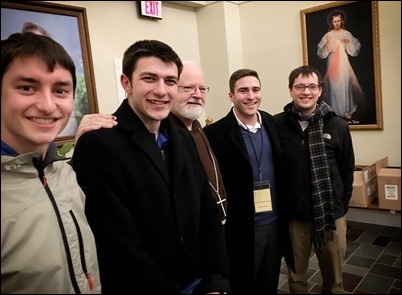 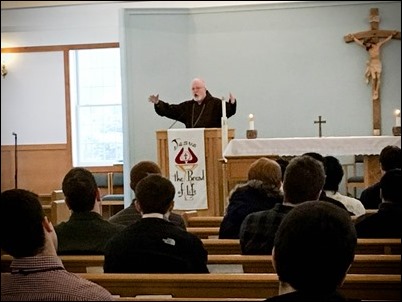 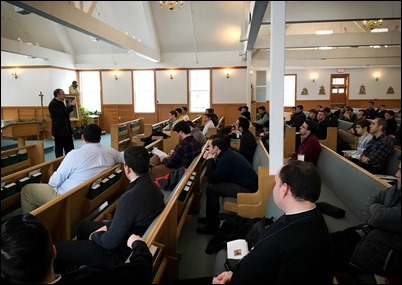 I gave the conferences for them Friday night and Saturday. Since I was unable to stay until Sunday, I asked Bishop Robert Reed to celebrate the closing Mass for the retreat back at St. John’s Seminary.

Saturday we had some more snow, but thank goodness only in the morning, so by that evening I was able to make my flight to Rome for the meetings with the Holy Father. 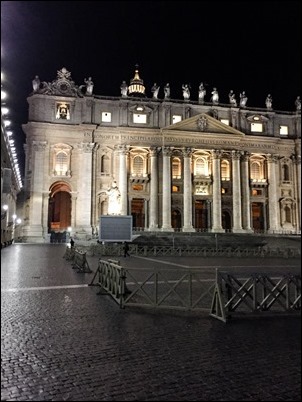 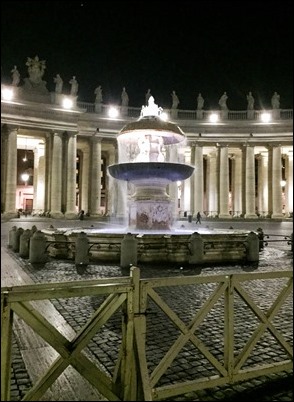 At this meeting we focused on reviewing the workings of the Congregation for the Evangelization of Peoples, the Congregation for the Oriental Churches and the Pontifical Council for Interreligious Dialogue. We also heard from the Prefect of the Secretariat for Communication, Msgr. Dario Edoardo Viganò, who briefed us on the ongoing reform of the Holy See communications operations.

We also took advantage of our gathering to issue a declaration thanking the Holy Father for his Christmas speech to the Roman Curia, in which he provided guidance for the work of our Council. We also assured him of our continued support of him and his teachings. 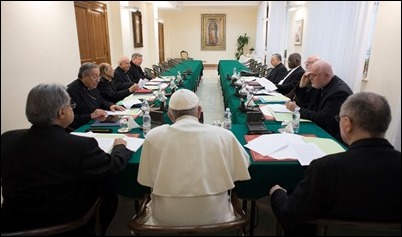 During our time together, we joined the Holy Father Monday and Tuesday for Mass, and on Monday we were also joined by Father Adolfo Nicolás, the recently retired Superior General of the Jesuits. The Holy Father offered the Mass for him and bade him farewell, as he is now going to reside in the Philippines. 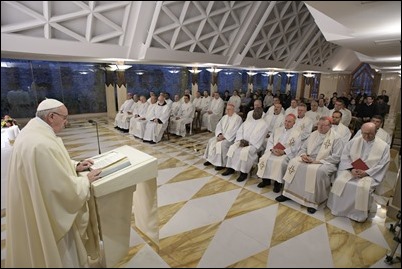 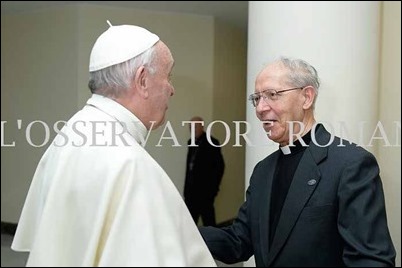 As I always do during these times in Rome, I took the occasion to visit with different people during breaks or for dinner after we’ve concluded our day of meetings. One evening I had dinner with our seminarians studying in Rome and then on Thursday, after our meetings, I joined the Capuchin community in Rome for lunch.

On my way back, I stopped in at the Church of Santa Maria sopra Minerva which is the beautiful Dominican church where St. Catherine of Siena is buried. 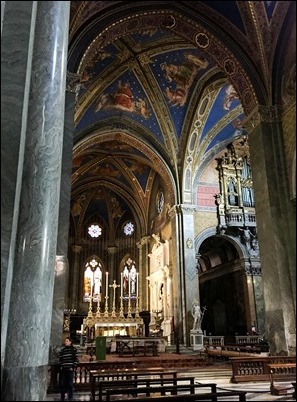 Continuing on my way, I stopped by the Trevi Fountain because many years ago, as a seminarian, I threw a coin into the fountain. They say that if you throw coin into the fountain you will come back to Rome. So, I went there to see if I could retrieve my coin, so I could stop having to come to Rome so often! 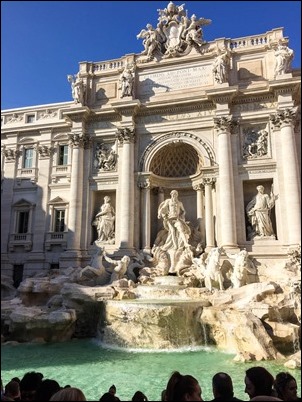 I also want to share with you this photo of the new McDonald’s which is just outside St. Peter’s Square in a Vatican-owned building, which used to house a bank. I have to confess, I snuck in one morning for an Egg McMuffin! 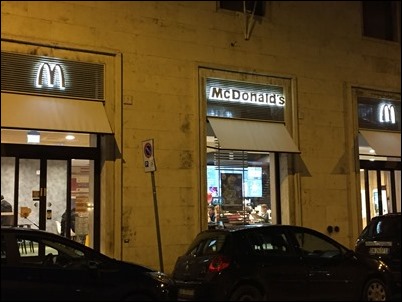 Finally, Thursday night, I had dinner at the Redemptoris Mater Seminary of Rome where Kiko Arguello, one of the initiators of the Neocatechumenal Way who is also an artist, had just finished a beautiful mural in the seminary chapel. 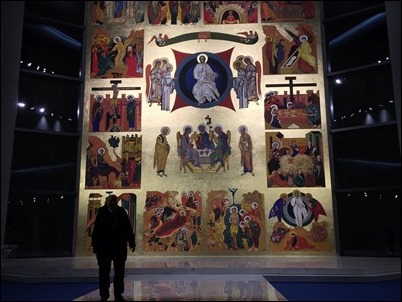 He and a team of artists had just worked for about a month to complete it, and it is just stunning. In fact, they had just held the dedication the night before and all the artists were still at the seminary. So, before dinner, Kiko introduced me to the artists and gave an explanation of the theological symbolism present in each of the panels. I was very impressed!