The annual gathering is modeled after an event in Rimini, Italy, also sponsored by Communion and Liberation, called “Il Meeting,” which it is the largest annual cultural event in Italy.

We are so grateful for the presence of Communion and Liberation in the Archdiocese of Boston, with members of the Priestly Fraternity of St. Charles Borromeo caring for St. Clement Parish and School in Somerville; a community of Memores Domini consecrated laymen, many of whom are physicians or hospital administrators, who live in Cambridge; as well as many laypeople and diocesan priests who participate in the Communion and Liberation spirituality. 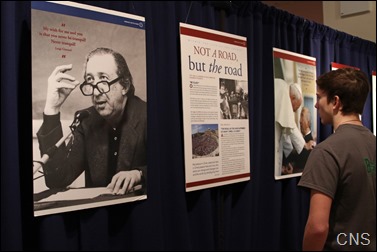 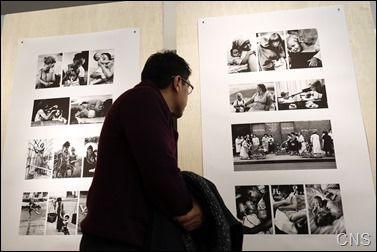 Each year the New York Encounter has a number of different talks presented with exhibits throughout the weekend, all centered on a particular theme. This year the theme was “Reality Has Never Betrayed Me.” 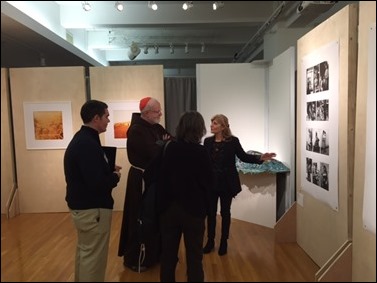 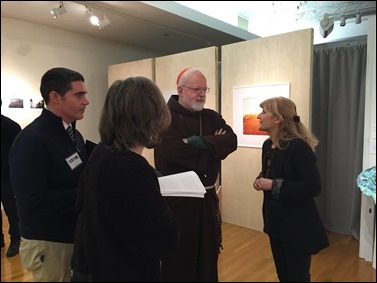 In addition to attending the Encounter, I was invited to celebrate the principal Mass on Sunday, which was concelebrated by the Apostolic Nuncio to the United States, Archbishop Christophe Pierre; Bishop Steven Raica of Gaylord, Michigan; and many priests, including Father Julián Carrón, the head of Communion and Liberation worldwide. 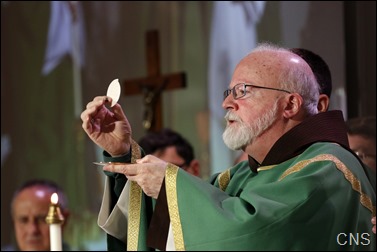 The Gospel last Sunday presented St. John the Baptist proclaiming “Behold the Lamb of God,” and in my homily I developed that theme.

In the Scriptures, the symbolism of the Lamb is very strong. In the prayers of the Mass, it is the title used most often for Christ – at six different points in the Mass, he is referred to as the Lamb, and also thirty times in the Scriptures of the New Testament. In my homily, I explained how that symbolism begins in the Old Testament, with the sacrifice of Abel, the sacrifice of Isaac, and the Paschal Lamb of Moses at the time of the Exodus. I then spoke of the different themes of the Lamb representing the sacrifice of Christ, who served as the prototype of martyrs. 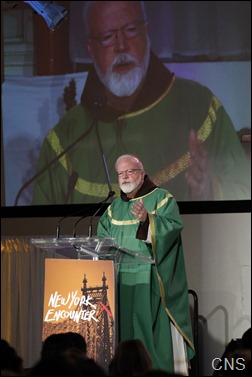 I also spoke about the famed director Martin Scorcese’s new film, “Silence,” which deals with the martyrs of Japan. The film is very well made and very powerful, but I feel that it is important to note that, unfortunately, it does not tell those who view it that after the last priests were martyred — and also very many Japanese Catholics were also martyred and tortured — the underground Church survived for 250 years without any priests or contact with the Church outside of Japan. The first time the Church had a public presence in Japan after that period was in 1865 when the diplomatic corps brought a priest from France to minister to the foreigners. At that time, 30,000 Catholics who had been secretly living their faith in a clandestine fashion for generations came forward. This was a powerful example of the blood of the martyrs being the seed of the Church and an important part of the story of the Church’s missions in Japan.

On Monday, went to St. Katharine Drexel Parish in Roxbury to participate in the annual Rev. Dr. Martin Luther King Day Prayer Breakfast, which is sponsored by the parish in collaboration with the Archdiocese’s Black Catholic Ministries. 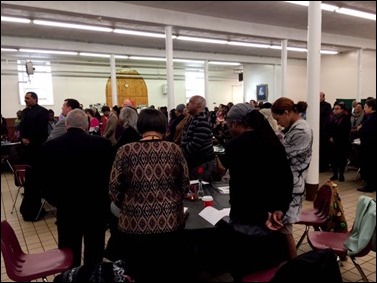 As always, the breakfast featured a performance by the Archdiocesan Black Catholic Choir, led by Meyer Chambers. 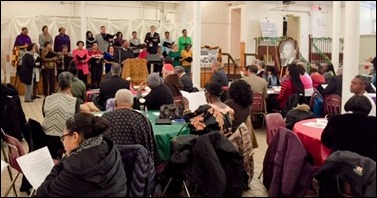 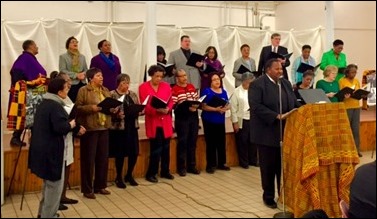 The keynote speaker for this year’s gathering was Dr. Randall Kennedy of Harvard Law School. He gave a stunning presentation on the history of civil rights in the United States, inviting us to deepen our knowledge of the life and work of Dr. Martin Luther King. 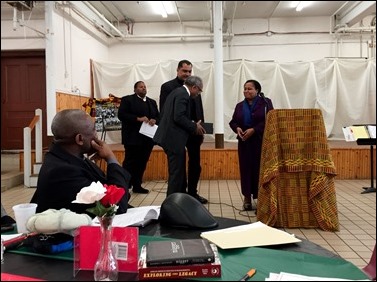 Of course, Dr. King is one of the most significant historic figures in our country who helped to bring an end to many of the gross violations of civil rights that were the heritage of the slave culture. He was a man whose religious principles and devotion to the Gospel allowed him to embrace the path of nonviolence and promote a brotherhood of unity among all peoples. For these reasons, observing his birthday is a very significant civic act. It is particularly important in current times, when there has been a rebirth of racial tensions in our country, to reflect on Dr. King’s message and the sacrifices that he and those involved in the civil rights movement made.

We are very grateful to Father Oscar Pratt, the pastor of St. Katharine Drexel, and all the parishioners who worked so hard to make this wonderful celebration possible.

On Tuesday, I was visited at the Pastoral Center by Sara Stanton of Cara Travel, who organized our pilgrimage last summer to the Shrine of Our Lady of Knock in Ireland. 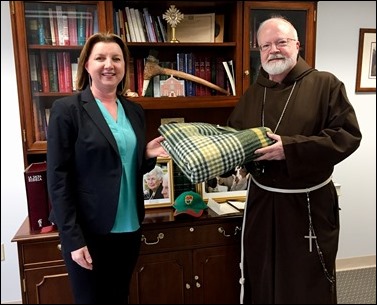 Sara was asked by the Mayo County Council to present me with this very beautiful woolen blanket, created by the Foxford Mills in County Mayo. The mill was founded on the River Moy in the 1890s by the Irish Sisters of Charity to help revitalize the area that had been so greatly affected by the Great Famine. Despite many challenges the over the last century, Foxford is thriving and continues to be a very important local business. Today, they’ve grown to not only produce fine woven goods, but also linens, homewares, and even furniture.

This particular blanket is a replica of one made at the mills and presented to the great Irish republican leader Michael Collins, to mark his appointment as commander the new Irish Army.

That evening, I went to St. John’s Seminary to participate in one of our ongoing St. Andrew Dinners for young men considering a vocation to the priesthood. I was so encouraged to see such a large group of young men; about 120 attended the gathering.

As we always do, we began our gathering with a Holy Hour followed by a dinner together and a tour of the seminary. Following the tour, we heard witness talks from three seminarians and I also addressed the young men, after which we had a question and answer session. 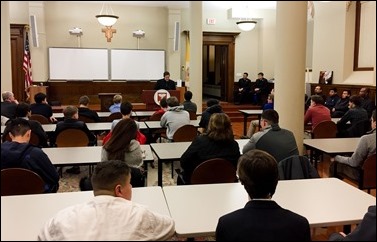 It was a wonderful evening, and we are so grateful to our Vocations Office for organizing the event, as well as to all the priests and parishioners who accompanied these young men in an important step toward discerning the possibility of a vocation to the priesthood. We also want to extend our thanks to St. John’s Seminary for hosting us.

On Thursday, we had one of our regular meetings at Pastoral Center of those priests who have been ordained within the last five years.

As I have previously mentioned, instead of gathering in the evening, recently we’ve begun gathering for lunch, followed by a time of conversation. 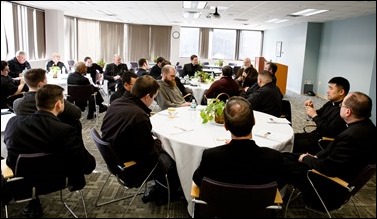 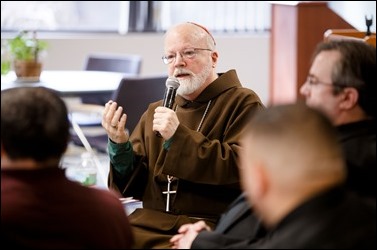 In our discussions, we talked about some of the aspects of the spirituality of a diocesan priest and read from some of the documentation of Companions in Christ, which is a fraternity of diocesan priests and seminarians in the Archdiocese of St. Paul and Minneapolis. We also reflected on some of the themes discussed at our recent Presbyteral Convocation, particularly around how Jesus managed his time.

After our talk, we concluded with a Holy Hour. 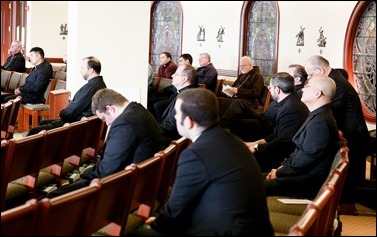 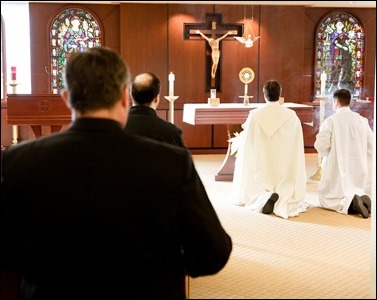 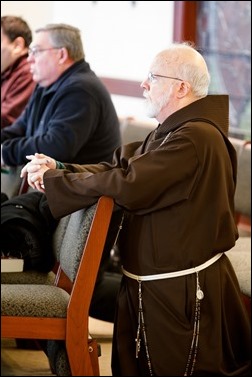 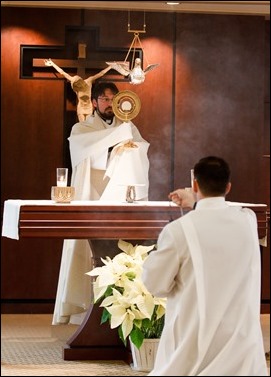 Finally, as many of you know, last week I was appointed to the Congregation of the Doctrine of the Faith by the Holy Father. I am deeply humbled and honored by this appointment and am hopeful that this new position will allow us to build even closer collaboration between the Congregation and the Pontifical Commission for the Protection of Minors.

I know much has been said and written recently about the work of the Pontifical Commission, and have noticed that at times these are some misunderstandings of its role. The Commission is made up of almost twenty people from throughout the world — laity, religious and clergy — and most of the members have professional experience in the field of child protection. It is not charged with evaluating or responding to individual cases of abuse, past or present, but rather serves to advise the Holy Father by making recommendations for educational efforts and programs for the prevention of the abuse of minors or vulnerable adults in dioceses and religious communities throughout the world. Members of the Commission also assist with the implementation of these efforts and programs.

In fact, in recent days, Msgr. Robert Oliver, a priest of the Archdiocese of Boston who is serving in Rome as Secretary for the Commission and Commission member Sister Kayula Lesa have been making presentations to the bishops of the Zambian Episcopal Conference to assist them in their own child protection efforts. Going forward, in the first half of this year, there will be similar visits by Commission members to Colombia and Bangkok.

In response to recent criticism by Italian journalist Emiliano Fittipaldi, commission member Baroness Sheila Hollins offered the following, which I think gives a very clear explanation of the work and role of the Commission:

As a member of the Pontifical Commission for the Protection of Minors since March 2014, I have personally attended 8 Plenary meetings of the Commission, in addition to numerous working group meetings. Members have had more than 50 educational engagements in 5 continents during the last 12 months, ranging from a couple of hours to three day dedicated workshops for church leaders, staff and volunteers. The intensity of the global educational and policy work underway is quite different to Fittipaldi’s dismissive suggestion that the commission has only met on 3 or 4 occasions. Pope Francis has endorsed our recommendations, which will require significant culture change and time to be implemented in practice. Pope Francis as the worldwide spiritual leader of the Catholic Church has a relationship with all members of the Church but would not normally interfere with the role of the local hierarchy. He is a pastor, not the governor of the local church. Diocesan Bishops are responsible for the local church, and Religious Superiors for their communities, and they are expected to ‘get on with it’. If they are having difficulties fulfilling their responsibilities, there are advisory structures in place to assist them. Readers can find more details of the Commissions’ work on its website, http://www.protectionofminors.va .

Going forward in the New Year and always, it is our prayer that the Church and all her people will always hold the protection of children and vulnerable adults as among the highest priorities.