I want to begin this week noting the passing of Father Michael Scanlan,TOR. 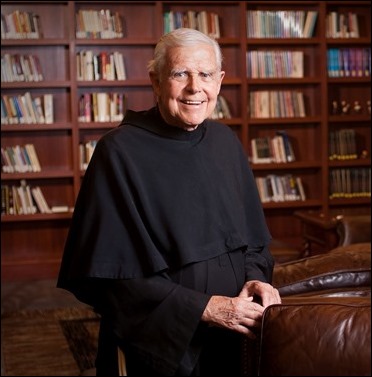 He was an outstanding churchman who, in the 1970s, was named president of what was then the College of Steubenville. He truly re-founded the university and gave them an incredible impetus to train committed disciples in the Church.

He made Steubenville a center of spirituality, evangelization and theology. A majority of the students attend daily Mass and are following courses of study centered around theology and catechetics. Wherever you go in the United States, you find teachers, pastoral workers, evangelists, and youth ministers who received their academic and spiritual training at the Franciscan University of Steubenville. Of course, many vocations to the priesthood and consecrated life have also resulted from the deep spiritual atmosphere of the university.

I was very proud to have received an honorary doctorate from Franciscan University last May, on the Feast of Our Lady of Fatima. Like today, it was a Friday the 13th and so I told the students, “Many people feel that Friday the 13th is an unlucky day, but for me it’s the luckiest day of my life because I’m getting a free degree from the Franciscan University of Steubenville!”

I was a great admirer of Father Scanlan. When I was bishop in the West Indies and in Fall River, we invited him to come and preach and I also participated in some of the priest retreats that he organized, particularly the international retreats in Rome that would bring together some 1,400 priests from all over the world.

He certainly was a very gifted man who used his gifts at the service of the Lord and the Church. He will be sorely missed but fondly remembered, and his ministry will continue to touch the lives of so many people.

Last Friday, I attended the installation of the new Archbishop of Newark, Cardinal Joseph Tobin. 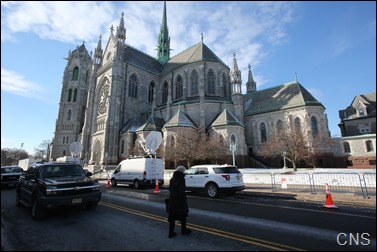 The installation took place at Newark’s Cathedral Basilica of the Sacred Heart, which I think is one of the most stunning cathedrals in the United States. The cathedral sits on a knoll, so that when you approach the city, it’s one of the first landmarks you see. 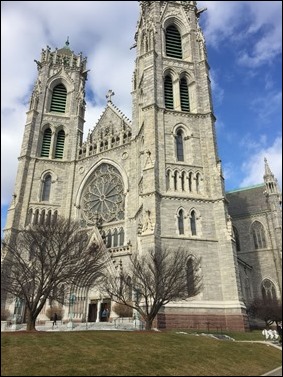 It was especially beautiful to have the celebration during the Christmas season, with the cathedral decorated with all its lights, poinsettias and Christmas trees. 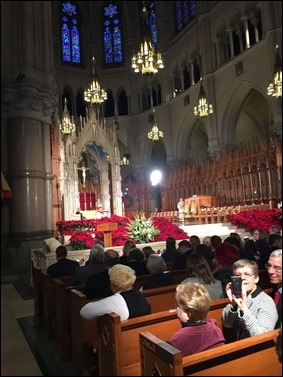 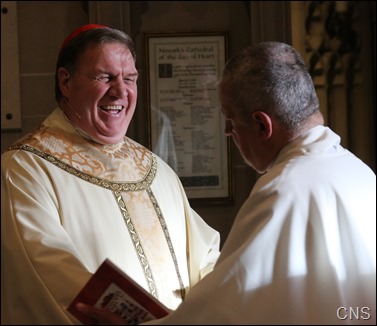 He was very warmly welcomed by the people of Newark. Archbishop John Myers was there and read the opening statement of welcome and the papal nuncio, Archbishop Christophe Pierre, read the Holy Father’s letter of appointment. 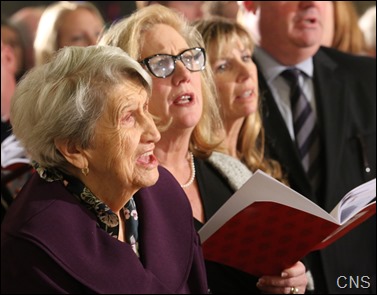 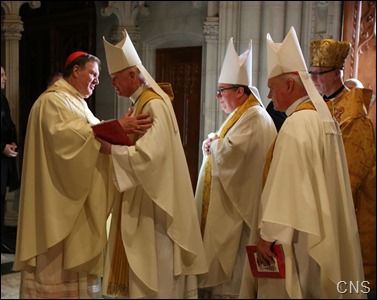 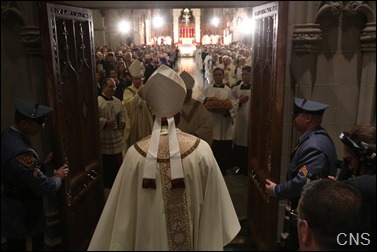 Of course, it was an inspiring liturgy and Cardinal Tobin gave a powerful reflection in his homily, in which he said the greatest problem that we face today is the distance between faith and everyday life. 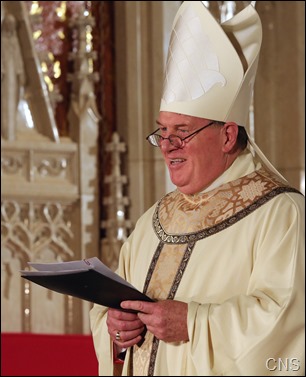 One innovation in the ceremony that I thought was quite interesting was that, instead of the chancellor showing the papal bull to the clergy, consultors and the faithful, the new archbishop did it himself. I was told that this was something that the nuncio himself had suggested.

I thought it was a very nice touch, because that is such an important part of the installation ceremony, and by having the new archbishop do it himself, it draws more attention to the significance of the moment. 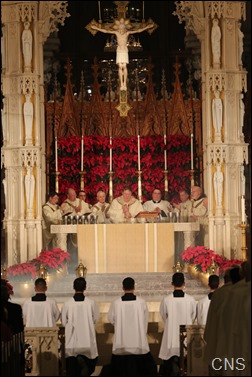 Following the installation, I went to Washington to attend a conference at the Catholic University of America entitled, “Erroneous Autonomy: The Dignity of Work.” 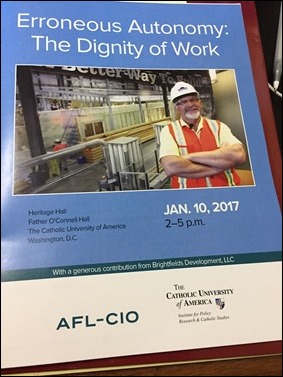 John Garvey, the president of the University, was there with us, along with many other speakers, including Richard Trumka, the head of the AFL-CIO who is a Catholic from the Pittsburgh, Pennsylvania area. 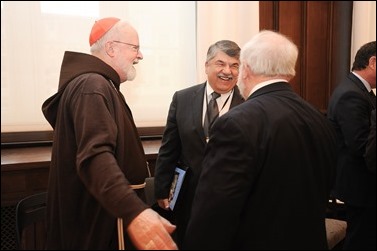 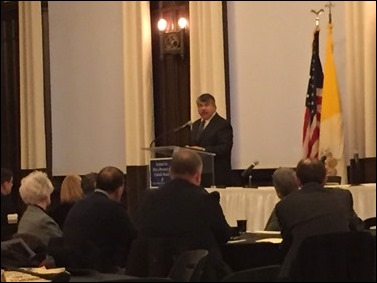 I was very happy to be invited to give some reflections in the dignity of work and spoke a bit about my ministry in Washington, which involved working with exploited workers, particularly domestic workers serving the diplomatic community who were taken advantage of. 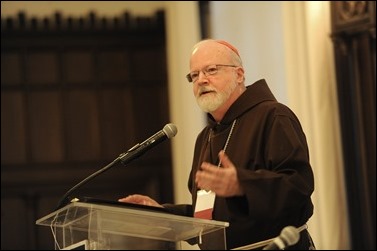 I also remarked on the Labor Guild we have here in the Archdiocese of Boston, which just celebrated their 50th anniversary and still does so much good, sharing with both the labor and management communities the Church’s social gospel on the rights and dignity of workers.

While I was in Washington I was invited to visit the new Museum of the Bible, which is scheduled to open in November. It will be the third largest museum — and the largest privately owned museum — in Washington, D.C. 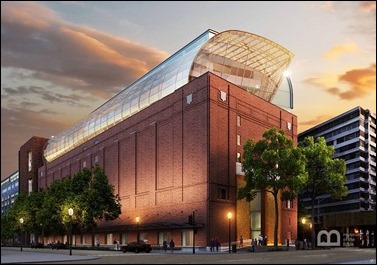 There has been a very great effort to invite Protestants, Catholics and Jews to work together on this project, and the Holy See is being offered space to exhibit items from the Vatican Library and the Vatican Museums.

In this picture, you can see just how close the new museum is to the Capitol. It’s just two blocks from the Smithsonian Air and Space Museum and the National Mall. 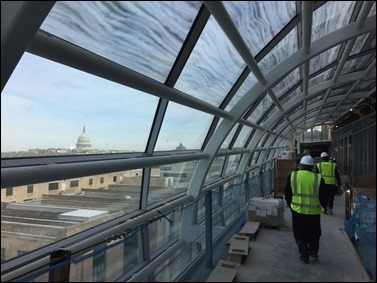 The museum expects to host up to 5 million visitors in its first year. Hopefully, in the future, when our young people from Boston come to Washington for the March for Life, we will be able to take them to visit the museum at the St. John Paul II National Shrine and this wonderful new Museum of the Bible.

On Tuesday I returned to Boston, and that afternoon I was visited at the cathedral by a group of over 30 sisters from Latin America accompanied by Father Jack Wall, the president of Catholic Extension. 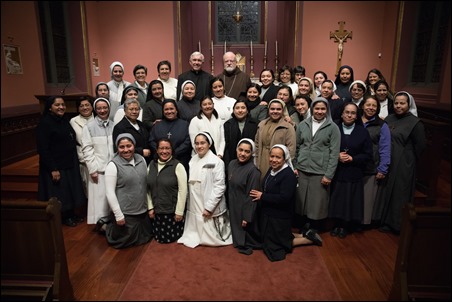 These sisters are all missionaries from Latin American mission dioceses who have been sponsored by Catholic Extension and the Conrad Hilton Foundation to come for five years to the U.S. to serve poor, Hispanic immigrant communities in a number of dioceses.

This was their first time in Boston and they were here to take a week-long course on operational leadership at Boston College.

Part of Catholic Extension’s goal is to give the sisters opportunities to advance their education while they are here, so they gather 2 or 3 times a year to take courses or do retreats. Since many them do not have a university-level education, they can use the credits they earn here toward a future degree at home. 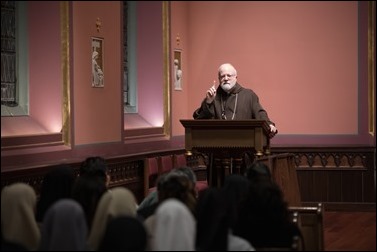 During our visit, I gave a brief talk to the sisters, in which I offered some thoughts on Hispanic ministry, and afterward the sisters sang us some songs.

I was so glad to see that BC invited the Sisters to center court for the singing of the National Anthem during one of their basketball games. It must have been a wonderful witness to all the BC fans to see all these women religious in their habits and BC t-shirts! 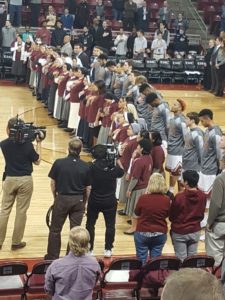 Finally, last night I was very happy to be joined for dinner at the cathedral by Supreme Knight Carl Anderson and his wife, Dorian. 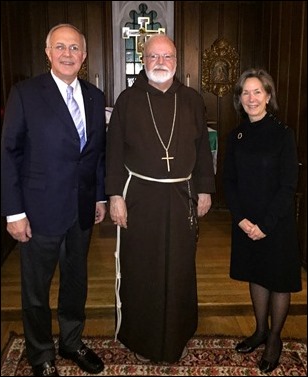 We are so grateful to the Knights of Columbus for their outstanding work in so many different areas of the life of the Catholic Church. Our local Knights are so supportive of their pastors and of the archdiocese in our mission of evangelization, support of family life and vocations. So, I was very pleased to be able to spend an evening with Carl and Dorian here at the Cathedral the Holy Cross.