With our Boston Youth in Kraków for World Youth Day

We are spending this week in Kraków participating in World Youth Day events and are eagerly awaiting the main events with the Holy Father which will take place mostly on Saturday and Sunday.

We arrived Sunday night, and Monday we celebrated Mass at the Divine Mercy Sanctuary, the resting place of St. Faustina Kowalska. 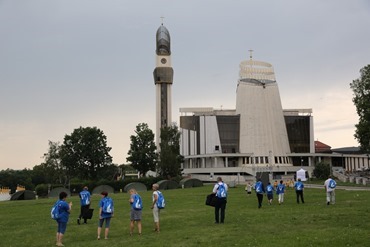 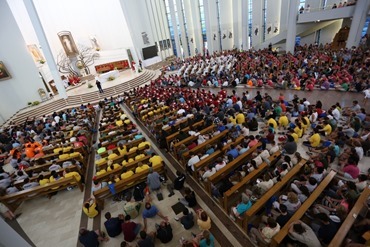 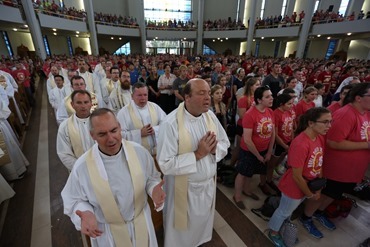 It was the Feast of St. James, and the organization had invited the English speaking pilgrims to that Mass. The Boston group was there, plus about 4,000 other youngsters. 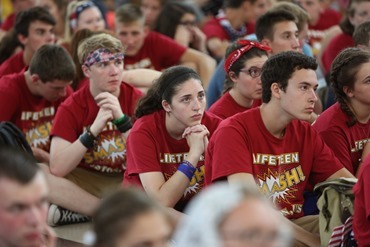 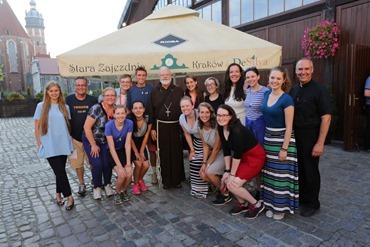 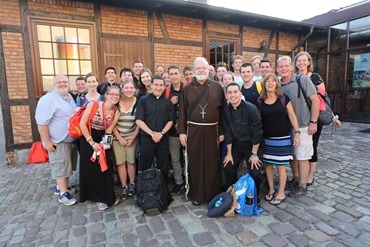 It was a beautiful celebration, and afterwards we had a meal with all of the pilgrims from Boston. 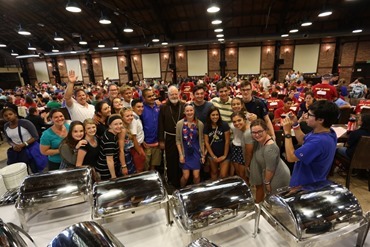 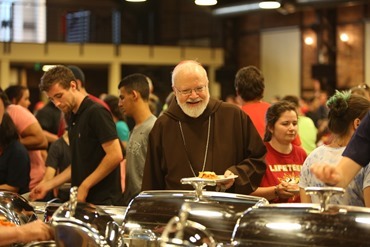 On Tuesday, I had lunch at the Capuchin monastery in Kraków. 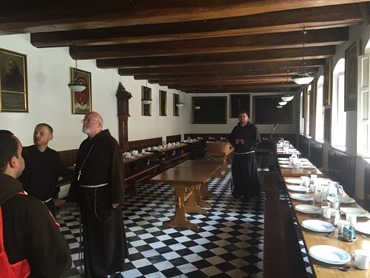 A number of our friars from the States were staying there, including Brother Will Terraza, who’s working with us at the Cathedral of the Holy Cross in Boston. It was wonderful to visit the local Capuchins. 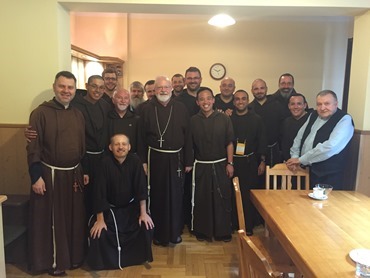 They run a homeless shelter, and they’re right in the center of town in a wonderful, historic  monastery. It was a joy to be with them.

Then, Wednesday, Thursday and Friday I gave three catechesis to the pilgrims at three different locations.

Wednesday’s was in the “Mercy Center,” an indoor stadium that the Knights of Columbus had arranged to be available for English speaking pilgrims. 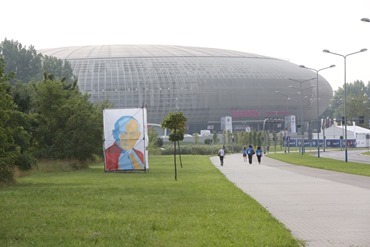 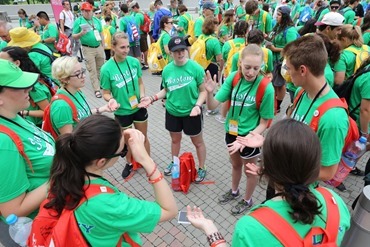 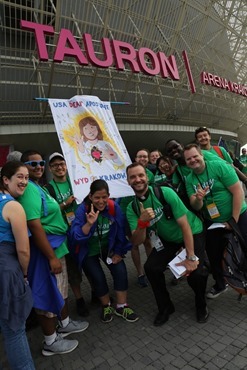 Every World Youth Day the Knights of Columbus arrange a wonderful spot to bring together the English speaking pilgrims, but this was the most extraordinary. The stadium is brand new, and it has all the facilities, and it’s just an extraordinary place to have the catechesis. 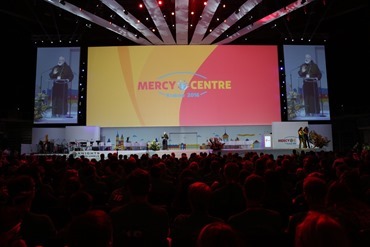 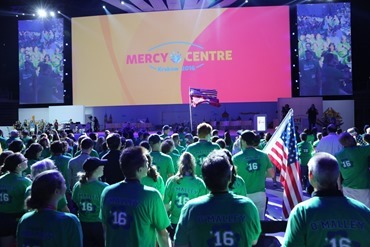 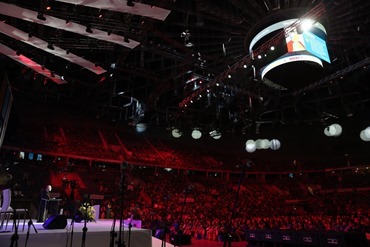 About 20,000 English speaking youth attended the catechesis. Someone asked me if that was the largest group I’ve ever spoken to, but actually, I told them that in Fatima I had a Mass for about 300,000 people! 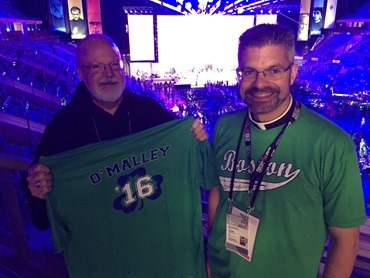 The Boston pilgrims were wearing these stylish t-shirts

I gave the catechesis, as many other bishops did in other places around Kraków, on the World Youth Day theme this year, “Blessed are the merciful, for they shall obtain mercy.”

After the catechesis, we had questions and answers. The young people asked questions about vocations and about freedom, and then there were some witness talks.

The morning ended with a Eucharist that I celebrated and preached at, and many bishops and priest concelebrated. 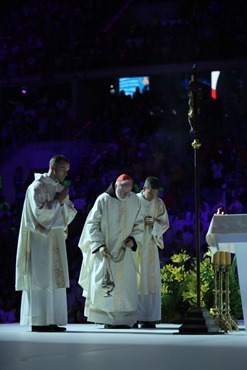 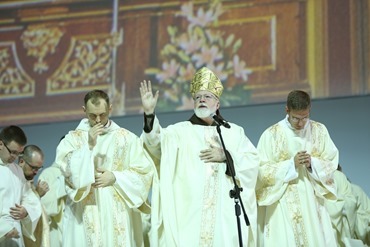 Thursday, Cardinal Tagle was at the Mercy Center and on Friday, Cardinal Dolan was the keynote speaker there.

The next day I gave the catechesis and Mass in a parish, also named for the Divine Mercy, and it was a more eclectic group. We had not only English speaking youth, but also there were Belgian, French and Eastern European youth that joined us. 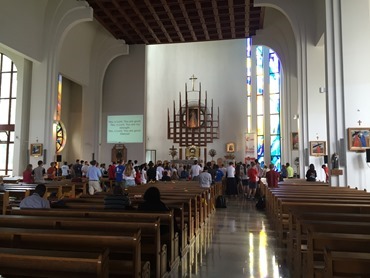 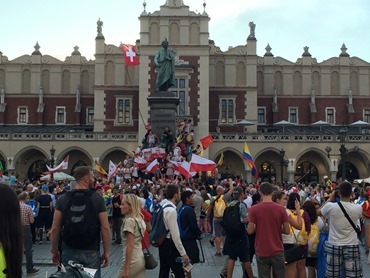 Friday I went to Wadowice, which is the city where Pope St. John Paul II was born, and we had the catechesis there. 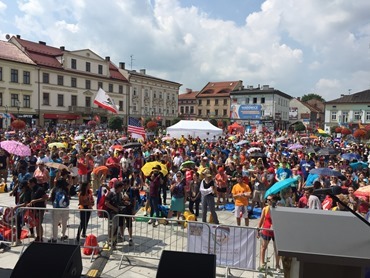 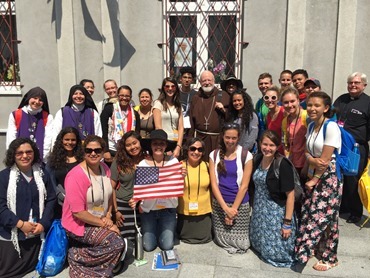 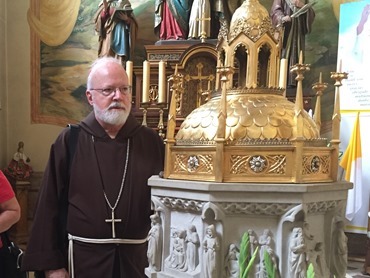 This the baptismal font where St. John Paul II was baptized
– – –

I can’t say enough about how wonderful the city of Kraków is and, in many ways, it’s an extraordinary place to have a World Youth Day.

On one hand, with the concentration camps so close, you see how much evil there is in our world, but at the same time we see the sanctity of that holiness of so many Polish saints and Polish people who suffered courageously for their faith. So, it’s a wonderful experience for our young people. There’s great enthusiasm for Pope Francis’ presence here, and we’re looking forward to the other events of the week.

The World Youth Day celebrations are a real credit to the pastoral genius of St. John Paul II, who came up with this idea. I know that many people at the beginning were very skeptical, but when you look back it’s one of the most important initiatives the Church has had for young people. And when you see that over a third of seminarians in the United States have made a World Youth Day pilgrimage, it gives you some idea on how much of an impact these World Youth Days have made on people.

Since I’ve been here, I am running into people from all over the world. 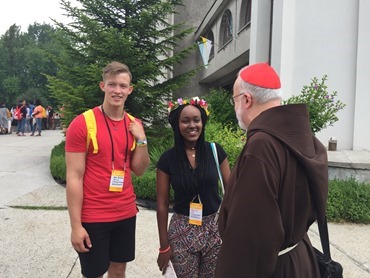 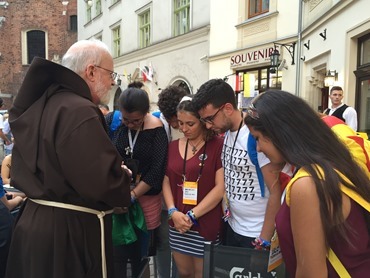 Thursday I had lunch with a Portuguese girl that I baptized 17 years ago, so that was a great joy to see that she’s not only living her baptism, but coming and being part of World Youth Day from Portugal.

We have here so many of our wonderful parish priests from Boston who are just doing a tremendous job with our young people. They’re having a great experience, and we’re so grateful for the parents and chaperones that made the sacrifice to be here to accompany our young people.

Tuesday, of course, we heard the news of a French priest who was slain while he was celebrating Mass. The priest’s death was of course on everyone’s mind here. There are many French pilgrims attending World Youth Day. In fact, the Bishop of Normandy was in Kraków with several hundred youth at the time that Father Jacques Hamel was murdered. He immediately went back to his diocese. 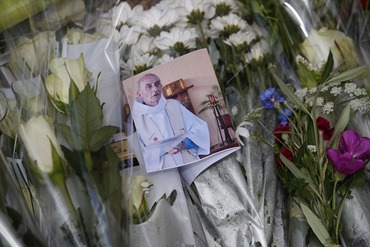 It was quite a shock that once again an act of violence was perpetrated in such a wanton way. Obviously, the people here are very disturbed, and it certainly shows the amount of unrest that exists in our world today.

My post next week will focus on the final events this weekend.