Thursday, the leadership of the Charity Federation came to see me to offer suggestions for issues that I could bring up to the Holy Father when the group of eight cardinals meets with him in October. 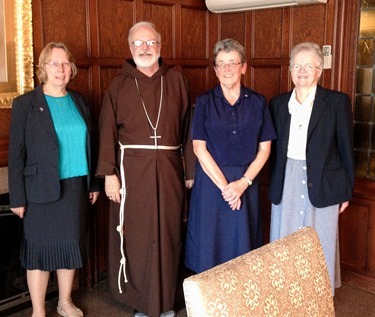 The Charity Federation was formed prior to the canonization of Mother Seton, as a loose federation of communities that trace their foundations to Mother Seton. Since that time, they have had annual meetings to discuss common issues. And at one of their recent meetings, they came up with some recommendations that they wanted to bring to me as a member of the Council that will be meeting with the Holy Father.

I have been consulting with different people, trying to generate ideas of issues that could be discussed. So, I was very happy to receive them and listen to their ideas.

Friday I had a visit from Bishop Dennis Agbenyadzi, who was accompanied by Father Chris Hickey. 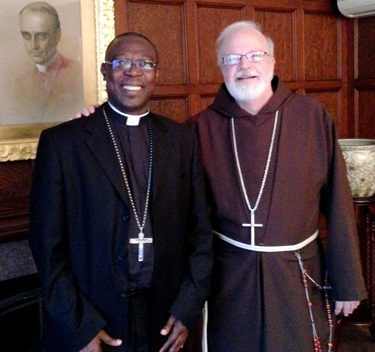 Bishop Agbenyadzi, who is originally from Ghana, had worked for long time in Father Hickey’s parish. We are very blessed to have a number of SMA (Society of African Missions) religious Fathers who help out in our parishes, particularly during their summer vacations from their graduate studies in Rome. Bishop Agbenyadzi is one of those student priests who was here for a time and now he has been made a bishop in the Central African Republic.

In fact, Father Hickey went to his episcopal ordination because when he used to help out in the parish he was always inviting Father Hickey to come to Africa and Father Hickey would say “when you are ordained a Bishop I will go.” Well, he became a bishop!

The Feast of Saint Clare is August 11 and on Saturday, the Eve of the feast, we joined the Poor Clares in Andover for their celebration. I had dinner with the sisters and then we had the transitus ceremony, which is the ceremony commemorating the death of Saint Clare, followed by a Mass. 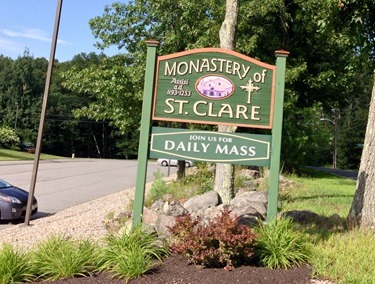 The transitus, which means “passing from one place to another”, is the commemoration of the death of a saint, of passing from this life to eternal life. During a ceremony there is a description of the last hours of the saint and recitations of the same prayers the saint would have said. 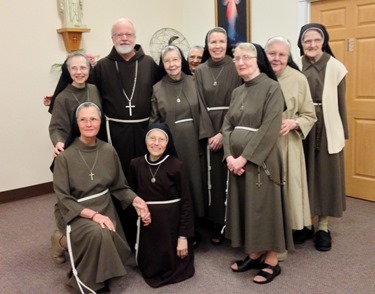 This is Sister Emily Marie and her mother, who is 100 years old and she was there with us for the transitus. 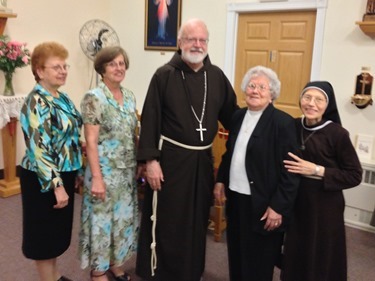 There were many lay people and third order members with us. And Barbara Keville baked a wonderful cake for us!

One of the things the sisters showed me during my visit was a huge bulletin board with all the prayer requests they have received.

I told them about my own experience as a young child going to the Poor Clares with my grandmother for the feast of the Portiuncula and how in our town, even though the sisters are cloistered and so never leave the convent, they know everything that is going on in town because everyone comes to them seeking their prayers. So, I reminded them that the presence of their community is such a blessing for us, particularly for their witness that God must be a priority in our lives and that prayer is the path that connects us with God.

Sunday, I went to Glastonbury Abbey for the blessing of the new abbot there, Abbot Thomas O’Connor, who was elected June 29. 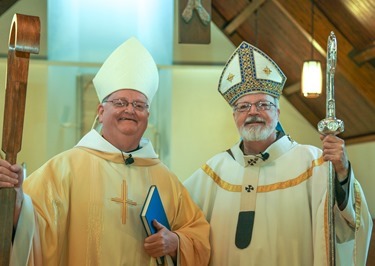 The blessing took place during an outdoor Mass on Sunday, with about 400 people in attendance. Among the guests were a number of visiting abbots, including the abbess of the Trappistine Sisters in Wrentham, Mother Maureen. 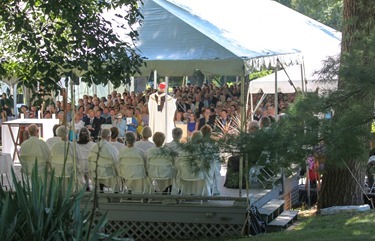 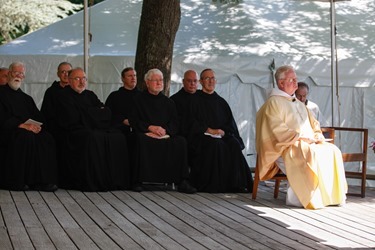 The ceremony is similar to an episcopal ordination ceremony with the singing of the Litany of the Saints and a blessing prayer followed by the bestowal of the insignia, which are the handing over of the rule of Saint Benedict, the ring, crozier and miter. An abbot, although he is not a bishop, uses episcopal insignia. 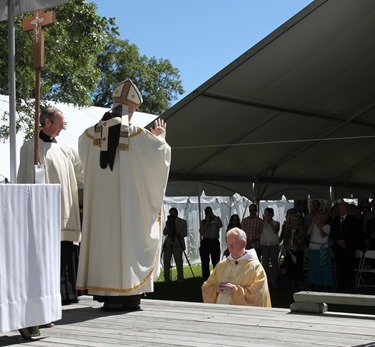 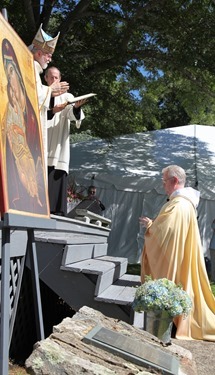 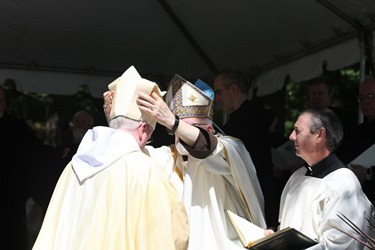 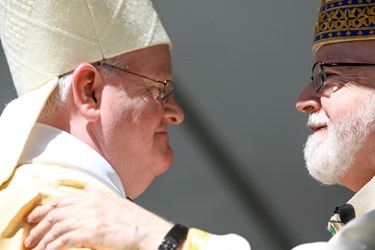 The occasion gave me the opportunity once again to speak about the importance of this monastic community in our midst, which serves as a spiritual oasis where people can go to find the time and space to grow in their interior life. 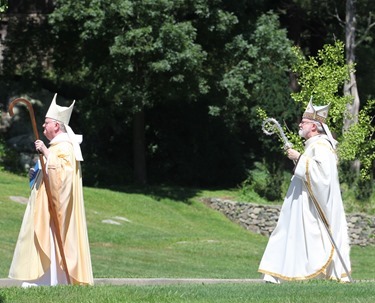 Tuesday I had lunch with friends of Andreas Widmer, Bishop Felix Gmür and Father Rudolf Heim of the Diocese of Basel, Switzerland. Father Rudolph had been auxiliary with the Swiss Guard and is now involved in recruitment efforts for the Guard.

During our talk over lunch, it was interesting to hear their accounts of what is happening with the Church in Switzerland, the challenges that they face and their impressions of the United States. They were somewhat amazed that, despite being a very prosperous and technologically advanced country, the U.S. is still in many ways also very religious country, which is not the case in much of Europe.

Then, that evening, I went to visit the Jesuit community at Holy Cross College. They have about 25 men living there. 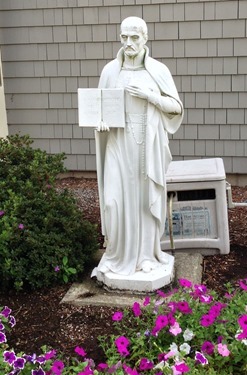 A number of the young Jesuits were with us at World Youth Day in Rio and were very helpful at the Rio Vivo Center that the Knights of Columbus sponsored for young people from the English-speaking countries.

It was also a chance to meet the new president of Holy Cross, Father Philip Boroughs who was with us, along with Father Paul Harman and Father John Savard.

During the evening we had Vespers and then I gave a short talk on the Holy Father followed by a time of questions and answers.

We concluded our day with a dinner, at which they presented me with this T-shirt which says we love our Jesuit pope! 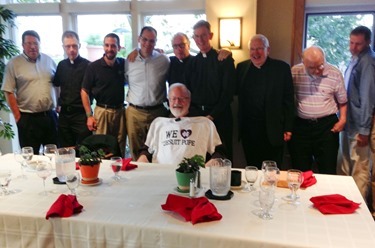 Wednesday, we had a Mass and a reception to bid farewell and express our gratitude to Mary Grassa O’Neill, who for five years has done an extraordinary job as our superintendent of schools and Secretary for education. In that time, she has been able to achieve great advances in our school system. 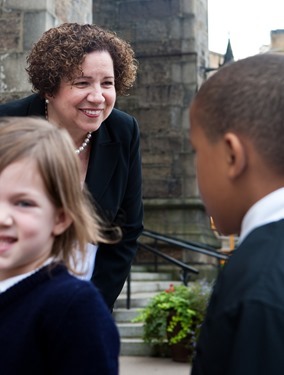 In addition her presence has attracted great financial support for our school system and attracted a lot of talented people who, inspired by her presence here, have wanted to become part of our Catholic education effort by coming to work as staff or volunteers, or to help out in other capacities. 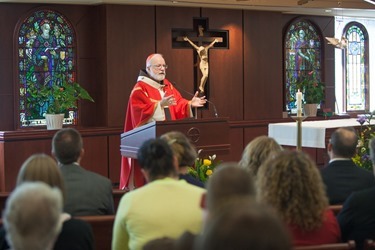 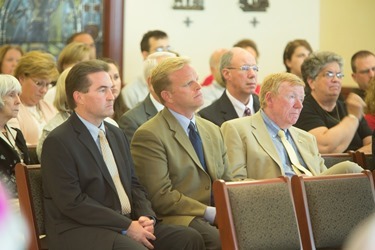 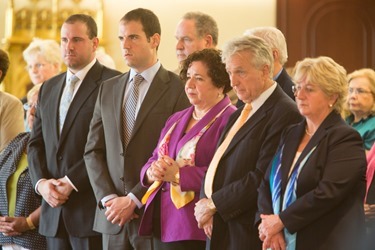 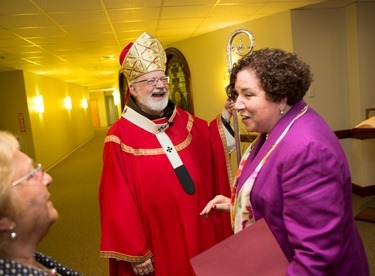 Her presence has made a very dramatic difference in our school system and we are very grateful for all that she has achieved. At the time we brought her onboard, no one wanted the job because it was so challenging. But she was willing to leave a very prestigious post at Harvard to work to take on that challenge, and the results have been tremendous. 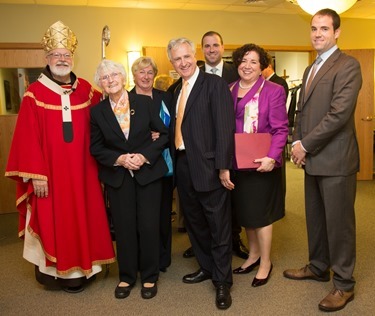 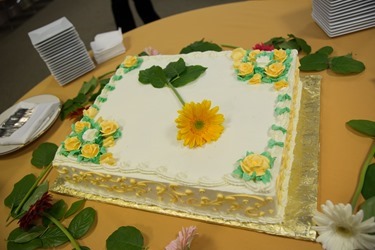 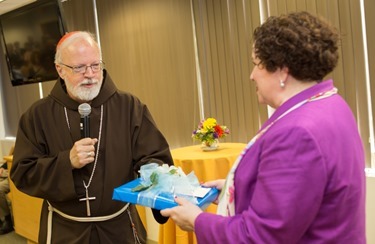 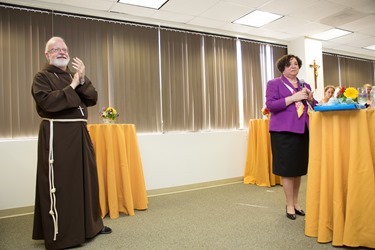 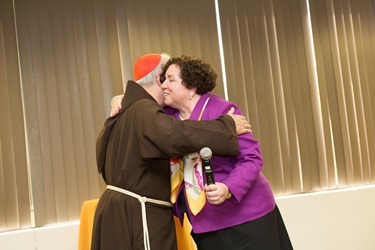 Wednesday evening, I had dinner with Emilio and Maria Biosca and several of their cousins who were here in Boston on vacation. The Bioscas were very involved with me at the Centro Catolico Hispano. Their daughter is a Poor Clare Sister and their son is a Capuchin priest in Cuba.

We had a lovely evening together, reminiscing about the activities of the Centro Catolico. They used to help with the dental clinic, the radio program and many of the other activities that we carried out with so many members of the Agrupación Católica Universitaria.

Thursday morning I met with Professor Charles Camosy and a group of young theologians who were meeting in Boston this week. 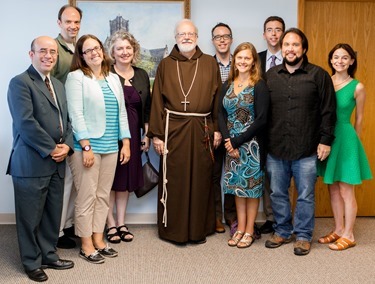 The theologians met for several days as part of the "Catholic Conversation Project", which provides opportunities for theological faculty and students from throughout the U. S. to meet and share their work. Hossfman Ospino, a professor of Hispanic Ministry and Religious Education at the Boston College School of Theology and Ministry, has helped to facilitate the Conversation Project and also been great help to our efforts for outreach to the Hispanic Catholic community.

A particular focus of the young theologians is how to be more helpful to and supportive of the Catholic bishops, I encouraged them to be attentive to that opportunity and thanked them for their efforts.

And, of course, yesterday we celebrated the Feast of the Assumption of the Blessed Virgin Mary. 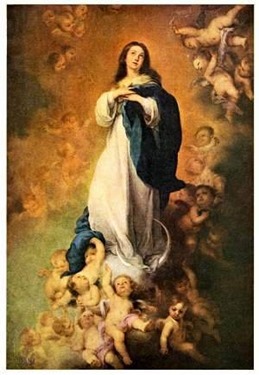 I was very happy to be able to celebrate the Mass here at the Pastoral Center. 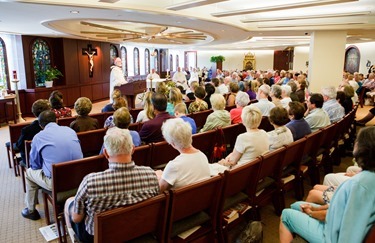 The Assumption is one of the very important mysteries of faith and is therefore a Holy Day of Obligation for Catholics. 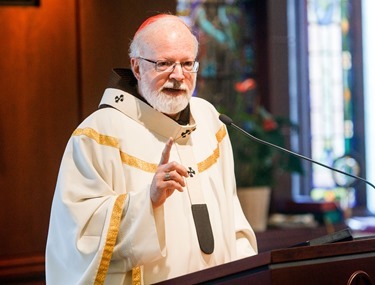 On that day, we commemorate Mary’s Assumption into heaven as a consequence of her being full of grace, her Immaculate Conception and her participation in the life of the resurrection that Christ is calling all of us to if we lead lives of faithful discipleship in imitation of Mary, the first disciple.