I want to begin this week noting the decisions on the definition of marriage handed down this week by the Supreme Court are certainly very disappointing.

The only positive aspect of the decisions is that the right of the states to legislate on marriage has not been taken away by the Supreme Court, which was a danger. Had that happened, it would have been another Roe versus Wade type of decision.

Still, these two decisions together weaken traditional marriage. The Church’s position is to defend traditional marriage as the sanctuary of life and the ideal forum for begetting, nurturing and educating children. For us, it is a matter of the rights of children not being respected. Marriage is being made into a matter of relationships between adults. This is not what marriage is about.

Unfortunately, this has become a very emotional issue. Some people, rather than truly wanting to weigh the issues that are at stake, simply see any opposition to marriage between people of the same sex as homophobic, unjust or intolerant.

Marriage in our society is the linchpin that is at the very basis of the community. No-fault divorce, cohabitation and the redefinition of marriage are not making the institution of marriage safer or stronger. The more the marriage is weakened, the more society suffers the consequences.

In reaction to the Supreme Court’s decision, the bishops of Massachusetts have issued the following statement:

The Catholic Church teaches that marriage is a sacred bond between a man and a woman and a gift to children and society. Today, more than ever, the institution of marriage needs to be strengthened, not redefined as twelve states (including Massachusetts)and the District of Columbia have done.

This morning, in a 5-4 decision, the Supreme Court has ruled that the Defense of Marriage Act, (DOMA) which defines marriage as between one man and one woman, is unconstitutional. The Court based that decision primarily on the principle that DOMA deprives equal protection under the Fifth Amendment to those citizens lawfully married in those thirteen jurisdictions. The Court did not hold that the Constitution requires marriage redefinition in those states that do not recognize same sex marriage.

The Bishops of Massachusetts are extremely disappointed that the Court has struck down DOMA. The Church continues to stand for the traditional definition of marriage, an institution which unites one man and one woman with any children who may come from that union. Marriage, as a natural institution, predates both religion and government and is grounded in the nature of the human person. Protecting the traditional definition of marriage affirms the basic rights and dignity of women and men while safeguarding the basic rights of children.

Now, on to the events of my week…

Last Thursday and Friday Boston College, with the support of the U.S. Conference of Catholic Bishops and the Knights of Columbus, hosted a “Summit on Vocations” that brought together bishops, seminary personnel and vocation directors from dioceses and religious orders throughout the country.

There were a number of talks and panel discussions centered on an analysis of the study that CARA has conducted on vocations in United States.

Boston College president Father William Leahy gave an exceptionally interesting address on the first day of the summit on the strategies necessary for promoting vocations.

I celebrated the closing Mass which was on the feast of Saint Aloysius Gonzaga. In preparing for the feast, I discovered that Saint Aloysius had wanted to become a Capuchin – but fell under the spell of the Jesuits!

On Saturday I met with our vocations director, Father Dan Hennessey, and with area high school and college students who are members of the new Blessed John Paul II Society. The Society was established this year when the students asked Father Hennessey to assist them in gathering on a regular basis for vocational discernment and for social activities and fraternity during that process. 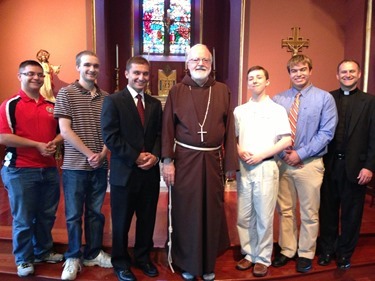 We are very happy that one of the members will be entering the college seminary program at Our Lady of Providence this coming September. The Society is open to young men who are juniors and seniors in high school or freshmen and sophomores in college. For more information about the group and its activities please contact Father Hennessey through the Archdiocesan vocations website, www.vocationsboston.org or you can download a PDF brochure here.

We also held Cathedral Family Day on Saturday. It is a wonderful day. They have a Mass followed by Festival where they sell food, have a yard sale, etc. 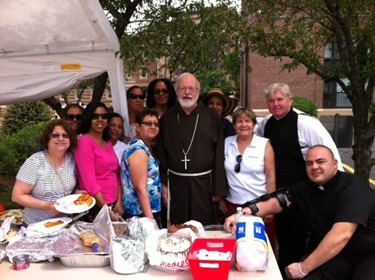 It was a beautiful day for it, and not as hot as last year, so they had a good turnout.

Later that day Jim Towey, the new president of Ave Maria University, came for a visit. 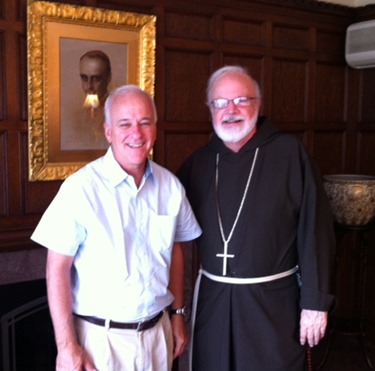 He wanted to share with me his plans to start a special Institute in honor of Mother Teresa. He worked personally with Mother Teresa in India for a number of years as her lawyer and has been very close to the Missionaries of Charity all along. 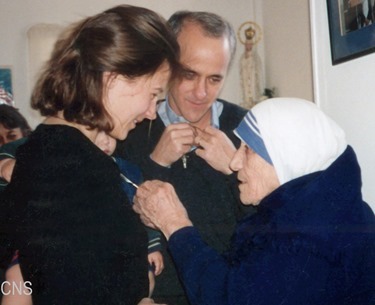 Jim and his wife, Mary with Mother Teresa in 1994

He is thinking of the future – that it would be important for people to have an archive with artifacts and writings of Mother Teresa that would provide a place to study her spirituality as well as promote devotion to her.

Tom Monahan has said that Ave Maria will be the “Notre Dame of the South” and they have made a lot of progress toward that goal in the last couple of years. 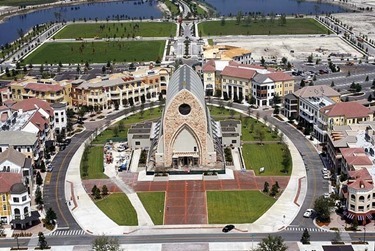 On Sunday, I went to St. Mary’s in Lynn to join in the celebration of their 150th anniversary. 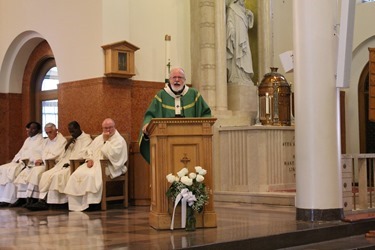 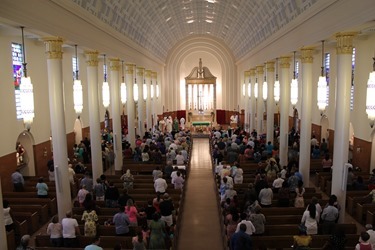 The Mass was bilingual, English and French, because of the Congolese and Haitian community there. 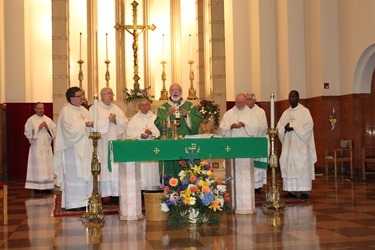 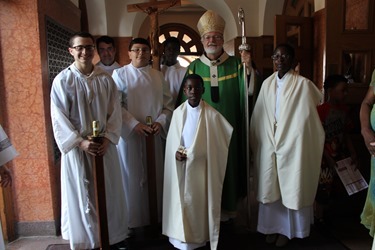 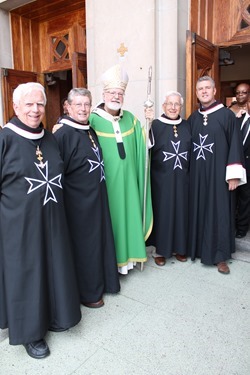 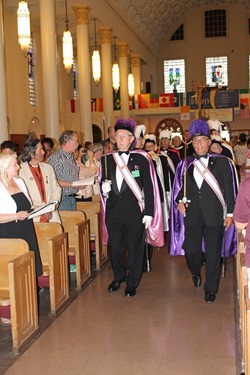 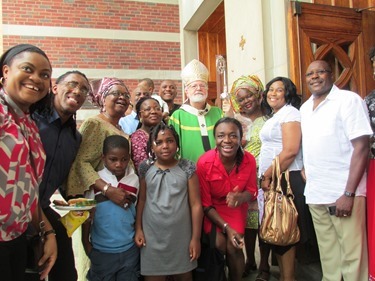 In addition to the present pastor Father Flynn, who is doing a wonderful job, we were joined former pastors Father John Leonard and Msgr. Paul Garrity. 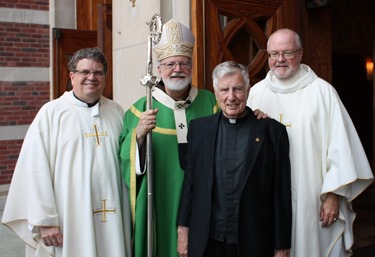 On Monday, I paid a visit to the National Guard unit at Hanscom Air Force Base. Rabbi Larry Bazer, who is a chaplain there, invited me to take a tour of the base.

For a long time, I have wanted to have a priest chaplain in the National Guard and we have a couple of chaplains in training for them.

They spoke to us about the history of the Massachusetts National Guard.

One thing I found interesting is that the Massachusetts National Guard has a partnership with the nation of Paraguay. They do a lot of important work for the people Paraguay such as arranging for medical and dental help. So, I put them in touch with my friend Bishop Martinez in Paraguay.

Later that day I met with Henry Cappello of Caritas in Veritate International.

It is a very impressive program. They train volunteers to work in Third World countries and give them spiritual foundation that they need to connect our faith with action.

Caritas in Veritate has done extraordinary work particularly in China. Thousands of volunteers have gone to the spiritual training for works of mercy and other development projects that they perform.

Tuesday I was visited by Vince Ambrosetti. 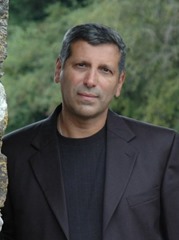 He came to visit me and to talk about his new hymnal. He gave me composition that he did based on the Holy Father’s motto “Miserando Atque Eligendo”, (“Because he saw him through the eyes of mercy and chose him”) which is a phrase based on the commentary by the Venerable Bede for the feast of St. Matthew. He composed this musical number and asked me to pass it along to the Pope, so I told him I would.

Finally, on Tuesday I had the opportunity to visit Franciscan Hospital for Children in Brighton, to meet Korey Foley, a student in the Kennedy Day School there. 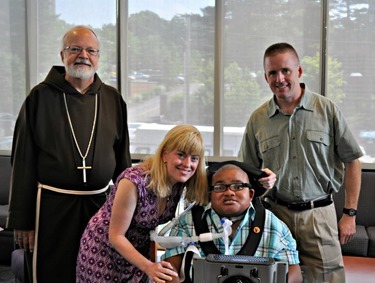 Korey with his parents

Their love for and dedication to Korey is a powerful witness to the truth that every person is created in the image and likeness of God and is deserving of our care and concern. Korey is a very happy young man who communicates by way of a computer that “speaks” in response to touchscreen input. 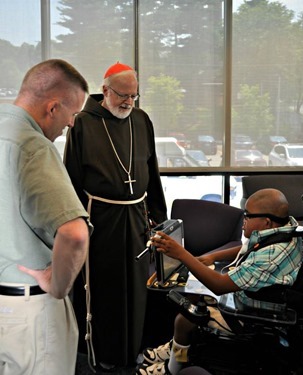 Korey very much enjoys the program at the Kennedy Day School but is looking forward to some vacation time this summer.

We are very grateful to Mr. John Nash, President of the Franciscan Hospital for Children, and all the staff there for the extraordinary care they provide the patients at the hospital and students at the school. 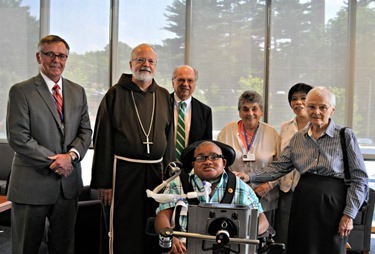 In addition to photos of my visit, I want to share a video with you that shares the story of Korey’s family life, I hope that you find it as inspiring as I do.