Friday, I attended the wake of Judge Joseph Nolan, a retired justice of the Massachusetts Supreme Judicial Court, at St. Joseph’s Church in Belmont.

He was the long-time president of the Catholic Lawyers Guild of the Archdiocese of Boston and throughout his life he has been very active in many Church activities. 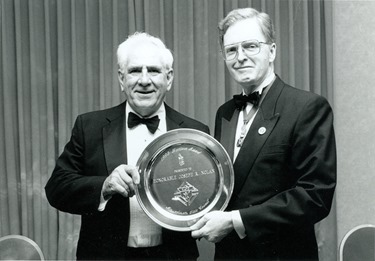 Judge Nolan receiving the Knights of Columbus’ Lantern Award in 1993

Saturday I went to St. Catherine of Siena Parish in Norwood to celebrate confirmations. It was a very large confirmation class, in two groups.

One of the first confirmations I ever did in Boston was almost 30 years ago at St. Catherine’s, when I was still Bishop of the West Indies. They still have very large religious education classes and a wonderful Catholic school. It was a delight to be able to celebrate confirmations there.

Msgr. Garrity is now the pastor there and he is assisted by the retired pastor, Msgr. Paul Ryan, and they make a great team. Father Tony Luongo is also assigned there, however, he was unable to be at the confirmations because his mother’s funeral also took place on Saturday morning and at the confirmation Masses we offered prayers for him. 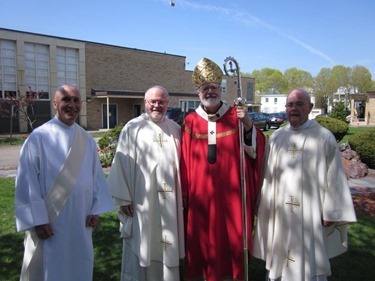 Msgr. Garrity, who did such an extraordinary job at St. Mary’s in Lynn, is very focused on promoting Catholic education in Norwood and we are very grateful that it is one of our larger schools, a very important center for Catholic education.

Saturday afternoon I made hospital visits. I went to see Father Brian Smith who has been diagnosed with cancer and is in the cancer unit at Dana-Farber.

We also went to visit Jane Richard, the younger sister of Martin Richard, the 8-year-old who was killed in the Marathon Bombings. She survived the bombings, but lost a foot and was severely burned. It was very impressive to see how wonderful the doctors and nurses were with her and her family.

Her parents and uncle were there with her. I was accompanied by Father Sean Connor, their pastor, who has been working very closely with the family and providing pastoral support. We are very grateful for all that he has done.

Saturday, I went to St. Benedict’s in Somerville to celebrate their Spanish Mass. 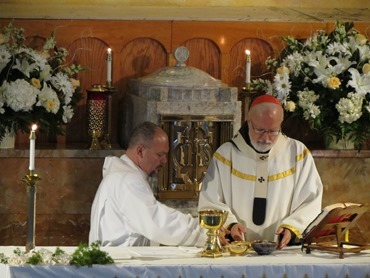 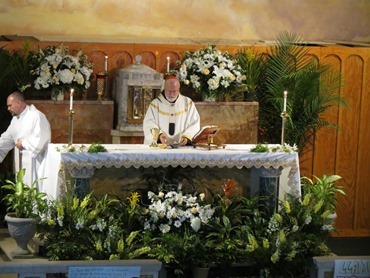 Father Oscar Martín is the pastor there and he is doing an excellent job. 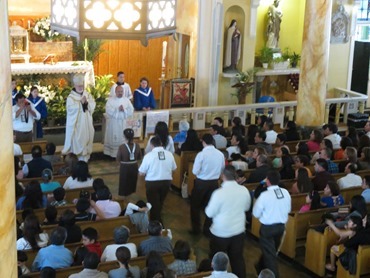 It was very encouraging to see how vibrant the parish is, with such great enthusiasm and many young people. 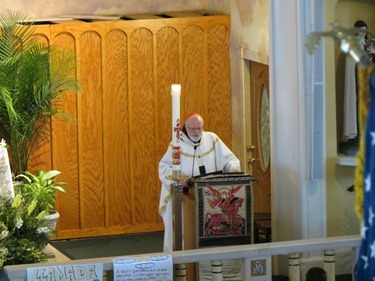 During the Mass we welcomed a new priest, Father Adriano Albino de Castro, who is from the Archdiocese of Brasilia in Brazil and has just arrived. He will be working with the Portuguese speaking community in the archdiocese. 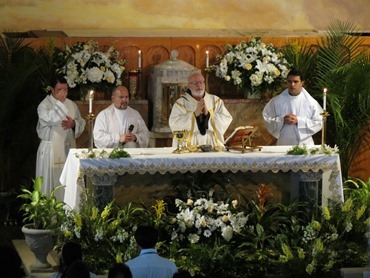 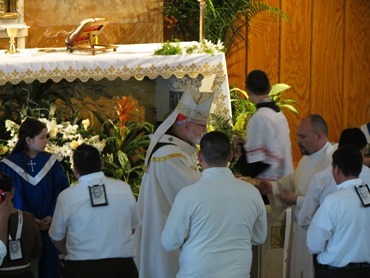 From Somerville, I went immediately to the Cathedral to join the Catechetical Leadership Awards Vespers Service that was being led by Bishop Deeley. I was able to address them and thank them for the important work they do for the archdiocese. 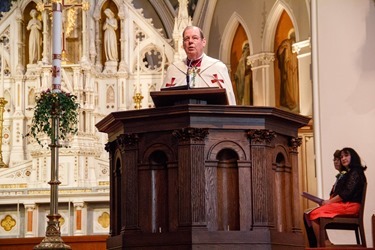 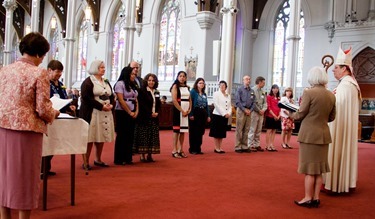 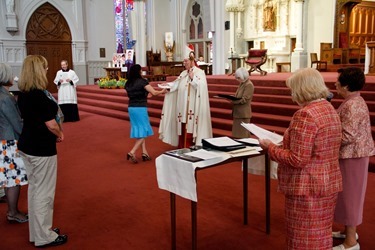 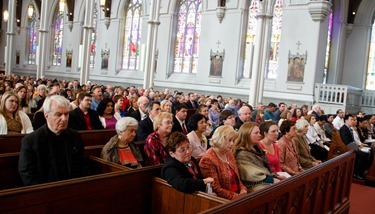 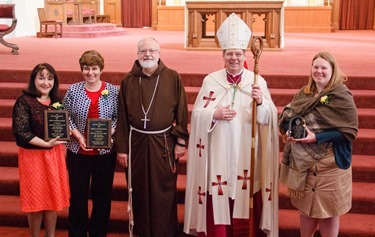 Also, 75 catechists were recognized for their faithful service. 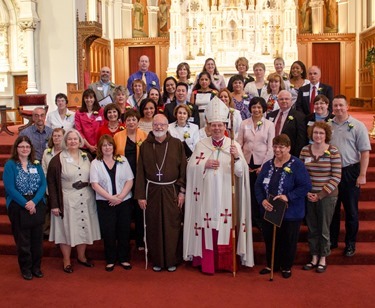 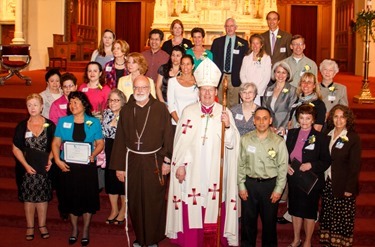 We are so grateful to Susan Abbott, Susan Kay, and Janet Benestad who organized this event to recognize our catechists.

Monday, I visited the Boston Pre-Release Center in Roslindale, which is run by the Mass. Department of Corrections. I celebrated Mass for them and we had two confirmations.

I had not been to that particular institution before, but I was very impressed by how clean and well run it is. The men there work in the community at various jobs. The center provides a kind of transition, preparing them for when they are released from prison so they have job skills and a little money.

I told them that I was so happy to see that they have this kind of program. I said that when I was a prison chaplain 40 years ago, this type of program did not exist, at least where I was. There, the men were kept in prison and could not get parole unless they had a job, but no one would hire them sight unseen. As a result, hardly any of them were paroled.

To solve this problem, I had the brilliant idea to start a painting company to hire the men and get them at a prison— but I knew nothing about painting companies! I got some money from my father, and bought all the equipment that I thought we would need. Then it occurred to me that we would need a vehicle, but I had already spent most all the money I had on supplies.

It turned out that the only vehicle I could buy with the money that we had left was an old red station wagon that only went in reverse. So, we got to our first job driving in reverse the whole way! Thankfully, once we painted our first house, we had the money to get the car repaired.

So I told them I was glad that they had a prerelease program such as this because running a painting company is such a challenge!

On Wednesday I attended the Catholic Charities reception for the Labouré Center where Bob Sheridan was honored. He is the former president of SBLI and is very generous in supporting many causes including several Catholic organizations such as Labouré Center. 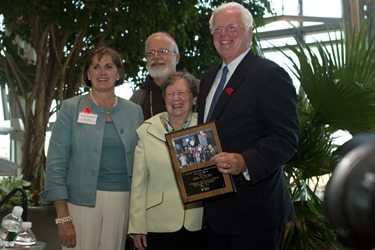 It was a wonderful event in a lovely venue. 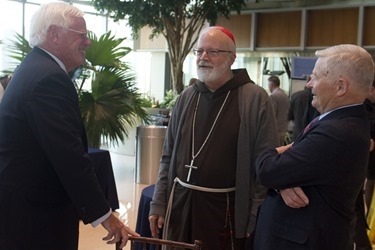 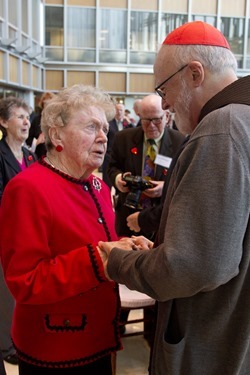 They do wonderful work at the Labouré Center. A whole panoply of activities are carried on there, providing services for families, children and new immigrants.

Thursday, I was happy to host our annual gathering of the superiors of men’s religious orders in the archdiocese here at the Pastoral Center.

There were presentations by Father Paul Soper and Sister Pat Boyle from the Pastoral Planning Office. 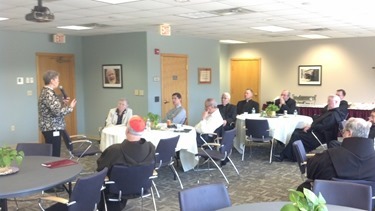 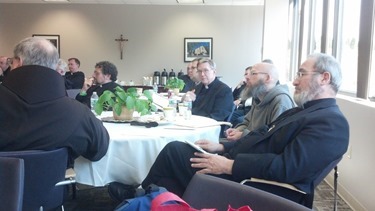 As we did with the women religious superiors last week, we spoke to them about the pastoral planning process and evangelization efforts, and asked for their input and ideas.

Then, later in the afternoon, I was very happy to be visited by Rep. Chris Smith of New Jersey and his wife, Marie, who are very active in the pro-life movement both in the United States and internationally. 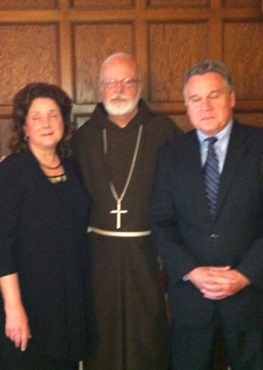 They came to speak with me about some of their ideas and proposals for the pro-life movement. It is always a pleasure to see them.