I have been attending the “Ecclesia in America” conference in Rome, which addresses the history and future of the Church in America. The conference runs from December 9 to 12, concluding with an audience with Pope Benedict XVI.

I wanted to share with you a message regarding the Feast of Our Lady of Guadalupe and my hope that all Catholics will embrace the celebration of this important feast day in the life of our Church. 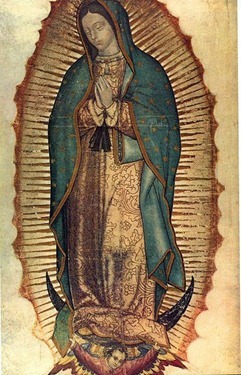 12-12-12 is an interesting date, as it represents the last time in this century that the month, day and year will all match. But December 12 for Catholics, during this Year of Faith, is also a very important day.

First, the Holy Father, Pope Benedict XVI (@pontifex), begins his tweeting ministry, symbolizing in a new way the Church’s embrace of technology and tools of communication as a way to share the eternal and saving Truth of the Good News of Jesus Christ.

The other reason for the day’s importance, and one of the factors in Pope Benedict’s choosing of this day to launch his newest communication initiative, is that it is the Feast of Our Lady of Guadalupe, who we revere as the Mother of the New Evangelization and the Patroness of all the Americas (North, South and Central). After Our Lady of Guadalupe appeared to St. Juan Diego 481 years ago, one of the most rapid periods of evangelization in the history of the Church began.

During this Year of Faith, I ask all Catholics to study the message of Our Lady of Guadalupe to St. Juan Diego. Our Catholic brothers and sisters from Mexico and in Central and South American countries are devoted to her motherly care, but many Catholics raised in the United States are not as aware of what happened in December of 1531 as I hope they soon will be. Now is a great time for this connection with Our Lady of Guadalupe to be established, renewed or deepened. We can begin by attending Mass and praying a family Rosary on December 12.

God has often called unlikely people to great missions. It was true with St. Peter, many of the saints, and for St. Juan Diego. This is a great lesson for all of us as we are all called to do our part in the New Evangelization.

When the Blessed Mother appeared to Juan Diego on Tepeyac Hill, he was a simple, humble, 57-year-old widower known for walking with his head down and shuffling his feet. He was an Aztec Indian who had been baptized only seven years before by the Franciscan missionaries. Every Saturday and Sunday he would walk 15 miles each way to Mass. As he was journeying one cold Saturday morning, he heard a voice calling from the top of a hill, “Juanito,” “Dieguito,” “Come here!” He scaled the rocky slope, where at the top he saw the Blessed Virgin Mary arrayed in splendor.

Our Lady announced she was on a mission of mercy and wanted him to be her messenger to the bishop of Mexico City to ask him to build a church on Tepeyac Hill. Obeying simply and immediately, Juan Diego headed in his simple peasant’s outfit to the bishop’s residence, where he was forced to wait for hours in an outdoor courtyard. Eventually the bishop received him, treated him with kindness, but was skeptical regarding the message. Juan Diego left feeling like a complete failure.

Returning to Our Lady on Tepeyac Hill, he said that he had struck out. “I beg you, Noble Lady,” he implored, “to entrust this message to someone of importance, someone well-known and respected, so that your wish will be accomplished. For I am only a lowly peasant and you, my Lady, have sent me to a place where I have no standing. Forgive me if I have disappointed you for having failed in my mission.”

The Virgin smiled tenderly on him and said, “Listen to me, my dearest son, and understand that I have many servants and messengers whom I could charge with the delivery of my message. But it is altogether necessary that you should be the one to undertake this mission and that it be through your mediation and assistance that my wish should be accomplished. I urge you to go to the Bishop again tomorrow. Tell him in my name and make him fully understand my disposition, that he should undertake the erection of the teocalli (temple) for which I ask. And repeat to him that it is I in person, the ever Virgin Mary, the Mother of God, who send you.”

With trepidation, Juan Diego went again. The bishop’s overprotective staff greeted him with exasperation. He was told the bishop was busy with more important matters. He told them he was willing to wait — and did, for several hours in the frigid outdoor courtyard. When he finally met the bishop again, he repeated, with fervor and tears, the message of Our Lady entrusted to him. The bishop asked some questions. Though moved by Juan Diego’s sincerity, he wasn’t going to build a church in a desolate spot on the basis of one native’s unsubstantiated word. To test the message, the bishop asked him for a special secret sign from Our Lady. Juan Diego left at once to ask for the sign.

Arriving back at Tepeyac, the Virgin told him to return the following day to receive the sign to bring the bishop. That sign turned out to be Castillian roses, which had not yet been introduced to Mexico, growing on the top of a stony hill in frigid December temperatures. Juan Diego was instructed to bring them back to the bishop in his tilma (a tilma is a cloak or apron). When he returned to the bishop, as he opened up his tilma, the bishop saw the roses from his native Castille, the sign he was seeking. He and everyone else also saw something even more miraculous: some of the roses had melted into the tilma and produced the miraculous image of Our Lady of Guadalupe: our Lady, dressed like a pregnant Aztec princess, was giving witness that she was ready to give birth to Christ among the Mexican people and on our continent. The bishop immediately fell to his knees, and came to believe in Juan Diego’s message. A church was built on the spot of the apparition, as Mary had requested.

Until that moment, there had been relatively few conversions among the Mexican people, who associated Christianity more with the conquistadors than the Franciscans. But in the decade after the appearance of the Blessed Mother as one of them, over ten million Mexicans were baptized.

Juan Diego’s tilma has been the subject of much research. The tilma, woven out of coarse cactus and vegetable fibers, should have disintegrated after 20 years, but although nearly 500 years have passed the tilma is still in great condition. The pupils of Mary in the picture reflect the Indians and clergy present at the time of the first revelation of the image. No paint was used, and chemical analysis has not been able to identify the color imprint. Additionally, studies have revealed that the stars on Mary’s mantle match exactly what a Mexican would have seen in the sky in December of 1531.

Juan Diego thought there were others who would have been more fitting ambassadors to bring such an important message from so important a person, but the Blessed Mother chose him and she helped him fulfill the mission. She will also help each of us fulfill our part in her Son’s plan of salvation.

Let us turn to Our Lady of Guadalupe during this Year of Faith. She desperately wants the birth of a New Evangelization. May she continue to bring her motherly care to the Americas, the United States and to us in the Archdiocese of Boston.