The installation of Bishop Malone of Buffalo

This week we saw the passing of one of the great figures of the pro-life movement, Nellie Gray. 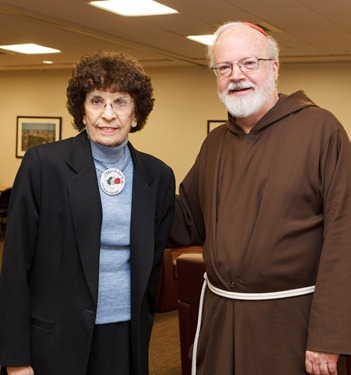 With Nellie at the 2009 Women’s Conference

I would like to share with you my statement that I issued Monday, the day we learned the sad news:

Having received news of Nellie Gray’s death, I wish to express my sincere condolences and prayers for her family and for all who came to know and love her in the Pro-Life Movement. Her love for life and her dedication to protecting the unborn, the most vulnerable among us, have inspired countless generations of Catholics and non-Catholics alike, and we will miss her tremendously.

Nellie Gray will be remembered as the Joan of Arc of the Gospel of Life. The architects of the pro-abortion movement in the United States thought that the opposition would go away, but close to 40 years later the issue is still very much alive, thanks in part to the annual March for Life and because of people like Nellie who are committed to the culture of life. Having participated in every single March for Life since its inception, I have witnessed firsthand her advocacy and dedication. I was honored by her presence in Boston in 2009, when during the Boston Catholic Women’s Conference we conferred upon her the Culture of Life Award.

Her death is a great loss for both our Church and our Country, but her life has left a meaningful and lasting impression upon the hearts of those who knew her and upon the many hearts of those whose lives she saved. We will keep Nellie Gray and all those who mourn her death in our prayers. We ask God to grant her eternal rest and peace, and we give thanks to Him for the gift of her life.

Sister Josephine Fallon’s presence at the Pastoral Center and her presence to the priests and people of the archdiocese is much appreciated. We had the opportunity to express that appreciation at a farewell gathering Thursday here at the Pastoral Center. She has been named Superior of the U.S. Delegation for the Sister Disciples of the Divine Master, which necessitates her moving to Staten, Island New York. 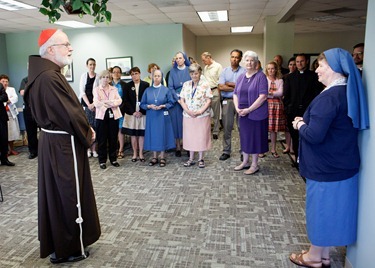 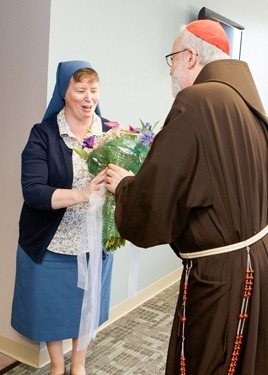 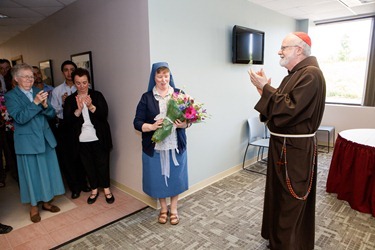 She will be sorely missed, but we know she will be back visiting frequently.

At the same time, we are very consoled that Sister Nieves, who worked in Boston for so many years, is returning as the local superior. So many of our people know her very well, and her presence here will be a blessing for the Church. 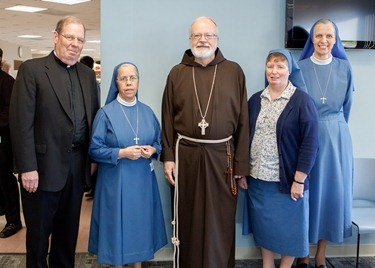 The work done by the Sister Disciples with the priests at Regina Cleri, their presence at West Street and here at the Pastoral Center is a great blessing for all of us. We pray that the Lord will bless the community with many vocations.

Bishop Richard Malone, who was auxiliary bishop here in Boston and then Bishop of Portland, Maine, was installed as the 14th Bishop of Buffalo, New York last Friday. Buffalo is a very large and active diocese. He is replacing Bishop Edward Kmiec who is retiring because of age. It was a wonderful gathering of priests, people and bishops at the Cathedral for the installation. There were many priests from Boston, Maine and Buffalo who accompanied us.

Cardinal Dolan, who is the Metropolitan because it is part of the province of New York, installed Bishop Malone. 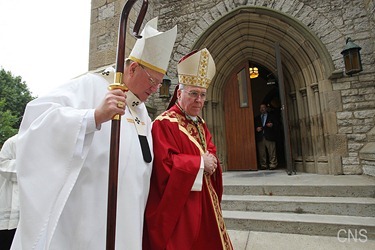 The Apostolic Nuncio, Archbishop Viganò, although he was delayed because of his flights, also addressed the congregation at the end of the Mass. Also with us were Cardinal Eagan and about 20 other bishops including Buffalo Auxiliary Bishop Edward Grosz and Bishop of Erie Donald Trautman and Bishop of Syracuse Robert Cunningham, who are Buffalo natives. 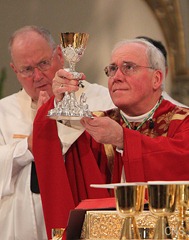 Not able to be with us, though I’m sure he was in spirit, was Buffalo retired Auxiliary Bishop Bernard McLaughlin, who will turn 100 later this year.

There was great enthusiasm and optimism as the people received their new Bishop. The people certainly expressed their affection and gratitude for the two former bishops who were present, Bishop Edward Kmiec and Archbishop Henry Mansell.

From there, I traveled to Pittsburgh for the solemn profession of five men from my Capuchin province. The men were taking perpetual vows, traditionally what we would call solemn vows. After the novitiate, Capuchins usually take temporary vows for three years. Then, after those three years of temporary vows, they usually take vows for a lifetime. 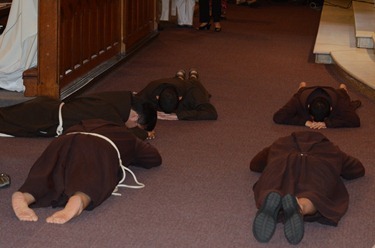 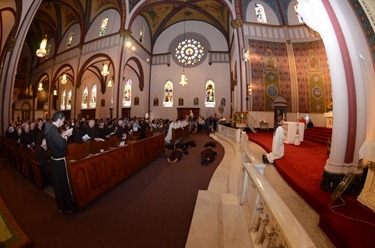 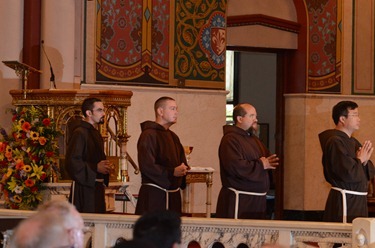 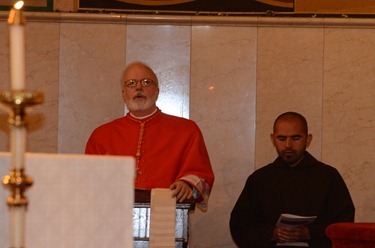 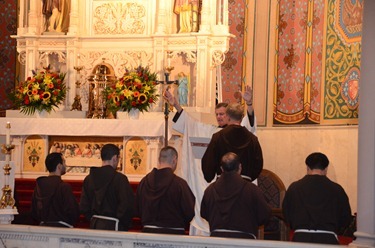 We had the ceremony at the Church of St. Augustine, the place where I made my own profession and where I was ordained a priest. 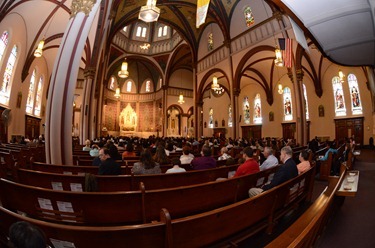 It is an old German parish that is a replica of a church in Bavaria. It was a beautiful celebration for us, especially being held on the Feast of St. Clare. It was a wonderful way to celebrate this important occasion.

Then, back in Boston, on Tuesday I went to the Connors Retreat Center in Dover to participate in the Catholic Conversation Project. The CCP is an annual two-day retreat that brings together about two dozen young theologians from different backgrounds for a time of dialogue and discussion. Their topic for discussion this year was “Faith in the Public Square.”

Bishop Daniel Flores of Brownsville was there for the duration of their meeting, but I was also happy to be able to be with them for the afternoon.

I joined them for lunch and then participated in the conversation with them. In my remarks I urged them to be true teachers of the faith. Many of them are teaching undergraduates at Catholic Colleges, which is a great responsibility, especially today, when so many young people arrive at college without really knowing the basics of the faith. I told them they had a very special opportunity — even a responsibility — to share our Catholic faith with the young Catholics who are in their classes.

We are so pleased that Sister Belinda of the Missionary Sisters Servants of the Word and Father Felipe Gonzalez have organized a group of volunteers who are doing house-to-house visitations in the Cathedral Parish. This effort has had a wonderful effect in reconnecting many people with the Church. This is truly an exercise in the new evangelization. 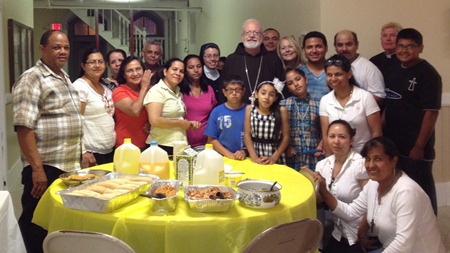 After they come back from their visits in the neighborhood, they gather for some refreshments in the Cathedral rectory. I stopped by to greet them Tuesday evening.

You may also notice that my sister, Mary Ellen, is in the picture. Mary Ellen is visiting this week.

On Wednesday, I met with representatives of the St. Boniface Haiti Foundation.

They gave me a report on the expansion of the hospital there and the other important work they are doing. They have a fundraiser coming up in September, which I will be attending. I was sorry to hear that cholera continues to be a pressing problem in Haiti. This seems to be something of a recent development. It is believed that, ironically enough, that the U.N. troops who came in to keep the peace after the earthquake are really what occasion the outbreak of cholera, because Haiti had not had a cholera problem previously. But the Catholic hospitals are making a contribution and they are working together with Catholic Relief Services and the Catholic Hospital Association trying to strengthen the health care system there.

They have a fundraiser coming up in September, which I will be attending. I urge you to join me in supporting the foundation’s good works.

And speaking of good works, I want to end this week with a note of congratulations to Father Jack Ahern and Father Doc Conway of Holy Family, St. Peter’s and Blessed Mother Teresa parishes in Dorchester.

Last week, they were recognized as “Crime Fighters of the Year” at Boston’s National Night Out celebration in South Boston for their work building relationships with and between the neighborhood and law enforcement.

It is an honor well deserved. 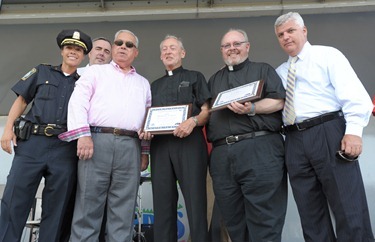