Hello and welcome back,

I hope you have all had a good start to this season of Lent. For us as Catholics, Lent is a very special time, a time for us to renew our baptismal commitment, our life of prayer, of service, of a sense of mission and vocation. It is a baptismal retreat for us.

I felt very privileged to begin Lent this year with the Holy Father in Rome. 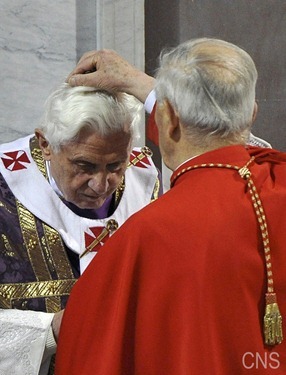 He had a very beautiful message for us to begin this very important season I want to share with you an excerpt of his message here:

Concern for others entails desiring what is good for them from every point of view: physical, moral and spiritual. Contemporary culture seems to have lost the sense of good and evil, yet there is a real need to reaffirm that good does exist and will prevail, because God is "generous and acts generously" (Ps 119:68). The good is whatever gives, protects and promotes life, brotherhood and communion. Responsibility towards others thus means desiring and working for the good of others, in the hope that they too will become receptive to goodness and its demands. Concern for others means being aware of their needs. Sacred Scripture warns us of the danger that our hearts can become hardened by a sort of "spiritual anesthesia" which numbs us to the suffering of others. The Evangelist Luke relates two of Jesus’ parables by way of example. In the parable of the Good Samaritan, the priest and the Levite "pass by", indifferent to the presence of the man stripped and beaten by the robbers (cf. Lk 10:30-32). In that of Dives and Lazarus, the rich man is heedless of the poverty of Lazarus, who is starving to death at his very door (cf. Lk 16:19). Both parables show examples of the opposite of "being concerned", of looking upon others with love and compassion. What hinders this humane and loving gaze towards our brothers and sisters? Often it is the possession of material riches and a sense of sufficiency, but it can also be the tendency to put our own interests and problems above all else. We should never be incapable of "showing mercy" towards those who suffer. Our hearts should never be so wrapped up in our affairs and problems that they fail to hear the cry of the poor. Humbleness of heart and the personal experience of suffering can awaken within us a sense of compassion and empathy. "The upright understands the cause of the weak, the wicked has not the wit to understand it" (Prov 29:7). We can then understand the beatitude of "those who mourn" (Mt 5:5), those who in effect are capable of looking beyond themselves and feeling compassion for the suffering of others. Reaching out to others and opening our hearts to their needs can become an opportunity for salvation and blessedness. 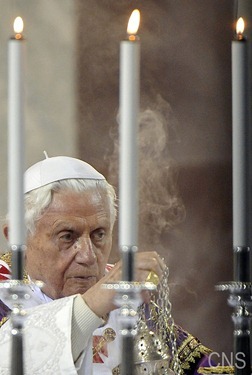 "Being concerned for each other" also entails being concerned for their spiritual well-being. Here I would like to mention an aspect of the Christian life, which I believe has been quite forgotten:fraternal correction in view of eternal salvation. Today, in general, we are very sensitive to the idea of charity and caring about the physical and material well-being of others, but almost completely silent about our spiritual responsibility towards our brothers and sisters. This was not the case in the early Church or in those communities that are truly mature in faith, those which are concerned not only for the physical health of their brothers and sisters, but also for their spiritual health and ultimate destiny. The Scriptures tell us: "Rebuke the wise and he will love you for it. Be open with the wise, he grows wiser still, teach the upright, he will gain yet more" (Prov 9:8ff). Christ himself commands us to admonish a brother who is committing a sin (cf. Mt 18:15). The verb used to express fraternal correction – elenchein – is the same used to indicate the prophetic mission of Christians to speak out against a generation indulging in evil (cf. Eph 5:11). The Church’s tradition has included "admonishing sinners" among the spiritual works of mercy. It is important to recover this dimension of Christian charity. We must not remain silent before evil. I am thinking of all those Christians who, out of human regard or purely personal convenience, adapt to the prevailing mentality, rather than warning their brothers and sisters against ways of thinking and acting that are contrary to the truth and that do not follow the path of goodness. Christian admonishment, for its part, is never motivated by a spirit of accusation or recrimination. It is always moved by love and mercy, and springs from genuine concern for the good of the other. As the Apostle Paul says: "If one of you is caught doing something wrong, those of you who are spiritual should set that person right in a spirit of gentleness; and watch yourselves that you are not put to the test in the same way" (Gal 6:1). In a world pervaded by individualism, it is essential to rediscover the importance of fraternal correction, so that together we may journey towards holiness. Scripture tells us that even "the upright falls seven times" (Prov 24:16); all of us are weak and imperfect (cf. 1 Jn 1:8). It is a great service, then, to help others and allow them to help us, so that we can be open to the whole truth about ourselves, improve our lives and walk more uprightly in the Lord’s ways. There will always be a need for a gaze which loves and admonishes, which knows and understands, which discerns and forgives (cf. Lk 22:61), as God has done and continues to do with each of us.

(You can read the full message at the Vatican website.)

As I mentioned in my last post, I spent much of this week in Rome for meetings with the Holy Father and the consistory for the creation of new cardinals.

On Friday, the day before the consistory, he called the cardinals together to reflect on the theme of the New Evangelization and the Year of Faith. Talks were given by Cardinal Timothy Dolan of New York and Archbishop Rino Fisichella, who is the new president of the Pontifical Council for the New Evangelization. It was an opportunity for dialogue with the cardinals and we prayed Midday Prayer and Vespers together with the Holy Father. At the end the Holy Father shared with us some of his reflections. 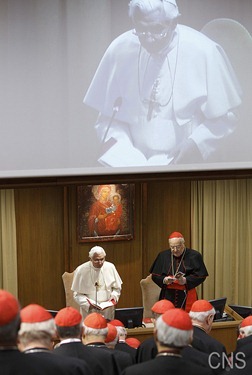 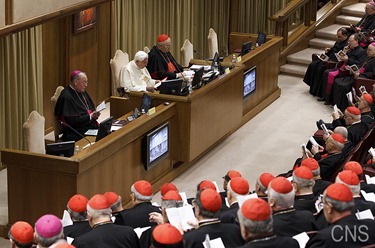 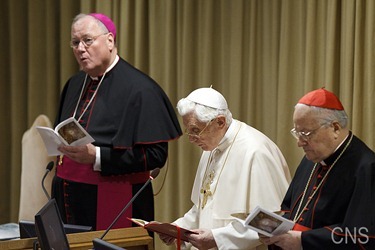 It was a very moving experience to be together with the Holy Father and the other cardinals. Cardinal Dolan gave a very good intervention, talking about the new evangelization, and Archbishop Fisichella spoke about the plans of the pontifical council for the Year of Faith and going forward. 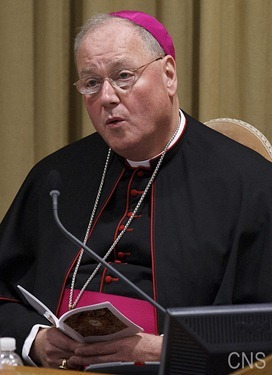 On Saturday, we celebrated the consistory in the morning using the new rites, which involved giving in one ceremony the biretta, ring and titular church that the new cardinals receive.  Of course among them were Cardinal Edwin O’Brien, who up until now has been Archbishop of Baltimore, and is now heading the Order of the Holy Sepulcher and now will reside in Rome; and Cardinal Timothy Dolan, who is the Archbishop of New York and currently the president of the U.S. conference of Catholic Bishops. 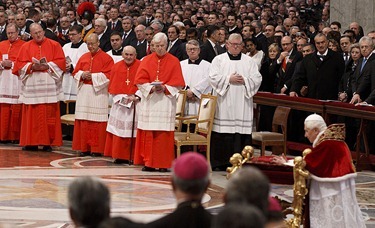 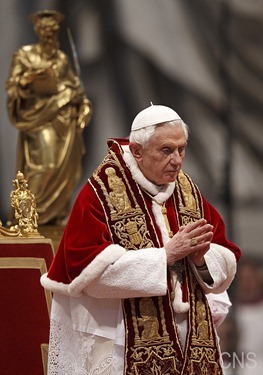 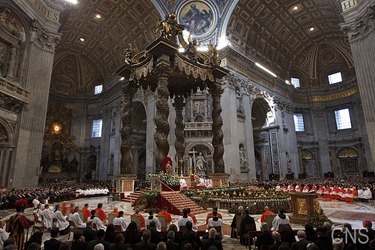 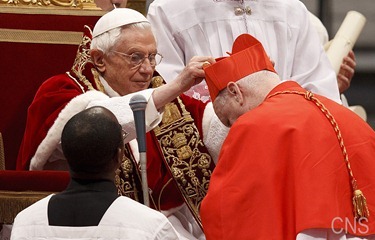 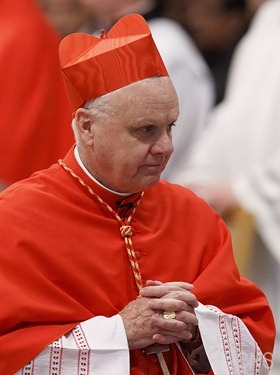 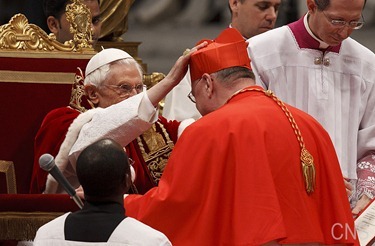 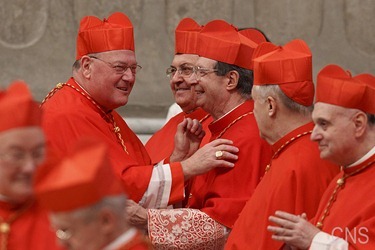 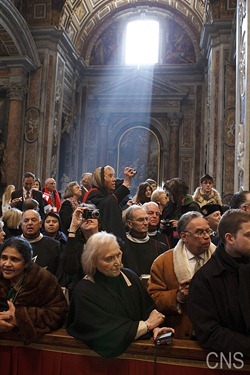 At the end of the ceremony we were very happy to hear the announcement of new canonizations, including Blesseds Kateri Tekakwitha and Mother Marianne Cope.

That afternoon, there was a reception at the North American College to honor our two new American cardinals. 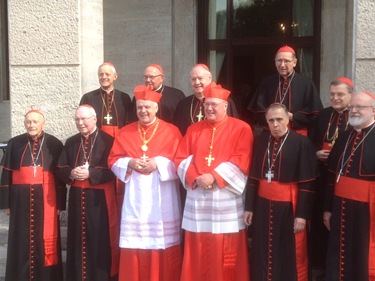 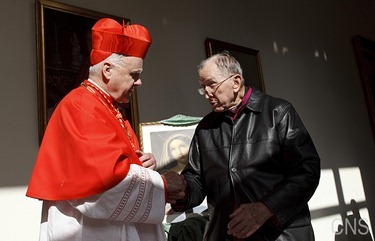 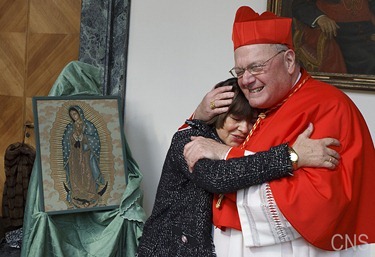 In the evening, there was the traditional blessings and greetings by the new Cardinals. 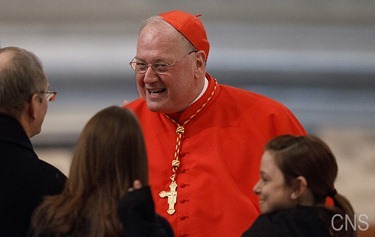 The following day was the Mass of Thanksgiving with the Holy Father. The Holy Father transferred the Feast of the Chair of St. Peter to Sunday because otherwise it would have fallen on Ash Wednesday. So, it was a very beautiful way to mark the consistory of the new cardinals.

One of the photos I want to share with you is one I took of the statue of St. Peter in the Basilica, in which St. Peter is vested in a papal tiara and a cope for the celebration. 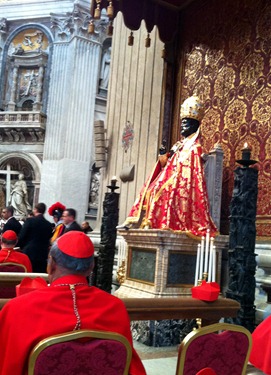 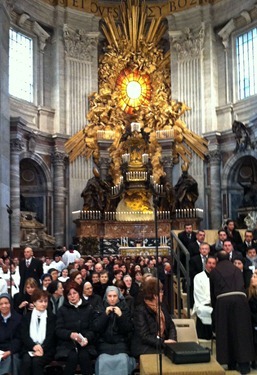 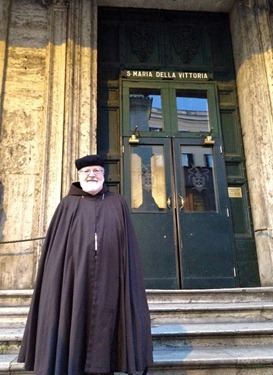 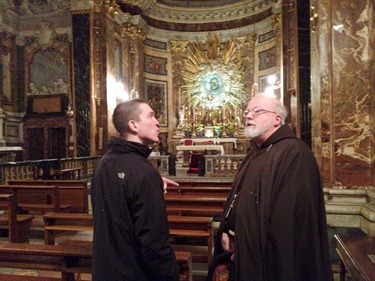 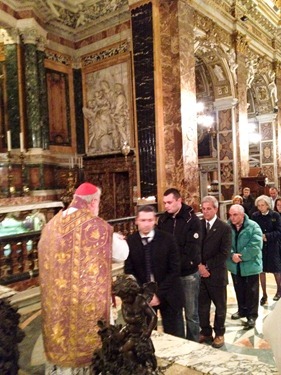 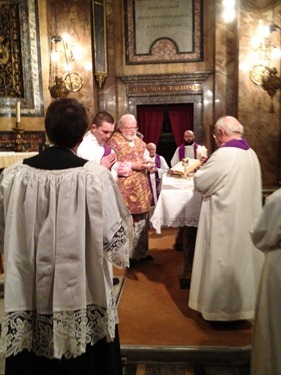 I was very happy to have Deacon Eric Bennett and seminarian Thomas McDonnell accompany me, along with Msgr. Steve Avila. 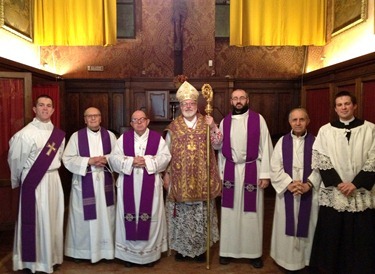 During my stay, we were also able to meet for dinner with two priests of the archdiocese or currently in Rome studying, Father Richard Mehm and Father Kevin Toomey, who are here for the semester. They are studying at the Institute for Continuing Theological Education run by the North American College. In addition, the consistory coincided with the visit of Father Bill Dunn to Rome, who joined us for dinner there. 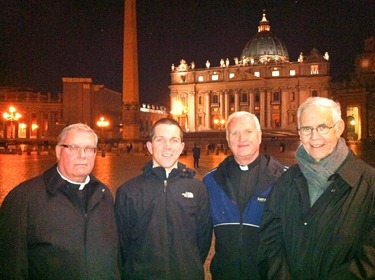 I would like to finish my post today asking you all to pray for the candidates and catechumens who are preparing to enter into full communion with the Church this Easter.

We will be gathering with them on Sunday at the Cathedral of the Holy Cross in Boston, where we celebrate the Rite of the Election and Call to Continuing Conversion. 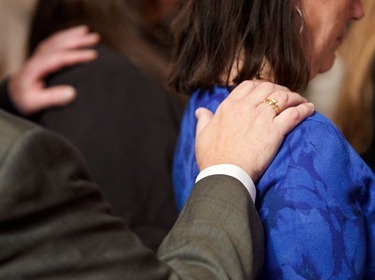 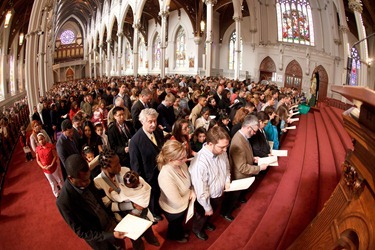 In a time when our Church can seem marginalized, and even despised by some, it is always inspiring to see so many people anxious to share our Catholic faith.