God of this City

Last Thursday, we hosted a meeting for the Massachusetts Council of Churches, an ecumenical association of various religious denominations, at our Pastoral Center. 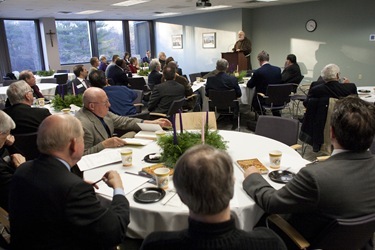 Although we are not officially members of the Council, we do collaborate closely with them and support many of their efforts. Father Ed O’Flaherty, who heads our Archdiocesan Office of Ecumenical and Interreligious Affairs, represents us on their council.

The theme of the gathering was the observance of the Sabbath. We addressed our shared concern that society has lost a sense of priority and reverence for Sunday worship and the practice of people coming together as a community of faith.

The Rev. Joel Andrele, President of the Council, facilitated our gathering and invited Bishop Margaret Payne of the New England Synod of the Evangelical Lutheran Church in America to share her reflections on the topic. 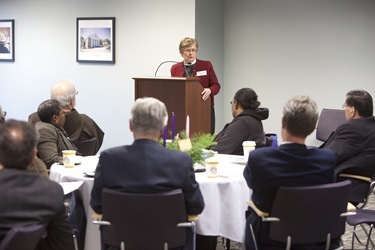 We also heard remarks from the Rev. Kirk Byron Jones, author of “Addicted to Hurry: Spiritual Strategies for Slowing Down”. 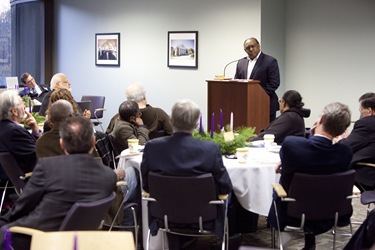 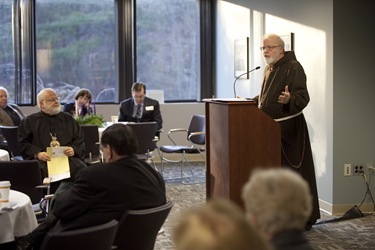 I also offered some remarks

After the presentations we gathered in small groups to share suggestions for promoting the Sunday observance in our churches.  We all agreed that we should try to look for ways to convince local schools and municipalities to respect Sunday morning as a time for family and worship, and not schedule cultural and athletic events at those times. A plan of action for the various churches to work together on this is being worked out.

I am very grateful to Father O’Flaherty, Father David Michael and Vito Nicastro for their work in planning this event and their leadership at the Office of Ecumenical and Interreligious Affairs.

On Friday, we hosted an appreciation luncheon for our Elementary Schools Task Force here at the Pastoral Center.

I am most appreciative of the time and professional expertise offered by  John Kaneb, our co-chairs Peter Zotto and Bill Mosakowski,  the entire Task Force, Jim McDonough, the Finance Office, Mary Grassa-ONeill and the Catholic School Office team.  Our schools were well served by the visits, feedback, analysis and follow-up seminars.  Our Catholic schools will greatly benefit from their hard work, commitment and dedicated service to the Church.

Also that day, I went to dedicate the new Chapel of the Holy Name of Jesus at the Blessed Peter Faber Jesuit Community at Boston College.

Weston School of Theology recently relocated to BC, which necessitated finding housing for the students. So, they built a complex on Foster Street, and part of the complex is a new chapel. It was dedicated to the Holy Name of Jesus.

The Blessed Faber Jesuit community, which opened this past fall, is home to a group of 75 Jesuits from around the world. Many of them were able to join me for the dedication.

The community’s mission is to form priests and many of its members are students and teachers at the Boston College School of Theology and Ministry.

I was invited to come dedicate the chapel on the Feast of St. Francis Xavier, one of St. Ignatius’ closest associates in the founding of the Society of Jesus, and one of the greatest missionaries in the history of the church. 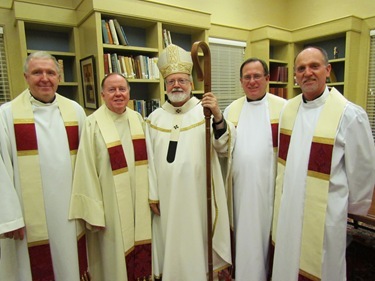 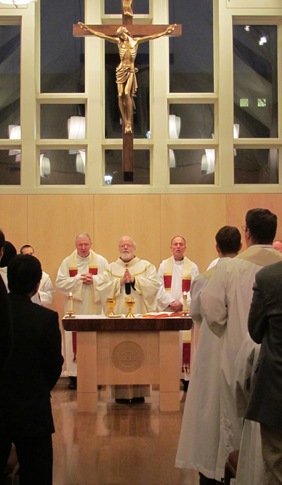 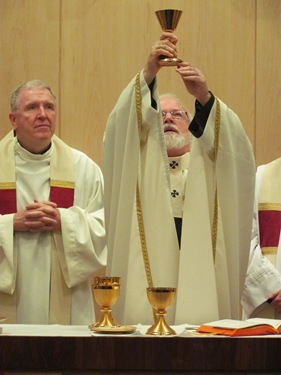 I’ve ordered a statue of Our Lady of Montserrat to place in the chapel because St. Ignatius, at the time of his conversion, made a pilgrimage to Montserrat and that’s where he left his weapons and began religious life.

That evening, I attended the annual Cushing-Gavin Awards Dinner, which recognizes the contributions of the archdiocese’s Labor Guild. The guild is an association of union and corporate personnel, arbitrators, professors and attorneys who are dedicated to promoting strong employee relations. 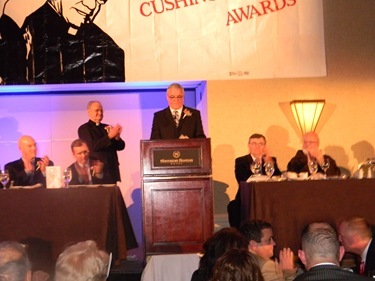 There were about 1,000 people at the dinner and it is always a wonderful event that recognizes those individuals who have promoted a culture of healthy worker relations.

Each year they honor one representative of labor, one from management, a mediator and labor attorney.

This year’s honorees included John Messervy, the Director of Capital and Facility Planning for Partners Health Care; Lou Rasetta, business manager for the International Union Operating Engineers Local 4; Nancy Peace, who won the Boyle Award for her work as an arbitrator; and attorney Burt Rosenthal. 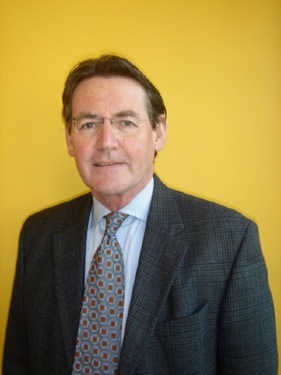 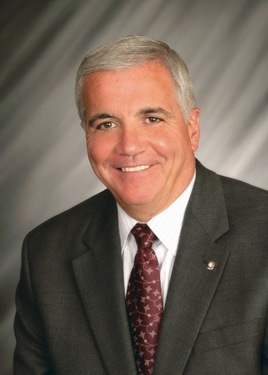 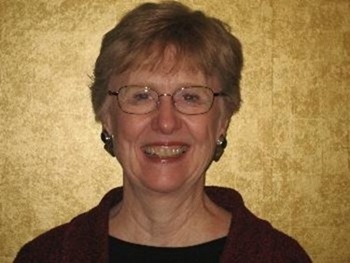 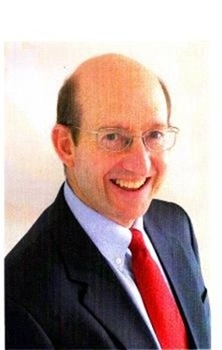 It shows the Church’s commitment to the labor union movement and collective bargaining as an important right of workers, and is an expression of the Church’s social Gospel for economic justice.

We’re very proud of the long association of the archdiocese with the labor movement and this initiative of Cardinal Cushing. Father Ed Boyle headed the Guild for so many years and now Holy Cross Father Patrick Sullivan is doing a great job as the executive secretary and chaplain.

Later Friday evening, I addressed our young people at our second annual God of This City Tour, which is sponsored by our Office for the New Evangelization of Youth and Young Adults and LIFT Ministries. Father Matt Williams and his staff organized the event. 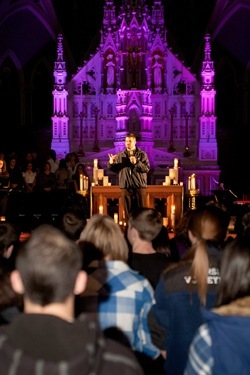 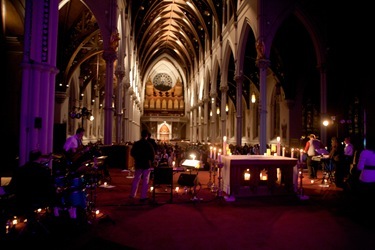 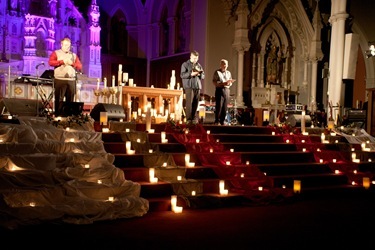 Each night in one of the five regions of the archdiocese, the tour brought together our young people for an evening of prayer, Eucharistic adoration, reflection, confession and music. 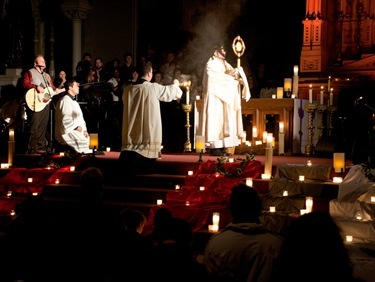 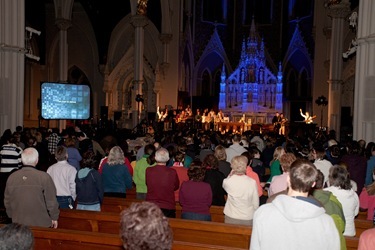 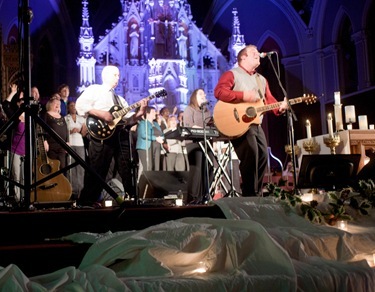 We are so pleased that so many young people experienced this event in our cathedral. I am told that a combined 2,000 people joined the tour at various locations. I know the cathedral had at least 500 people there on Friday. 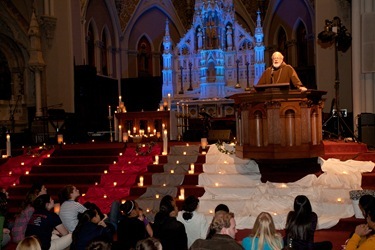 It’s always important for young people to see that they’re not alone in living out their faith, that they have their brothers and sisters who will help them be faithful to the call of discipleship.

Saturday I celebrated Mass for our Archdiocesan Pastoral Council, and we had a meeting for them at Pastoral Center.

Father David Couturier gave a very good presentation on pastoral planning. We also recognized those members of the board whose terms have now concluded, and we thanked them for their years of service.

I spent much of the rest of my week on a trip to represent the U.S. Conference of Catholic Bishops in Paraguay.

I am a member of the USCCB’s Latin American committee, and I was asked to go to Paraguay with Father Andrew Small and meet with the bishops there.

In fact, I’ve have just returned to Boston this afternoon, so I will share the details of the trip with you next week.