I want to begin this week by saying that I am deeply moved by the outpouring of love and support for our brothers and sisters in Haiti.

Through parish special collections in the Archdiocese of Boston, $1,600,000 have been collected to date. The funds for this effort are still in the process of being submitted by our parishes so we expect the total amount we will be turning over to Catholic Relief Services for aid to Haiti will be approximately $2,000,000.

I am proud of the outreach of our pastoral, health care and social service ministries to those impacted by the earthquake in Haiti and to their friends and family in the Archdiocese of Boston. We continue to keep the people of Haiti in our thoughts and prayers and vow to continue to do all we can to assist our brethren in their time of greatest need.

As I left off last week, I was telling you about my journey to Rome for meetings with the Pontifical Council of the Family.

Whenever I am in Rome I try to meet with Boston priests and seminarians who are studying or serving there. This time I had dinner with Tom MacDonald, one of our seminarians who is studying at the North American College, and with Msgr. Deeley who works at the Congregation for the Doctrine of the Faith. 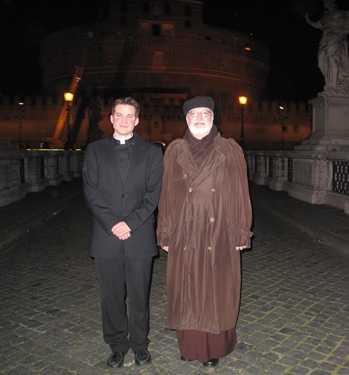 On Thursday I participated at a special Mass at the Basilica with the Holy Father for the Day of the Sick and Our Lady of Lourdes. 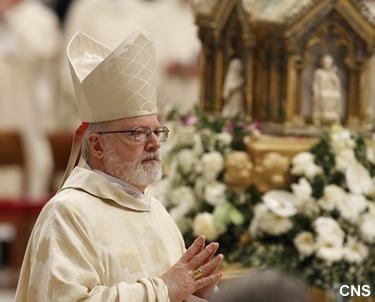 The relics of St. Bernadette were brought in solemn procession. It was a lovely celebration. 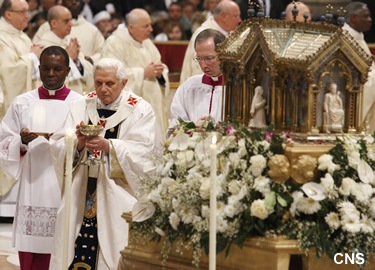 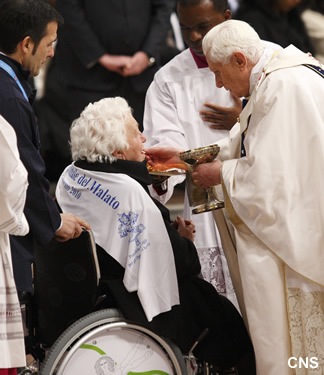 In the Basilica I greeted Dr. John Haas, the head of the National Catholic Bioethics Center. Dr. E. Joanne Angelo,  a psychiatrist from Boston who is on the Pontifical Academy for Life, was also there. 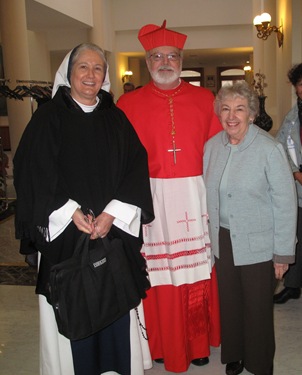 Friday I witnessed a very rare occurrence in Rome – snow!

We get our share of snow in Boston but I understand that it hasn’t snowed in Rome since since 1986. I had certainly never seen it snow there before. 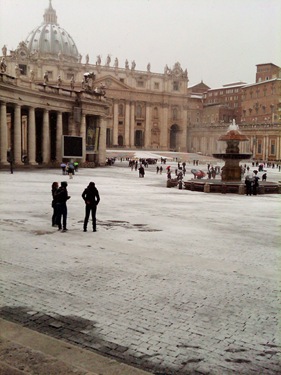 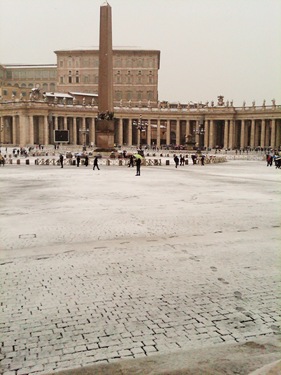 That evening, I was invited to the Irish embassy for dinner. It’s located in a very ancient home on Rome’s Janiculum Hill named Villa Spada that the Republic of Ireland acquired in the 1930’s or 40’s to be their embassy to the Holy See.

Ambassador Noel Fahey and his wife Christine were our hosts. Ambassador Fahey had just been ambassador to the United States before coming there — which shows how important most countries consider the post of Vatican Ambassador, both as representative to the Holy See and also as a listening post, because of the kind of senior diplomats that tend to represent countries from throughout the world.

The ambassador was gracious in inviting us, along with Msgr. Francis Kelly, the Superior of Casa Santa Maria, and Msgr. Liam Bergin, the rector of the Irish college, as well as Ambassador Miguel Diaz and his wife. 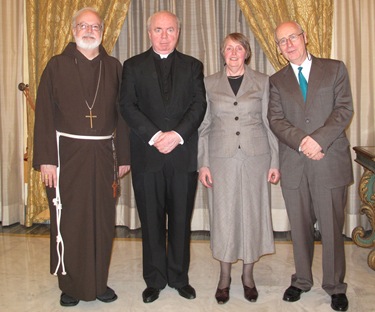 With Ambassador Fahey, his wife Christine, and Msgr. Kelly

Ambassador Diaz, as you may know, is the new U.S. ambassador to the Holy See. When I was bishop in Palm Beach, he was teaching in the seminary there and his wife worked for the diocese forming lay ministers. Both of them have training in theology and they seem to be happy in their new role. Of course, it is challenging going to a new country, particularly with young children, but things seem to be going very well. 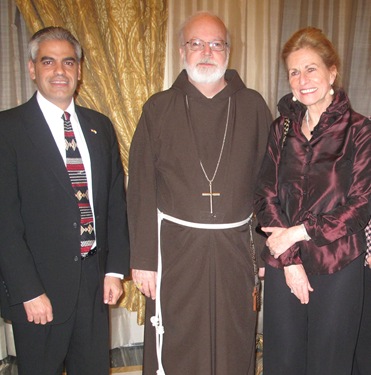 The Irish ambassador was very, very gracious, and of course we all are very concerned for the present crisis in Ireland and we hold them up in our prayers.

As we were there in Rome, the Holy Father was preparing to meet with the bishops of Ireland. We look forward to the letter he will be writing to the Irish people, which will be of great interest to Catholics in Boston as well.

On Tuesday, I had another of the meetings we have been holding with vicariates. As I have mentioned in prior posts, these meetings are held with groups of priests to look at the priorities of the archdiocese and plan for the future.

This particular meeting was hosted by Father Dick Mehm at Immaculate Conception in Malden. It was very well attended and there was very lively discussion and participation. Those blog readers in the Boston area will remember that we had a snowstorm Tuesday which made for some difficult driving. However, I was pleased to see that everyone arrived despite the snow.

That evening, I attended a Mardi Gras dinner at Boston College High. BC High traditionally hosts the dinner, and they invite the priests from the area. I was happy to greet my brother priests there and thank BC High for their hospitality.

It is always a nice event that the priests enjoy very much. In fact, many of our priests are alumni of BC High, including one of my priest secretaries, Father Robert Kickham.

Both on Tuesday and Wednesday, I received visits from bishops of South America.

He was in Boston with the head of his Catholic Charities program, Mr. Fabio Barreto. He was involved with meetings in the area and stopped by to pay a personal visit.

Likewise, we were visited by Bishop Kay Martin Schmalhausen Panizo. He is Peruvian but his father was German which explains the last name Schmalhausen, which means “narrow house” in German.

Bishop Schmalhausen is the prelate of Ayaviri, which is in the Peruvian Andes. About 90 percent of the population is indigenous and they speak Kechua.

He had meetings in the States and he came to speak to me about his diocese. He also met with Father Kevin Hayes, the president of the St. James Society, because priests from the Society have worked in his prelature before. He came with Father Juan Carlos Quine, a Peruvian priest from his prelature. 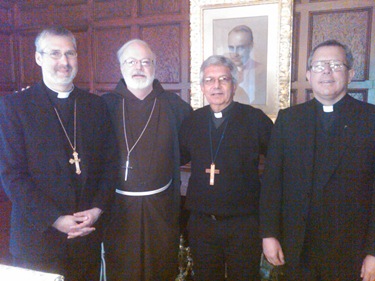 With Bishop Schmalhausen (on my left), Bishop Martinez and Father Quine

This past Wednesday was Ash Wednesday, which marked the beginning of the season of Lent. 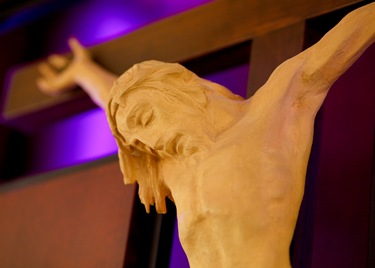 That day, we had two Masses at the Pastoral Center: an 8 a.m. and noon. I celebrated the noon Mass and there were a number of concelebrating priests and deacons. 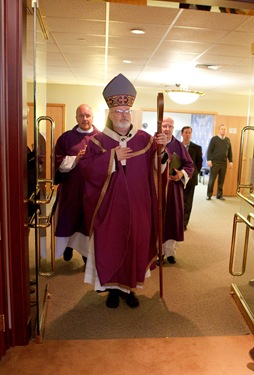 It was a standing-room-only crowd of people coming for ashes. Ash Wednesday is a day when Catholics do feel drawn to the Church, as this very ancient ritual strikes a chord in people’s hearts. 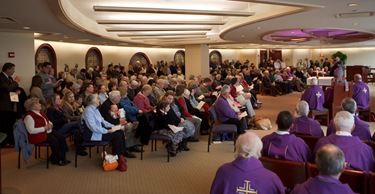 We’re very happy that in all of our parishes and chapels there are so many Catholics who do make a point of coming to receive the ashes. I understand that at St. Anthony Shrine on Arch Street they give out ashes to about 40,000 people. 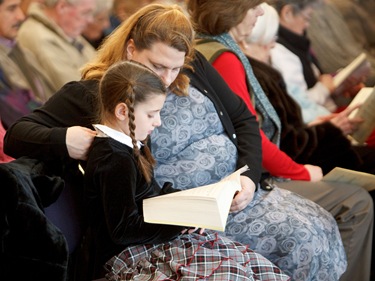 One of the things I spoke about in my homily was The Light Is On For You, a program that we are initiating this Lent here in the archdiocese that gives the opportunity for confessions in all of our churches and chapels on Wednesday evenings from 6:30 p.m. to 8:00 p.m. 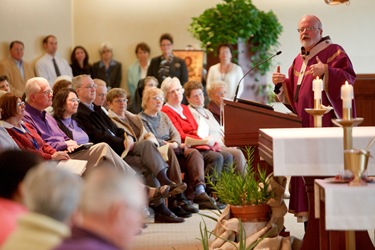 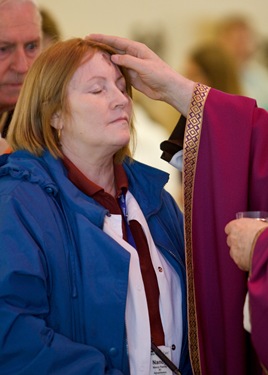 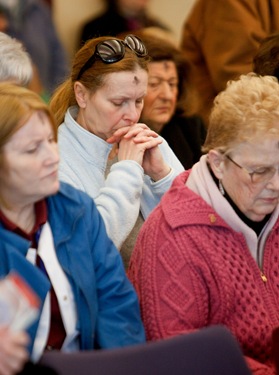 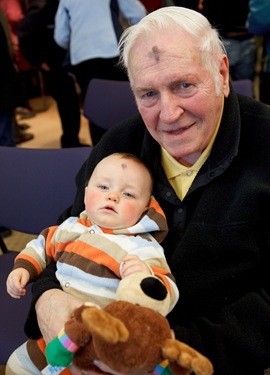 Afterwards, I was interviewed by Greg Wayland of NECN about this initiative. You may have seen this clip from the evening news already, but in case you missed it, or you want to see it again, I have included it for you.

I encourage you all to visit one of our churches or chapels on Wednesdays during this Lenten season. The lights will be on.

You have my prayers.