The result of Tuesday’s special election was very surprising. It has captured the attention of the world because no one ever suspected that someone who was not a Democrat would be able to be elected to the seat the late Sen. Ted Kennedy held for nearly 50 years. Several commentators have noted that the election has significance beyond Massachusetts, specifically that it points to deeply felt anxiety about the economy, unemployment and the health care debate. 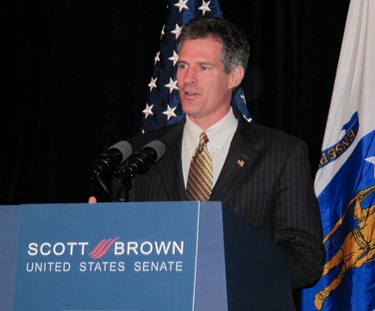 I think it is refreshing that the people of Massachusetts have voted independent of their party affiliation. In the Church we have always encouraged the people to look at issues rather than just vote party-line or vote for sectarian reasons.

We hope that Senator-elect Scott Brown will be successful in his work in Washington. He has pledged himself to represent the people of the Commonwealth well. He has my prayers and the prayers of the people of Massachusetts.

At the same time we are grateful to all the candidates who participate in the democratic process because it requires a great sacrifice from individuals and their families, yet without people willing to run for office we would not be able to have a democracy.

Last Friday, we had the first of a series of vicariate dinners with priests at St. John the Evangelist Parish in Chelmsford. Just as I do frequently with the young priests – bringing the priests together for prayer, dinner, and conversation – we thought that during the Year for Priests it would be good to extend this opportunity to all priests. 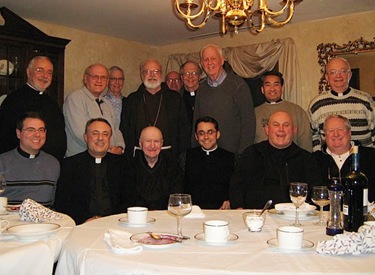 We have such a large presbyterate, so to have the opportunity to interact in a more intimate, social way is a wonderful opportunity to get to know our priests better and build our priestly fraternity.

Through these dinners we hope to be able to listen to their ideas and to acknowledge the wonderful work that they do and encourage them in their priestly ministry.

On Saturday, I celebrated the funeral Mass of Father Joe McGlone, the retired pastor of Corpus Christi Parish in Newton. He had been pastor there for 32 years. There was a wonderful turnout of priests and parishioners. May he rest in peace. 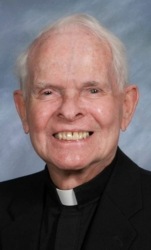 Although I was unable to attend, I want to make mention of the Catholic Daughters of the Americas conference. Father Kevin O’Leary, who is their chaplain, attended it in my stead. We are very pleased they are beginning to start groups on Catholic campuses for young women. 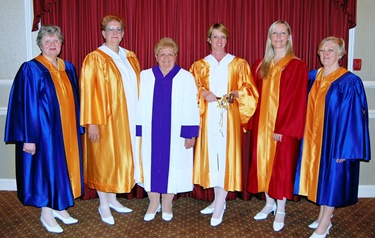 I celebrated Mass with the deaf community at Sacred Heart Parish in Newton on Sunday, with Sacred Heart’s pastor Father John J. Connelly and Father Hugh Macsherry, a Franciscan, who concelebrated with me. We had a full church. 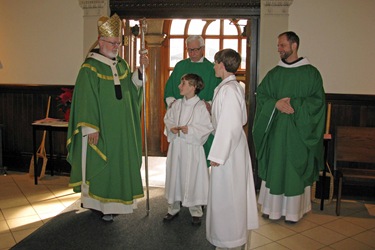 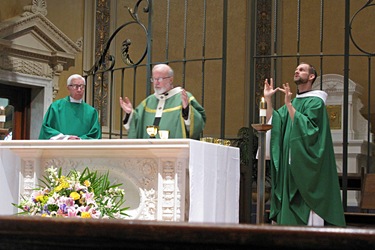 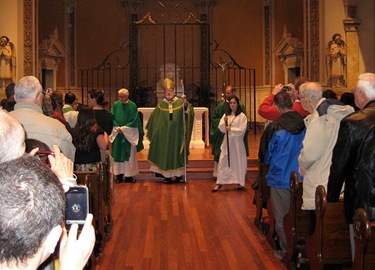 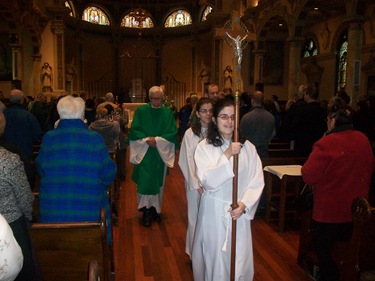 Father Shawn Carey and Father Jeremy St. Martin, who both work in our deaf apostolate here in the archdiocese, were in Texas at a meeting organized by the National Catholic Office for the Deaf and so they could not participate at the Mass. 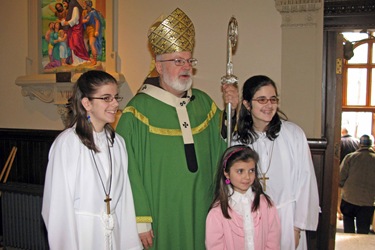 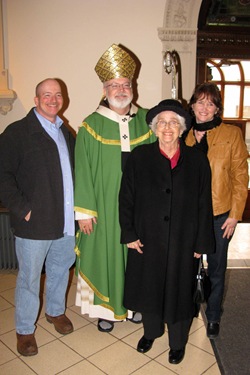 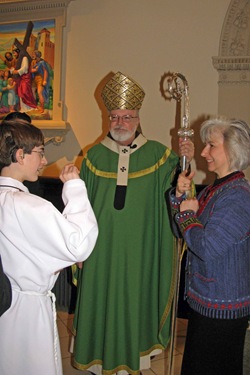 It was a wonderful experience to be a part of their liturgy, their worshipping community. Of course, for someone with hearing, one of the strangest things is not having the singing. One of the most moving things was the Prayer of the Faithful where several people in the community prayed for different intentions. 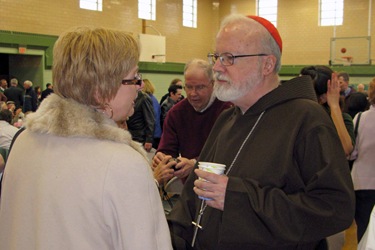 There was a young boy who prayed for the victims of Haiti, particularly those who were in the school for the deaf there who had had some contact with the school where he goes. 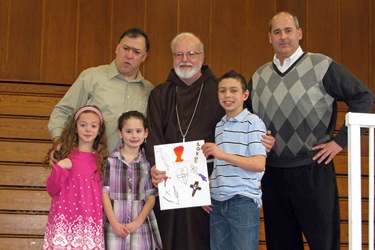 I was so impressed at the proficiency of the interpreters, particularly Trudy Schafer, who teaches at Northeastern University and who is an extraordinary asset to the community there.

Then, at the reception, they gave me a crucifix. 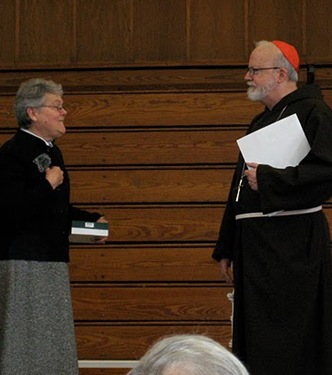 Marge Tucker, a member of the deaf Catholic community,
presented me with the crucifix. 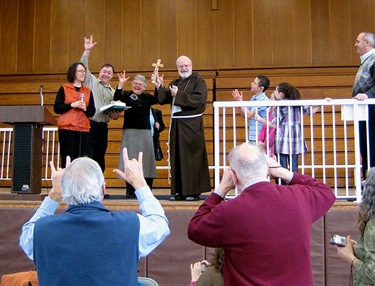 Until they pointed it out to me, I didn’t even notice that Christ is speaking in sign language from the cross, saying “I love you.”

That evening, I had confirmation at St. Charles Parish in Woburn. There were about 75 young men and women and a standing-room-only crowd in the church. It was a beautiful choir and a very fine program. Father Tim Shea and Father Arthur MacKay are doing a wonderful job there.

On Monday, I had the first of a series of vicariate meetings in Lowell. We’re having these pastoral planning meetings in order to look at pastoral priorities for the archdiocese and to get the input of the priests. It was very well attended, despite the fact that it was a very snowy day. Lowell looked like a winter wonderland. The trees and everything were covered with snow. Many diocesan priests and Oblates of Mary Immaculate who staff several parishes in the area were there.

On Wednesday, the first contingent of volunteer medical personnel from St. Elizabeth’s Hospital went to Haiti. One of the things we are doing in the Archdiocese to help the recovery efforts is providing support through our Catholic hospitals. The hospitals have asked for volunteer doctors and nurses and about 75 have volunteered. 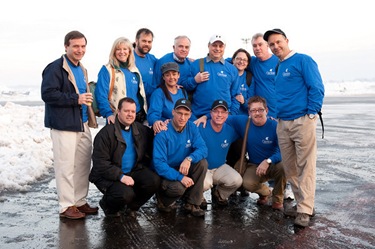 So, they went down – the first group of them. John Fish, a good friend of the archdiocese, was kind enough to lend us a plane to transport them to Milot, which is in the north coast of Haiti. The Sacre Coeur hospital where the team was headed is sponsored by the Order of Malta. They are trying to use that facility as a trauma center. The military has begun to transport injured people by helicopter to the hospital where they have a heliport. 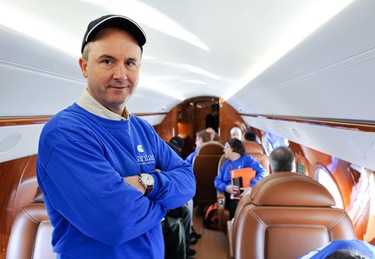 The Caritas team is led by Mark Pearlmutter, MD, Chief of Emergency Medicine for Caritas Christi

There is also a Haitian priest who went down with them who is also a trained emergency worker. They had Mass before they left.

NECN was there at Hanscom Field when they left and has the following news video on them:

Please keep them and all the earthquake victims they will assist in your prayers.

Peace be with you,