We are quickly approaching the holiest week of the year. This year Easter has come so early in the calendar that it is hard to believe we are already poised to begin Holy Week!

Palm Sunday is always such a magnificent celebration, one that prepares us for all the events of Holy Week by reflecting on Jesus’ triumphal entrance into Jerusalem and His passion. This year I will have Palm Sunday Mass at St. Mary Parish in Franklin, which is one of the largest parishes in the archdiocese. I am looking forward to being there with the people of Franklin.

On Saturday we will celebrate St. Joseph’s Day. The celebration has been moved this year from March 19 to March 15, the Saturday before Holy Week. I will be celebrating Mass with the Little Sisters of the Poor in Somerville. They have a very special devotion to St. Joseph who is a patron of their community.

St. Patrick’s Day will not be liturgically observed in the archdiocese, but we will mark it during the celebration of Mass on the Monday of Holy Week. The Mass will be held at the Cathedral of the Holy Cross at noon and some of the readings will be done in Irish, Irish songs will be sung and the shamrocks will be blessed and distributed. I invite all of you to join me at the Cathedral.

On Tuesday we have the Chrism Mass, which is probably the largest concelebration of the year because all the priests in the archdiocese are invited to participate in the blessing of the oils.

You are all welcomed to join me at the celebrations of Holy Week that will take place at the cathedral as follows: 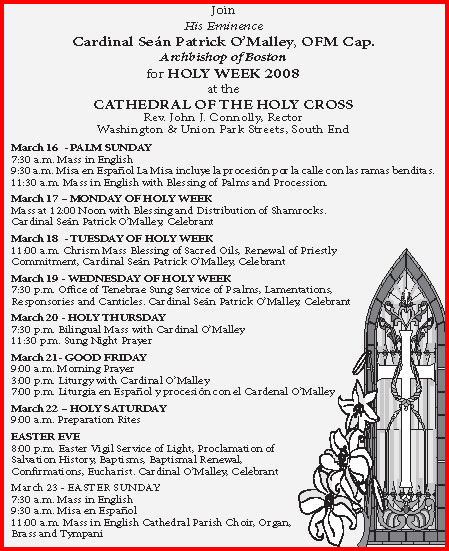 At the end of the month, the Office for the New Evangelization of Youth and Young Adults, the Vocations Office and the Office of Campus Ministry are jointly sponsoring a eucharistic congress for young adults and college students. The congress will take place at St. Stephen Church in the North End March 28-29. 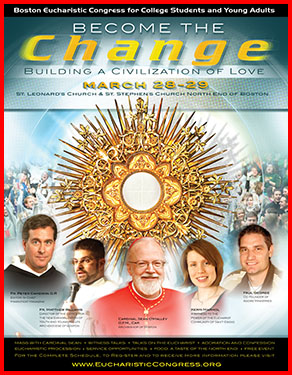 There will be speakers, adoration, a eucharistic procession through the North End and a service component as well. We are particularly encouraging the campus and young adult ministries to invite their constituencies to come to be a part of this wonderful event. The idea has been very well received, and we are hoping that we will have a good turnout.

For more information about the speakers, times and registration, visit their web site and also read the article that was published in this week’s Pilot.

On Thursday of this past week, I had a visit from officials of the Missionary Franciscans of the Immaculate Conception. Sister Elaine Morzone, the mother general, is Australian. She is stationed in Rome but spends a great part of the year visiting the sisters in various houses throughout the world. She was accompanied by Sisters Jeanette Gaudet and Mairead O’Reardon, two council members. They were just passing through and came as a courtesy to say hello. 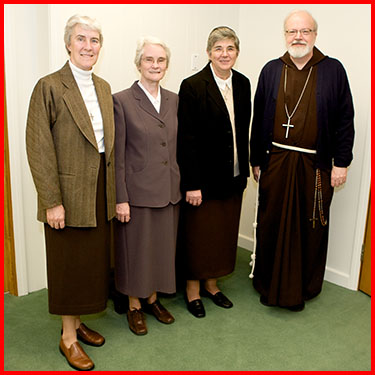 The order has sisters working in Papua New Guinea, and they know the Capuchin friars who work there. Their community is in many parts of the world.

They are the same sisters that run Mount Alvernia High School in Newton, which is a fine Catholic girls’ school here in the archdiocese.

I also had a meeting with Father Joseph D. Calderone who was appointed interim president of Merrimack College in January. 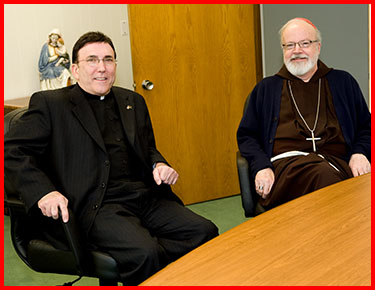 The Augustinian friars founded the college at the request of Cardinal Cushing and it is such an important Catholic institution within the archdiocese. The Augustinians have had parishes in the Merrimack Valley for over a century. I was very happy to meet the interim president and to offer him our assurances of prayers and support as the university is looking for a permanent president.

Last Friday, the directors of religious education had a Lenten day of prayer. As it was first Friday, we invited them to the Mass I celebrate every first Friday for the staff of the chancery. Afterwards we had a little coffee hour, and then I gave them a talk on the new evangelization. There were about 40 DREs in attendance. 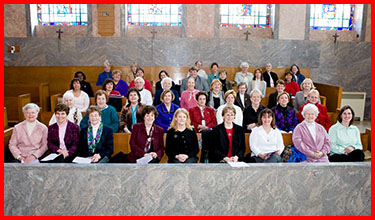 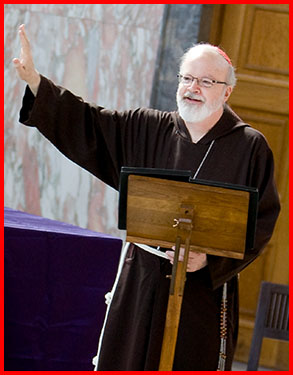 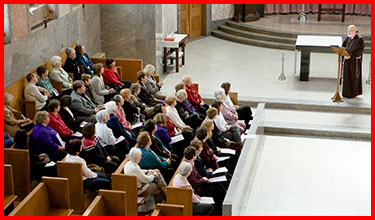 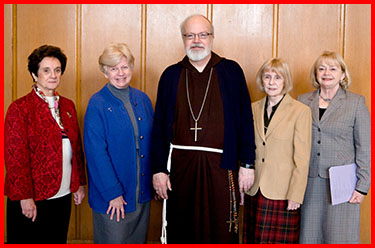 Later that day, I attended a groundbreaking for a low-income housing development for elders in Lowell. The Planning Office of Urban Affairs, in conjunction with the Grey Nuns, is working on the project, which will be next to the wonderful facility the Grey Nuns have there. Lisa Alberghini, president of the Planning Office, was able to attend. 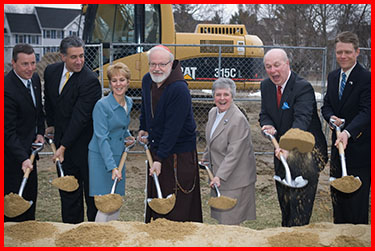 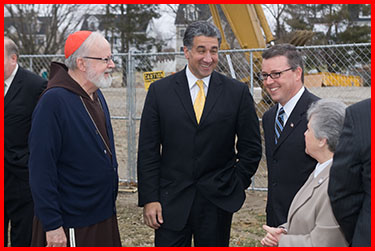 We had a prayer service in the Grey Nuns’ chapel before the groundbreaking. 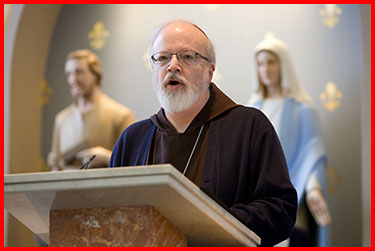 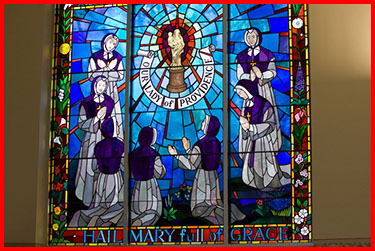 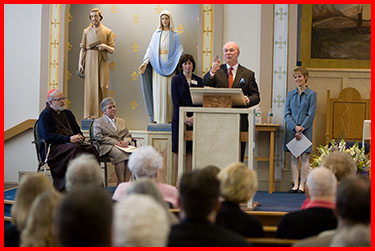 The local provincial of the Sisters of Charity of Ottawa, Sister Prescille Malo, is a real pillar of the community. She is the principal of St. Jeanne d’Arc School, involved on the board of All Saints Hospital and is very anxious for the charism of the Grey Nuns to continue. Even though there are fewer sisters, their mission to serve the poor and the elderly will be enhanced by this type of cooperation. 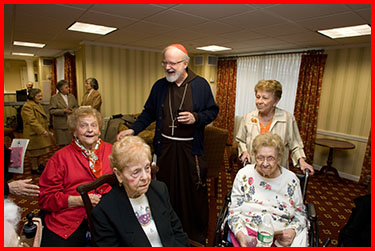 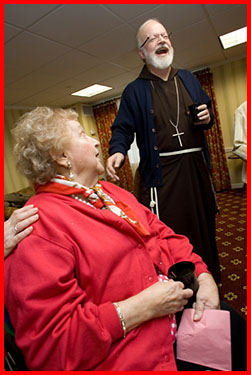 On Saturday, which happened to be International Women’s Day, I attended a diocesan gathering for women who are considering religious life. The day of discernment took place at the Sisters of St. Joseph Motherhouse in Brighton.

They had it in the room they call the “penthouse,” which is up on the top floor and has a fantastic view of the city. Sister Marianne Batho organized the event, and many different religious communities were represented. The sisters talked about their different charisms.

I attended a feast at St. Peter Parish in Cambridge that took place after their Mass to commemorate the Irish potato famine. At the annual Mass, parishioners received potatoes and shamrocks. 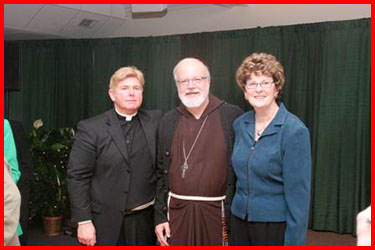 The parish was founded by Irish immigrants who fled the famine in the 1850s. Father Kevin O’Leary, the pastor, instituted this celebration, which is held a bit earlier than the St. Patrick’s Day celebrations.

The big dinner afterward was far from a famine with lots of Irish food. They also had entertainment, including bag pipers and the Irish Sopranos, a lovely trio of women. 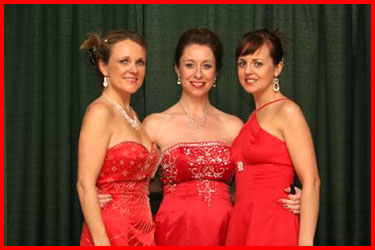 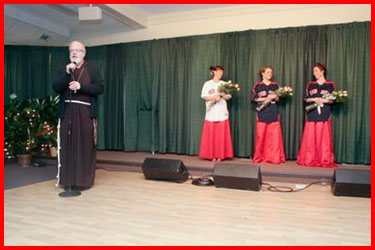 The Sopranos sang traditional Irish songs and a number of arias from Italian operas. They also did a rendition of “Our Lady of Knock” which, of course, is one of my favorite hymns. Bishop Boles and his sister were able to attend, and everyone had a wonderful time.

On Sunday, I attended the 125th anniversary Mass of Immaculate Conception School in Newburyport. 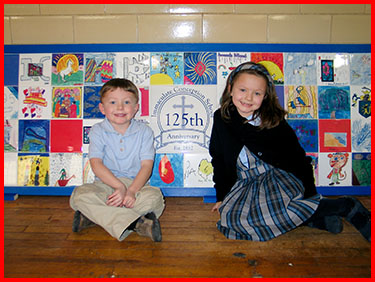 It was wonderful to celebrate the occasion with the priests and the school family. The children, wearing their school uniforms, brought the gifts up in the offertory procession and sang very beautifully. Their music program was very, very impressive. 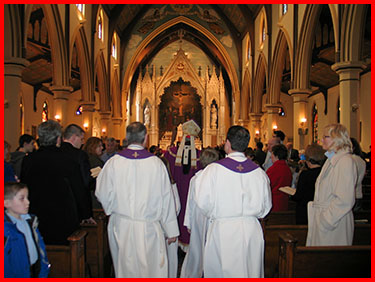 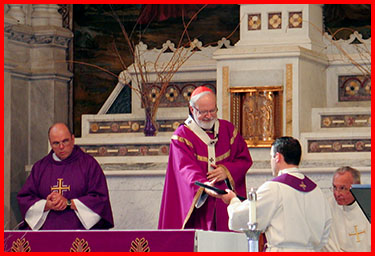 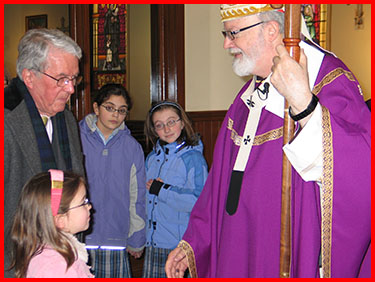 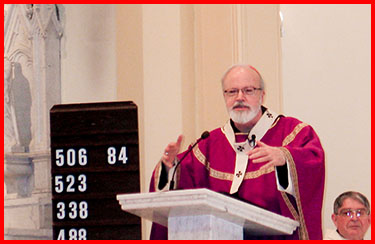 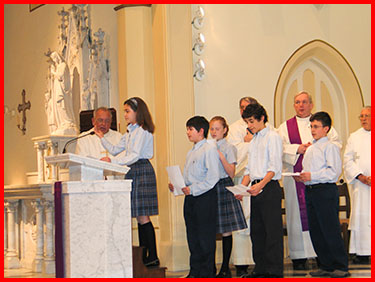 After the Mass, there was a reception in the hall, and I visited with the confirmation class. It is a very large class, taught by one of our seminarians, Christopher Carmody, who is from the parish. 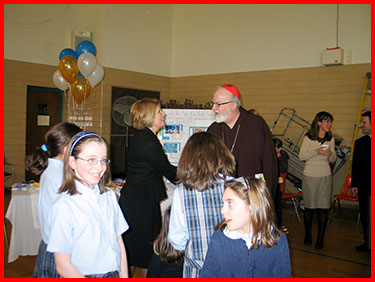 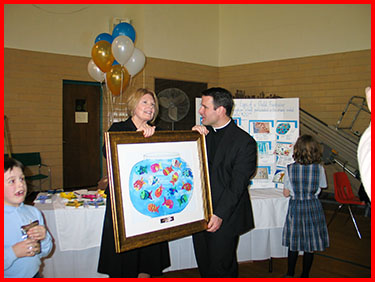 For the photo of the week, I have chosen this beautiful depiction of the crucifixion of our Lord taken at the Grey Nuns’ chapel. It is a timely reminder of the upcoming celebrations of Holy Week. 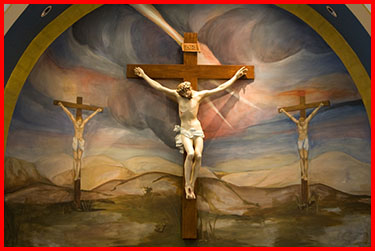