As most of you know, I post my blog every Friday. This particular Friday happens to fall on February 29 — the extra “leap day” we get in most years divisible by four. (I understand that February 29 won’t fall on a Friday again until 2036, so I’d better take the opportunity to talk about it now!) 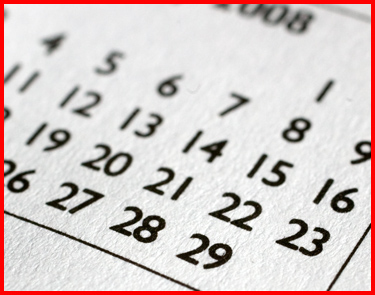 Yesterday, while browsing through news online, I came across an article in a Connecticut newspaper, the Weston Forum, that explains the origin of the leap year. The article, entitled “Who put an extra day on the calendar?” was written by Kimberly Donnelly. I thought it very nicely explained the origins of the leap year and that a pope — Pope Gregory XIII — promulgated the calendar that we still use today.

Here’s a bit of her article. You can read the rest online if you’d like:

Who makes this stuff up?

Someone had to do something in order to keep the seasons from drifting into different months. The exact length of a year — that is, how long it actually takes the earth to revolve around the sun — is 365.24219 days. That means if the calendar year were just 365 days, the seasons, which are determined by the position of the earth as it orbits the sun, would shift a quarter of a day every year. Not such a big deal, until 100 years go by and autumn is beginning in mid-August, 25 days earlier than it used to.

So, in 45 BC, Caesar decided to add a day at the end of February (back then, it was the last day of the year) every four years. 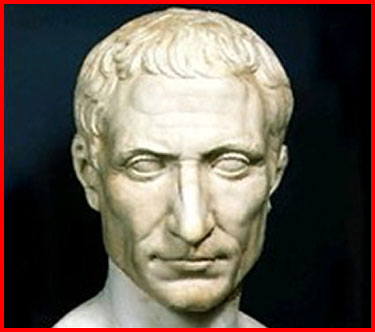 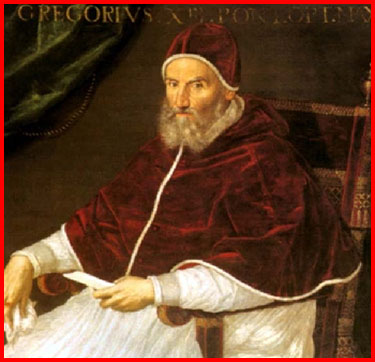 In 1582, Pope Gregory was apparently bothered enough by the shifting seasons that he decided to do something about it. In one fell swoop, he changed the end of the calendar year to Dec. 31, he left 10 days out of October, and he added the “no leap year on a year divisible by 100 unless it’s also divisible by 400” part of the rule.

I was so pleased to receive a number of comments last week from students of St. Paul School in Hingham. Our Catholic schools are a very important priority in the life of the Church. We are anxious for our students in Catholic Schools to learn about the Church, and certainly the blog gives them an opportunity to not only get to know their bishop a little bit better but also to see what is happening in the Catholic community throughout the archdiocese and in the universal Church. 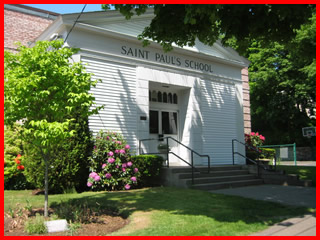 I was very pleased that they read the post and that they took the time to write. I hope they will continue to be blog readers and communicate with me through the blog.

I look forward to visit the school some day. Like so many of our Catholic schools, St. Paul was started under the auspices of the nuns, the sisters of St. Joseph, in 1951 and after was staffed by the Sisters of Notre Dame de Namour for many years. The current principal at the school, Brother Richard Lunny, CFX, used to work with us in Fall River so I’ve known him for a long time.

I wanted to share with you news about the Massachusetts Marriage Initiative, which is sponsored by the Massachusetts Catholic Conference. Their new website is already up and we want to share that with everyone in our archdiocese and beyond. I encourage you to visit and to learn more about the initiative.

The theme of the initiative is “The Future Depends on Love,” and strives to educate Catholics concerning the truth of marriage as well as empower them to make a case for it to the wider community. 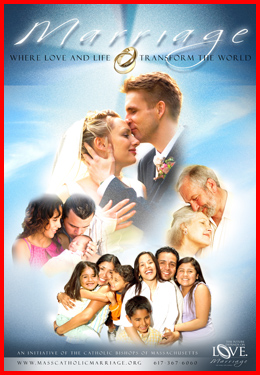 One of the crucial tasks of the Catholic Church is to help people have a sense of vocation in their lives: the vocation to holiness, to friendship to discipleship and to a particular calling in life. We realize that God is calling most people to the sacrament of marriage. Therefore, this initiate will also help our young people to have a greater understanding of the sacrament and to prepare them better to receive it in a world where fewer people seem to be getting married.

At the archdiocesan level, Kari Colella is working with a committee of people to improve our marriage preparation programs and to look at ways to offer our young people remote preparation so they have a greater understanding of this vocation of marriage. 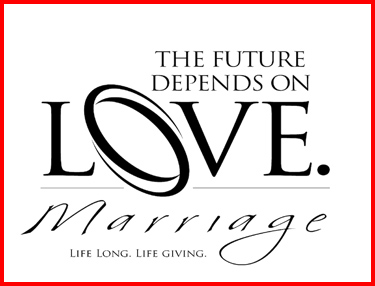 So, in fact, we have three different marriage initiatives taking place simultaneously although they are working with each other. That shows, in some way, how important we think marriage is for society and the Church.

The Pew Forum on Religion and Public Life, released Feb. 25 its survey based on interviews with 35,000 adults last year. The “U.S. Religious Landscape Survey” showed that more than a quarter of Americans have either changed religious affiliations or claim no formal religion at all. The Catholic Church in our country has been greatly affected by this, but immigrating Catholics have kept Catholics as a quarter of the American population. Certainly the study is very significant and indicates the need for a renewed effort at the new evangelization. We must mentor our own Catholics in the faith. 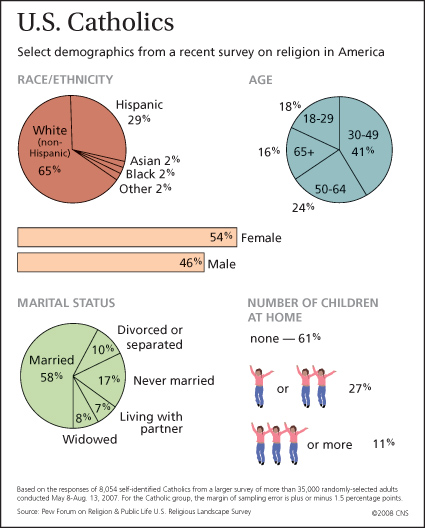 I think a great part of the problem is the difficulty of catechizing and mentoring young Catholics into the life of faith. In the past, we depended very much on cultural bonds. If someone was born into an Irish, Italian or Polish family, they were raised Catholic and identified completely with that heritage. Today, we see that people’s participation is much more intentional, which also has its advantages. The people are choosing to live their faith because of their own personal convictions and desire to live a life of discipleship, rather than just being carried along by folk religion and family customs.

This change only underscores the great importance of faith-formation and it is one of the things that the archdiocese is certainly grappling with. We have been studying the faith formation of adolescents and young adults and have formed a new office — the Office for the New Evangelization of Youth and Young Adults — in order to strengthen our efforts and help the parishes.

We must respond to the challenge of communicating to our young people a sense of personal vocation, a call to holiness and a call to a personal way of life — marriage, the priesthood, consecrated life, the diaconate and lay ministry. At the same time, we must also help Catholics understand that we have received a communal mission from Jesus Christ — to be a part of His Church and to announce the Gospel together, gathered around the Eucharist.

In today’s highly individualistic culture, people are deluding themselves into believing that the way that you live your spiritual life is highly personal and isolated from the community of faith, but Jesus came to establish a people, a Church that is His Body. Therefore, we must communicate the faith but also mentor people in the faith. It is not enough to simply pass on information; we must help people to recognize in Jesus’ Gospel is a way of life. It is a way of life that is according to God’s will and one that, if we are faithful, will lead us to eternal life and happiness with God forever. 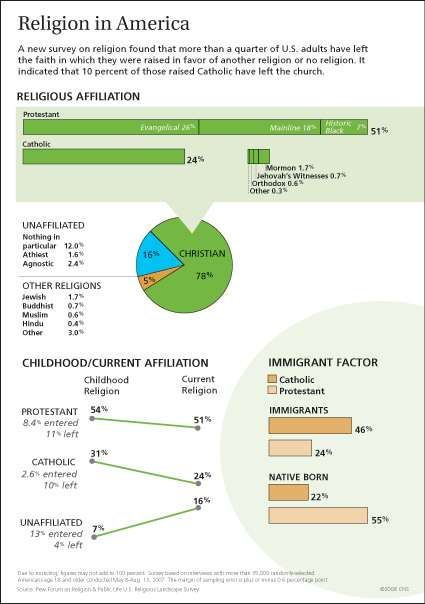 Our mission is urgent and calls upon us to work to transform this world to be a more just and merciful society where the poor and defenseless are cared for and fed. And where our human community, living according to God’s plan, reflects the values of the Kingdom that Jesus announced in the Gospel.

The study is very clear about the importance of the Catholic immigrant population here in the United States. About half of all immigrants to this country are Catholic. This has maintained Catholic participation to about a fourth of the American population, which is still a very considerable number, but does underscore a great need to be a welcoming community. We need to realize that we are an immigrant Church — today just as much as ever, and at the same time, look for new ways to evangelize our American Catholics whose religiosity is becoming less tied with their culture and more an intentional choice to be a part of the Church.

The release of this study coincides with our bicentennial year. About 200 years ago there were probably 1,000 Catholics in Massachusetts and 2-3 priests. And in 200 years the Church has grown considerably because of immigration, because of the way people have responded to the Church’s message.

Every generation has faced its challenges and opposition. Today, we continue to face new kinds of opposition in secularism and atheism. But people should not be frightened by that. Christ promised us that He would always be with us. His Church continues to grow in the world — there are now over one billion Catholics. Our challenges in the United States are great amidst a society that is very materialistic and tending towards greater secularism, that is trying to tell us to live our lives prescinding from God. The Church’s message is challenged in these circumstances, but we carry on knowing that the Lord’s grace is with us and that we have a mission to fulfill. 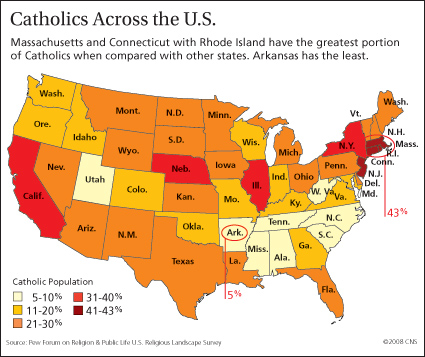 I am edified by the commitment and love that so many of our faithful people have for the Church, which we must all witness to more openly. That will also be a call for Catholics who have stepped away from the practice of the faith to feel a new excitement about their faith and to feel welcomed to reconnect with their Church.

On Saturday, I attended our annual permanent diaconate convocation with the deacons and their wives at St. Patrick Parish in Stoneham. The parish is such a beautiful church and facility for this sort of gathering.

I celebrated Mass with them, had lunch and delivered a talk. We had a conversation, dialogue back and forth. 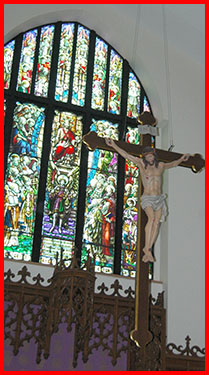 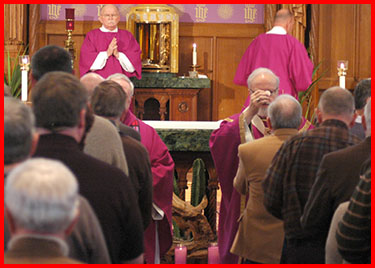 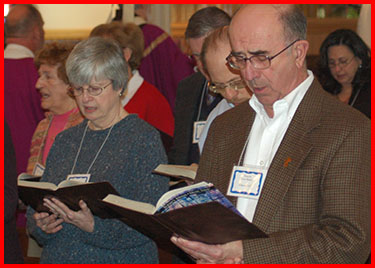 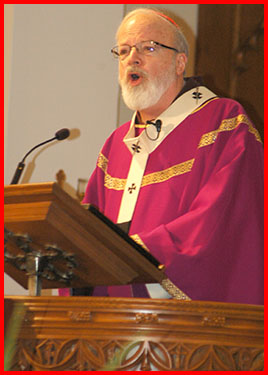 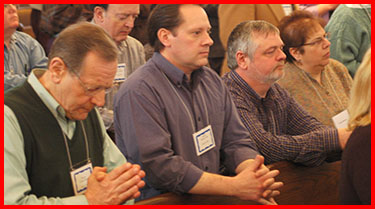 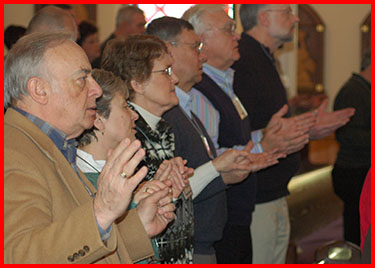 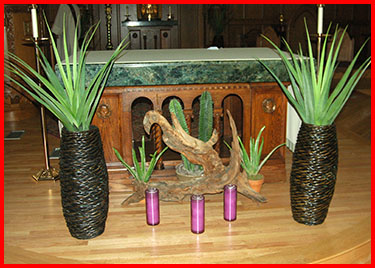 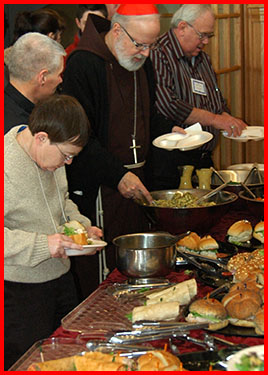 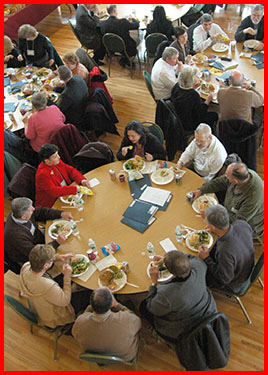 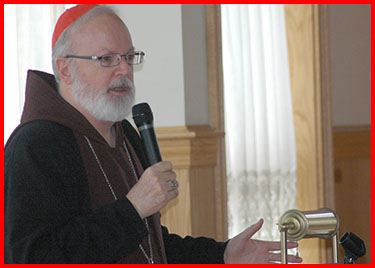 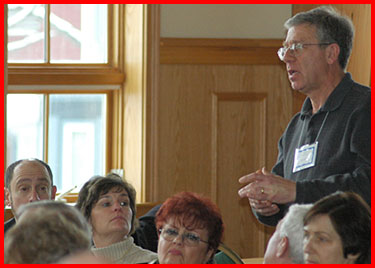 It was an opportunity for the deacons to ask questions. The keynote speaker for the convocation, Deacon Keith Fournier, is a lawyer and completing his doctorate in moral theology at Catholic University. I was very impressed by him. 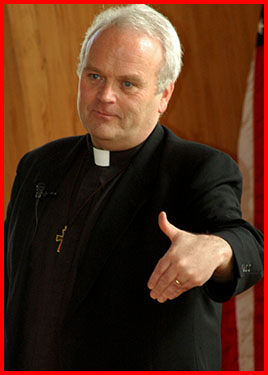 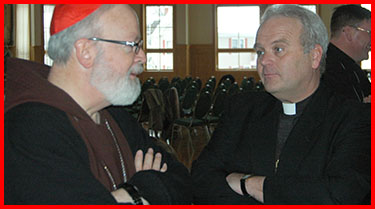 We are very pleased that Deacon Patrick Guerrini is now in the Office for Clergy Support and Ongoing Formation, working on the ongoing formation of the deacons as well as the personnel department for their assignments. It has been a big help having him on board.

The ongoing formation of our priests and deacons is critically important. Both Father Bill Kelly, the office’s director, and Deacon Guerrini are working with the deacons in this regard. As I mentioned in a post earlier this month, we are poised to begin having deacon classes every year to increase the numbers of men involved in this ministry which, going forward, is going to take on even greater importance.